HAVANA, Cuba, May 2, 2017 —  For some, the most important figure in the history of Cuba is Jose Marti, the writer and philosopher who inspired the fight for independence from Spain in the late 19th century.  Others would pick the Castro brothers — the late Fidel and today’s President Raul — who led the revolution in 1959 to overthrow a dictator and subsequently move the country into communism.

But when you visit here now, you see crowds flocking to John Lennon Park in a nice section of the capital city of Havana, to sit on a park bench next to a life-size statue of the former Beatle, getting their photos taken.  I don’t believe John Lennon ever traveled to Cuba, and I’m certain the Beatles never performed here.

So, why is there a statue of Lennon here, and why is that a big deal?

It represents very significant change that is happening in this land of 11.2 million people. 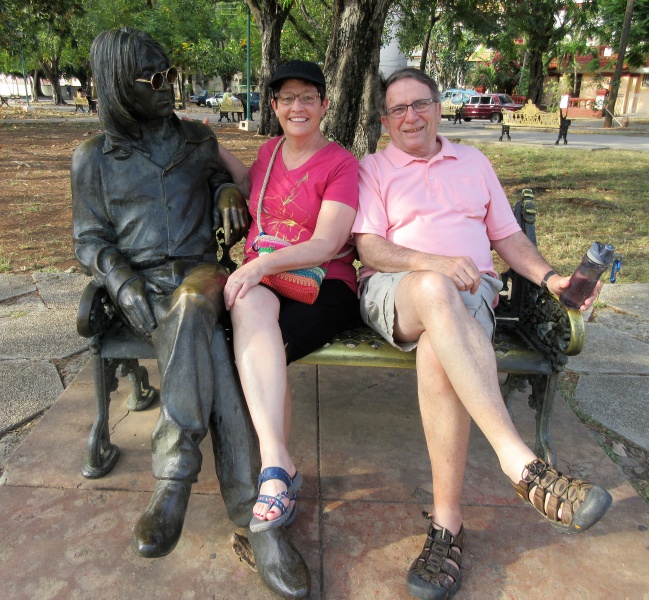 Stan Dotson, the former Baptist minister, college professor and wannabe musician from Asheville, N.C., who recently guided a group of 12 of us from Plymouth United Church of Christ in Des Moines on our first trip to Cuba, told us the story.  In about 1963, when Beatles mania swept the world, their music was banned from Cuba.  Fidel Castro, then with the title of Prime Minister but already the supreme ruler, dismissed the British rock band’s music as a “bad bourgeois influence,” especially on young people.

If you try to ban young people from experiencing something, you know what happens.  Predictably, Beatles music became “like forbidden fruit,” said Dotson, who has traveled to Cuba more than 30 times since the late 1990s.  For decades, kids played boot-legged records, tapes and CDs of the Beatles, and eventually the kids became adults and are still playing their Beatles music.  By the year 2000, Castro, then 74 years old, decided to make things right. He formally rescinded the Beatles ban, had John Lennon Park built, including the impressive statue of Lennon.  At a dedication ceremony, Castro sat next to John Lennon’s son Julian, also a musician, and afterward the Cuban leader praised the Beatle to the press: “What makes him great in my eyes is his thinking, his ideas.  I share his dreams completely. I too am a dreamer who has seen his dreams turn into reality.”

The earlier ban?  Oh, Castro said, that had been one of a few “errors of the revolution” that occurred.  It took 30 years for the Cuban government to start admitting such errors.  Another significant one was the regime’s suppression of religion, which ended in the early 1990s. 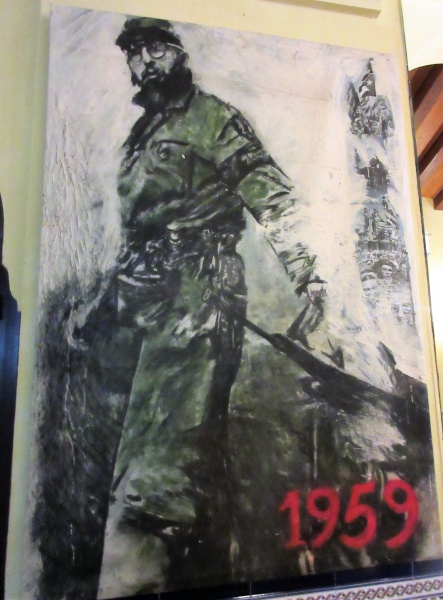 A handsome painting of the revolutionary Fidel Castro that is featured in one of the lobbies of the Hotel Nacional in Havana.

Now we may be seeing another big correction.  Cuba and the United States, which threatened each other with nuclear war in the early 1960s, are now seeking to normalize relations.   President Raul Castro and then-U.S. President Barack Obama made that announcement in December, 2014, saying they’d been lobbied individually by Pope Francis to end 58 years of strain and conflict between their nations.

All kinds of people-to-people exchanges have been encouraged — cultural, business, athletic, religious and more.  That’s what our trip was March 29-April 6.  We were spending time with the people of Ebenezer Baptist Church in Havana, now the “sister church” of Plymouth Church in Des Moines.

Two things seemed clear to me after eight days here:

–There is great opportunity in Cuba for Iowa, our people and our companies, especially in agriculture.  As former U.S. Secretary of Agriculture and former Iowa Governor Tom Vilsack told us in Des Moines before our trip, Cuba imports 80 percent of the food its people consume, and currently none of those imports come from Iowa or the U.S.  Not only could we be helping them by shipping our food products, we could help them increase their own production with our equipment, technology and agronomy.  For Cuba, opening markets in Iowa and the rest of the U.S. would trigger a revitalization of their sugar, cigars, rum-making and other industries.  And I think Cuba would quickly become a favorite vacation destination of Iowans.

–Before that can happen, Iowans should be leading the effort to persuade U.S. leaders to end our nation’s embargo on trade with Cuba.  Most Americans are totally unaware of it.  But the embargo has been U.S. policy since the fall of 1960, right after the Cuban revolution, when it was ordered by the administration of President Dwight D. Eisenhower.  President John F. Kennedy expanded it two years later.  The embargo certainly failed at forcing Cuban regime change, which was a goal when it was first imposed.  Cuban purchasing simply shifted away from American companies to suppliers in Mexico, Venezuela, Brazil, the former Soviet Union and many other nations.  It is time to end the embargo and resume full trade with Cuba, and there is almost unanimous support for such a change in the agriculture industry in Iowa and across the U.S.

So, assuming that there will be much more interaction soon between Cuba and the U.S., what do we need to learn — or learn again — about the island nation that is just 90 miles from American land? 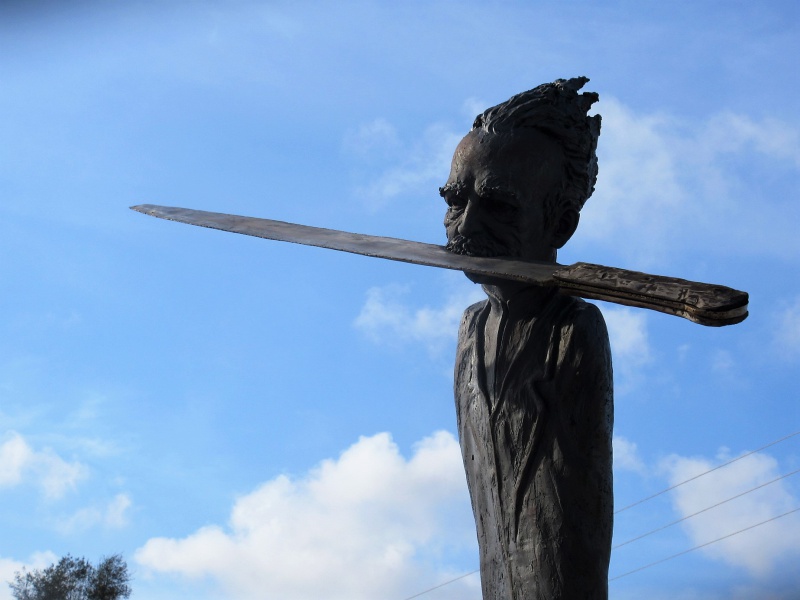 A towering sculpture of Cuban independence leader Jose Marti with a machete in his mouth. The totem-like sculpture is by famed Cuban artist Osmany Betancourt Falcon, called “Lolo,” and is in front of his studio and gallery in the city of Matanzas.

The day after we arrived, our hosts at Ebenezer Baptist Church gave us an excellent one-hour quick-course in Cuban history and culture, presented by a college physics teacher, a mechanical engineer, a dance instructor, a college student in accounting & finance, with the three pastors coming and going as their schedules allowed. They really helped us recognize and appreciate all we saw and experienced for the next week.

The country, they said, was originally populated by Aboriginal people, who greeted explorer Christopher Columbus when he “discovered” their home in 1492. The Italian was exploring for the Catholic leaders of Spain, which sent troops and colonists in the 16th and 17th centuries, and they overran the natives. That set up what our hosts characterized as five major periods of Cuban history:

–The “colonial period,” with Spain in control, lasting until about 1898.  More than 1.3 million slaves were imported from African nations to help build Cuba and, eventually, work its sugar, fruit and tobacco plantations.

–The “republic period,” during which the new Cuban nation ruled itself, often with “puppet presidents” endorsed by the U.S. government and American business interests. The Mafia brought in fancy casino hotels.  As affluence grew in the U.S. and other areas of the world, tourists began traveling by sea and by air to new resorts along the Cuban beaches. This lasted until the overthrow of the Fulgencio Batista dictatorship, completed in late 1958. Batista was a popular Cuban president when he was first elected in 1940 to serve four years, but then he was defeated. He returned from 1952-’59 as a U.S.-backed dictator and he ultimately lost his own people.

–The “revolutionary period” evolved during the 1950s, starting in 1953 with guerrilla-like raiding parties led by the Castro brothers, who’d come from the eastern part of Cuba. They initially called themselves “socialists” and wanted to end exploitation of Cuban workers by companies from “imperialist” nations.  Their goal was free healthcare, universal free education, banishing or suppressing religion and new international alliances with nations that had strong workers’ movements.  While the fighting went on nearly six years, there were not huge battles.  Most of the fighting was in street riots in urban areas and raiding parties coming down out of the hills to take over strategic rural installations. When Batista fled the country in December, 1958, the Castros, their lieutenants Che Guevara and Camilo Cienfuegos, and other young revolutionary leaders became international heroes. In the 1960s and ’70s, Cuba strengthened its ties to the old Soviet Union, which became Cuba’s major supplier of oil, manufactured goods, food, military equipment, construction and more. Rev. Raquel Suarez Rodes, one of the Ebenezer pastors, said it was “a very harsh model of Stalinism (that) was imposed on Cuba” in that period. 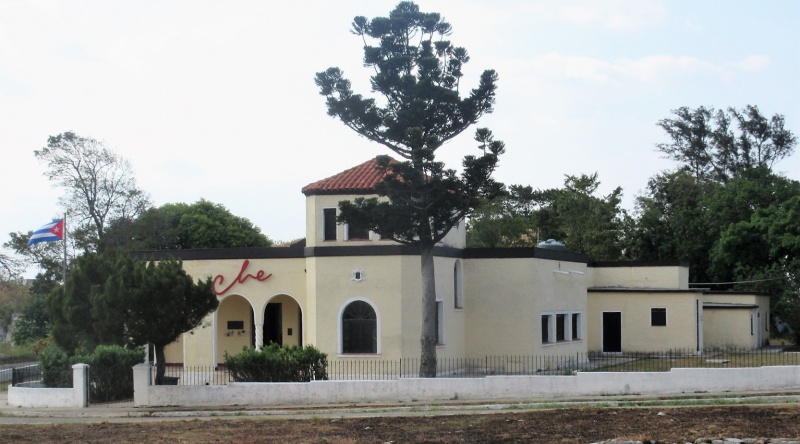 From about 1955 to 1965, this bluff-top house overlooking the harbor and historic city center of Havana was the home of revolution leader Che Guevara.  It is now a museum.

–Some would say that the “revolutionary period” continues to the present time.  After all, Raul Castro is president. But there was drastic change that came to Cuba after the fall and dissolution of the Soviet Union in 1990-’91.The Cuban economy, without the supplies from the Soviets, essentially collapsed. And that brought on what is now known as the “Special Period.”  The government had to seek new foreign investment, including rebuilding the tourist industry that had dwindled.  Many of the big state-owned and state-operated collective farms were broken up, with smaller amounts of ag land given to “cooperatives,” which produce for their members.  As economic gloom deepened in the ’90s, Fidel Castro accepted counsel from a few pastors he trusted — including Ebenezer Baptist’s pastor then Rev. Raul Suarez — to end the religious discrimination and let people find new hope in church life.  Castro even led an effort to make Christmas a national holiday again.  After suffering in the global economic crisis of 2008, the government went farther — incenting the start-up of small, privately-owned businesses.

–All of the economic problems helped President Raul Castro, who took over in 2006 when Fidel’s health broke, decide in 2014 to move Cuba into an era of new relations with the U.S.  Americans and Cubans alike are now nervously awaiting signs whether new President Donald Trump in the U.S. will continue the normalization that his predecessor President Obama began.  And there is just as much wondering what position President Castro’s successor in Cuba will have on all this.  The 85-year-old Castro is expected to hand-off leadership after this year, and Cubans I met had no consensus who will succeed him. 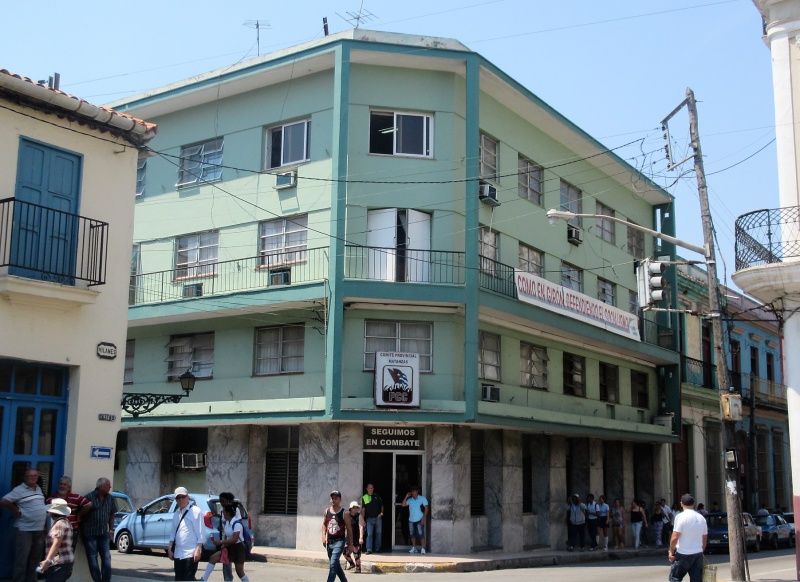 The provincial headquarters of the Communist Party on one corner of the city square in Matanzas.

The Cuba that has evolved through all this is very diverse in race, ethnicity, spirituality and nearly every other measure. With excellent free health care, the older population is growing rapidly.  With the allure of other nations with stronger economies, many younger people consider leaving.  Our friendly history instructors at Ebenezer Baptist quoted Cuban anthropologist and writer Fernando Ortiz Fernandez, who in the 1950s and ’60s said that his home country had already become “a melting pot that holds a soup for which you throw in many different ingredients.  It’s a very rich soup.”  He also referred to “trans-culturation” happening here, with “different cultures coming together here, mixing and starting to form a new culture.”

Also consider the dramatic changes Cuba has undergone in the past century or so.

“I think we have a culture of free-thought that is very anti-imperialist and revolutionary,” said Rev. Amos Lopez Rubio, another of the Ebenezer pastors. “That’s been part of the Cuban thought process since liberation from Spain in the late 19th century.  It’s interesting to incorporate Christianity into that.  But many leading Cuban thinkers were religious leaders, and they’ve led us to what we think of today as liberation theology.”

Maybe that’s why the place seems so alive.

To read the first story after the trip that Chuck Offenburger wrote on April 15, click here. 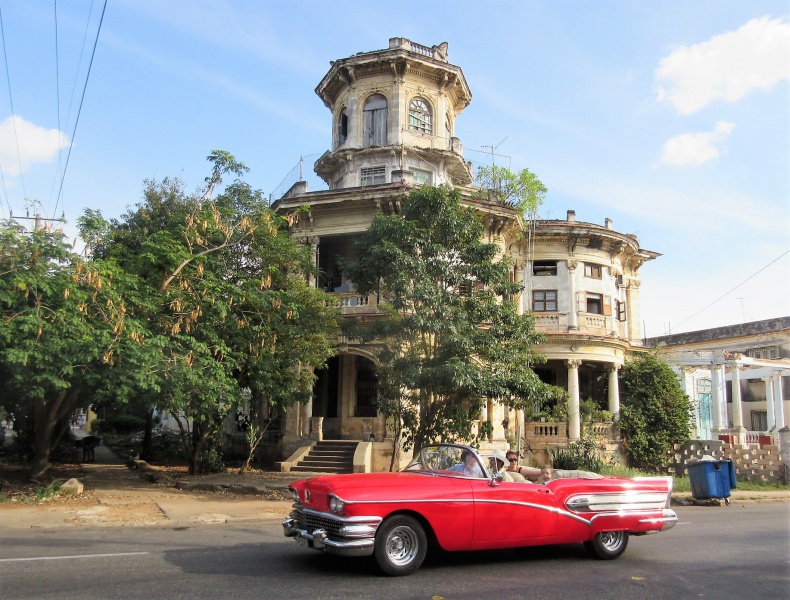