CARROLL, Iowa, August 4, 2017 — Two months and two nights ago, the Storm Lake Whitecaps and the Carroll Merchants faced each other in the opening game of the new Pioneer Collegiate Baseball League right here in front of an overflow crowd of 1,100 fans in historic Merchants Park.  Tonight, the same two teams finish the season in the same place in the 5-team league’s championship game, at 7:05 p.m. and the crowd might even be bigger.

“Carroll has been incredible,” said Zak Larken, the Merchants field manager who has been an assistant baseball coach at Truman State University in northeast Missouri but is now moving on as an assistant at Lewis University in Chicago. “This community has welcomed all of us with open arms. On night one, we had that crowd of 1,100 people, and most of our guys had never played in front of a crowd that big.  We’ve put on these free baseball clinics for local kids on Tuesday mornings, and we’ll have 70 to 80 of them show up. They love their baseball here.  Our guys will be telling people about Carroll, Iowa, for the rest of their lives.”

Between the season opener and the championship tonight, a whole lot of baseball has happened in Carroll, Storm Lake and little Bancroft across northwest Iowa, as well as in neighboring Albert Lea, Minn., and Sioux Falls, S.D. 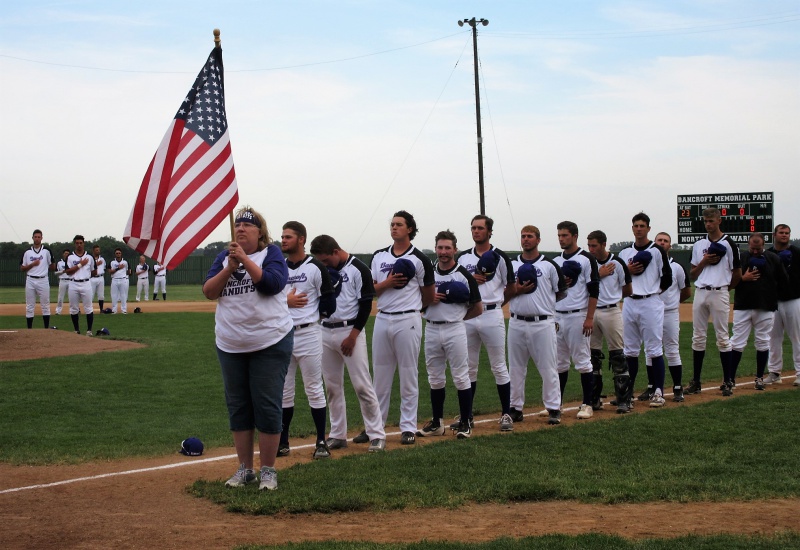 Bancroft city clerk & director Crysti Neuman, who also served as the roaming, microphone-wielding host of the games in her town, is shown here leading the Bandits during the National Anthem in a game earlier this summer.

The teams have been made up of about 100 good college players from coast to coast and border to border in the continental U.S., as well as one from Hawaii and a few from the Caribbean.   A few came from NCAA Division I programs, more from Divisions II and III, several from NAIA schools and community colleges.  A couple of players just graduated high school before they came to Iowa, usually with at the direction of their eventual college coaches and with permission slips from their parents.  They are not paid for playing.  About half of them have held part-time jobs.

Most stay in host homes in the communities, with the hosts offering food and accommodations free to the players. Bancroft banker Charlie Kennedy and his wife Ellengray hosted outfielder Greg Brown of Ohio Dominican University and left-handed pitchers Jacob Gilmore of Illinois State and John Schultz of Oregon Institute of Technology. “We told them when they left the other morning that if they would let us adopt them, they could stay forever,” Charlie Kennedy said. “This was a wonderful experience for us. It was like having your own kids back with you again.”

The quality of play has been excellent, the competition has been even. Carroll topped the standings after the regular season at 18-13, with a one-game lead over Storm Lake and a two-game lead on Sioux Falls.  Bancroft’s regular season was 14-16 and last-place Albert Lea was 11-19, but all these teams could beat each other — and did frequently. 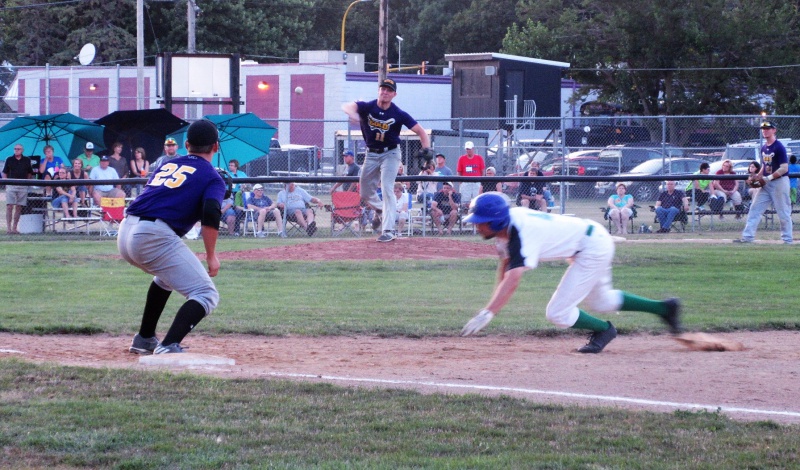 A Storm Lake runner appears to be in trouble at first base during a game with the Sioux Falls Gold earlier this week in Storm Lake, but the first baseman mishandled the pick-off attempt.

It has really been fun to follow league play, like Carla Offenburger and I did.  After having a great time at a game in Bancroft in early June, we decided we’d do the circuit and see a game in all five league towns.  (You can read my Bancroft story by clicking here.)

We took our fold-up bicycles along, cruised the communities, visited the tourist attractions, sought out recommendations for local restaurants we needed to try, enjoyed running into a few old friends and making new ones all along the way. We’ve loved running into parents of the ball players, couples who have traveled to Iowa from great distances to spend a weekend watching their favorites.

We’ve seen a few minor hiccups in team operations along the way, but overall, the idea of having a summer college baseball league across rural Iowa and beyond looks to us to be a rousing success.

This isn’t just baseball happening here, you understand.  This is economic development and tourism.  It’s probably never going to be a huge financial success, but it can certainly more than break-even.  And the payoff could be huge for hosting 100 or more bright, energetic, high-achieving young people from across the nation for a summer, luring their friends and families here, and having them all tell stories about their experiences for decades to come.

We’re thrilled to hear Donnie Roberts, who owns four of the five league teams, that his teams will all be back in their communities again in 2018, and that he “is pretty sure” he’ll be adding “at least one more team in Iowa, maybe two” next summer.  He is in discussion with communities now and anticipates making an announcement by Sept. 1. 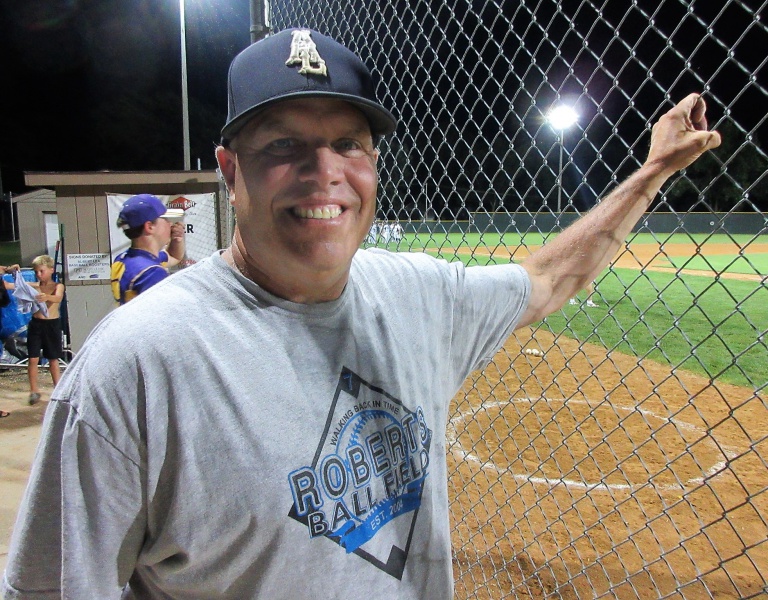 Roberts is a 51-year-old Wisconsin dairy farmer, pipeline worker and baseball entrepreneur who has learned, just like it said in the movie “Field of Dreams,” that “if you build it, they will come.”  He started by building a classic ball diamond on his farm outside Spooner, Wis.  Now he’s building college baseball programs that make summer nights fun in the rural Midwest. He started the Carroll and Bancroft teams last year, and this year added Storm Lake and Albert Lea.

I told him I can’t even imagine what it must take to keep up with all the logistics of hiring coaches, getting the team uniforms and equipment all ready, buying buses and keeping them running, scheduling drivers and umpires, working with communities to provide concessions, entertainment, volunteers and more — all while he’s traveling constantly between his Wisconsin hometown and the league towns.

“I’m a driven person, which I have to admit is kind of a two-edged sword,” Roberts said. “I can get a lot done — I can persevere through a lot of challenges — but it can be awfully hard on the people closest around me.  We do have fun at it. Do you see that excitement we help create in the communities?  That’s fun.  And it’s a different kind of fun in the way we work together to figure out ways to get some things done with people.”

He said he considers this 2017 season “a very good year, baseball-wise, good players and coaches, good quality of play. I’m quite happy with the attendance.  We had that big opening crowd of 1,100 in Carroll, and most of the teams would get 200 to 300 at their games, sometimes more on the weekends.” 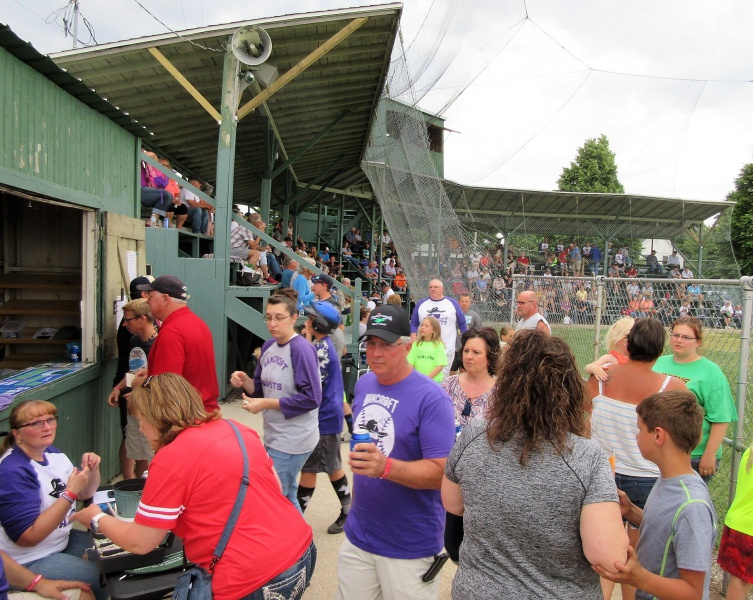 Good crowd on a week night in little Bancroft in mid-June.

“It’s also been good year of learning for me and everybody else involved.,” Roberts continued. “There’s a lot of stuff we’ve worked through and learned from.  Now that we’re getting the season finished up, we’ll take a few days off and then get back to it.  We’ll go over our business plans, make some improvements and be ready for 2018.”

He said that “financially, we’re O.K.  You’ve got to expect in a beginning business that your first couple of years are going to be tough before you can really get rolling. You have to go through some lean times.  And in this particular business, the idea is never going to be to make a lot of money.  You don’t want to have a huge loss, for sure, but you don’t expect a huge gain.  For right now, we’re holding our own.”

And what do the players think?

“I’ve had a really great time out here,” said Tyler Buchanan, a pitcher for the Carroll Merchants who is from Jacksonville, Fla., and plays for Shorter University in Rome, Ga. “It’s been really awesome to see how this community of Carroll turns out for us.  I’ll tell you, every time we’ve had a chance to give back, I’ve done everything I can to say ‘thank you’ to the Carroll people for all they’ve done for us.” 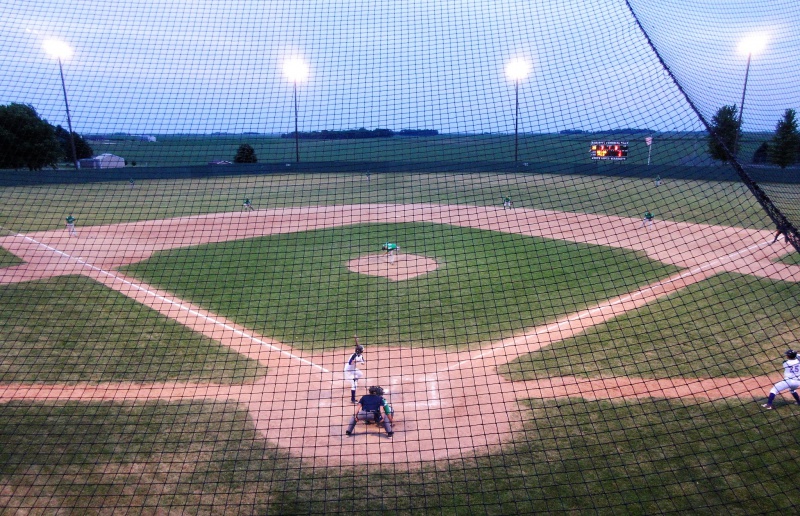 Bancroft Memorial Park, with cornfields just beyond the outfield fence.

Jacob Gilmore, one of the pitchers who lived with the Kennedys in Bancroft, said coming from a town of 100,000 — Bloomington, Ill., which is his hometown and also where he plays at Illinois State — to play ball in a town of 732 in very rural Iowa was “pretty different. You learn real fast that everybody knows everybody.

“But our team really bonded well together in Bancroft, and our host parents were incredibly good to us,” Gilmore continued. “So I’m going back to my college teammates and definitely recommending this experience.  This league is a great place to get in a whole lot of innings over a summer, and the community support is amazing.”

Larkin, the Carroll manager, said “it’s been great, especially for being the first year of the league.  If you take a step back and just think about all the things that had to happen — the teams, the facilities, the volunteers — it’s amazing to think what’s happened here in a very short time. That tells me and a lot of other people that this market is really strong for baseball like this.” 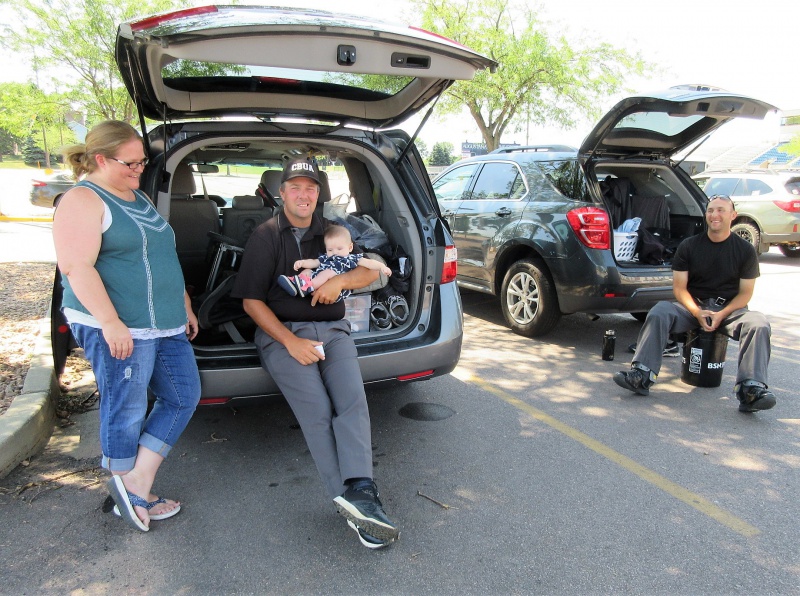 One of our favorite moments during the Pioneer Collegiate Baseball League season. Just before a game in Sioux Falls in mid-July, we noticed umpire Mark Zalme cuddling his infant daughter Wrigley (“yes, just like the Field”) while mom April Albertson looked on, and umpiring partner Matt Sisk was getting a real kick out of it. The Zalme-Albertsons are from Sioux Center, Iowa, and Sisk is from Sioux Falls. 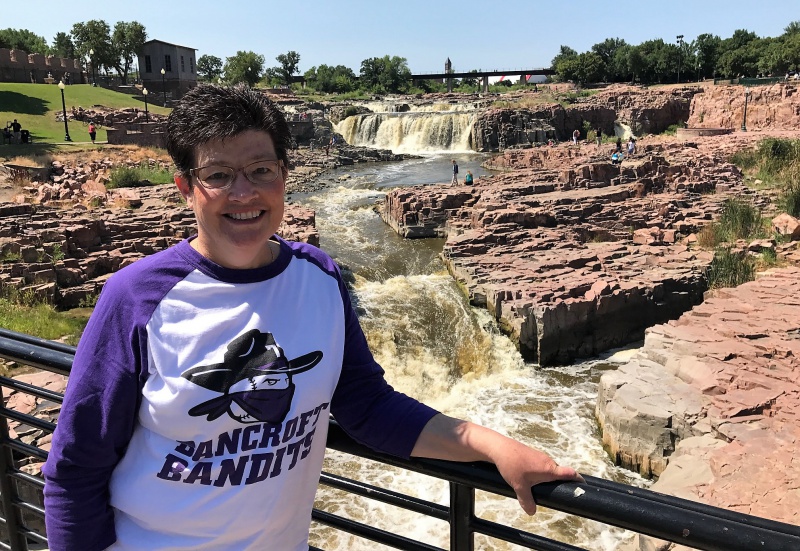 Speaking of Sioux Falls, after spending a quick day there for a game, Carla Offenburger and I felt like idiots that we’ve never made a longer visit to that lively metro area of 250,000 people.  There is so much to see and do, starting with the required visit to Falls Park, where Carla is shown and where we picnicked pre-game. 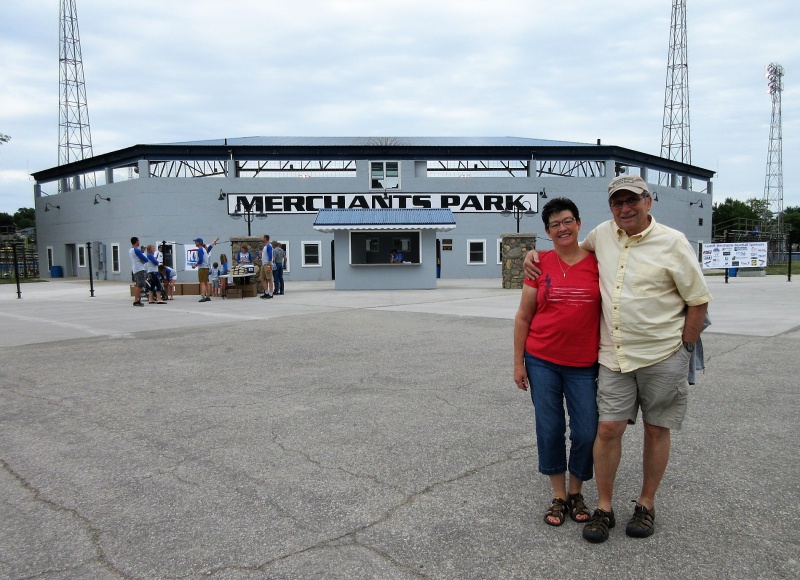 Here we Offenburgers were in late June, headed into historic Merchants Park in Carroll.  The Pioneer Collegiate Baseball League’s season ends tonight, Aug. 4, with its championship game there.  The community of Carroll did an $850,000 renovation on the 68-year-old stadium, and completed it just in time for this season to begin. It is now once again one of the finest ballparks in Iowa.