BOONE, Iowa, March 29, 2018 — It was in this same week in 1994 when, over lunch in downtown Des Moines on a Tuesday, the discussion turned to “has there been some specific place you remember as having a profound spiritual experience?”  My great pal Chuck Corwin jumped on it.  “Chapel Point up at the Y-Camp” northwest of Boone, he said.  He’d ridden a train to summer camps there as a lad in Des Moines.

“When you’d climb the steps up to Chapel Point, they had log slabs on the trees you’d pass on your way up, and on those logs they had carved or painted the words of the hymn, ‘This Is My Father’s World.’ And when you got to the top of that hill, from that outdoor chapel there you were looking out over the Des Moines River valley. I remember it as one of he most beautiful views I’d ever seen. It was like, ‘There really must be a God in heaven for something like this to be here.’ I remember it as the first real spiritual experience of my life.”

The next day, which was Wednesday of that Holy Week, I drove to northwest Iowa to interview for a column in the Des Moines Register.  On my way home, I glanced at my map and saw that I could easily drive into the camp owned and operated by the YMCA of Greater Des Moines.  So I did, asking a few construction workers who happened to be at the camp to point me toward Chapel Point. I made the climb, and saw and felt exactly what Chuck Corwin had described.  I drove on to Boone, called Corwin from thre and said, “Guess where I’ve just been?”

Thus began an annual tradition for the Corwins and Offenburgers that on Wednesday of this year’s Holy Week, we observed for the 25th time.  But it was different this time.

Most notably, we were without our leader Chuck Corwin, who died last June.  As I told our small crowd Wednesday, I’m still grieving Chuck’s death, but I never grieve for long.  After all, he led a long, good life and he was such a character — always doing hilarious stuff — that I always wind up smiling, if not laughing out loud, when I think of him.  I’ll never forget this well-dressed, very successful insurance executive going into great detail demonstrating for us how you can blow up a marshmallow “Peep” in a microwave oven!

Our gathering this week was also different in a happy way. Two years ago when we were at the Y-Camp, we noticed the log slabs with the words to “This Is My Father’s World” were tattered and some were missing. Chuck and Ellen Corwin, Carla Offenburger and I launched a fund-raising effort to gather about $2,000 to have new signs made for the Chapel Point staircase.  After her husband’s death, Ellen decided to use part of his memorial money to complete that fund drive.  She sought out an expert woodworker Harold Haines, of Des Moines, who did a fantastic job on them — and the new plaques were up on the trees for us on this visit.

We may have a special celebration of the completion of that project later this spring, and I’ll share the details when we know them.

The group that gathers during Holy Week has grown over the years.  Initially, it was just the Corwins and we Offenburgers.  Up at Chapel Point, we’d each offer a spiritual reflection, observe the beauty (although a few times there has been rain or snow), read some favorite Bible passages and sing “This Is My Father’s World.” That led to us naming the group the “Maltbie D. Babcock Society,” after the hymn’s composer.

Over time, after I’d written about our Chapel Point climbs, we had family members and friends asking to join us.  Then Dave Sherry, the executive director of the Y-Camp, adopted us — which was great because he talked camp food service director Eric Jaeger to make dinner for us.  Now, others from the YMCA staff often join us, along with several people who have been longtime supporters of the organization and its camp.

You can learn more and experience our most recent gathering in the photos and captions below here. 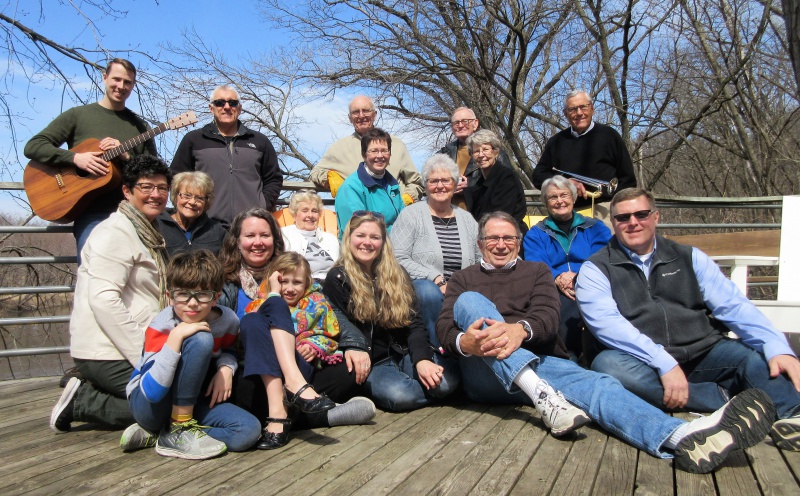 This year’s gathering of the “Maltbie D. Babcock Society” on Wednesday of Holy Week, March 28, at the Y-Camp outside of Boone, where we celebrated spirituality, friendship and springtime.  And of course we sang “This Is My Father’s World,” written by Babcock, always the favorite hymn of both our late friend Chuck Corwin and of Carla Offenburger, too. 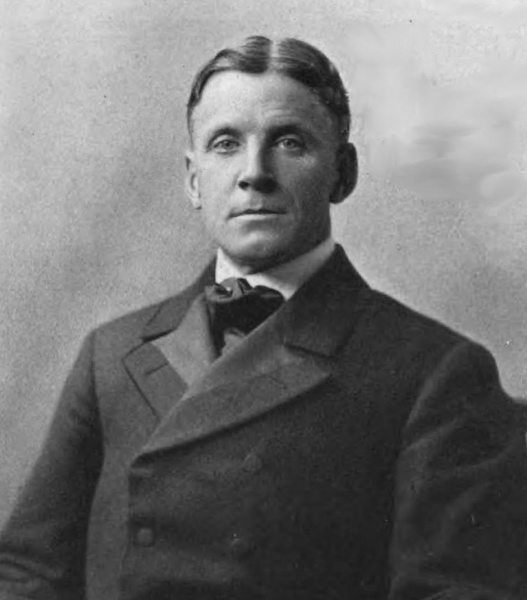 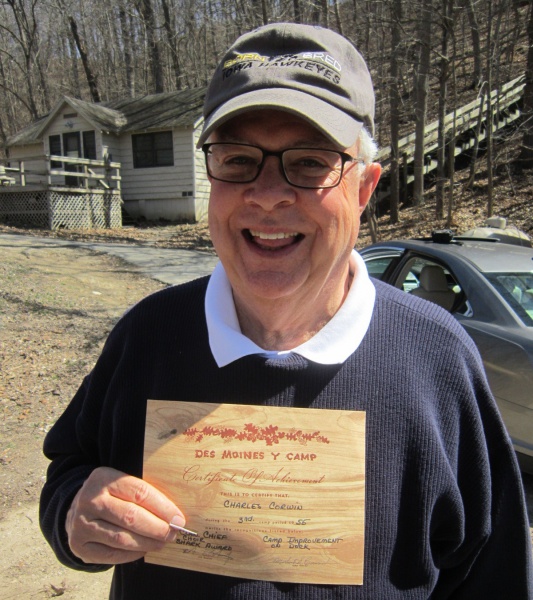 Our leader, the late Chuck Corwin, shown at the Y-Camp in 2015 with his certificate from his 1955 stay at the camp. He died last June. 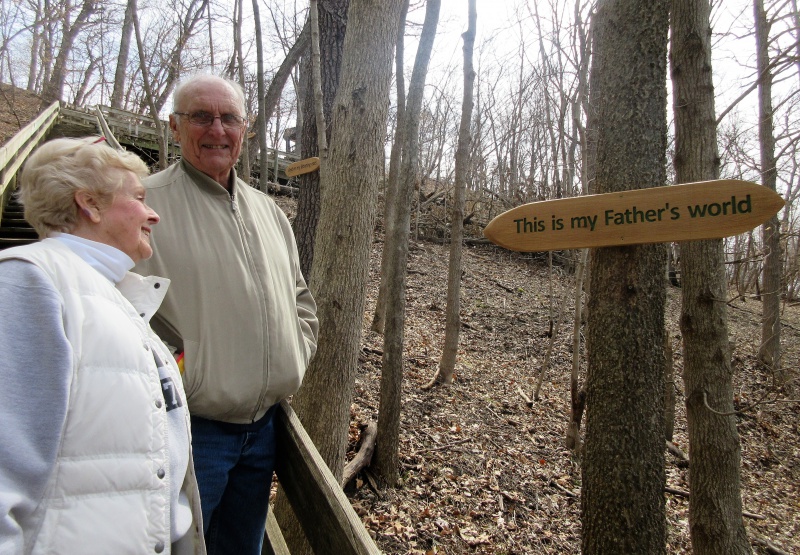 For more than 70 years, the words of two hymns have been posted on wooden plaques going up and down the stairway to Chapel Point at the Y-Camp.  Some of the weather-worn plaques had fallen and were lost. So two years ago, our Babcock Society set out on a fundraising campaign to have new plaques made.  Ellen Corwin used some of Chuck Corwin’s memorial money to complete the fund drive. And she hired outstanding woodworker Harold Haines, of Des Moines, to make new plaques from white oak wood, with the words of the hymns routed into the boards.  Here, Ellen and Harold are shown at the first of the plaques going up the stairs. 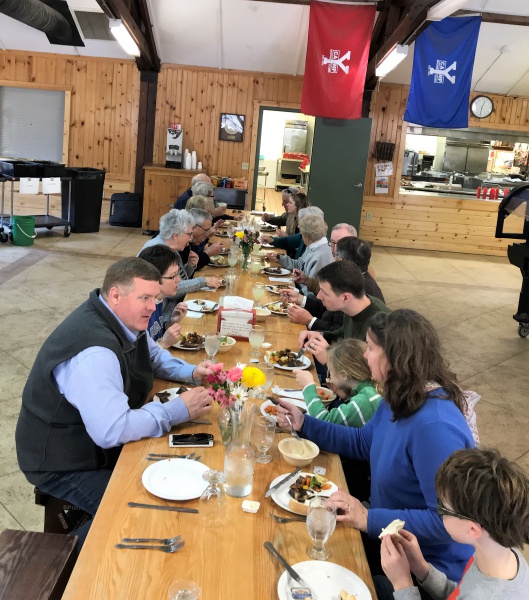 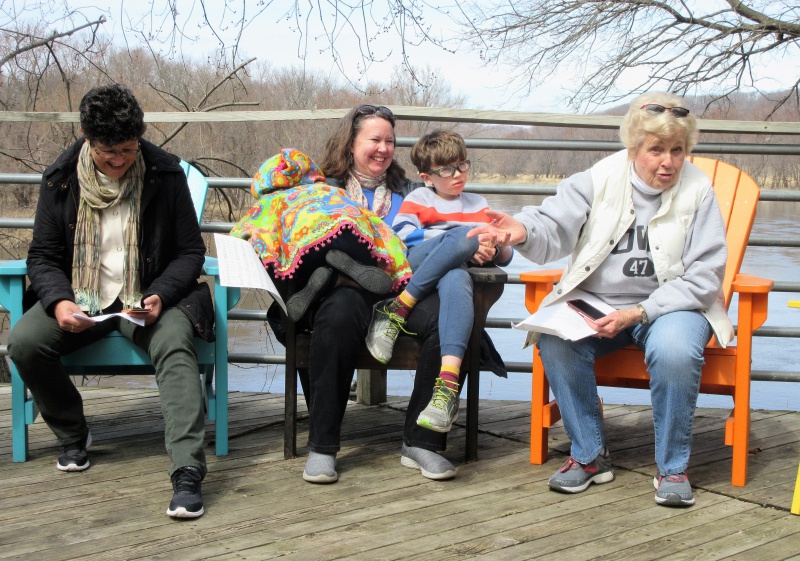 After our meal, we have a “service” at one of several spots at the Y-Camp, depending on the weather. The gorgeous weather March 28 let us gather on old Chase Lodge deck’s, which hangs right over the Des Moines River. There the storytelling began, as you can see.  Ellen Corwin (right) is telling this one, with Carla Offenburger on the left and Ellen’s daughter Jenn Trautvetter in the middle, holding her kids Charlotte and Nathan Trautvetter.  The Trautvetters were visiting from Chicago. 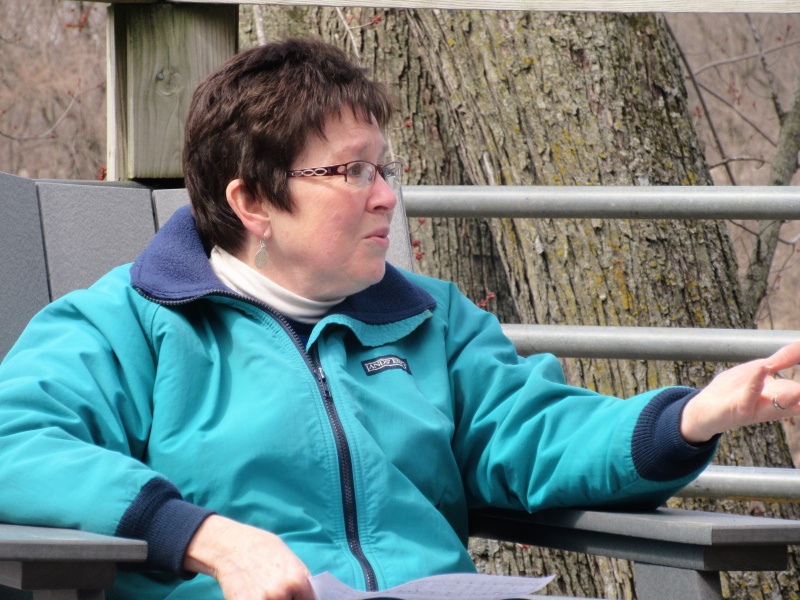 Longtime Corwin family friend Martha Gelhaus, of Des Moines, was with us for the first time at the Y-Camp, and jumped right in with a favorite story and spiritual reflection. 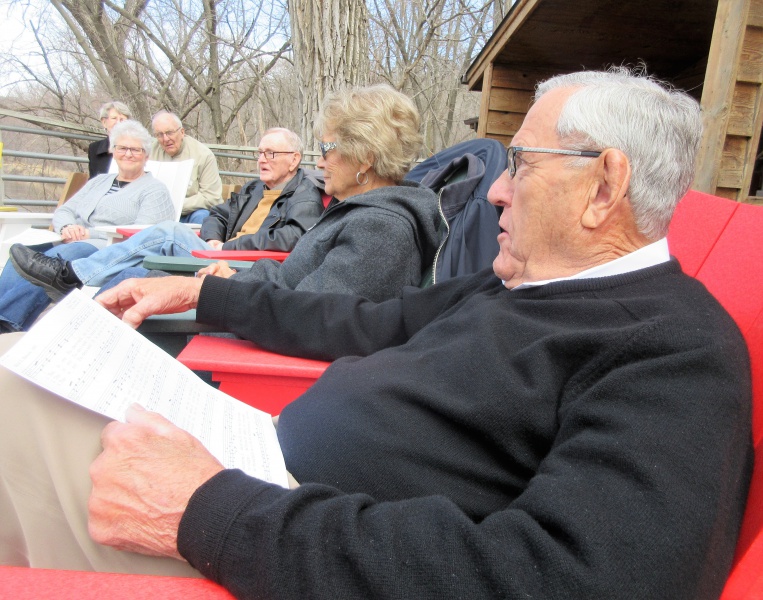 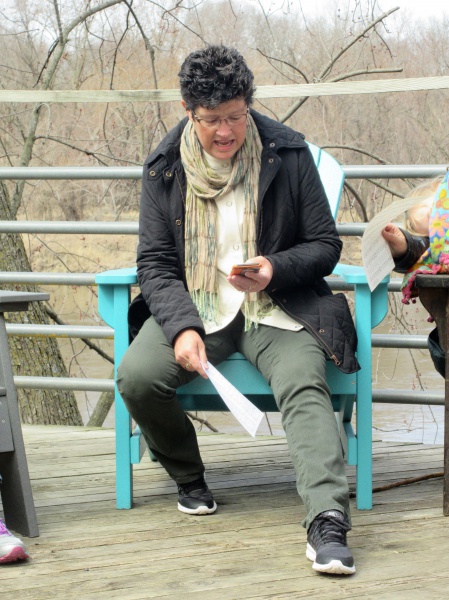 Carla Offenburger doing the traditional sharing of her favorite Bible passage. “It’s Philippians, Chapter 4, 1-13,” she explained. “These verses are jam-packed with messages about being good, thoughtful people — being grateful, doing what is right — and how you can do all things through Him who strengthens us. What’s not to like about all that?” Chuck Corwin always read his favorite Bible passage, too.  He called it “the RAGBRAI scripture” because it’s the one about “the mountains will be made low and the valleys will be raised.”  So at this gathering, Ellen Corwin read that one for him. 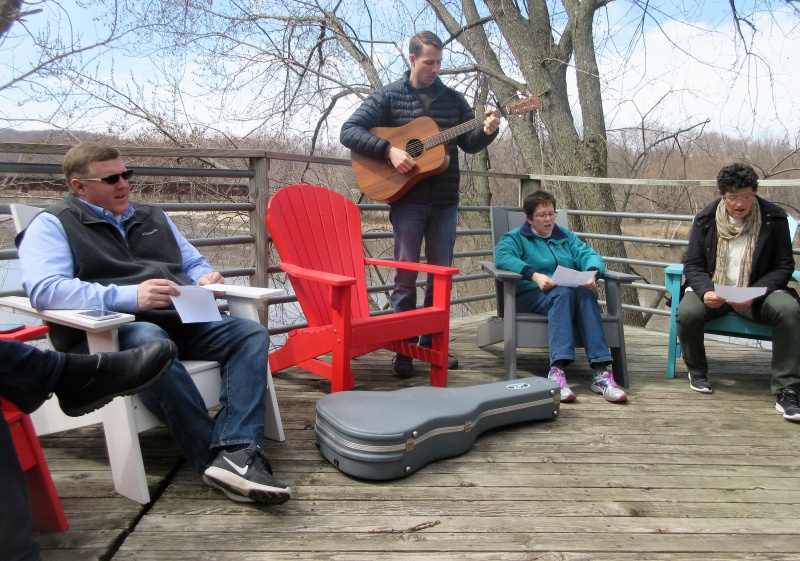 Alex Kretzinger, program director at the Y-Camp, brought his guitar to accompany our traditional singing of “This Is My Father’s World.”  He is a good singer, and the music has certainly improved since he joined our gathering. He said he brought the guitar this year “to raise the bar a little.” 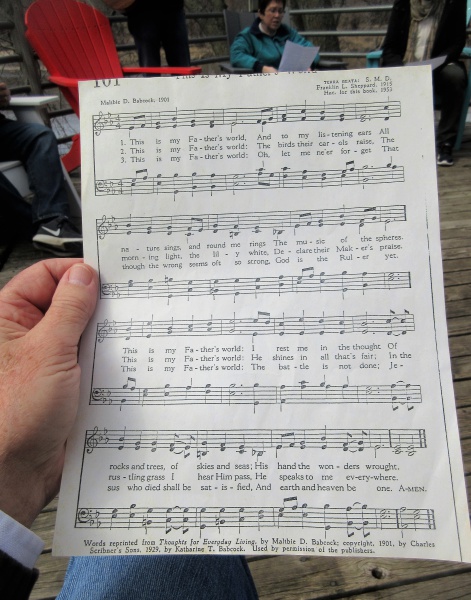 Our song on the sheets that Ellen Corwin handed out. 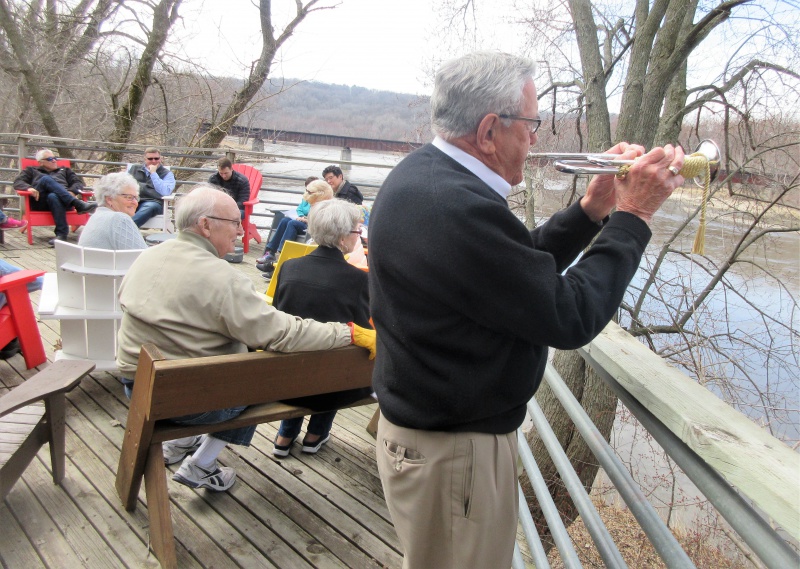 Our Babcock Society is a classy group.  In fact, we have our own bugler, Stan Moffitt, who bought this genuine Boy Scouts of America bugle on eBay a few years ago. It’s part of our tradition now that Stan plays “Taps” after we’ve remembered our deceased members, Y-Campers of the past, and other departed supporters of the Des Moines YMCA, which owns and operates the camp. 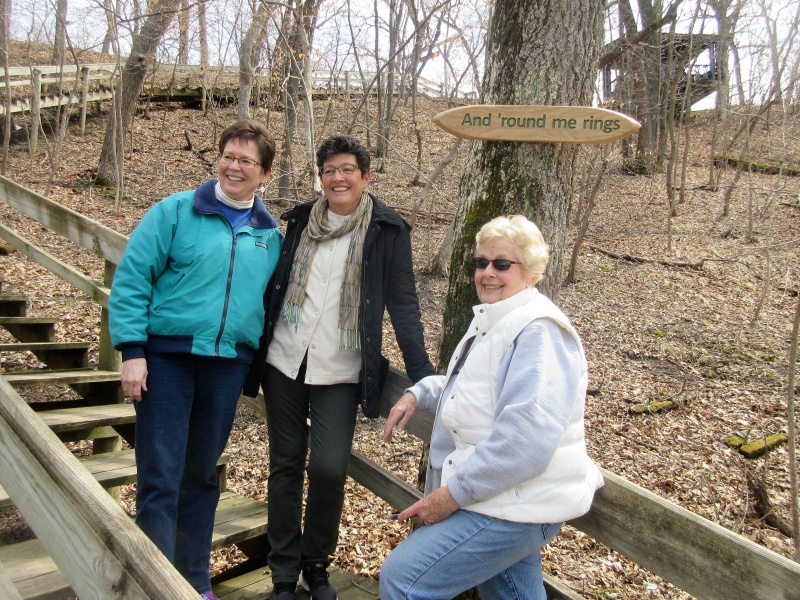 Taking a break while climbing the 135 steps up Chapel Point, Martha Gelhaus of Des Moines, Carla Offenburger and Ellen Corwin. 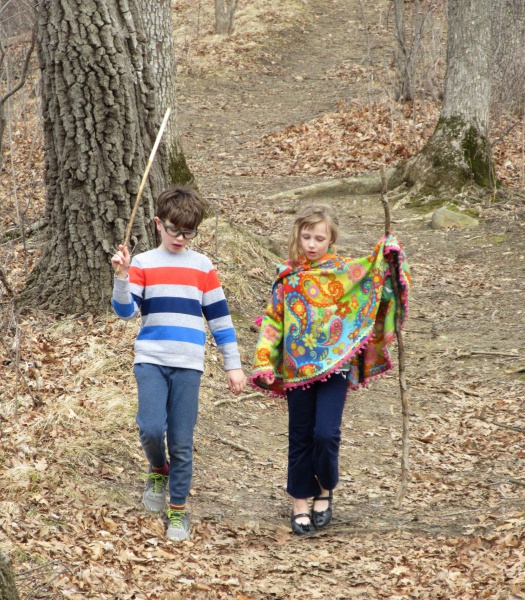 The Corwin grandkids Nathan and Charlotte ran up the Chapel Point stairs, then were walking the trail along the blufftop. That bluff, by the way, soars up to 300 feet above the Des Moines River on the west and a deep ravine on the east. 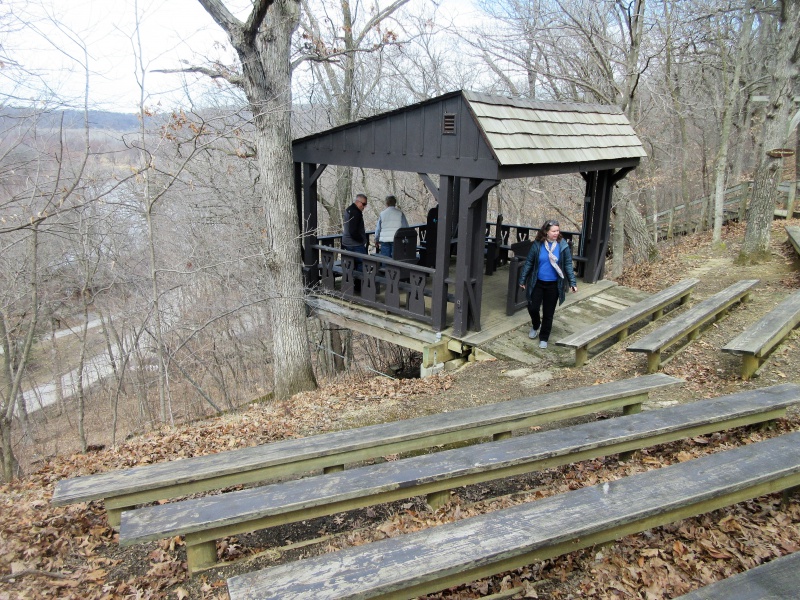 A very special place to the half-million or more Y-Campers who’ve been here over the past 98 summers — Chapel Point. 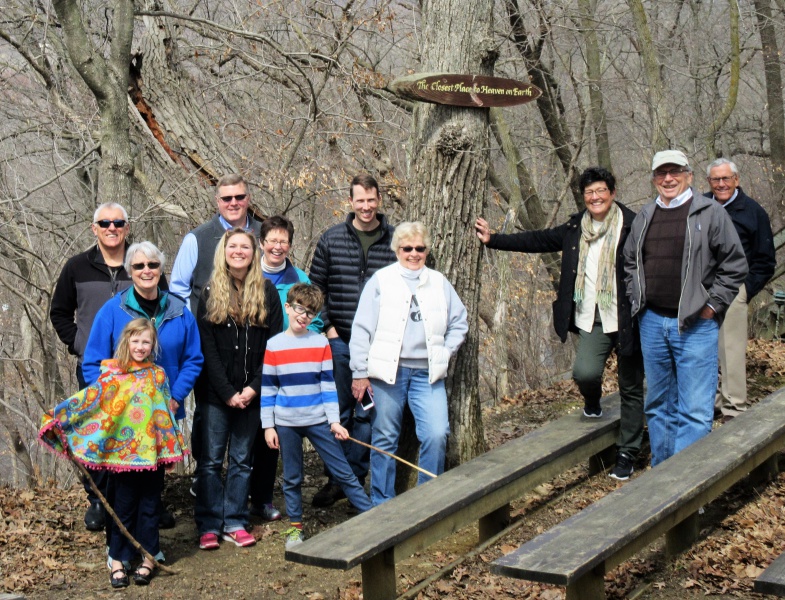 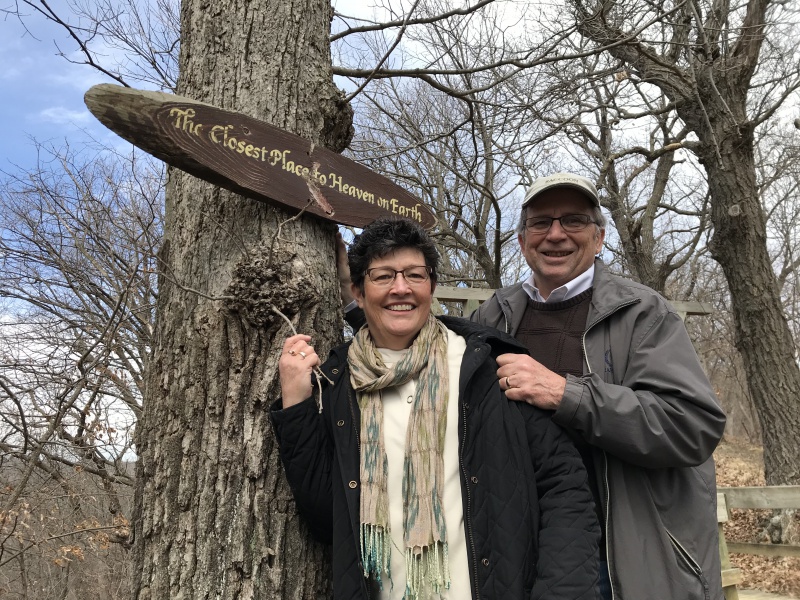 We Offenburgers have always especially loved this old sign up on Chapel Point that invokes the Y-Camp’s motto, “The Closest Place to Heaven on Earth!” 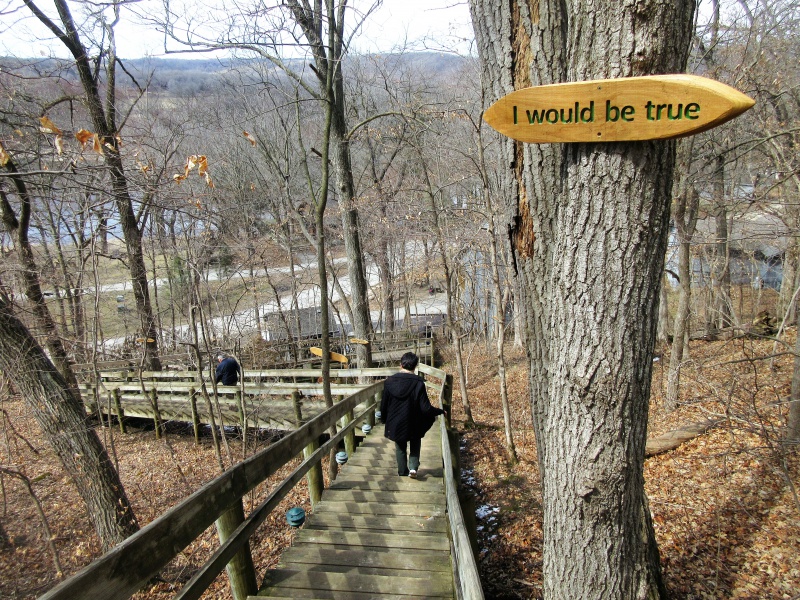 The lyrics on the plaques on the way down from Chapel Point are from the hymn “I Would Be True.” 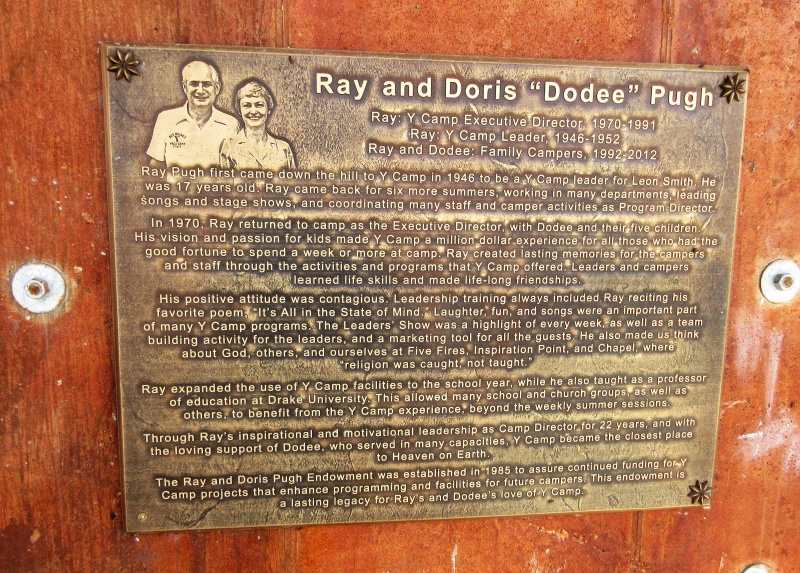 This wonderful plaque at the Y-Camp tells the story of Ray and “Dodee” Pugh, the couple from the Des Moines suburb of Johnston who ran the camp for years, and many from their family worked there, too.  Ray died in 2012.  Dodee was with us at the camp on our visit this week.

2 thoughts on “Our Holy Week tradition has its 25th anniversary, but without our leader”