COOPER, Iowa, Aug. 19, 2018 – I’ve long said that one of the things I like most about being a Catholic is that the church is slow to bend to the social whims of the moment, including my own. That has probably helped Catholicism survive for centuries in the many very different cultures it serves around the world.

But after last week’s grand jury report in Pennsylvania exposed the continuing horrors of sexual abuse by priests, along with continuing cover-ups by bishops and other superiors, I can’t help feel that there better be dramatic change in the church – and it better happen fast.

I was traveling in northwest Iowa on Friday as awful new developments in the story were breaking in the news. We stopped in Remsen so that my wife Carla Offenburger and I could show our friends Karen and Doug Lawton the huge, beautiful and inspiring St. Mary’s Catholic Church, and you can see its towering altar here. 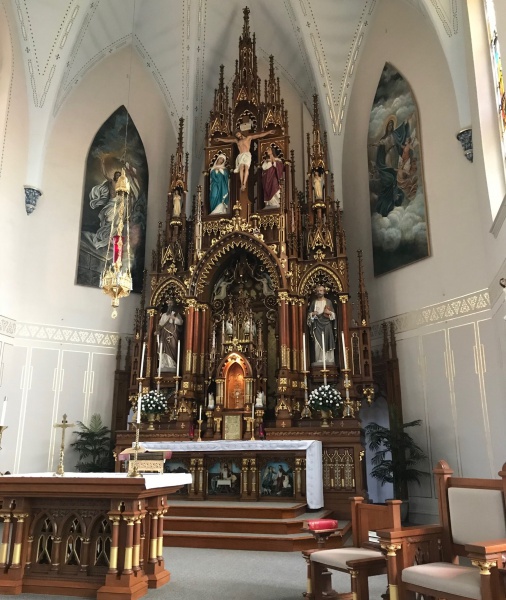 Being in that sanctuary, I couldn’t help but say a brief prayer: “Holy Mother, guide us through this awful failing we Catholics have allowed to happen. Show us the way.”

Sunday morning at my own parish, St. Patrick in Perry, I thought attendance was a little light. Maybe that’s because it was a Sunday in August. But my fear is that it might have been because of the past week’s grim news about the church.

Our pastor Father Chris Reising did address the scandal, not in his homily but rather in remarks after communion when he normally makes a few announcements. He spoke candidly and honestly, saying there “is no excuse” for the sexual abuse by clergy in Pennsylvania or anywhere else, that it was indeed “shocking” and “disgusting.”

He went on to say that he hopes that people will keep the grand jury’s allegations in perspective. He pointed out that many of the cases cited in Pennsylvania are decades old. He said that reforms the church has made since a similar scandal broke in the Boston Archdiocese in 2002 are in fact working, and the number of new sexual abuse cases is way down. Still, he said, every single case should be reported and investigated.

“God forbid that anything like that would happen here,” he said to us. “But if it did, don’t call the bishop, call the police. Or call the police, and then call the bishop.” The bishop and his staff don’t have the training to do the kind of investigations that are needed, Father Reising explained, and the police know how to investigate and prosecute if laws have been broken.

It was jarring to hear your parish priest saying something like that from the altar, but it absolutely needed to be said in this current climate.

We people – Catholics and everybody else — need some reassurance and confidence that the Catholic church will change.

What will that require? A Vatican III? Diocesan- or even parish-level discussions?

Whatever is going to happen, as I said earlier, it must happen soon.

I pray that Pope Francis – in whom I have much faith – will take immediate action and order an end to the current requirement that priests almost always must be unmarried, celibate men. Too many of them, it seems, wind up sex-starved — which is hardly unnatural or abnormal.

That seems to be a church leadership model that has worn out, if it ever actually worked. We know from history that the church’s rules about celibacy and married clergy have changed over the centuries. In fact, there have been apostles, priests, bishops and even early popes that were married.

My own belief is that the priesthood should also be open to women as well as men, single or married.

And actually, I wouldn’t be concerned if our priests are gay or straight as long as they are spiritual, faithful and law-abiding.

Leadership positions on up the church’s hierarchy should be open to women, too.

If none of that happens, I really fear the Catholic Church might collapse, even with its global membership of more than a billion.

It’s not just pedophilia and other sexual abuse by priests that’s a problem.

We simply can’t find enough young men to go into the priesthood.

The Catholic Diocese of Sioux City in northwest Iowa once had more than 100 parishes, and about that many priests, too. The diocese is now undergoing a complicated reorganization to get down to about 60 parishes, and they’ll be arranged in “clusters” – usually two or three parishes that are served by one priest.

Yes, some of that consolidation is driven by declining population, especially in rural parishes. But the biggest factor is that the diocese expects its number of priests to drop to about 31 – serving all of northwest Iowa! My goodness, I can remember when the Sioux City Diocese had 38 Catholic high schools.

The other three Catholic dioceses in Iowa – with headquarters in Dubuque, Davenport and Des Moines – don’t seem to be quite as stressed as Sioux City’s, but the numbers of priests are declining across the U.S. and beyond.

It’s sad to see parishes where you might have 75 to 100 or more members wanting to go to mass regularly and participate in parish life, but they are being closed because of the priest shortage. In many cases, those parishes have substantial financial resources that could sustain them, but no priests!

My observation is that if the global church discontinued the requirement that priests be unmarried, celibate and male, it would have no priest shortage.

I have known many good, devout Catholic men and women who would have loved to be priests – and would probably have been great ones – if they were allowed to be married and have families.

Meantime, please pray for us.