JEFFERSON, Iowa, Aug. 21, 2018 — In late summer about five years ago, Scott Shriver and his crew from Shriver Farms had most of us in Greene County stumped about what the “new” crop  was that they had coming up in a very visible field along Iowa Highway 4.  First there were distinctive green shoots, then poofy heads that became white blossoms, then the plants turned golden and finally darker brown.

Only the oldest farmers around us could guess what it was — buckwheat!  Nobody had planted any of it in our neighborhood south of Jefferson for decades.

And everybody is just as curious, most springs, when the corn is about a foot tall and the Shriver crew gets out their “flamers,” which are ground-hugging units with propane burners, extending out from their tracked Caterpillar tractors.  They use them to scorch young weeds in the cornfields. Neighbors not only want to watch but listen, too. “These things sound like freight trains when you’re flaming,” Scott Shriver told a crowd of visiting farmers the other day, when they were examining the flamers and his other equipment.

That’s how it is when you live near one of the state’s best-established and largest organic farms  Shriver Farms, on its 2,000 acres, produces not only chemical-free crops that command higher prices than conventionally-raised crops, they also produce some darned good spectating. 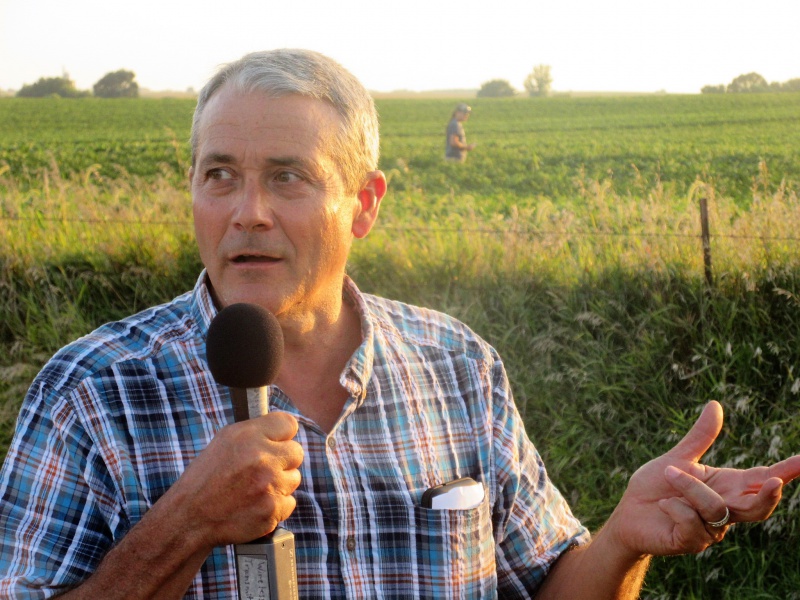 Scott Shriver, of Shriver Farms in Greene County, is one of Iowa’s leading organic farmers.

“We’re all here today to see how Scott is still alive after pulling weeds out here for 20 years,” joked Steve Carlson, a staffer with Practical Farmers of Iowa, as he welcomed more than 150 people attending a PFI “Field Day” on Aug. 9, specifically demonstrating how Shriver Farms handles weed control. “That’s how long he’s been organic — for 20 years!”

Of course, 58-year-old Scott Shriver isn’t personally pulling many weeds at all.  Rather, he and his crew try to control them with agronomy, crop rotation, ecology, fascinating equipment, careful record keeping and a whole lot of planning. “Even after 20 years, there’s still a big learning curve,” he said. “The longer I do this, the more I know what I don’t know. You know what I mean?”

It really is quite a story, and that’s why I joined the crowd for the field day.

Shriver Farms of today is headquartered on the same farm southwest of Jefferson that Michael Shriver, Scott’s great-grandfather, homesteaded in 1876. Then came Amos Shriver, Meredith Shriver and now Scott, who never expected to become a farmer when he was growing up in town. 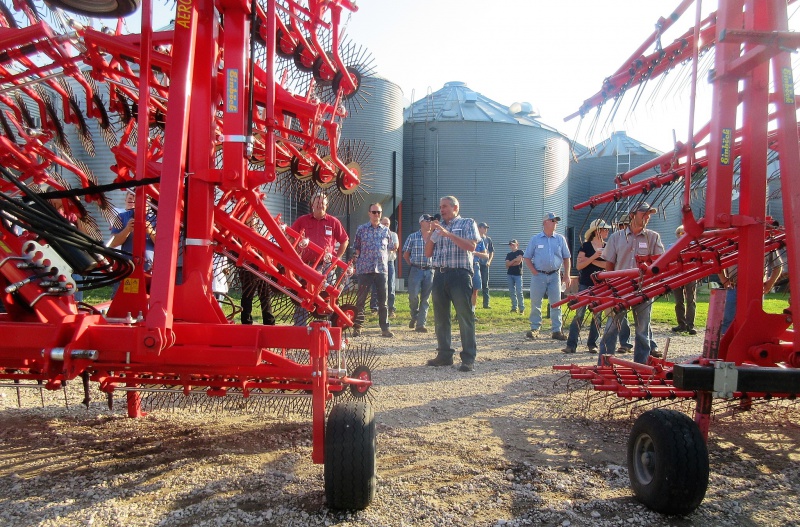 His late father Meredith and mother Kathryn, who still lives in Jefferson, were real entrepreneurs — not only farming but operating Shriver Construction, which until closing in 2010 was known for its pre-engineered steel buildings.  They also invested in other local companies and owned apartments in Marshalltown and Ames.  And they raised Scott and his three sisters, one of whom, Rhonda Harding, still lives in Jefferson with her husband Sam Harding.

“Growing up, I’d help out a little at the farm,” said Scott, who graduated from Jefferson High School in 1978, “but I never thought it was my thing. I had a lot of friends who were growing up on farms that knew a heck of a lot more about it than I did.”

At that age, he was more interested in construction, went to Iowa State University in construction engineering, graduated in 1982, and spent the next 12 years in Texas working for a couple different contractors in that state.  He was superintendent or manager on several projects such as an Embassy Suites Hotel, three post offices and some community college buildings.

“In 1993, Dad had a stroke,” Scott said. “In one day, he went from being totally involved in all parts of the farm operation, to not being able to do any of it.”

Scott Shriver moved back to Iowa in 1994, settled in Ames to be near the apartments.  There were already project managers running the family construction company, one of them Scott’s brother-in-law Sam Harding. Scott also began filling in as needed at Shriver Farms, quickly becoming more interested in it.  They were farming about 800 acres then, all conventionally. 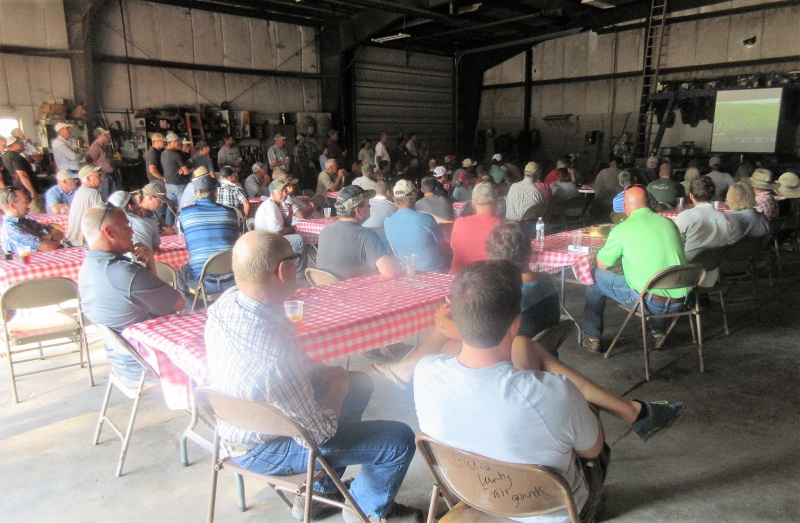 Shriver telling the story of going organic, to a full house in the Shriver Farms shop building.

“At first, I hired a guy who was capable of running the farm operations, and I took over the business side of it,” he said.  “I started learning more about farming from the people working for me, and I liked it.”

In 1998, they bought the Marion & Shirley Hostetler farm, a few miles east of the Shriver home farm.

“About that same time, I read an article in a farm magazine about how an organic farmer was getting $16 a bushel for his soybeans, and that got my attention,” Scott said. “So I started taking a lot of time talking to people who were in organics.  The Hostetler farm had 40 acres on it that had always been a pasture, and had never had any fertilizer on it, so it could go right into organic status.  I thought, ‘Why not?’ And we took another 50 acres that we started transitioning to organic.”

In coming years, they bought more farms, began converting them and by 2008 were totally organic.  Today, Shriver Farms includes 2,000 acres, as I said earlier, spread across 19 farms.  Scott, still living in Ames, commutes to the farms and is part of the operational team that includes Kevin Fall and Ben Barron, who are like farm managers, and Austin Reding, who is newer and working like a hired hand. 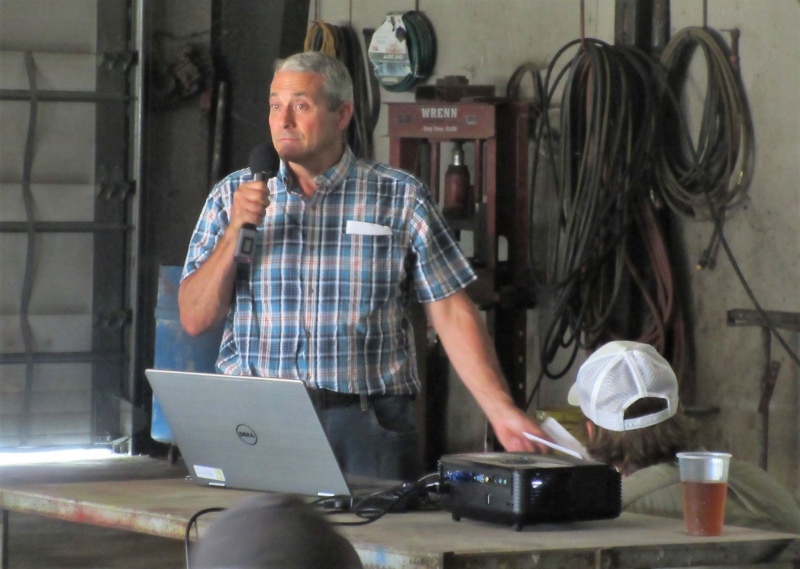 Shriver is comfortable  weaving photos, statistics and charts into his presentations.

Their principal crops are organic corn and soybeans, “almost all of that used as feed for organic livestock.” The corn is all contracted to an Oregon feed mill, which supplies large dairy cattle  farms in northern California. A lot of their soybean production goes to feed chickens used in the egg industry.

They rotate planting corn and soybeans with “smaller grain crops” like spring & winter wheat, oats, barley, triticale and, yes, buckwheat in some years.

They raise no cattle, but have a four-barn hog confinement that they are not operating organically. “We custom feed the hogs for Seaboard Foods,” Scott said,.  That Kansas-based company is among the three largest pork producers nationally.  Shriver Farms gets the manure to use as a natural nutrient for its crops.

One other part of Shriver Farms business is a 6-year-old “dehydration plant” across the road from the headquarters farm.

“We’re in a partnership on that with a company Pines International, from Lawrence, Kansas,” Scott said. “We’re a supplier to them. We cut wheat, barley and oats when they’re small, before the plants joint. We have choppers that cut it, chop it, and then we dry it.  Finally, it’s pelletized, and then Pines International makes human health food out of it.”

The dehydration plant “hasn’t been nearly as good a business as we thought it would be,” Scott said, “but we’re working hard to pay off the plant,” the ownership of which is equally split by Shriver Farms and Pines International. 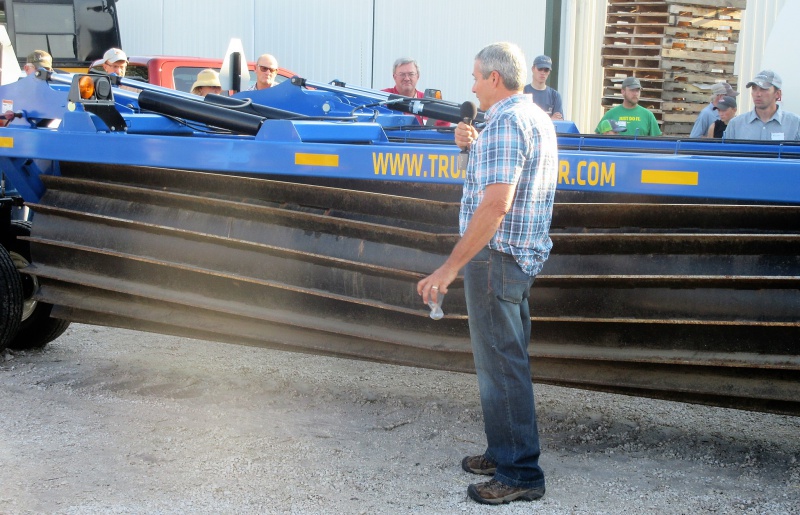 Showing a $40,000 roller, or “crimper,” that folds out 40-feet wide and works fields with herringboned steel blades. It will make a mulch cover between crop rows, to hold down weeds.

And how’s the rest of Shriver Farms’ business doing?  Two decades later, has the conversion to total organic crop production been a good move?

“It’s been a good decision financially,” Scott said. “Organics leave room for you to make some mistakes, and we’ve made a lot of them over the years.  And we had a lot of missed opportunities to do better than we have.  But overall, I think it’s a better way to farm — better for the land, and better for those of us working on it.”

He said that “10 years ago, everybody said organic farming was a fad, one that would go away.  Actually, the whole organic industry has had a lot of growth since then.  Now if it ever does seem to go away, I think it’ll be because conventional agriculture could move more toward what we do.”

Two things might drive that.  First, there is increasing demand from consumers for organic food products, and second, the finances of it all.  Organic farmers generally receive higher prices for their crops and animals.  Their labor costs for farming organically tend to be higher than those of conventional farmers, but the organic farmers realize huge savings in not having to pay for chemical fertilizers and pesticides. 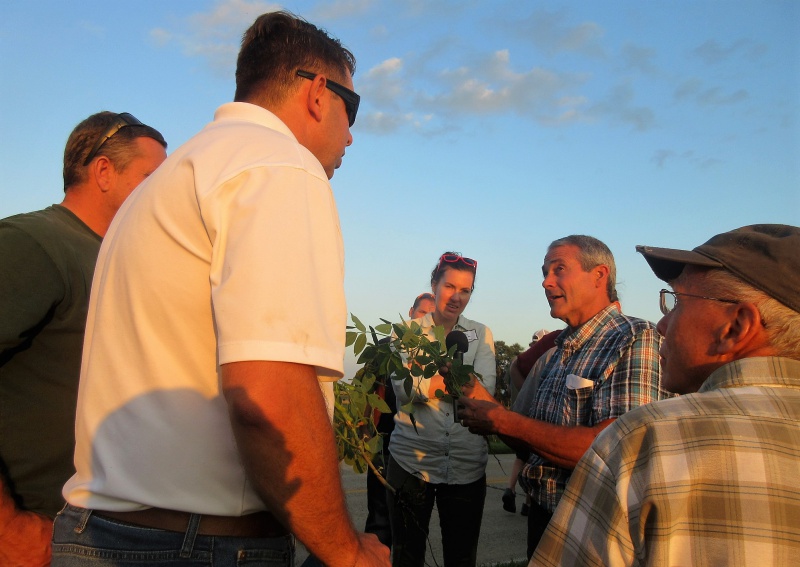 Checking out a soybean plant’s development.

Shriver said he notices a couple things most organic farmers have in common.

“I think many of us have had some other career experience before we’ve started into organic farming,” he said. “We haven’t been ingrained in conventional farming as a lot of our neighbors have been, so maybe it’s a little easier for us to think outside the box.  The other thing, we seem to open up and talk to each other a whole lot more than a lot of conventional farmers do.  When you go to our field days, or other meetings, everybody’s asking questions and sharing experiences.  We have a good time and learn a lot from each other.”

In recent years, one of the most sought-out organic farmers in Iowa is our own Scott Shriver.

“Scott’s operation is definitely one of the largest organic farms in the state, with only a couple that are bigger,” said Aaron Lehman, of rural Polk City, president of the Iowa Farmers Union. “He’s very well-known and respected by organic farmers from all over, and a whole lot of them call him for advice.”

Mark Peterson, who farms near Stanton in southwest Iowa and is the president of Practical Farmers of Iowa, said “if I ever get serious about going organic myself — I doubt I will at my age but if I did — I’d be going to Scott Shriver to talk to him.” 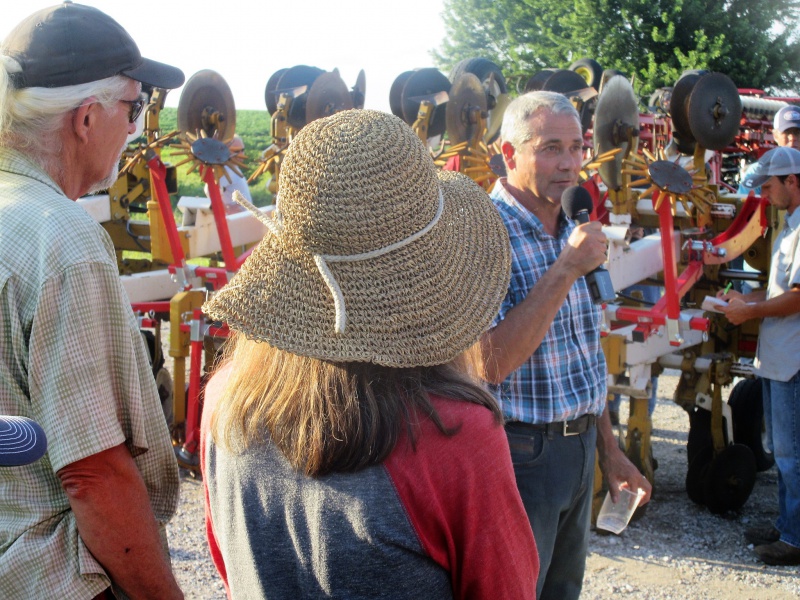 Shriver hopes he has good years ahead of him and hasn’t started serous succession planning. “To be honest, I have thought about it, but probably not as much as I should,” he said.

He and his wife Paula (Roepke) Shriver, who is also a Jefferson native, have three grown children — sons Colin, a construction engineer; Michael, an ag major now working in landscaping, and daughter Rachel, a school teacher.  All three have expressed varying levels of interest in becoming part of Shriver Farms in the future.

Meanwhile, Scott himself says he hardly feels like the seasoned veteran in organic farming that many consider him to be. He knows there is still much to learn.

“Twenty years went by pretty quick,” he said. “But often, I still feel like a novice.” 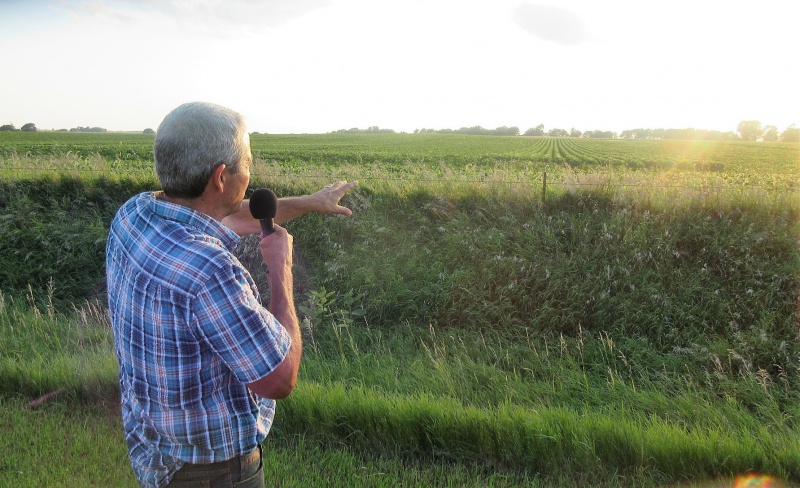 When Shriver looks over one of his soybean fields, he sees a whole lot more than most people do. 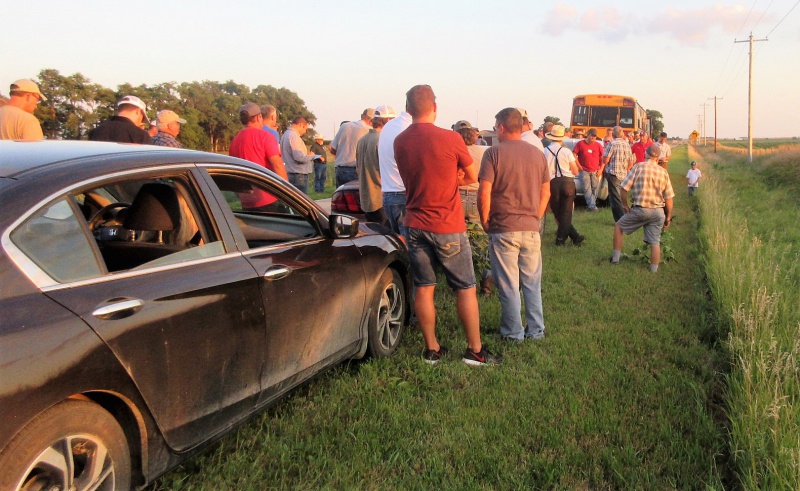 Roadside report from Shriver on a soybean field for his Practical Farmers of Iowa field day visitors.