COOPER, Iowa, July 4, 2016 — It’s been nearly 90 years since “knee-high by the 4th of July” was a legitimate measure of a good corn crop, going waaay back before Iowa farmers had the fantastic hybrid seed varieties that they use today. But our neighbor and pal Doug Lawton still good-naturedly puts up with our insistence for an Independence Day check in one of his fields. The shortest we’ve ever seen it is chest-high.  In good years, we see it about like it is right now — head-high and then some.

“I’d say we’re ahead of schedule,” the 61-year-old Lawton said Monday morning, after we had gathered his wife Karen and all five of their grandchildren for our traditional photos in a cornfield. 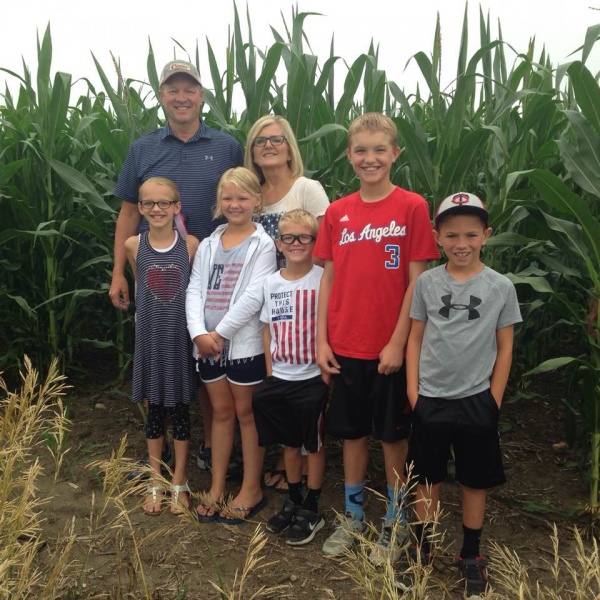 Checking how the corn crop is measuring up are Doug and Karen Lawton, with all their grandkids (left to right) Maggie Nailor, Natalie Towers, Wesley Nailor, Cooper Nailor and Nathan Towers. The Nailors live in Indianola and the Towers kids live in Jefferson.

The 80-acre field we visited was planted April 13 with Curry 824-04 seed.  There was good moisture — almost too much — right after that.  “We had some ponds in the fields, but luckily, the corn hadn’t started to come up yet,” Lawton said. Then came the unusually big heat in June, and right when we needed it, an inch of rain fell last week, even more in neighboring areas.  After that good fortune, the corn around here in west central Iowa started tasseling late last week and is now showing silk on the developing ears.

They call the field we saw “the McNabb farm,” even though the Lawtons have owned it about 12 years.  The name comes from Emmett and Irene McNabb, who once lived adjacent to the field and farmed it.  Doug Lawton guesses it “was in the mid ’60s when they moved to town,” but it’ll probably forever carry their name.

The Lawton farming operation now includes about 1,600 acres.  Doug, who taught a year after graduating from Westmar College, started farming full-time in 1979, so this is the 37th crop for which he’s been mostly in charge on the family’s operation. They were once known nationally for cattle production — having as many as 10,000 head on their farms — but left that when the farm economy began to sour in the 1970s and have been primarily corn and soybean farmers since then.  Doug also sells insurance and real estate and Karen works at both the farm and Krieger’s Flower Shop in Jefferson. 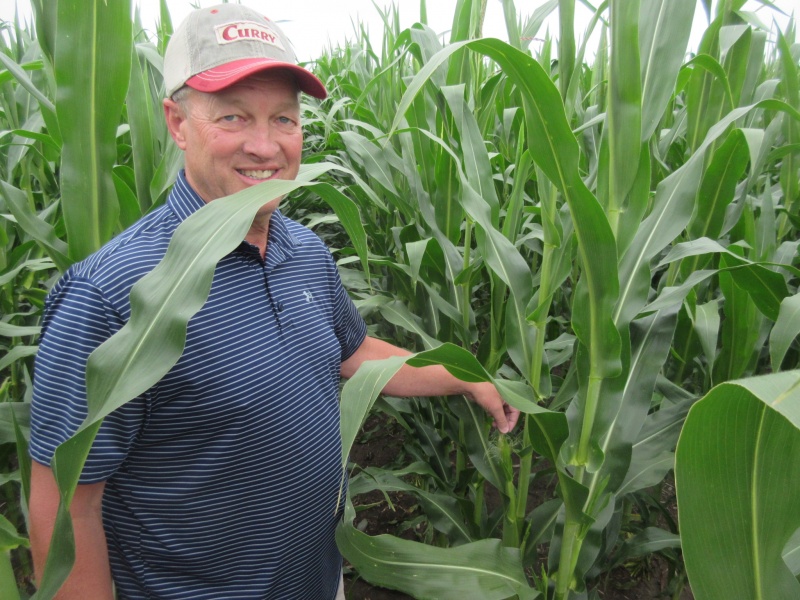 Doug Lawton shows a developing ear that is showing its cornsilk. 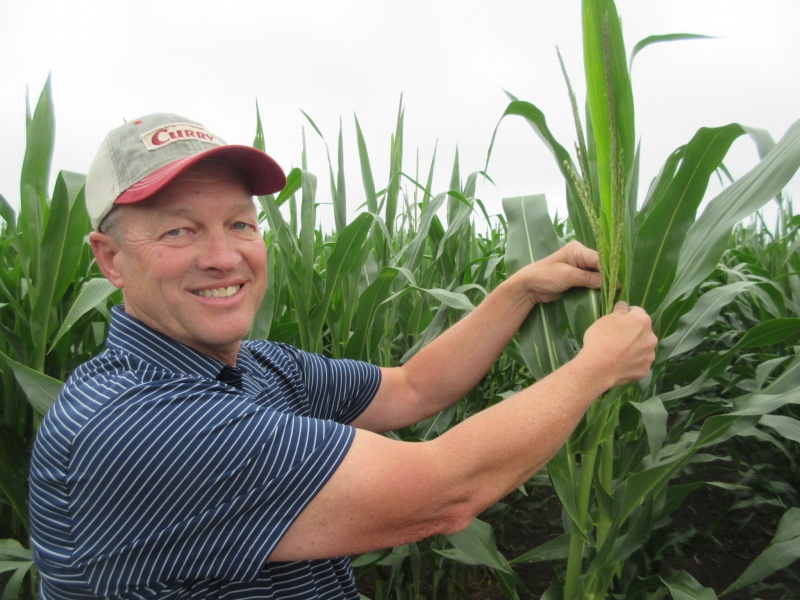 The corn in our area of west central Iowa also started tasseling. We first noticed it Thursday, June 30.

Doug Lawton told me recently that, if his health stays good, he hopes to farm “maybe until I’m 70.”  Succession is not yet determined.  There are two Lawton daughters who are school teachers and a son who is in business in Des Moines. Doug has two brothers and two sisters in the extended family, too.  They lost their matriarch, Doug’s mother Dot Lawton, who died unexpectedly at 80 years old in early May — and the whole community is still adjusting to her loss.  Doug’s father Gerald Lawton died in 2006.

There have been at least three, maybe four generations, that have preceded Doug Lawton in a family farming operation that goes back at least 100 years.