BALLTOWN, Iowa, March 7, 2016 — Mike Breitbach pointed at me from another customer’s table the other day and told him, “That guy over there and I have been friends for 40 years.”  No way, I first thought. But I quickly did the math, and, yep.

The first time I came to Breitbach’s Country Dining, the oldest restaurant and bar in Iowa, was in about 1975, and I’ve probably been back 80 or 90 times.  I’ve arrived in Balltown, a town of 68 northwest of Dubuque, by bicycle, by car, by college van and by tour bus.

Two things you always know you’re going to get at Breitbach’s — great food and great stories.

“Let me guess,” I said, “you two were talking to each other on those cell phones?” 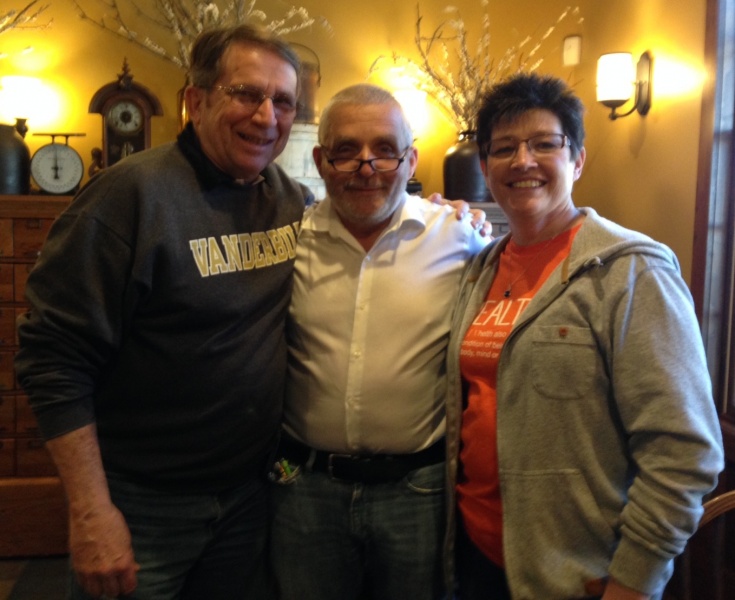 We Offenburgers with Mike Breitbach (center), 65-year-old co-owner of the legendary Breitbach’s Country Dining, founded in 1852 in Balltown. The family is in its sixth generation in the business.

So on Saturday afternoon, Feb. 27, Carla and I drove into Balltown again.  There was a pick-up truck stopped in the wrong lane of the county road, with the driver leaning out the window having an animated conversation with Skip Breitbach, who was standing there in the street.  The driver?  Mike Breitbach, of course.

We got together in the restaurant’s dining room, where at 3 o’clock in the afternoon, there must’ve been 20 people who’d gone through the buffet line and were eating.  That tells you how good and busy Breitbach’s is. In fact, it’s got the best and most consistently fresh buffet that I know of anywhere in Iowa.  Truth is, I’m not sure I’ve ever ordered off the menu at Breitbach’s because of the quality of the fried chicken, beef, pork, ham and fish I’ve had there from the buffet.  The salads and side dishes are just as good.

“The other day, Cindy got a call from somebody in South Carolina who’d been here, and they were asking her how she does the carrots we have with the relish,” Mike said of his wife and partner. “She ordinarily won’t tell anybody her recipes, but she said, ‘Oh, you’re far enough away, I can tell you.’  So she was saying how they cut them just right, let them marinate for like two days, and I could hardly believe it myself.  Nobody takes the time to do this stuff the way Cindy and her kitchen help do. That’s why it’s so good.”

Cindy Breitbach has had a rule for at least the last 30 years that “there are only two customers who get to come back to my kitchen — Terry Branstad and Chuck Offenburger.”  I don’t know how the Governor first started sneaking back there, but I made it by throwing a fit about wanting to see the pies they always have baked fresh.  They generally feature several varieties of fruit pies, a couple of cream pies, a distinctive walnut pie, often a “snicker doodle” pie.  The raspberry pie has always been my own fave.

Breitbach’s Country Dining won a prestigious “American Classics” award in 2009 from the James Beard Foundation, the culinary arts resource organization named for the chef called the “Dean of American Cookery.”  And Breitbach’s pork dishes, including their breaded tenderloin, have been judged “Best of Iowa” several times.

All of the above has attracted diners from around the world, including some famous ones.  One of their boasts has been “The only restaurant in the world that has served both Jesse James and Brooke Shields.”  Yes, the notorious James Gang once holed up at Breitbach’s for a few days in 1876.  It was in the 1980s that actress Shields came in with her mother, taking a break from a movie she was making in the region.  The Breitbach’s waitresses and waiters were super excited after they’d confirmed her identity, and they rushed back to the kitchen to tell Mike Breitbach.  His answer: “Who the hell is Brooke Shields?” 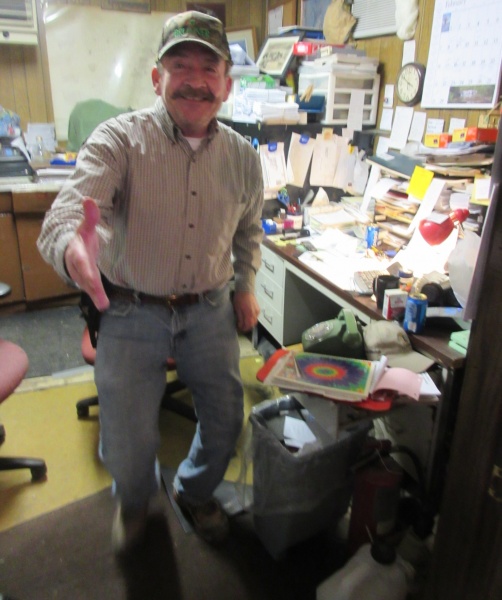 Skip Breitbach, 60, Mike’s brother, always has a welcome ready across the street from the restaurant at Skip Breitbach Feeds, where you can get any kind of feed and seed you need, pet snacks (we once purchased dried pig ears for our dogs), bulk salted peanuts in the shell and more.  In the fall, we’ve bought beautiful clumps of dried flowers there.

The Breitbachs have survived many challenges, not the least of which is that Mike and Cindy are the parents of seven children, the oldest of them now 30-somethings, all of whom have been or continue to be employees at the restaurant.  They also have seven grandchildren.

Their most well-known challenges were the fires that twice destroyed their building.  The first, which took the original 155-year-old building, happened in December, 2007.  They rebuilt, and then six months later, in October, 2008, the second fire destroyed the new building.  Mike and Cindy gave serious consideration to clearing the rubble and calling it quits.  But ultimately they acquiesced to the appeals of customers to give it another try.  Mike added that he didn’t want to be the generation in his family that gave up the historic business.

The newest building is a tremendous facility, with ample sophisticated fire-prevention equipment.  They can accommodate a few hundred people at a time when they are busiest. But the emphasis remains on quality, and they’re still achieving it.

Besides hearing great stories, you also just never know what you’re going to see at Breitbach’s.

Which reminds me of the fall of 1998, when I was spending three or four days per week in Dubuque, teaching journalism at Loras College.  I had a bicycle there, and a couple mornings a week, I’d drive out to Balltown early, meet Mike Breitbach at the restaurant at 7 a.m., and we’d pedal the scenic Ridge Road over to the neighboring town of Holy Cross and back.

So one morning I got there, noticed a pick-up truck parked behind the restaurant and thought Mike was already there waiting for me.  So I went over, opened the door of the restaurant and looked into total darkness.  I yelled for Mike but got no answer.  So I returned to my car, unloaded my bicycle and started getting ready for a ride.  While I was doing that and waiting for Mike, the restaurant door opened, out walked a big groggy man, who stood there stretching, scratching and yawning.  He glanced at me, didn’t say a word, walked back to the pick-up, started it up and drove away.  And a minute or so later, here came Mike Breitbach pedaling up to the restaurant from his nearby home, ready for our ride.  I told him what I’d just seen and suggested he might want to check the business.

“Oh, everything’s all right,” he said. “That poor SOB lives in North Buenie, the town just down the hill and over at the river. He was hanging out here last night, had too much to drink, got down on the floor and went to sleep. They called me at home when they were ready to close and asked me what to do about him, and I said just let him sleep it off.”

Mike Breitbach gave everybody a scare the second half of 2014.  He had two strokes, and his doctors traced the problem to his heart.  He underwent heart surgery and then extensive physical therapy for cardiac rehabilitation.  He said he has almost fully recovered his strength and energy, is working full throttle at the restaurant and expects to start bicycling again soon.

“That was really something,” he said of the surgery. “Let me show you.”

And before we could say that he didn’t really need to do this, he got up from our table in the dining room, unbuttoned his shirt and showed his scarred chest to us mid-afternoon diners.

The guy’s got his heart in it, you know?  I don’t mean just in the restaurant.  I’m talking about life in general. He’s not near ready to give it up yet. 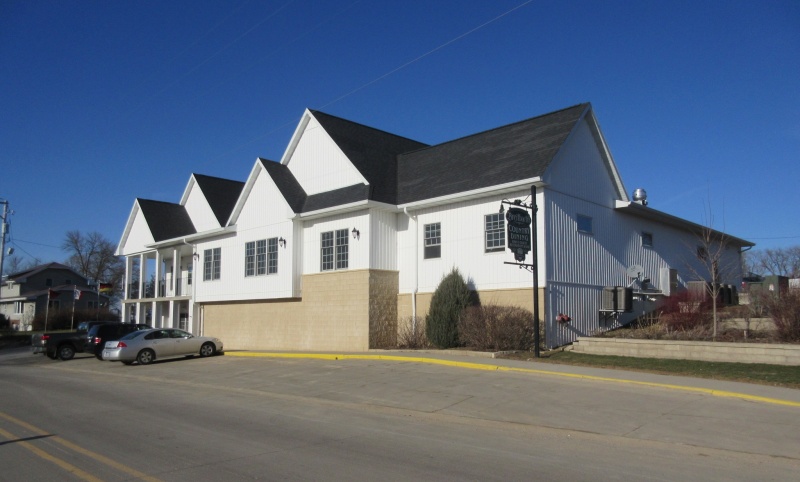 The striking Breitbach’s Country Dining Restaurant in Balltown.  If you go a half-block north of the restaurant, there’s a dramatic overlook of a deep valley and the Mississippi River.

You can read more about Breitbach’s Country Dining, check their hours and menu, and get other details by clicking here.

One thought on “Back to Breitbach’s, where the food’s great and so are the stories!”