COOPER, Iowa, July 4, 2020 — As we were taking our traditional measure of the corn crop and the general health of agriculture on the eve of this Independence Day, our friend and neighbor Karen Lawton hit upon what may be the happiest thing you can say about it right now: “The farm seems like a pretty good place to be in a pandemic.”

Most importantly, said her husband Doug Lawton, who is tending his 43rd crop, “We’re healthy.”

He was careful this spring as he planted his 1,600 acres not to let anybody but close family ride along with him in the tractor.  When seed dealers and delivery crews showed up at the Lawton headquarters farm, just northeast of Cooper in west central Iowa, Doug said they did a good job of business distancing. And the Lawtons are vigilant to put on masks and keep a social distance when they’re around others beyond family. 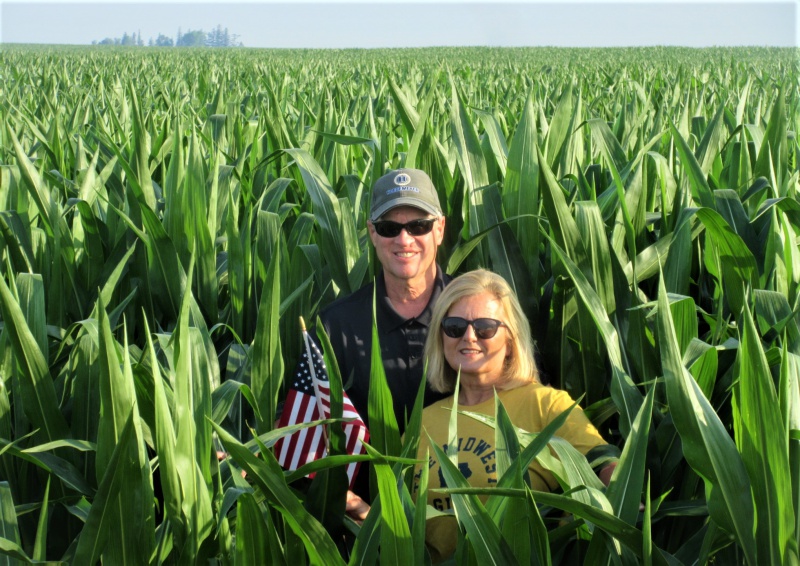 Doug and Karen Lawton, on July 3, in one of their cornfields they say is representative of this year’s crop right now.

The planting season “was easy, one of our best ever,” Doug said. “We started planting corn on April 19, and we finished planting our soybeans on the 2nd of May.  The weather was about perfect. I think we may have lost one partial day as we planted, but that was all.”

But then, with all the seeds nicely in the ground, it quit raining.  Of course, many areas of Iowa have been sopping wet.  But so far this spring and early summer, the decent rains have kept dividing to the west of us, then going around Cooper to the north or south.  “Since the middle of May, we’ve had just a few teasers,” Doug said. “I’m not sure we’ve had a rain of an inch or more in that whole time.”

But through the science and miracle of plant genetics that Hoegemeyer Hybrids, of Hooper, Neb., puts in its seeds, “the crops have enough drought resistance to withstand some dry weather like this,” Doug said.  And he believes it also helps that the Hoegemeyer division of Corteva Agriscience is now being directed by general manager Jeremy Thompson, who is a native of our Greene County. 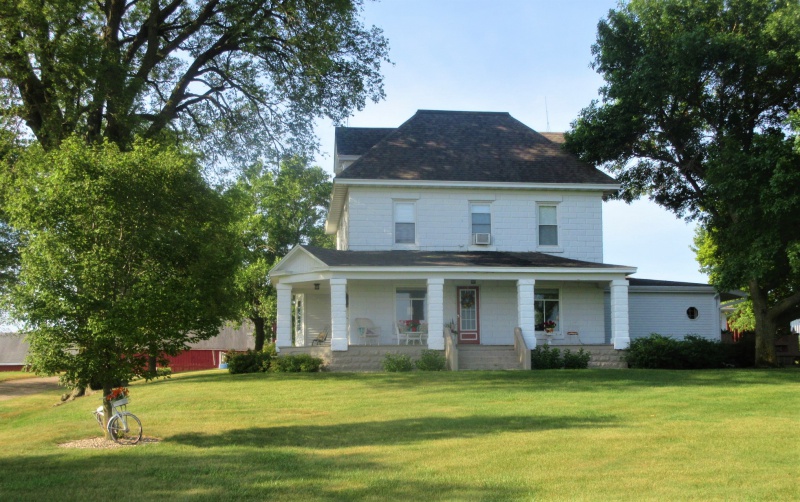 The beautiful headquarters of Lawton farms.  This is the site of the annual Lawton Reunion, which has happened the first Sunday of August for over 100 years. It’s been canceled this year because of the threat of the corona virus. Ditto for this year’s Wilcox Reunion, always held elsewhere by Karen Wilcox Lawton’s family. Nevertheless, the Lawtons say, the farm remains a good place to be during the pandemic.

So the farmers Lawton have done their job.  The Hoegemeyer seeds have done their job.  Despite the lack of rain right around here, the corn looks great. It’s way over head-high, and waaaaaay beyond the old measure of “knee-high by the 4th of July” that people talked about 90 years ago before the wizards gave us hybrid corn.  Doug Lawton notes that the soybeans “don’t look quite as good right now. They really need more rain.”

Will this be a profitable year?

Uh, wouldn’t that make it about the fifth or sixth consecutive year of low, or no, profits?

Oh, we all hear about farm subsidy payments and the two “Trump bump” checks many farmers have received the past year to try to help them. “Every dollar that comes in does help,” said Karen Lawton.  Those have not balanced the financial carnage that farmers have suffered in the grain and livestock markets, both internationally and domestically.  Doug Lawton says most farmers would prefer having good healthy international and domestic grain and livestock markets; a good, steady U.S. agriculture policy, and never receiving government support.

But what we’ve seen instead is a failure in U.S. diplomacy that has blown-up farmers’ decades of relationship building with customers in China; other nations, notably Brazil, have stepped up their competition with our ag producers; we’ve seen unimpressive domestic grain markets; the livestock markets are staggering, and the bio-fuels have been clobbered to the point that several ethanol plants have closed.

If it wasn’t so pretty in Greene County in early July — with a dozen different shades of green now covering some of the best soil in the world — you’d say it’s getting ugly around here.

Are farmers likely to turn against President Donald Trump, the Republican whom they had a big role in electing four years ago? The Lawtons, both of them Democrats, didn’t vote for him, and they say they are still mystified why so many farmers did.  Do they see a shift now in most farmers’ support away from Trump? “Maybe only slightly,” said Karen. “I don’t see it shifting dramatically away from him.”

But undeniably on this Independence Day, farmers are less independent than they like to be.

Corn this week was selling at $3.15 per bushel.  Soybeans this week were $8.25.  A week ago, corn was below $3 and soybeans were under $8.  Both Lawtons winced at those figures. 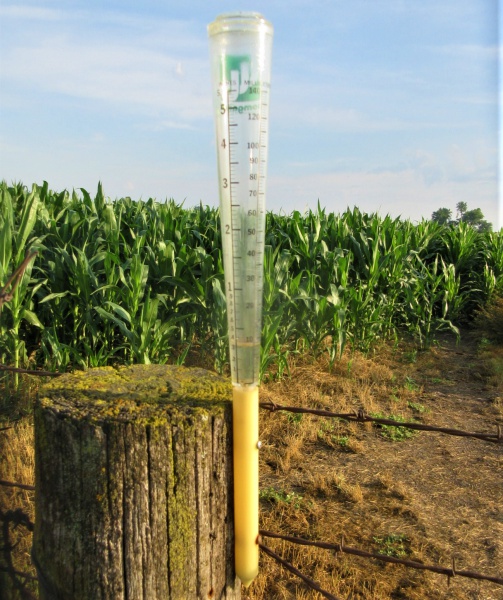 Doug Lawton, like most farmers, is ever hopeful and watchful for good, gentle rains.  He keeps a gauge at the entrance to nearly every field.

So, in these circumstances of uncertain profitability and increasing financial risk, is farming still interesting and fun?

Doug is 65, Karen is 62 and Doug says “if I keep my health” he’d like to keep farming “for another five years.”  So it must still be reasonably interesting and fun.

“Interesting?” he says, thinking out loud. “Well, the way technology is evolving, that’s really interesting.  And when you think about it, there was a lot of technology that became available five years or so ago. Those were pretty good years, and so a lot of us were able to invest in that technology.  Now, in these years that haven’t been so good, you see more people making due with what they’ve got.  If they really need to buy equipment, a lot of them are going to buy a good used machine instead of a new one.”

And how does he rate farming’s “fun factor”?  (Note: Farmers don’t use this measure, and they look at you oddly when you ask them about it.)

But when you’re in it for the long haul — and there have been Lawtons farming around here for well over a century — you know it’ll eventually be fun again.

2 thoughts on “Lawton corn head-high on the 4th of July but will it be profitable? “Probably not.””