But I absolutely love it that the first SHS “alumnus of the year” being recognized by the Shenandoah Iowa Education Foundation is basically just a really good person.

You know, maybe that’s what SHS has done best over the decades – produce thousands of good, caring people. 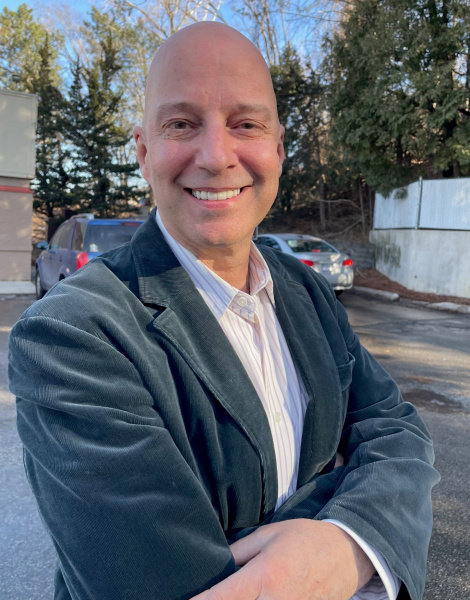 Kyle Horn, 58, a 1982 graduate who now lives in Des Moines, was nominated and selected because he has focused on helping people who need an advocate, a boost and often a second chance.

Horn is among those who will be saluted this Saturday, March 26, at the 150th anniversary “Excellence in Education Honor Banquet” at the Elks Lodge in Shenandoah.  Tickets for the event are still available from education foundation board members.  It starts Saturday with a social hour at 5 p.m. and dinner starting at 6 p.m.  The “150th anniversary” refers to the community’s ongoing celebration of its sesquicentennial.

He is best known now as the founder and director of the 8-year-old program, “America’s Job Honor Awards” program.  Now operating in four states and building, the program seeks out people who have overcome very challenging circumstances to become valued employees for companies big and small.  The employees might have overcome developmental disabilities or injuries; be recent immigrants who’ve had to learn new languages and cultures; overcome alcohol or drug addictions, or have re-entered society and the workforce after serving criminal sentences.

Horn tells their personal stories – with exceptionally well-done videos – and then organizes large ceremonies that recognize the individuals as well as the companies who have hired and benefited from the individuals’ good work.

For Horn, this is more than the humanitarian good work that it certainly is.  Because he spent the first two-thirds of his career in industrial management and employee recruitment, he fully understands how difficult it is for companies to maintain or grow their workforces.  The stories he’s telling in the awards program prove that workers who’ve overcome sometimes severe hardships can indeed become among the best, most loyal and dependable employees that companies have. 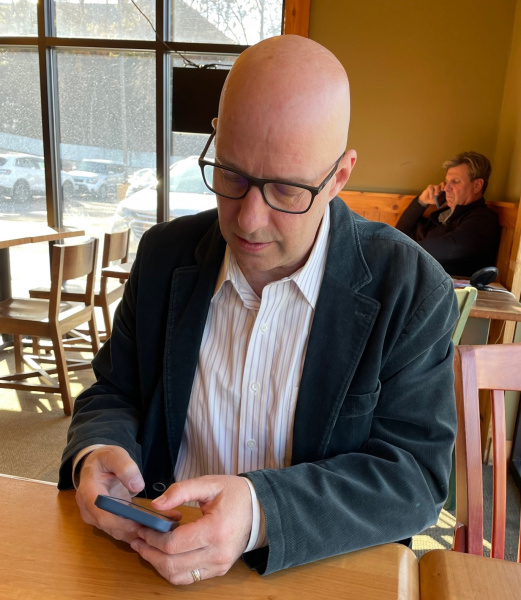 Kyle Horn has become one of the most inspiring storytellers anywhere. His work changes people, companies and communities.

One of those stories and awards that best illustrates all that is Horn’s 2019 honoring of his fellow Shenandoahan Bob Finlay, who for 36 years has worked at the Depot Restaurant & Lounge after recovering from a crippling farm augur accident in his boyhood.  If you haven’t already seen the Finlay story that Horn did for the award presentation, which was held in Des Moines, you can access it on this website:  https://www.jobhonor.org/.

That story is not only deeply touching, it is powerfully inspiring.

And it really inspired old friends Bill Hillman and Jeff Johnson to nominate Kyle Horn for the “Alumnus of the Year” honor.  Hillman is Finlay’s Depot boss and friend for life. Johnson, a SHS classmate of Horn and a professional in TV and video production, was in the audience three years ago and saw the Finlay award.  Johnson said he realized then not only the merit of Finlay’s story, but also of Horn’s sharing of that story.

“Kyle Horn is a guy who has grown from being an ornery kid when we were growing up to now being a champion for people,” said Johnson, who lives in the Des Moines area. “He leads with his heart in all that he does.”

Johnson, whose work includes being a TV producer for football and basketball games at his alma mater Iowa State University, said his own friendship with Horn started in fifth grade, continued through high school, lapsed for a few years, then bloomed again when both realized they were doing a lot of work in Ames and started meeting for lunches.

“In our junior high and early high school years, we shared two things,” Johnson said. “Our sense of humor and our fear of being crushed in 9th grade football. Back then, I think that combined, we weighed about 198 pounds. I swear we’d high-five each other after each practice because we’d survived.” 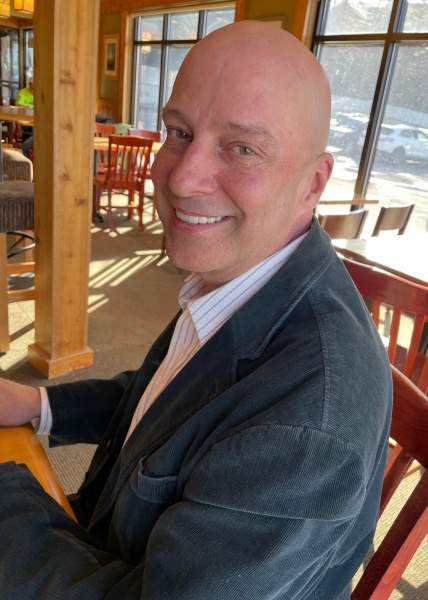 Horn is the son of Marita Horn, who worked 37 years at the medical center and is now retired in in Shenandoah, and the late Ola “Junior” Horn, who had his own carpet cleaning business.  Kyle has two siblings, Julie Boysen, of the Class of ’78 who still lives in Shenandoah, and Jay Horn, Class of ’80, who lives and works in West Des Moines.

Kyle looks back at his high school years, and “I realize what great classmates and fantastic teachers I had,” he said over coffee when we met recently in Des Moines. “It was a huge blessing for kids coming up through the grades in Shenandoah back then that we had teachers who were personally invested in their students.  Besides the subject matter of their classes, they were also teaching us tremendous values of moral character and civic character.”

He went on to Iowa State U., where, he said with a wince, “I became kind of a directionless young man.  I didn’t finish there.”  He hadn’t participated in any music in high school, but at ISU, he “started playing a lot of guitar, strapping on a harmonica, and doing (Bob) Dylan.  I played in several bands, none of any consequence, and had a lot of fun.  But I thought college was kind of getting in the way of my career as a musician.” He winced again.

Maybe the best thing about his ISU years is that he met his wife Cevriye Horn, a native of Turkey who was a graduate student in statistics.  She’s now a data scientist with Wells Fargo, the large financial services company, and she manages a team working around the world.

Back earlier in Ames, Kyle went to work in distribution for a Colorado-headquartered chemical manufacturing company that supplied water treatment facilities around the country, and worked his way up to training manager.

“The best thing about that job was that it let me see manufacturing work at all its levels,” Horn said. “It gave me an appreciation for so-called ‘unskilled jobs,’ and that was the earliest development of my philosophy that any honest job is honorable work.”

After 10 years there, he moved on first to a medical supply company and then as a branch office manager in Des Moines for the Manpower staffing program, which finds and screens temporary employees for companies.

“That experience with Manpower was another eye-opener for me,” Horn said. “We all like to hang out with people who are like ourselves, you know?  People with careers on a good arc.  But because of my job, I also was running into a lot of people out there who were struggling. At that point, I had a pretty dismissive attitude about people not working.  There were a lot of jobs out there and my thought then was, ‘Look, if you’re not working, why not turn off the TV, get off the couch and go work?’

“What I soon realized was that there were a lot of people who were really hurting. What I learned was that a lot of people had been dealt a terrible hand of cards, and there was no way they were going to be able to work without some help and encouragement.  I became converted, in a spiritual sense, that rather than condemning individuals, I became an advocate for many of them.  I repented in my own head.”

It became his mission to connect good potential employees with good employers. Specifically, he worked at convincing the employers that it was not only good, but also profitable, to give people “second chances” at careers after they’d dealt with their personal problems.

“We all claim to embrace rehabilitation,” Horn said, “and yet, we too often reject the rehabilitated.” 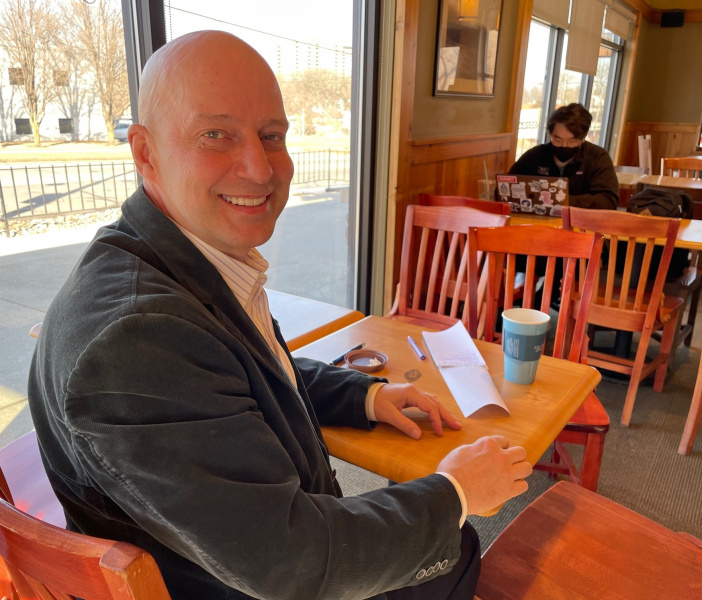 Kyle Horn may have been “ornery” earlier in life, but he now is “a champion for people” who “leads with his heart in all that he does.”

He began campaigning with business associations, trade groups and individual companies. The “America’s Job Honor Awards” evolved from that.  He thinks about taking the program nationwide eventually, but for now he has made it a major success in Iowa, Illinois, Minnesota and Wisconsin.  Each year in each state, the program honors two employees who’ve overcome significant challenges, and two companies that have hired and benefited from such people.

Key to it have been the 4-minute videos that compellingly tell the individual stories.

“I’d never shot video in my life, but I knew I had a penchant for telling good stories,” Horn said.

He contracted with Eric Scrivner and his Silver Shutter Productions company in St. Charles, Iowa, and they began videoing and producing those stories.  The first time they made a “Job Honor Award” and played a video, which was at a 2014 convention in Cedar Rapids, “we got a standing ovation, and I knew right then we were doing something right.”

It is good, honest work that Kyle Horn is doing, telling stories about good, honest and honorable people who are now working.

“It is so rewarding to be able to celebrate these people,” he said. “In many cases, others have hardly noticed they’re alive.  Most of the time, we’re giving them the first awards they’ve ever received.”

The author of this story, Chuck Offenburger, is a member of the board of directors of the Shenandoah Iowa Education Foundation. You can email him at chuck@offenburger.com or use the handy form below to comment on this story.

3 thoughts on “Kyle Horn, 1st “alumnus of year” in Shenandoah, reflects what we hope alma mater does best”