HAVANA, Cuba, April 15, 2017 – So here came a dozen of us, representing Plymouth United Church of Christ in Des Moines, all of us on our first trip ever to Cuba, visiting Plymouth’s “sister church” Ebenezer Baptist in Havana.

I’d read, heard and seen enough about what Cuba is like nowadays that I was not surprised at the vintage American cars, generally from the 1940s and ’50s, still being used as taxis.  The Cuban music was as good, loud and lively as I’d expected. The coffee was as good as I’d hoped – bold and doctored up with sugar.

The Cuban people? Friendlier and more hospitable than you can possibly imagine.

All of the above?  As anticipated. 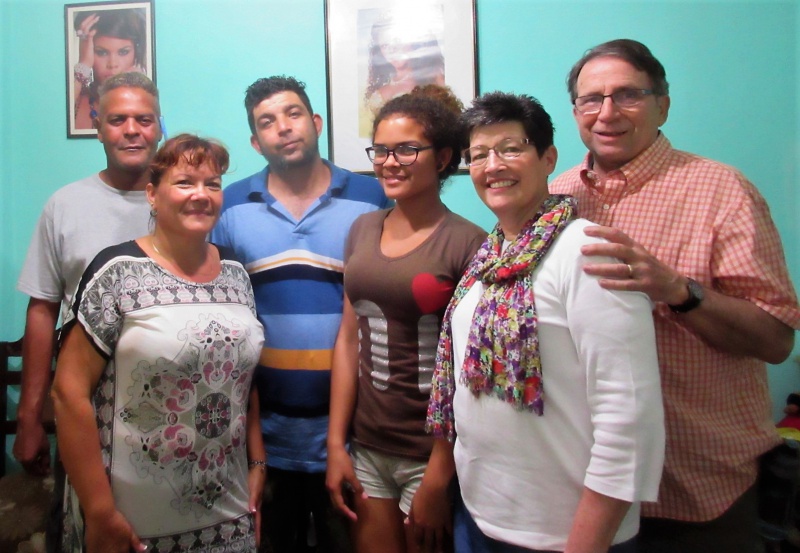 A Saturday night dinner in the home of Argelio Diaz and Soraya Covillen Hernandez (left), with interpreter Javier Vazquez, the couple’s daughter Daniela Diaz Hernandez and guests Carla and Chuck Offenburger. The host family and Vazquez are all members of Ebenezer Baptist Church in Havana, Cuba.

But the roosters, they surprised me.

They crowed every morning, everywhere I was, including in the heart of this capital city of 2.1 million people.  The roosters are used in sacrifices in Afro-Cuban religions, they are eaten, and yet they proliferate.

There were other surprises that are far more important.

Today, I’m going to highlight five of them as I start a series of stories about our adventure:

–CUBA IS ACTUALLY A VERY SMALL PLACE, especially for the prominence it has had in world affairs over the past 60 years.  The island nation is 780 miles long, 119 miles wide at its widest, 19 miles wide at its narrowest, for 42,426 square miles.  The state of Iowa, for comparison purposes, has 56, 272 square miles.  Total population of Cuba is 11.2 million, more than three times as many people as Iowa has.  (But the Iowa statistic that Cubans all seemed to love hearing was that while we have only three million people, we have more than 22 million pigs. Cubans, who love pork, were astounded.)

–THE COMMUNIST PARTY OF CUBA, which has controlled the country for 58 years, is aging and changing. “We have the idea in the U.S. that Communism is of the left,” said our guide Stan Dotson, of Asheville, N.C., a former Baptist minister and college professor who has made more than 30 trips to Cuba since the late 1990s. “But in Cuba, at least, Communism is very conservative.” Rev. Raul Suarez, a retired Baptist minister in Havana, has been a member of the National Assembly, or parliament, for 25 years and describes the changes. “I am not a member of the Communist Party or any other party,” he told us, “and now there are many others like me in parliament. We are changing the economy, while avoiding the ruptures of the past.  We have helped start 500,000 small businesses.  We are turning more control over to civil officials. It’s a de-centralization, kind of a revolution within itself.” 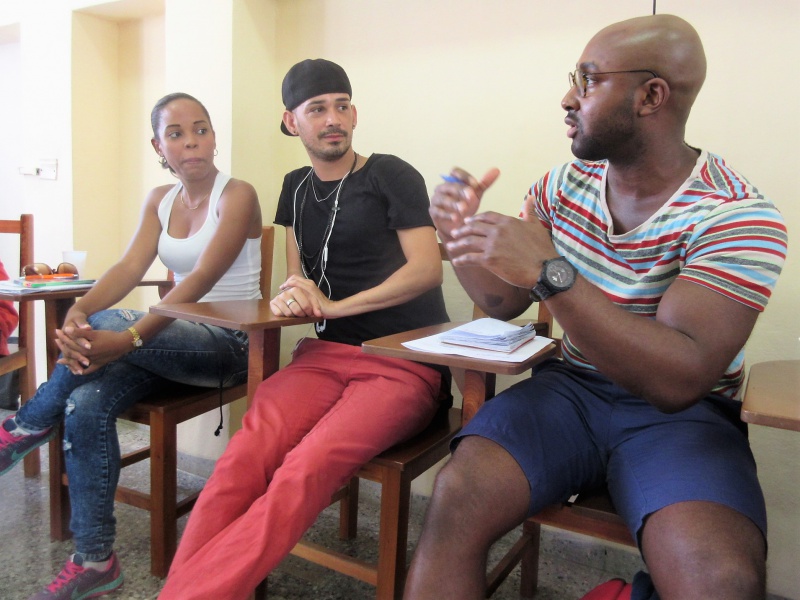 –A NEW REVOLUTION OF RISING EXPECTATIONS, TOO.  Actually, this was not a surprise to me but it might be to some: Cuba’s young people have seen just enough of the internet that they are longing for affordable or, better-yet, universally-free wifi service.  It’s only available free now in a few public squares. There are internet vendors who charge a substantial fee for an hour’s use of it. Business offices are just starting to buy and use it. The young also want economic changes, more career opportunities and better pay. They’d prefer to stay in Cuba if all that becomes available here soon; after all, they’re Cubans and this is home.  But demographics show young people are finding more ways to leave Cuba, too.  Darlys Safora Mayea, who is studying accounting and finance in college while working in public education programs, says “the delay in technology arriving here may be an advantage in some ways in preserving our culture, but in my work with other young people, it’s clear that you can’t deny people the use of new technology.  The goal, I think, should be to prepare young people here to use the technology for education and other good purposes. But at the same time, we all appreciate being able to relate to people around the world so easily.” The Cuban government should probably recognize the internet as the essential tool that it is, and make it available to all.  An alternative would be for the government to partner with some multinational communications company that could do it right for the whole island. Now, while I am advocating this, I must admit that during our eight days here, neither my wife Carla Offenburger nor I brought along our smart phones, laptops or tablets.  We’d been told ahead of time wifi internet service would be very spotty, expensive and inconvenient.  It was the most “unconnected” we’ve been in 20 years, and frankly, it was heaven!

–MOST OF CUBA IS VERY RURAL.  Its agriculture is in transformation, and there appears to be tremendous opportunities for partnerships with Iowa equipment manufacturers, agronomists, cooperatives and even individual farmers. I’ll be writing more about this.  But, for now, the Cuban government’s ownership and operation of huge collective farms and major agribusiness companies has been a failure; it’s just taken them 50 years to realize it.  Meantime, the U.S. embargo of trade with Cuba – especially in agriculture – has been a failure; it’s just taken us 50 years to realize it.  I’m telling you, if I could take a half-dozen of our good farmers in Greene County, Iowa, where I live, plus one of the Landus Cooperative facilities managers, an agronomist and a good country banker, we could go to Cuba and make a huge start in the ag transformation nationwide. We would report to work directly for Pedro Quintero, 69, an agricultural engineer who has farmed for 50 years – the first 30 helping run the large collective farms, the last 20 running smaller coop-owned farms. And for the last seven years, he has directed a church-owned 7-acre organic farm, where we sat together eating a picnic lunch in the shade of coconut and mango trees, just outside the town of San Antonio de los Banos, 30 miles southwest of Havana. Quintero is brilliant and visionary. “I believe we could put our organic fruits and vegetables from Cuba into stores in America quicker and fresher than most American farmers could,” he said. 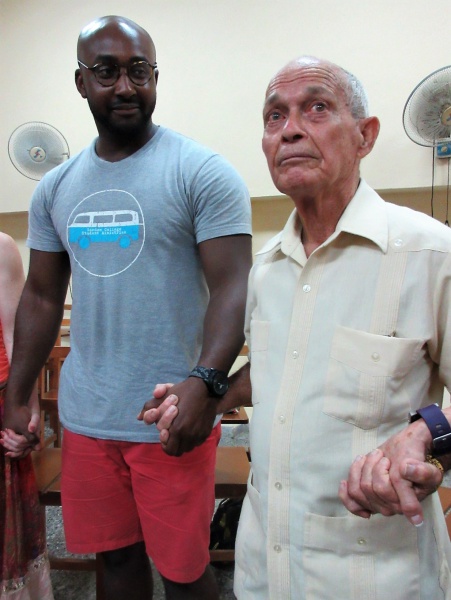 –CHURCHES IN GENERAL ARE THRIVING IN CUBA. This is a major story that I had somehow missed, and I think most Americans have missed it, too.  After the Soviet Union was dissolved in late 1991, Cuba has undergone almost as many changes as the former Soviet Republics that suddenly became independent nations again.  From the early 1960s to the ’90s, the Soviet Union had become the biggest supplier to Cuba of nearly everything – food, oil, manufactured goods, military hardware, you name it.  Without all the Soviet aid, the economy of Cuba collapsed. That era now is often referred to as the “Special Period.”  The Cuban government from the revolution in 1959 to 1991 had officially been “atheist,” and churches were repressed and oppressed. “When the economy went through the floor, there were terrible, terrible times in Cuba,” recalled retired Baptist minister Rev. Paco Rodes in the city of Matanzas, 50 miles east of Havana, when he talked to our group. “People needed hope. They needed the church.”  His brother-in-law Rev. Raul Suarez, the Baptist pastor in Havana mentioned above, was also then the head of the Cuba Council of Churches. Suarez had personally known Cuban President Fidel Castro since 1984. He wrote to Castro and asked for a meeting. It turned into a two-day televised conference in 1990, with many pastors telling horror stories about 30 years of religious discrimination.  Suarez hit hard on the idea that Cuba’s Christian churches – if they’re indeed following the principles of Jesus Christ – “are as revolutionary as the government is,” as he recounted for us.  Castro, who had been educated in Catholic Jesuit schools in Cuba, listened and actually agreed. He ruled that the repression of religion had been an “Error of the Revolution.”  A year later, the Cuban constitution was amended, making the government “secular” rather than “atheist” and granting religious freedom.  There has been a re-emergence of church life, in almost all faiths.  And in recent years, the evangelical mega-churches have really grown in Cuba, just as in the U.S. All that changed the ministry of Rodes, Suarez and other pastors in the second half of their careers.  “Really, it felt like we got to start living in a different country,” said Rodes.  Added Suarez:  “A big part of my life has been teaching Marxists and Communists that you could be as revolutionary as they were while still worshipping in your church.  And I taught Marxists and revolutionaries that they could be involved in church, too.”

SO, A BIT MORE ABOUT RELIGION, in starting this series.

In the past five years, Plymouth United Church of Christ in Des Moines, which is now Carla’s church, organized a “Cuba Partnership Team” and started building a “sister church” relationship with Ebenezer Baptist Church, which is located in the borough of Marianao in the southwest part of Havana.  That is the church that for 38 years was headed by Pastor Suarez, who retired in 2009. His daughter Rev. Raquel Suarez Rodes is now one of three co-pastors at Ebenezer, serving with Rev. Amos Lopez Rubio and Rev. Idael Montero Pacheco. 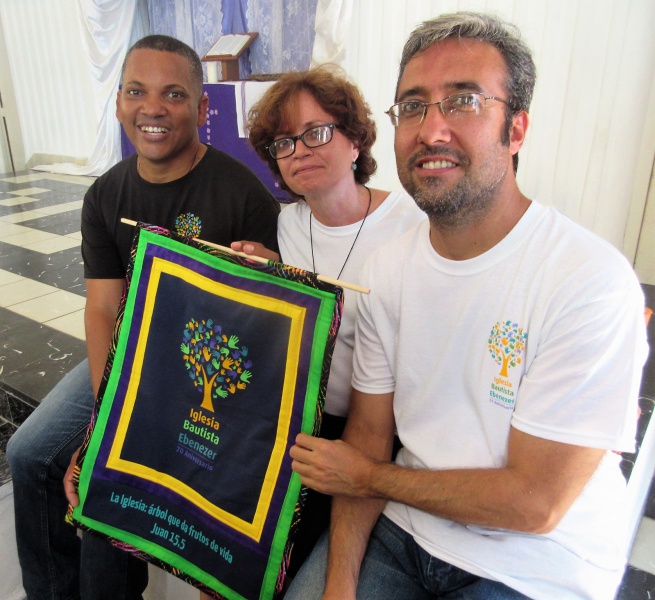 It was been fortuitous that this is happening just as the governments of the U.S. and Cuba have agreed to begin working toward “normalization” of relations between our countries.  That surprise announcement was made Dec. 17, 2014, evidently after Presidents Barack Obama and Raul Castro had been independently lobbied by Pope Francis to a launch a new era for the neighboring nations.  And just over a year ago, Obama visited Cuba. Traveling with him then was U.S. Secretary of Agriculture Tom Vilsack, the former Iowa governor.

Of course, there is much interest and concern, both in the U.S. and Cuba, on whether the push toward normalization will continue with the new American administration headed by President Donald Trump, and with a new Cuban administration starting next year after the retirement of President Castro.

Vilsack spoke to us and other Plymouth church members the Sunday before we departed, and his insights proved very helpful.

We arrived in Cuba on Wednesday, March 29, just in time to attend the anniversary service celebrating Ebenezer church’s 70th anniversary of founding.  We returned home on Thursday, April 6. 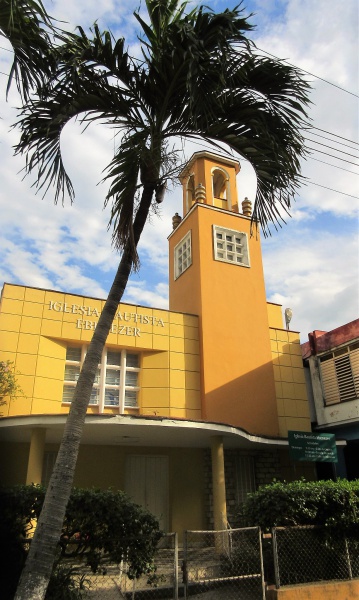 Our visit was more a cultural, religious and educational learning experience than a mission trip. We lived in church-owned dormitory-like accommodations. We ate most of our meals in the churches’ dining halls.

Carla and I feel like it was the best international trip we’ve ever taken, probably the most educational.  We came home humbled and inspired.

It occurred to me while we were there that probably the best thing about going to Cuba with a church group – and having the accommodations we did – is that we spent all day, every day, with average, real Cuban people.   I’m going to introduce you to a bunch of them in coming days, and I hope you’ll follow along on this website. 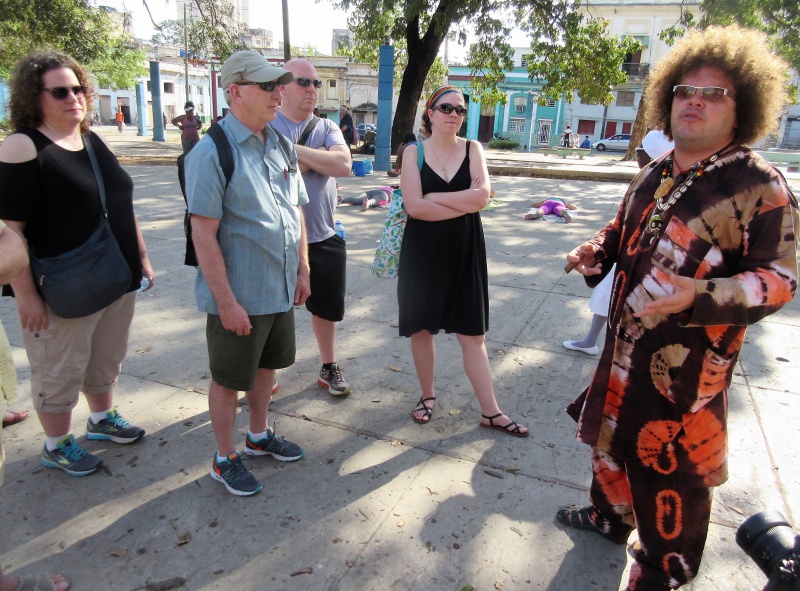 Cuban social-political historian Elias Assef (right), standing in a park in central Havana, talks about Afro-Cuban religion practices that are common today, with Plymouth church members Rev. Brigit Stevens, Neil Fagan, Joe Stevens and Amanda Murphy.  Assef, who is quite a character, said he prefers “to dress African — it’s a sign of my resistance to the new world.”

5 thoughts on “Meet Cuba’s people on their turf, and you’ll be surprised and inspired”