COOPER, Iowa, October 9, 2013 — The Eva Leonard story returns to a local stage this weekend (Oct. 12 and 13) when the Greene County Historical Society presents a musical review of the life of the Grand Junction native who became one of the nation’s major theatrical stars of the 1920s and ’30s.

Nicole Friess Schilling will sing and dance the lead role in “Eva – The Woman, the Talent, the Mystery,” at 7:30 p.m. Saturday and again at 2:30 p.m. Sunday at the Historical Museum in Jefferson.

The story was researched, written and will be narrated by retired radio reporter Jerry Roberts, with Cheryl Nailor playing the piano accompaniment.

The performances are free, but in order to be sure there are enough seats, those who want to attend must pick up free tickets ahead of time at the Printer’s Box in Jefferson.

When the show debuted here with one performance in 2007, a theater was set-up in the front reception area of the museum, and it was packed.  The next spring, it played to a capacity crowd in the Fine Arts Series in Perry, too.

That demonstrated the public interest that still exists in the life, career and mysterious death of Leonard, who ranks as one of the most famous Greene Countians ever.

She was born on a farm near Dana in 1898 and graduated from the Catholic high school then in Grand Junction.  Her mother Harriet “Hattie Mae” Leonard ran a coffee shop in Grand Junction, and her father Frank Leonard operated a livery stable.  She had a brother Claude Leonard.

Eva went on to graduate in interior decorating at Drake University.  During her college years, her singing and dancing ability were discovered and she was soon being featured in musicals and radio productions in Des Moines and Chicago.  She came to the attention of famed New York City producer Florenz Ziegfeld, and he made her an icon of his “Ziegfeld Follies” shows and other musicals. 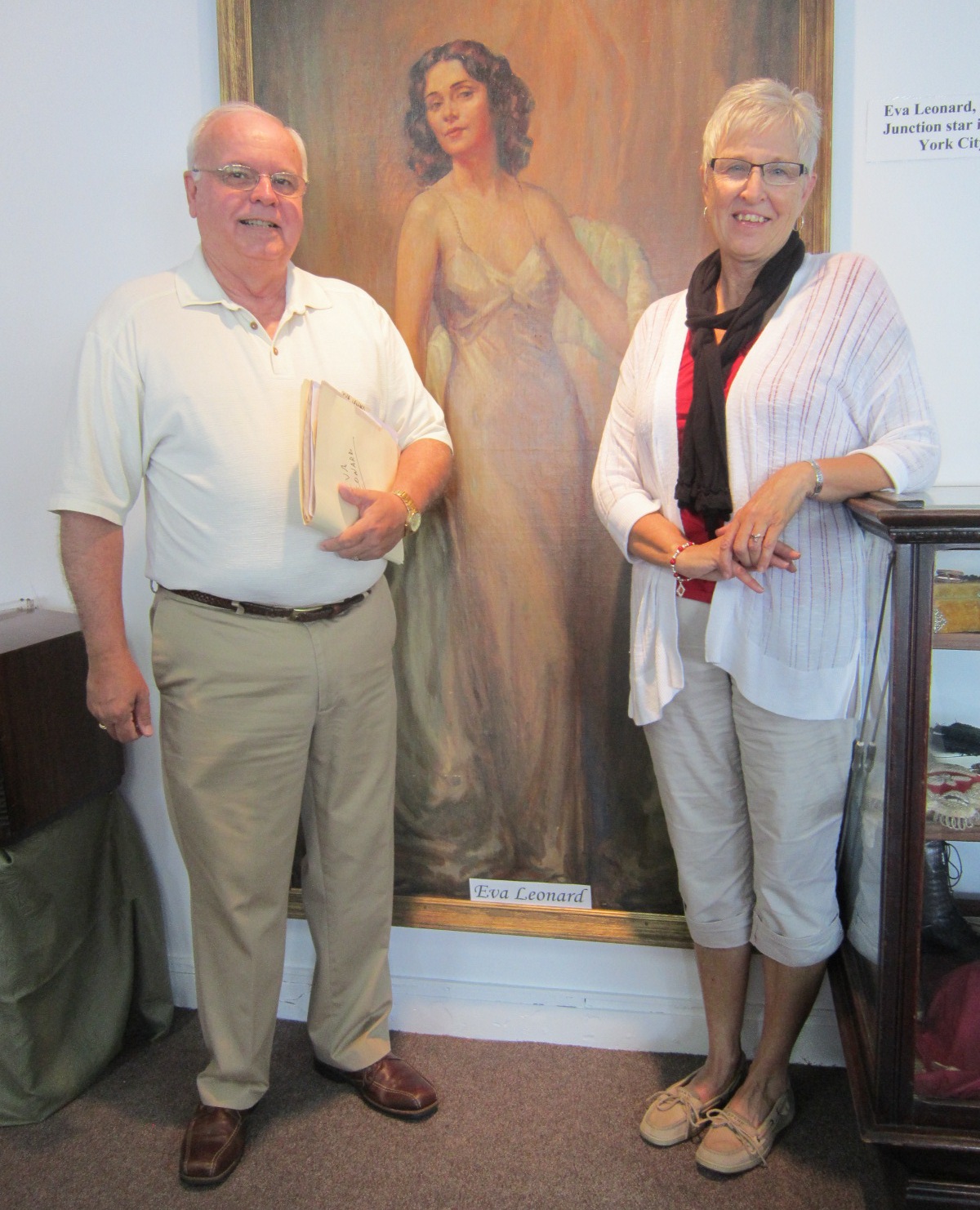 Researcher-writer-narrator Jerry Roberts and accompanist Cheryl Nailor are shown here at the full-length oil portrait of Eva Leonard which hangs in the Historical Museum in Jefferson.

Leonard’s beauty and flirtatious manner were legendary.  The New York City press nicknamed her “the Venus of Iowa,” and carried many stories about the string of suitors always after her.  She was engaged once or twice, but never married.

“She was a huge star, just huge,” said Roberts, basing his judgment on extensive research.  “Besides her great talent and beauty, she was also a really good promoter.  She knew how to work the media of her day.  They loved covering her.”

Leonard starred into the 1940s, when she retired from the stage at the age of 45 and began working in interior decorating.

She was found by one of her former suitors, George Colby, a portrait artist who was also Leonard’s landlord and lived downstairs from her.  He painted several pictures of Leonard, including the full-length oil portrait that hangs now in the museum here.

Colby told police he heard what sounded like Eva falling in her apartment.  Newspapers back then said that when Colby checked on her, she seemed to be having trouble breathing, but he was able to get her into her bed.  When police arrived, they found her dead with a small pool of blood beneath her head.  They called a priest and doctor.  Roberts said that press clippings and family records indicate there was no autopsy and no death certificate.  But police were quoted saying her death may have been suicide involving alcohol and barbiturates.

Eva’s brother Claude Leonard and a family friend Francis Foley went to New York to claim her body.  When a funeral director in Grand Junction was preparing her body for a funeral at St. Brigid Catholic Church, he saw indications that “suggested Eva had been strangled,” as Roberts wrote in his script.  “So after the services but before the burial, X-rays were taken of the body, and her neck was indeed broken.”

She is buried in Mount Calvary Cemetary in Grand Junction.

Ever since, people have speculated about the circumstances of Leonard’s death.

What does Roberts think?  “This happened in a time in the late 1940s when corruption was common in New York City, and you could buy police silence for a few hundred dollars,” he said.  “There sure didn’t seem to be much of an investigation.  Did she die in an accidental fall, or was she the victim of a crime?  We’ll never know.  But my own feeling is she was a victim.”

Roberts said that until 2007, he was not familiar with the Eva Leonard story.

“I was asked by Jeane Burk from the historical society if I’d be interested in digging into it and writing a script for a show,” he said.  “The deeper I got into the story, the more intriguing it became.”  He said when he learned about the suspicious circumstances of her death, he “was surprised, even shocked.”

He went through the extensive scrapbooks and photos of Leonard’s life that are available in the museum.  And her niece Claudia Leonard Light, who still lives in Grand Junction, made family records available to him.

Roberts and Friess Schilling partnered in the 2007 debut, and their accompanist then was Carson Griffith.  He died last November, but he left his music well-organized, and his widow Betty Griffith handed off the Eva Leonard songs to Roberts for possible future use.  Now, accompanist Nailor has been rehearsing them with Friess Schilling in preparation for this weekend’s performances.

Friess Schilling said the music, about 80 years old, “is really hard, about as difficult as I’ve ever sung.”  She said it is so intricate and demanding that she has real respect for Leonard’s musicianship.  “It goes from sharps to flats for no reason at all,” Friess Schilling added.  “It’s like the composers wanted to show off.  But the songs come off as beautiful.”

She said she is “fascinated” by Leonard’s career story.  “I wonder how she went as far as she did in show business,” Friess Schilling said.  “Obviously she had a lot of talent.  But there must’ve been elements of luck and timing, too.  Who did she know?  What was her break?  And was it pure star power that let her go as far as she did?  Or were people just enthralled with this fresh face out of Iowa?”

There will be free refreshments after the shows and people are invited to spend time browsing the rest of the museum displays then.