COOPER, Iowa, June 18, 2014 — College baseball, which has kept me (mostly) entertained since late January, is now ready to give us a national champion.  Eight teams successfully traveled the challenging “Road to Omaha,” as they refer to it, and the NCAA College World Series is underway at TD Ameritrade Park.

And, oh baby!  Gimme a Moon Pie and a RC Cola — my Vanderbilt Commodores are in the thick of it!  Join me in the cheer we used to do as Vandy students back in the 1960s: “Yeaaaaay RAH! Whole damned team!”

The Commodores opened play Saturday night, June 14, against a rival from the neighborhood, actually, the University of Louisville Cardinals.  Vandy won it, 5-3.  Monday night, Vanderbilt won again, beating the upset-minded University of California-Irvine “Anteaters,” 6-4.  That brought the Commodores’ season record to 48-19.  But more importantly, the 2-0 start in Omaha meant that the Commodores rest until Friday, then play an afternoon game against the Texas Longhorns, who are 45-20 overall and 2-1 in this CWS.  A victory Friday puts my team in the best-of-three championship series next Monday, Tuesday and possibly Wednesday (June 23-25).  A loss Friday means the Commodores would play Texas again Saturday night, with that winner going to the championship series.

Vanderbilt seems to be playing its best ball of this long season.

And we Offenburgers are working hard as fans, too.

I’m constantly washing up all of my Vanderbilt sports apparel, so that I can always wear the same clothes on game days.  I’m trying to keep Carla Offenburger from confiscating my special Vandy baseball cap, the one that I believe has good luck woven into it,.  I must confess it’s a baseball cap that is older than most of the players on this year’s team, and so Carla may be right when she says I look like “a doofus” when I’m wearing it.  You can see it in a couple of photos with this column. 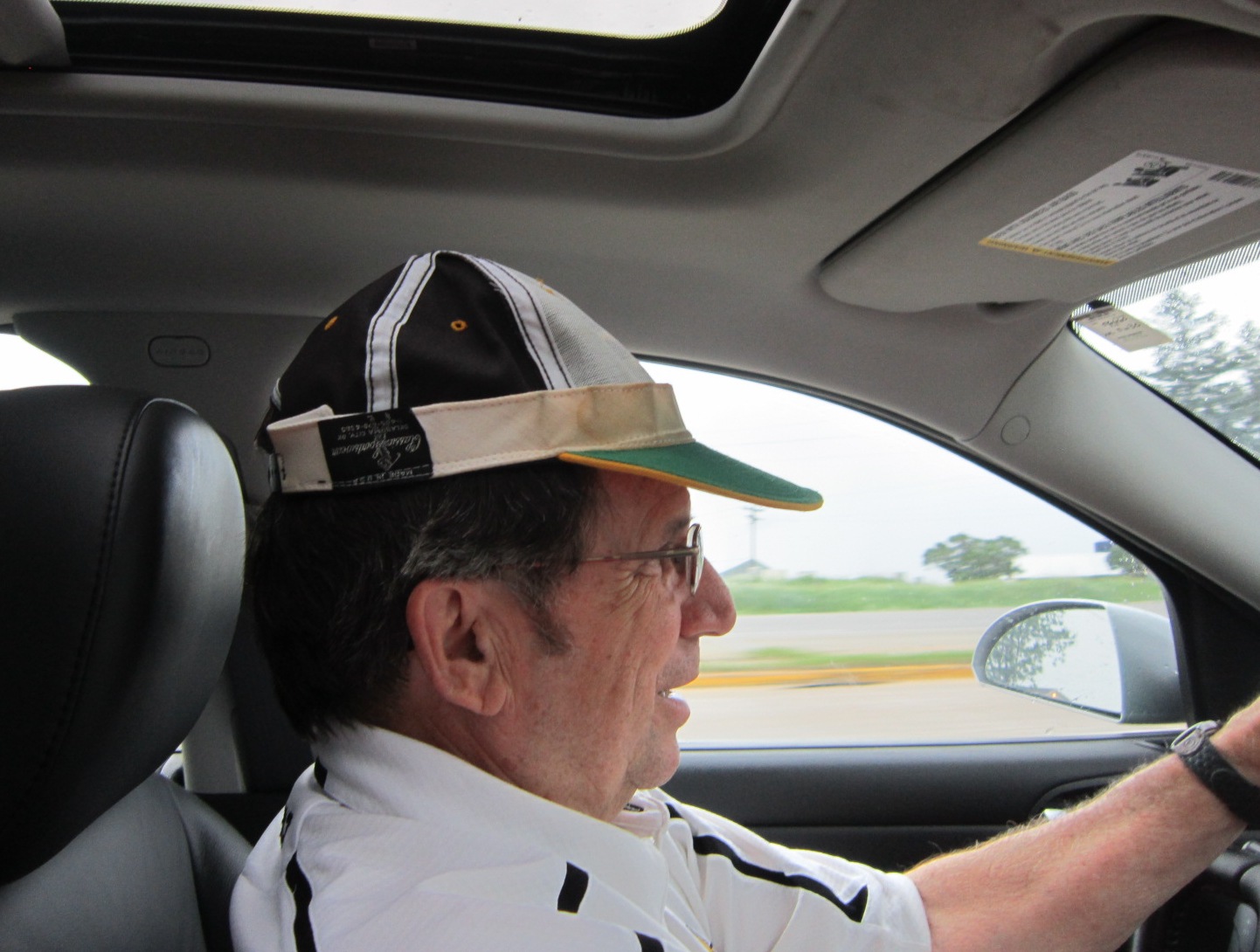 When they said we Vanderbilt fans “need to get our rally caps on” when our team was trailing Stanford in the NCAA Super Regionals, we did — even though we were just following the game on Twitter while we were driving across Iowa.

We are hosting some of my ol’ college friends at our farmhouse, making the 2-plus hour drive to Omaha to join other old friends who are staying in Omaha or Council Bluffs.  The Vandy crowds at the games have been big, good-natured, loud and fun.  At the first two games, I’d guess we’ve probably had 1,500 to 2,000 cheering for the Commodores.  Those numbers will easily double for the next games, as more and more VU fans are flying into Omaha from the campus in Nashville and from their homes across the U.S. and beyond.

One reason you need to root for Vanderbilt is because this year’s Commodores are a great reflection of America, coming from 14 states and having outstanding racial and ethnic diversity on the squad.  Jerome Boettcher, a writer on the Vandy athletic communications staff, wrote a terrific story about that in the April edition of Commodore Nation magazine, and you can read it by clicking here.

When Vandy had an easy time of it in the NCAA regional tournament, Ryan Schulz, another writer on the athletic communications staff, noted that when the Commodores pitchers are sharp, the team is pretty tough to beat. “At Vanderbilt’s current pace, it may not matter who gets the call,” Schulz wrote. “Every game is a laser show with pitchers routinely hitting 95-plus on the radar gun. It’s an embarrassment of riches in terms of power arms, and there doesn’t seem to be an end in sight with young arms waiting in the wings for their opportunity to come.”

The best four pitchers right now seem to be sophomores Carson Fulmer and Walker Buehler, junior Adam Ravenelle and freshman Hayden Stone.  Tyler Beede, a junior who was recently a first-round draft choice of the San Francisco Giants, led the nation in victories a year ago but he has frequently struggled this year and is only 8-7. 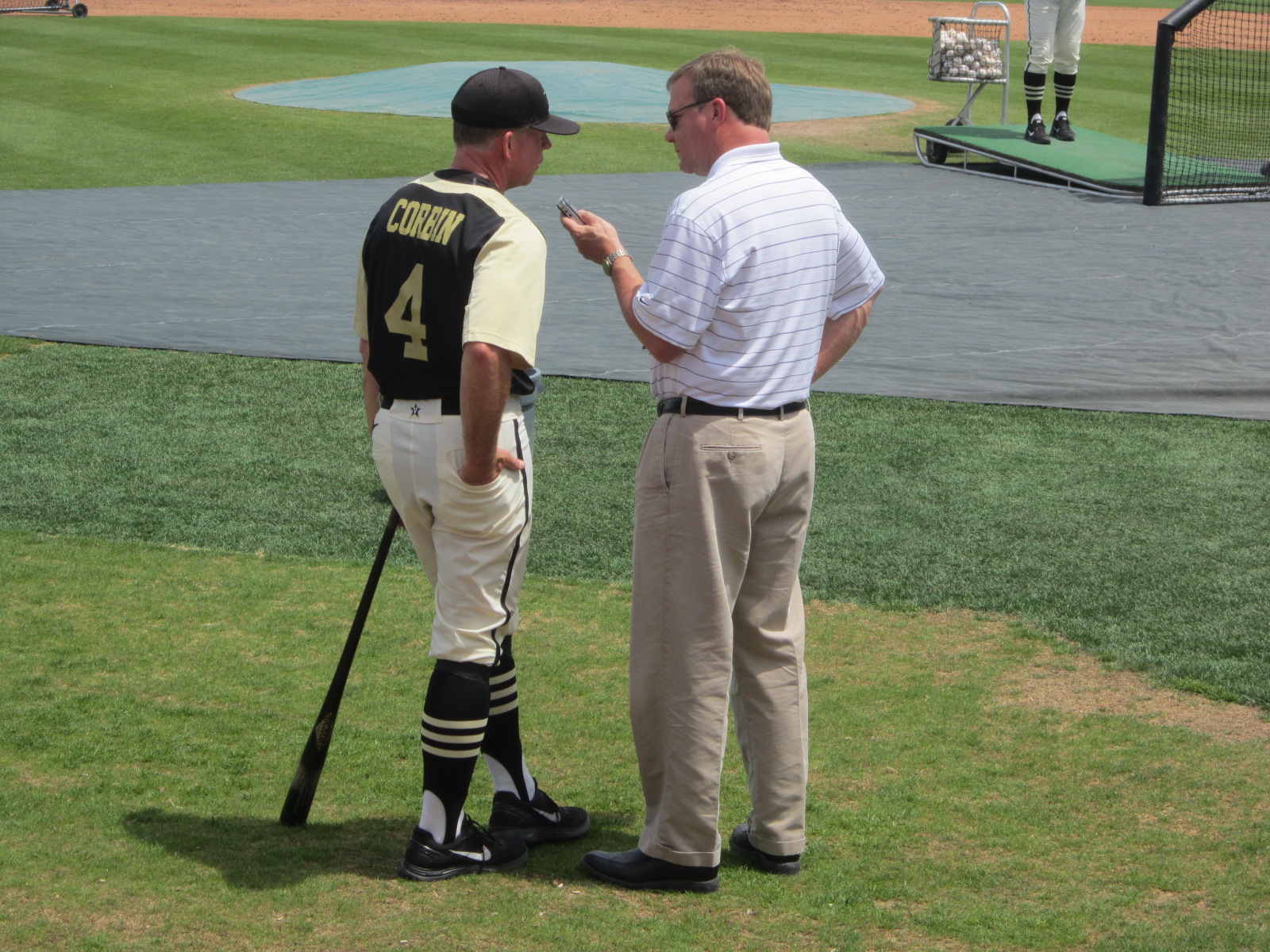 But the biggest reason this Vanderbilt team has reached the College World Series — and the reason my alma mater has developed one of the nation’s most consistent and best baseball programs — is because of the leadership, baseball knowledge and teaching skills of head coach Tim Corbin.

The 52-year-old Corbin is in his 12th year as Vandy’s head coach.  In early May in a game against the Missouri Tigers, Corbin got his 500th VU victory, and we Offenburgers were thrilled to be in the crowd there in Columbia to see it.  His Commodore teams have averaged more than 41 wins per season, have played in the NCAA tournament nine straight years, and qualified for the College World Series in 2011, finishing in the top four.

Corbin has truly worked his way up in the baseball world in a non-traditional way, with stops in a lot of places you wouldn’t consider to be baseball hotspots.  He was born and raised in New Hampshire, played his college ball at Ohio Wesleyan (so he was a “Battling Bishop,” one of my favorite college team nicknames), became a young head coach at Presbyterian College where he re-started a program that had been dormant, then was an assistant for nine years at Clemson University.

In my time at Vanderbilt, in the second half of the 1960s, the baseball program went from being non-scholarship and barely competitive, to starting a turn-around in 1969.  (You can read about that in another story I’ll be posting soon on this site.)  In the 1970s, ’80s and ’90s, head coaches Larry Schmittou and then Roy Mewbourne made Vandy baseball one of the best programs in the tough Southeastern Conference, winning several league titles.

Then came the Corbin era, and it’s frankly been amazing what’s happened.  Yes, there’s the national recognition.  But maybe even more stunning, baseball is now regarded as the flagship sport of the entire Vanderbilt athletic program.  And Tim Corbin has become, by percentage, the winningest coach in any sport ever at our grand old school. 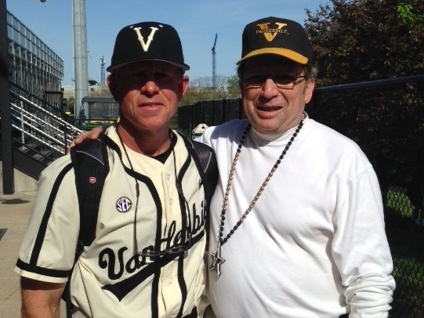 My chance to chat with the coach after the victory at Missouri in early May.

A half-dozen former Commodores are major league baseball stars, including pitchers David Price of the Tampa Bay Rays and Sonny Gray of the Oakland A’s, as well as slugging third baseman Pedro Alvarez of the Pittsburgh Pirates.  Many more are rising through the minor leagues right now.

And there’s been an Iowa connection that is, of course, special to me.

Rod Williamson, Vandy’s veteran director of sports communications, is a native of Parkersburg in north central Iowa, a graduate of Iowa State University and a former sports information staffer at the University of Northern Iowa and at his alma mater.

Then in the 2011, ’12 and ’13 seasons, Spencer Navin — who’d played his high school baseball at Dowling Catholic High School in West Des Moines — became an outstanding catcher for the Commodores, starting his last two seasons.  He is now playing in the Los Angeles Dodgers organization, catching for their Great Lakes Loons team in the Class A Midwest League.

Iowa doesn’t have a player on this year’s Vandy team, but we’ve provided one of the team statisticians, Luke Gude, of Des Moines.  He just graduated in economics and next fall will start studies at the University of Iowa for a master’s degree in actuarial science.  He is the son of Steve and Mona Gude and went to Hoover High School, where he was a good student as well as a second baseman and pitcher on the Huskies baseball team. “I was decent and started, but I knew I wasn’t a Division 1 college player,” he said.

So why did he pick Vanderbilt for his undergraduate studies?  “It was a combination of the academics and athletics, especially baseball,” Gude said. “I’m very passionate about baseball — college ball and pro ball — and I’m obsessive about watching it when it’s played at a high level.”

The team has six students working in support roles — two student managers in the dugout, two statisticians in the stands or press box, and two video operators.  Gude has been one of the statisticians for three years, working five to six hours per day, charting pitches and defensive plays in practices as well as games.  They also frequently are on the field helping set-up for practices, and they sort the laundry when Vandy is playing on the road. 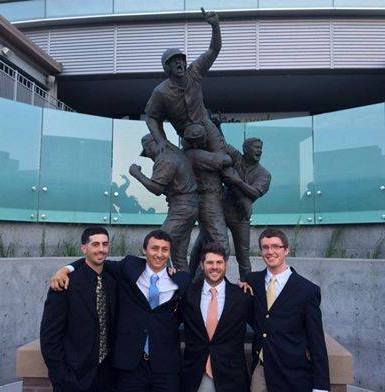 Luke Gude (far right) and the three other seniors who are part of this year’s Vanderbilt baseball team gathered in front of the famous “Road to Omaha” sculpture just outside the main gate of TD Ameritrade Park, where the College World Series is being played.  The others are (from the left) pitcher T.J. Pecoraro, video operator Will Hinson and pitcher Steven Rice.

“I’ve always been a numbers guy, and I’ve loved this work — it’s really been a dream job for me,” Gude said.  “The two managers with the most experience get a stipend, and I’m one of those this year.  But there are plenty of other perqs, too — free travel with the team, free housing once the school year is over, tons of Vandy baseball apparel and equipment, and lots of good experiences.”

He said getting to work closely with Coach Corbin has been an education in itself.

“He’s fantastic,” Gude said. “He does a great job of helping the team develop, and I mean beyond baseball.  He talks to them a lot about growing up, about the importance of doing well in class, about treating others with respect.  And then he’s teaching them to play championship-caliber baseball, too.  He puts so much time into it.  On the road, you’ll see him in the hotel lobby, 10 hours before the game, pouring over the scouting reports, stats and other information, putting the game plan together.”

So, what does the baseball-loving statistician think of the team?

“Pitching is our strength,” Gude said.  “We’ve got all kinds of power pitchers — the staff is just stacked.  Offensively, we don’t have as much power as we’ve had in the past, but we get lots of doubles, and the top seven hitters all have double-digit totals of stolen bases.  Our defense is very solid, especially in the infield.  I think we’ve got a lot of guys with major league potential.”

And his overall experience at the alma mater we now share?