Douglas T. Bates III, great friend of Chuck Offenburger since their college years, was asked to preach the sermon on Sunday, Oct. 21, at the United Methodist Church in the middle Tennessee town where he was born, raised and now lives in semi-retirement. He’s not a member of the Methodist Church anymore, or any church, but he attends several churches regularly – it’s an interesting story you can read in the editor’s note at the end of this. His knowledge of religion in general rivals any layman we’ve known, as you’ll realize if you read the text of his sermon here.

I am confident that there has never been a sermon like this ever delivered in this church. As you can surmise from the title of it in the bulletin, and from my opening line, it is congratulatory statement to you for being in a Methodist Church this Sunday.

Several years ago, this church was on a retreat at Camp Cedar Crest and the minister asked the congregation to list the church’s strong points. Somebody (O.K., it was me) said, “We are right!” The entire congregation roared with laughter. For Methodists, the idea to claim arrogantly that we are right is laughable.

Not so with most Christians. They have to be right (and tell you how right they are) in EVERYTHING. The must be right in:

–how you are saved,
–when you are saved,
–who can preach,
–who can teach,
–what is the best church organization,
–about the mystery of the Eucharist,
–about every nuance of every verse in the Bible,
–and when our Lord will return, even though HE said HE did not know.

So I first congratulate you on being in a church which does not have to be right all the time.

I hurry to say I could preach a sermon congratulating you on being in any church here in Hickman County, but alas, this is the only one that would ask me to preach. And as most of you know, I have not been a member of the Methodist Church or any church for several years, so I am not bragging on MY church but YOURS. 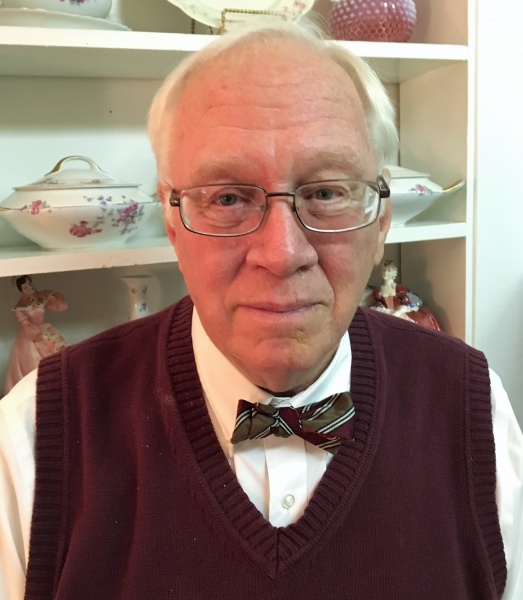 FIRST. I first congratulate you on being in a church so vast. Its membership numbers over 80 million (so I really am not missed). It is second only to our friends in the Southern Baptist Church in numbers among Protestant denominations. By the way, there are 4.4 million of you in Africa.

SECOND. I congratulate you on your history.

In the early 1700s, three students at Oxford University formed a Bible club. They were John Wesley. Charles Wesley, and George Whitfield. Soon others joined, and because of the methodical way they studied the scriptures, the way they met and were dismissed at such precise times, they were mocked with the name, “Methodists.”

The club lasted after their graduation, and indeed, other such clubs came to be founded throughout England. While these three founders continued to attend such clubs, they remained Episcopal and all three were powerful preachers. John Wesley especially was driven to preach and was convicted to come to colonial Georgia to evangelize. The effort did not go well, and as he sailed home to England, a storm blew up. A group of Moravians were on the ship and Wesley marveled at their faith-filled calm. Wesley sought out Peter Bohr when he returned to England and confided in him that he was having real doubts about grace. Bohr, the great Moravian pastor, advised Wesley, “Preach it until you believe it.”

Wesley tried to follow Bohr’s advice but God had a special blessing in store. On May 25 ,1738, while listening to a Martin Luther sermon on Romans at Aldersgate Street, John Wesley felt his “heart strangely warmed,” and neither he nor the world would ever be the same. Whereas before, he had preached in scholarly tones, now he was a man on fire. Gone was the harshness of judgment’s price and in its place was free grace. Also present was a Dickensian concern for the poor. And his words stirred a nation to consider the human cost of wealth and empire.

Now the clubs – the Methodist clubs – survived and they became organizations within the Church of England, sort of like the Gideons of today or the Knights of Columbus for the Catholics. But they were not churches. Indeed, Wesley remained an Episcopal priest all his adult life and was buried in his Anglican robes.

How the Methodists became a church is tied to early U.S. history.

When the American Revolution began, the Anglican priests returned to England. They were priests in the Church of England and thus employees of the Crown .

But who then could administer the sacraments? Wesley’s solution was to ordain Frances Asbury and William Coke as METHODIST bishops in 1784, and all those American Methodists Clubs became Methodist Churches.

The new bishops ordained “circuit riders” who spread the Gospel of Methodist Christianity throughout the land, and by the turn of the century there was a new nation, the United States of America, and a new church, the Methodist Church, the largest Protestant denomination in the new country. There were now 4.000 ordained circuit riders and it was said by folks on miserable weather days, “No one was stirring except crows and Methodist preachers.” Asbury, who suffered from crippling arthritis, crossed the Appalachian Mountains 120 times on horseback.

By the way, one of the men ordained was Richard Allen, an African American, who was denied communion and thus in 1794 started his own church. Asbury, wishing him to be in the Apostolic Succession, ordained him, and thus was formed a separate denomination, the African Methodist Episcopal, or “AME,” as we know it and love it.

My family has biked across Iowa many times and we can attest there is no town so small that it does not have a Methodist Church. In my beloved Dubuque, Iowa, where there are two Catholic colleges, still the oldest church in the town is the Methodist Church.

Now, during the War Between the States, the church split in two – Methodist Church North and Methodist Church South. In 1939 in St. Louis, the two churches reunited. Emmett Thompson from this church was a delegate, and he voted in favor of reunification, much to the disapproval of his sister-in-law Mary Walker Clagett.

In 1968, the United Evangelical Brotherhood Church joined the Methodists, and the church name became The United Methodist Church.

So I congratulate you on your history.

THIRD. I congratulate you on your heroes and heroines, like:

–John Wesley, who rode over 250,000 miles to deliver 40,000 sermons. He collected his own works, and they fill 32 volumes. (The Encyclopedia Britannica is only 24 volumes.) He consistently is ranked as one of Britain’s most beloved historical figures.

–Charles Wesley, who wrote over 1,500 hymns, some of which you heard in the anthem today.

–Fanny Crosby, of Connecticut, who was blind from just after her birth in 1820, nevertheless wrote a cool 8,000 hymns, which have been printed over 100 million times. She is called the mother of congregational singing and is thought by many to be a Baptist because of the gusto with which that wonderful denomination sings her songs. She was a Methodist all her life. 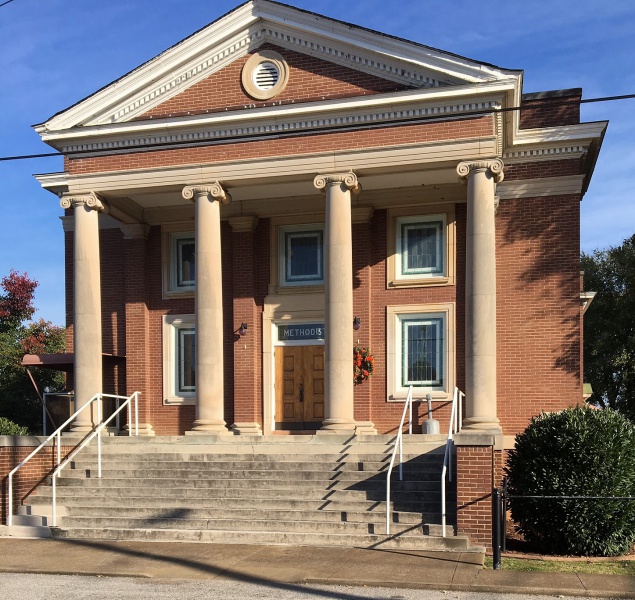 FOURTH. I congratulate you on the history of this church in Centerville.

After church is over today, look south at the old Masonic Building, and you are looking as this church until 1924. Then turn and look back at the beautiful Greek columns of this church house, and think of the noble people who worshipped in those two buildings.

Her members have been the pillars of the community where she sits.

And, remember – women run all churches. Only the Methodists admit it.

FIFTH. I congratulate you on the present: With Joan Jacobs on piano, Daniel Bey on organ, a world class choir directed by Alice Martin, once in a while with the bells donated in memory of my mother Catherine Bates, and Brother Eddie Smotherman’s masterful homilies, every service here is a classic of formal worship

Now, I close with two of John Wesley’s prayers.

His covenant is a powerful prayer for a church as well as for an individual. It’s no secret that her pews are not as full as they once were; she is not as wealthy as she once was. So she can pray:

I am no longer my own, but thine.
Put me to what Thou wilt,
Rank me with whom thou wilt.
Put me to doing,
Put me to suffering.
Let me be full,
Let me be empty.
Let me have all things,
Let me have nothing
Thou are mine, oh Lord,
And I am thine. So be it.

So when we leave her, hold your head high that you have been in a Methodist Church. I congratulate you for her humility, her vastness, her history, her heroes and heroines, her history here in Centerville, her present here.

And as you go, remember another John Wesley prayer:

Douglas T. Bates III, is an attorney in his hometown of Centerville, 60 miles southwest of Nashville in central Tennessee. He and Chuck Offenburger became friends during their freshman year at Vanderbilt University in Nashville in 1965, and have stayed close ever since. The Bates family is five generations deep at the United Methodist Church in Centerville, but a decade or so ago, Doug walked out. “I left the Methodist Church after the then-pastor referred to gays as the ‘scourge of the Earth,’ and said that one could not be a patriotic American without being a Christian,” he explains. “Since the church has such a wonderful preacher now, why not re-join ? Because if they get another ‘dog,’ I will quit again.” He always says now that he is “unchurched,” but that hardly seems the case. Listen to him outline his normal worship schedule: “I attend the Martin Memorial Seventh Day Adventist Church on Saturdays. I attend the Swan Cumberland Presbyterian Church regularly at 9 a.m. on Sundays, and then come into the adult Sunday School class that my son Douglas IV teaches at the Methodist Church, and then stay for the service there. Oh yes, I frequently go to mass at the Catholic Church on Wednesday nights.” And that’s what led him to close his sermon with the “Sign of the Cross” that Catholics recite and use, and which has become a favorite prayer for him. He also frequently says the Catholic rosary. Doug’s wife Molly briefly left the Methodist Church over that same pastoral slur that Doug mentioned, but she resumed her membership as soon as a new, more thoughtful pastor came to Centerville. There are two more interesting points to share about Doug Bates and religion. In 1990-’91, he decided he did not know enough about the churches in Hickman County, so he attended each of the 66 congregations and wrote columns about each – covering their theology, traditions and characters – for the Hickman County Times weekly newspaper. The columns were called “See You in Church.” He sometimes told readers more than some church leaders wanted them to know. Like the time he attended one of the outlying Methodist Churches, and the denomination’s district superintendent happened to be visiting and doing the sermon. “He seems to be a nice man and is beloved by his followers,”Bates wrote in his column, “but he can’t preach a lick.” Then in 2002, he decided to share his deep interest and understanding of the Bible with a wider audience than the adult Sunday School he was teaching. So he recorded his lessons on the whole Bible, brilliantly setting the historical context for all the stories and thus really bringing them alive to modern-day listeners. He called that series “The Bible Will Not Bite You,” and issued it first in cassette tapes. Later he had them re-made on CDs. Those lessons have been heard across the nation and around the world.  You can contact him by using the handy form below here, or by email at dtbatesiii@gmail.com.