JEFFERSON, Iowa, Dec. 3, 2018 — We lost one of our longtime leaders of business and community here last week when Dean McAtee died at 86.  He became a wealthy man by building McAtee Tire, Inc., into a company that at one time had dealerships in Jefferson as well as eight other Iowa towns.  He was a tough competitor in business, the stories go, but he was also generous with his time, talent and treasure for people, projects and events in Greene County and beyond.

I had a terrific visit with him in his last days in hospice care at the Greene County Medical Center. 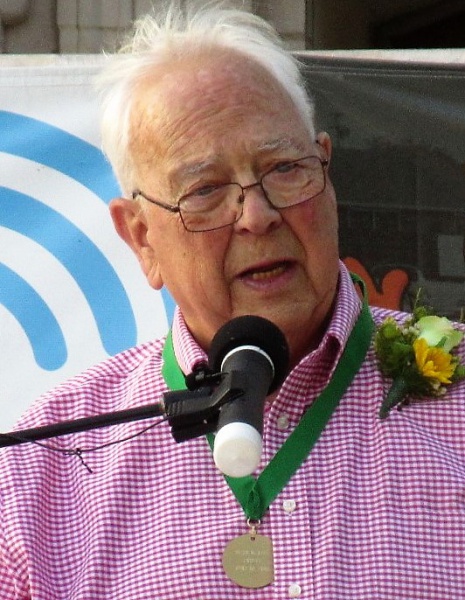 Dean McAtee, speaking in 2016 when he accepted the “Tower of Fame” award during the Bell Tower Festival in Jefferson.

I told him I was well aware of his blessings, because I read the book he self-published in 2015, “Memories of my Full Life,” with editorial help from author Roccie Hill.  A brief passage in the book gave me new respect and admiration for Dean McAtee and the way he lived his life — and I told him that in our final chat.

“My parents never owned their own home or a car,” he wrote. “They were farmhands, and worked for a dollar a day in wages plus free rent and one hog per year.  They always had a garden, as did most people.  They worked for Floyd Aldrich and other farmers for nearly ten years.  It was exhausting labor, but my Mom and Dad were well respected, because they were honest, decent people.

“They were always willing to accept everybody they met for what they were, regardless of what the person owned or owed. This trait of acceptance was one of many great gifts my parents gave me.  Although our family was one of the poorest, they taught me important life lessons that have helped me to be happy and succeed over the years.

“One of the earliest lessons was this: wealth and possessions do not provide a yardstick for the worth of a person.”

It was a great way for McAtee to live.  Would be for all of us.

You can read the full obituary of Dean McAtee on the website of Slininger Schroeder Funeral Home & Cremation Services by clicking here.