COOPER, Iowa, July 4, 2017 — Grab your cameras and head out to a farm on this Independence Day in 2017.  Rural Iowa — at least what we’re seeing of it around us in west central Iowa — seldom ever looks better than this.  Green, lush, full.

As our pals the Lawtons demonstrated Monday evening, the corn is not only taller than the old “knee-high by the 4th of July” measure, it’s actually way over head-high. My goodness, the soybeans are almost “knee-high.”

We should be grateful here.  The past two weeks, Carla Offenburger and I drove across the nation’s breadbasket while visiting grandkids in western Ohio.  We can report that the crops in Illinois, Indiana and Ohio appear to be shorter and later than our Iowa crops, especially their soybeans. 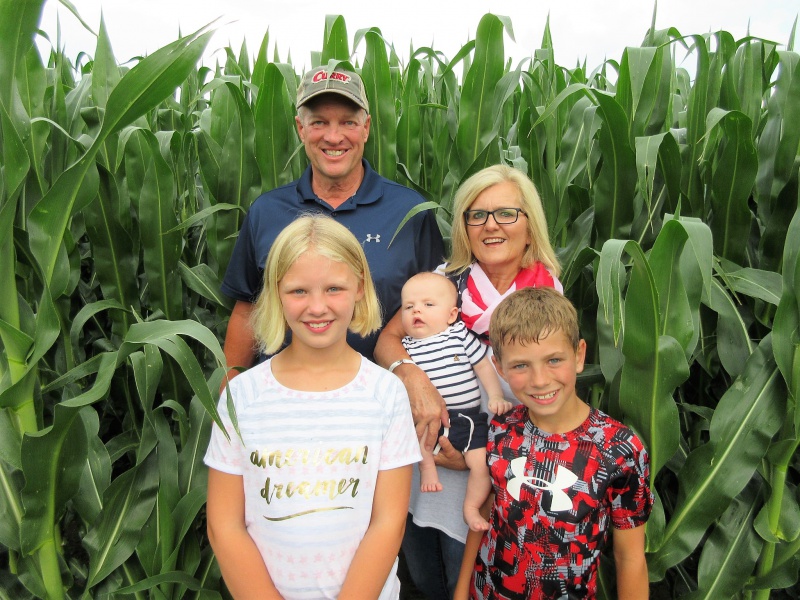 Doug and Karen Lawton, of rural Cooper, in one of their cornfields the evening of July 3, with grandchildren Nathan, Natalie and little Noah Towers.

For all 13 years we’ve been neighbors, as the 4th of July approached, I’ve asked the Lawtons to pick one of their cornfields that seems representative of their crop, and then we take pictures — with various members of the family posing.  Monday evening, we had Doug and Karen, who are raising their 38th crop in the 40 years of their marriage, along with their Towers grandkids, Nathan, 9, Natalie, 8, and 3-month-old Noah, the children of Diana and Justin Towers, of Jefferson.

Doug reported that this field, on the east side of the Lawtons’ home farmstead, was planted April 18 with Curry Seed’s 830-39 corn.  (He then confirmed the planting date with grandson Nathan, who knows nearly as much about the Lawton farm as Grandpa does.)

“We had really good weather when we were planting corn this year,” Doug said. “From start to finish, we had only one day when we couldn’t plant.”  He recalled that on the day he planted the field we were in, “it started raining just as I finished up.” 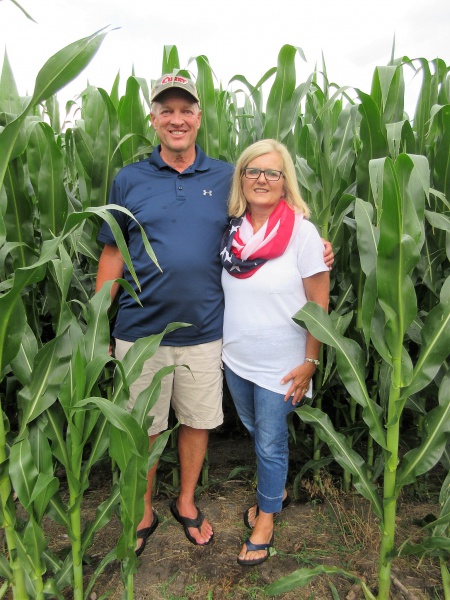 The Lawtons.  They are the 4th generation on the Lawton farm, which is headquartered a mile northeast of Cooper. Doug taught school the first year of their marriage, and they’ve been farming ever since.

As good as the crops look, he doubts they are going to be as bountiful as they were in 2016.  He and Karen compared memories and then said their corn last year “averaged about 210 bushels per acre, and the soybeans were 60 bushels per acre or better.”  It was “one of our best crops ever,” Doug said.

“I don’t think we’re going to have bumper crops like that again this year.  If we keep missing the rains like we have, some of this corn is going to suffer some.  It seems like instead of getting a good steady rain, we’re getting little dribbles.”

However, a half-hour after he said that, we were receiving a nice 4/10ths of an inch rain in our area.

Life is good in west central Iowa on this Independence Day in 2017. 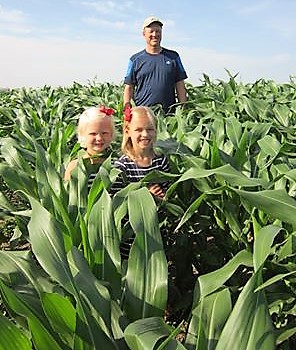 Facebook popped up this “memory photo” on Monday, reminding us of what the Lawton crop looked like at the 4th of July in 2013.  That’s Doug posing with granddaughters Natalie Towers and Maggie Nailor.  Why was that crop so stunted then? “That was the year when it was so wet in the spring that we couldn’t get planted until way late,” Doug recalled. “In fact, I think I remember that on the 4th of July that year, I went out and planted some soybeans in holes that had finally dried out in some of our fields.”