JEFFERSON, Iowa, Jan. 30, 2015 —  When I heard that Chicago Cubs great Ernie Banks had died last week, I immediately thought of Randy Bunkers, co-owner with his wife Phyllis of the famous Bunkers Dunkers Bakery on the east side of the courthouse square in our county seat town of Jefferson. As you undoubtedly know, they make the best glazed donuts on Earth. I reached Randy the next morning to have him tell me again about his interactions with Banks.

“Years ago, the Chicago Cubs were having a boat cruise in Chicago, where several former Cub stars and several current players were riding on the boat, and you could buy a ticket and help support the Chicago Boys Club,” Bunkers said. “So Kevin Richards (from Jefferson) and I decided to do it. I was wearing a historic Cubs throw-back jersey, and when I got up to get an autograph from Ernie Banks, he signed my jersey and then he said, ‘So what do you do for a living?’ 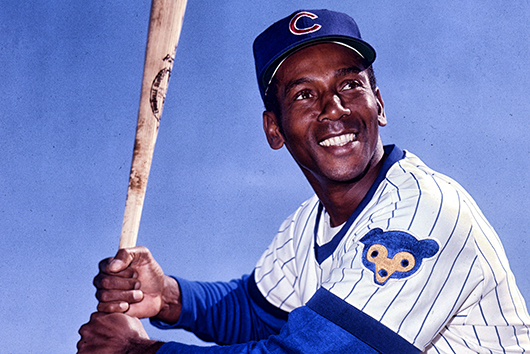 “I told him I have a donut shop in Jefferson IA,” Bunkers continued. “Then he said, ‘Sit down here, I want to talk to you.’ There was a line of people waiting, but I sat down and he said, ‘I’ve wanted to open a donut shop across from Wrigley Field — are you interested in that?’ I said, ‘Oh, Ernie, you’d need a building, and I can’t imagine how much that would cost here.’ His lawyer was standing there, too, and the lawyer said, ‘Ernie already owns three buildings right across the street from the stadium.’

“But that’s as far as I took it. Might have been my ticket out of Jefferson, you know? But I decided not to get into it any deeper.”

A year or so later, Bunkers read that Banks would be in Des Moines at an Iowa Cubs event and would be signing autographs. Another Jefferson pal John Meyer was going to attend, so Bunkers gave Meyer a bag of a dozen Bunkers Dunkers glazed donuts to deliver to Banks.

“A couple days later, the phone rang at the donut shop, Phyllis answered and yelled that it was for me,” Bunkers said. “I yelled back I was busy talking to somebody in the shop, and she said, ‘I think you want to take this call — it’s Ernie Banks!’

“He had just called to thank me and then he said, ‘Those were so good — and if you ever meet my wife and tell her this I’ll swear you are a liar — but the truth is I ate all 12 of those donuts on the drive back to Chicago.’ ”

Bunkers said when news of Banks’ death broke Friday night, Jan. 23, he started getting calls from friends all over everywhere who knew of his ties to the grand ol’ ball player.