JEFFERSON, Iowa, March 6, 2015 — Let’s see, how is it that the groundhog Punxsutawney Phil’s weather predictions work out there in Pennsylvania?  Isn’t it that if Phil comes out of his burrow on Groundhog Day and sees his shadow, there’ll be six more weeks of winter?

In Iowa, weather information is easier to access and more reliable.  We just ask Elwynn Taylor.

Since 1970, he’s been a professor of agronomy and Extension climatologist at Iowa State University.  With his frequent commentaries on radio over the decades, he has become a “rock star” of weather analysis here.  West Central Cooperative, the huge and diverse ag company that operates in this region, has late-winter informational meetings for its producers-customers, and on Tuesday this week, they featured Taylor.  The coop kindly invited the public, too.

I swear Taylor must’ve seen his shadow outside the Elks Club on his way in to speak to the crowd of about 30.

Among his insights for us:

–“The last two winters have been as harsh as winters were in the early 1960s, and we’re in for another 10 to 15 years of harsh winters, if the weather keeps doing what it’s been doing over the decades.”

–“Risk is going to be greater in agriculture in the next 20 years than it’s ever been before.  We’re now into a 25-year period of volatile yields, if the weather keeps doing what it’s been doing.” 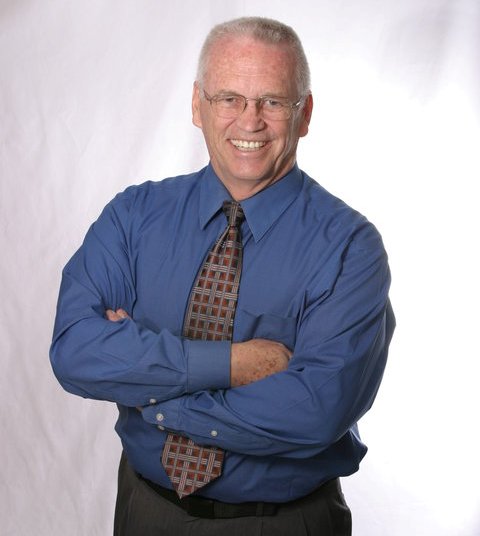 Professor Elwynn Taylor, 73, of Iowa State University gets us through whatever weather is delivered for Iowa. We may not like it any better, but he at least helps us understand it.

I looked around to see if any of our farmers were looking pale, pasty and beleaguered, but then we all do this time of year, don’t we?  And right then Taylor started to come with the better news: This is all going to be quite manageable, particularly if you heed the experts at West Central Cooperative and other ag-friendly resources.

“Know the risk,” Taylor said, almost in a chant. “Risk has numbers.  Know the risk for your specific farm.  Information is readily available, so use it.  Know when to expect suitable degree days, likely precipitation levels, stress days.”

The science of climatology — at least the Elwynn Taylor version of it — seems heavily based on weather patterns over the long haul.  He uses charts, graphs, maps and a good measure of folk wisdom in building good foundations for his predictions and projections.  And he delivers many of those in fun little nuggets.

For example, before he  actually started his speech Tuesday, he asked if there were any questions, and one fellow cut right to the chase: “How much corn are we going to grow this year?”  Taylor didn’t even flinch. “The national trend is 162.3 (bushels per acre), and right now I’ll add four bushels above that.,” he said, holding up four fingers. “Of course, I’ll change my figures later.  Things change so much when the sun gets in the northern hemisphere and starts heating the place up.”

There are those “polar vortexes” that have been assaulting us in the most recent winters.  “Last time we had polar vortexes this strong was 1955,” said Taylor. “Both times we saw droughts in Texas and here, and they were followed then by these very cold winters.”

He said we should be listening closely to what he has to say in his radio appearances after March 15. “We know by March 15 whether we’ll have an El Nino,” he said, “and if we do, we tend to have a good crop in the Midwest.”

I think his “El Ninos” and “La Ninas” have something to do with the “SOI.”  When Taylor used to have an extended weather show once a week on WOI-AM public radio, he would be talking his way through some weather development, and he’d drop that term “SOI,” and then immediately pause.  That’s because Doug Cooper, then the weather show’s host and now part of WHO radio’s midday farm show, would break-in and offer in a low, explanatory tone, “That’s the ‘Southern Oscillation Index’.”  I always loved that even though I was clueless what it really meant, and still am.

Taylor was terrific Tuesday in talking about energy, fuel, excessive carbon in the atmosphere and how agriculture relates to all that.

“The problem is that we all like what energy can do, and we’re energy dependent,” he said. “My favorite discussion about that happened one time years ago when a bunch of us were gathered at some convention and we were having a seminar over lunch.  Finally, one of the scientists held up his sandwich in the palm of his hand and said, ‘The problem is my sandwich.’  We all stopped, looked at him and wondered what he meant.  He went to explain that it looked to be a fine sandwich, just the kind he liked, ‘but this sandwich had to travel 1,400 miles to get to me.’  He explained the meat had come from Iowa, the lettuce from California, the tomato from Texas, and the mayonnaise from some place else.  As the world becomes more  affluent, we use more energy.”

Taylor went on to talk about the wisdom, practicality and efficiency of growing our food closer to home.

Then he noted how affluence brings more demand for fuel to operate production equipment, trucks, cars and other vehicles. And those all put more carbon in the air.

“Agriculture has been part of the problem, and agriculture can be all of the solution,” he said.  “Agriculture can solve the climate change problem by providing a fuel that does not change the carbon in the air.  Right now we’re using 20 percent of the corn in Iowa to produce ethanol.  If we’re using biofuel, carbon dioxide doesn’t go up at all in the atmosphere.  It would take one third of the row crop land of this Earth to produce the energy to fuel our machines in a way that would agree with nature.  Interestingly, that’s what we were doing when we were powered by horses.  It took a third of our crop land to grow their ‘fuel’ — the food for the horses.”

Back to the opening question, Taylor finished his presentation talking about likely corn yields and prices this year compared to costs of producing it.

Oh, one more priceless nugget from Taylor.  I don’t know how he got to this point, but it fell between his prediction of the chance of flooding on the Missouri River this year (“less than 25 percent”) and his insights on the polar vortexes of 1955 and right now.  Suddenly I heard him saying, “And do you realize that you can’t throw a baseball in a straight line anywhere but on the equator? Everywhere else the ball is going to curve because the Earth is turning.  If you were standing right here in Jefferson and could throw it hard enough, the ball would in fact go around in a circle but it would take a long time.”

Put all of the above together, and you begin to understand why when Elwynn Taylor is speaking about the weather, a whole lot of us in Iowa are listening — spellbound.