NASHVILLE, Tenn., Nov. 25, 2014 — I was in fast company one weekend this fall here at my alma mater, Vanderbilt University.  I was inducted into the Hall of Fame that has been established by Vanderbilt Student Media to take note of professional work by alumni in the ever-changing field of mass communications. I was inducted along with Dave Sheinin, a sports feature writer for the Washington Post, from the VU Class of 1991; National Public Radio senior editor Bridget Kelley (’88); Chicago Public Media chief operating officer Alison Scholly (’90), and one of Facebook’s first engineers, now a very successful entrepreneur, Jeff Rothschild (’77).

My favorite part?  My engraved glass trophy was presented to me by Tyler Bishop, who is now the editor-in-chief of the Vanderbilt Hustler student newspaper, the same position I held well-back in the last century.

I’m going to remember that whole Hall of Fame day of Friday, Oct. 10, as one of the best in my life.

There were 169 members of my Class of  ’69 and many of our spouses back on campus for our 45-year reunion.  Before the actual Hall of Fame event, my best friend since those college years, Douglas T. Bates III, then and now of Centerville, Tenn., surprised me with a reception at which our class’ folk hero, former Vandy baseball coach Larry “Smokie” Schmittou, showed up.  The legendary Schmittou and I were assigned to sit in front of our friends and lead a conversation about how we rowdy students in the long ago helped him launch a baseball program that became one of the best in the South.  It was the foundation on which Vanderbilt’s 2014 national championship team was built. Then following the Hall of Fame ceremony, there was another reception.  And then we went on to our class reunion dinner, which kept us out well past 10 p.m., so you know it was a big time for us old folks.  I’ll tell you more about some of that fun in another column soon, but now let’s talk Vanderbilt journalism. 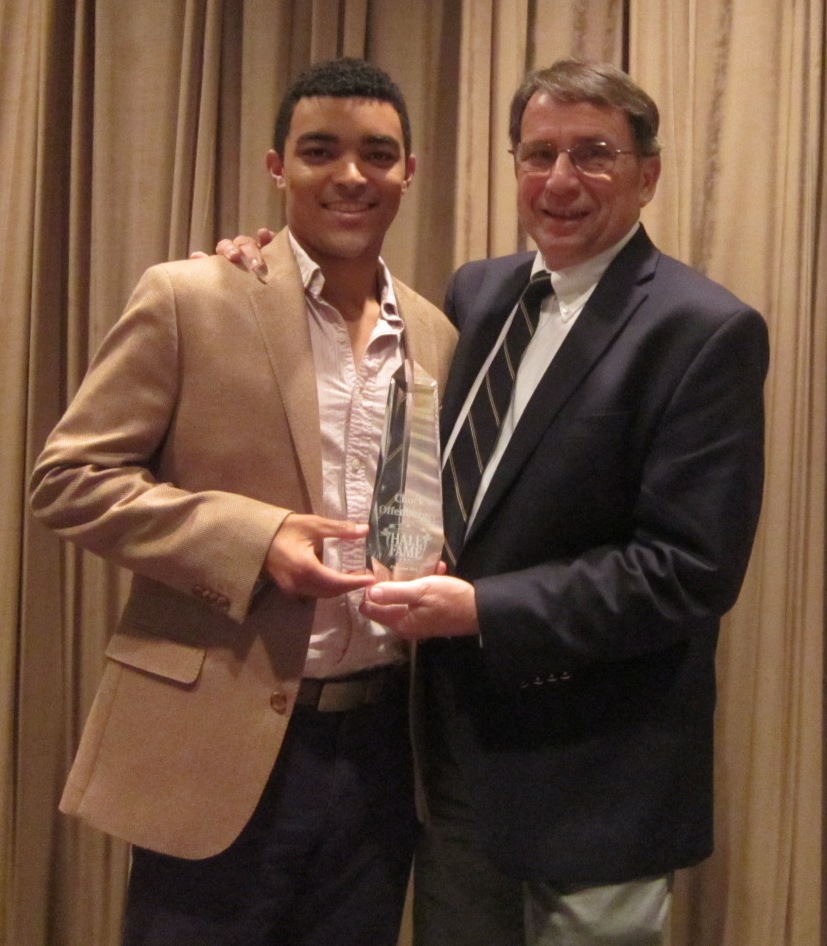 During the Hall of Fame ceremony, I’m afraid the stories were just rolling about how I’d been so dedicated to the newspaper in the first semester of my senior year at Vanderbilt that I quit going to most classes.  And I was so broke that I had no dorm room, but instead made my home in my editor’s office on the third floor of Alumni Hall.  There I kept my clothes in a four-drawer file cabinet and slept on the tattered carpet after my cheap canvas cot collapsed. It was a dumb devotion, a ridiculous way to live, and I wound up having to give up my editorship at the end of the first semester after I nearly flunked out.  That’s when Bates and I decided to become sportswriters, covering the baseball team like that sport had never been covered before on campus — and, as I said, that turned out well.  I also started attending classes again, actually studying, and by also going to summer school, managed to earn my diploma.

So after those stories had just been told to the Hall of Fame crowd, there I was looking face to face with today’s Vanderbilt newspaper editor, who surely had to be at least a little skeptical of me.

“Tyler Bishop,” I said to him later, when we had a good long phone chat, “I’m afraid my best advice to you, old editor to young editor, must be this: ‘Do as I say, not as I did.’  And let’s start with this: Go to class.  Always go to class.”

He chuckled, then said, “You know, I did skip a class the other day — and I actually thought about you when I did.”

He can probably get away with doing that occasionally, as smart and savvy as he seemed to me.  Bishop is a 21-year-old senior, originally from Houston, but who went to high school in Morristown in eastern Tennessee after his family moved there.  His major is in political science and communication studies, with a minor in corporate strategies.  He loves politics, is “pretty solidly with the Democratic Party,” and was part of a Vanderbilt interim-term class that spent nearly a week in Iowa in early 2012, right before the Iowa Precinct Caucuses, experiencing the presidential campaigns.

“I’m always interested in government, and how people perceive it — whether they love it or hate it,” Bishop told me.  “Newspapers and other media are so important for keeping people informed, although maybe sometimes the media are mis-informing them.  I’m interested in looking at the way media serves democracy, and all the different dynamics of that.”

So, what does he think the future holds for him?

“I’m seeing two possibilities,” he said. “I’m definitely interested in being in journalism in some way.  And since I’m very interested in politics, I’d also like to work in the press operation of a presidential campaign.  Longer term, I may want to go to law school eventually, study Constitutional law and work in media law.  Maybe I could become counsel for a media company.”

Can he see himself as a political candidate?  “I don’t think so,” he said.  “I’m a lot more interested in the media side of politics.”

We went on in our discussion to cover a wide range of topics.  What I really wanted to learn from him was how student media is doing at Vanderbilt.  We all know that it’s a rapidly changing time in the communications field, and that many newspapers are struggling.  What about at Vandy?

I should explain for those of you unfamiliar with our university, that it is the only private school in the Southeastern Conference, where our Commodores have to compete with the giant athletic programs at state universities from the likes of Alabama, Florida, Mississippi, South Carolina and, yes, Tennessee.  Our enrollment is about 7,000 in undergraduate programs and 6,000 in graduate studies, including professional schools in medicine, law, divinity and other specialties.  Our students come from all 50 states and about 90 other nations.  We do have an engineering program for undergraduates, but the emphasis is in the liberal arts.  Academics are strong, despite my own checkered history. 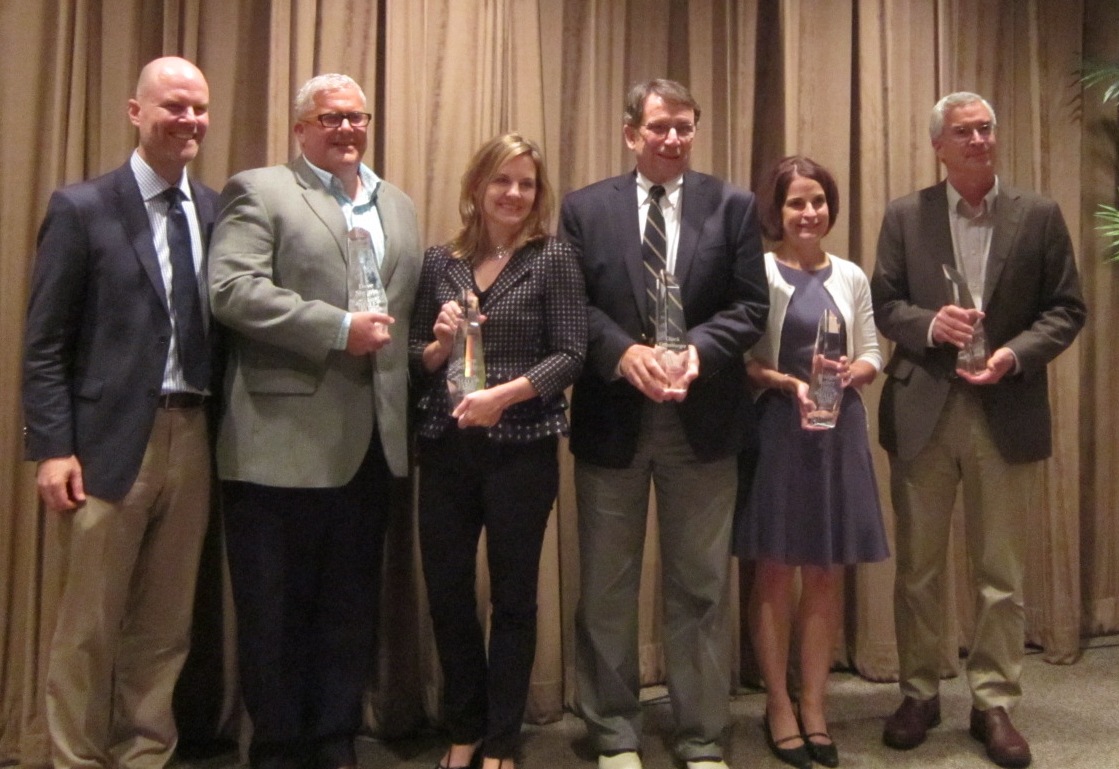 Here are this fall’s inductees into the Vanderbilt University Student Media Hall of Fame.  Left to right are Andrew Maraniss, a Nashville writer who served as master of ceremonies; Dave Sheinin of the Washington Post; Alison Scholly of Chicago Public Media; Chuck Offenburger formerly of the Des Moines Register; Bridget Kelley of National Public Radio, and Jeff Rothschild of Facebook.

As far as I know, Vanderbilt has never had a journalism school or any classes in other media.  It offers no majors or degrees in the field.  The emphasis has been on prospective journalists receiving broad, liberal arts educations, and then have internships with professional media in Nashville and elsewhere.  It seems to work, as our school has produced some very distinguished media professionals — the legendary early sportswriter Grantland Rice; Atlanta publisher & columnist Ralph McGill; network TV anchorman David Brinkley; essayist & author Roy Blount Jr.; ESPN analysts & writers Skip Bayless and Buster Olney; New York Times baseball correspondent Tyler Kepner; Sports Illustrated’s Lee Jenkins; Cleveland Plain Dealer sports columnist Bill Livingston, and the Today Show’s Willie Geist, among many others.

When most of those on that list were students, Vandy’s media included the Hustler newspaper coming out twice a week (although I tried to make it a daily and failed), the campus radio station WRVU, a literary magazine and the yearbook.

“Well, you hear about print dying everywhere, but the Hustler still does have a big presence on this campus,” said Bishop.  “And there are now two radio stations, as well as VTV (Vanderbilt Television), the Vanderbilt Political Review, a literary magazine, and then for online, we put it all together 24/7 on VanderbiltHustler.com.  During my year as editor, I’m trying to explore ways to make all this more and more multi-media.  We do have a real following.  Our analytics on the website tell us that there are upwards of 100,000 unique visits per month.”

They’re getting that strong following because they do a good job of covering life at Vanderbilt, or so it seems to me as I browse from afar.  They have serious news, examination of public issues and lively opinion columns, as well as good coverage of sports, entertainment, features and the social scene.  And they get outstanding photography and video work.

How many students are involved?

I checked with some of the other Hustler staff members in my student era, and our recollection is that there may have been about 40 of us working on the newspaper back then.  Add the students who were doing radio back then, the literary magazine and yearbook, and the total of those involved in student media might have been 75.

I was astonished hearing those figures.  And they jibe with the estimates that the full-time student media advisors gave me during my visit.  (I can’t remember that we had any professionals advising us back in the ’60s, although we were reviewed by a “Publications Board” made up of a few professors, administrators and other students.)

The only conclusion you can make from that is that there’s more student media than ever at Vanderbilt.

And that makes sense because, as editor Bishop reminded me, “the campus community here is sort of a microcosm of what’s happening in our society.”  Don’t all of us have access to more media than ever before?

Because of that, my departing message to Vanderbilt media students was one of real optimism about having careers in the field.

“Journalism is very different from when I got out of here,” I told them. “But the reality is there’s more media today than there’s ever been.  And if you like media, how can that be bad?  What it really means is there are more opportunities than ever before for people like us.  Get out there, figure out how to make it work for yourself, and have fun.”

I also told them that Vanderbilt is giving them a secret weapon, like it did me.  They’re getting an excellent education — even I did — and that will give them the curiosity and confidence that will let them successfully compete on stories with the best journalists in the world.

And my farewell to Tyler Bishop, aspiring political journalist: “See you around Iowa.”  He grinned and said, “I’ll probably be there.”