Today we start a new feature here on Offenburger.com.  In this “A BLAST FROM THE PAST,” we will regularly go back to earlier stages of our careers and pull up stories we’ve written on a wide variety of topics for many different publications.  We begin with this story that Chuck Offenburger wrote this past May 3 for an e-newsletter that KMA radio in his hometown of Shenandoah was publishing then.  In it, he recounts the conversation that he and Carla Offenburger had over dinner celebrating their 22nd wedding anniversary, talking about all they’ve done during their lives together.

When you’ve been  through illnesses like my wife Carla Offenburger and I have with our cancer the past five years – and if you’re lucky enough to experience recovery and some new life like we have – it does tend to make you think about where you’ve been and what you’ve done.  You appreciate it in a whole new way.

Maybe that’s what led to our discussion over dinner last month on our 22nd wedding anniversary.  Carla suggested we try to identify the “top 10 things we’ve done in our years together.”  It took us only a few minutes to list them, but we’ve been reflecting on them ever since.  As you’re going to see, we covered a lot of ground, so to speak.

“Just going back over them,” Carla said, “the first thought that comes to my mind is, ‘No wonder I’m so tired!'”

But then I remind her of what I told her when we realized back in 1990 that we were in love and would hopefully be spending the rest of our lives together: “It’ll never be boring.”

So here’s our list, with our recommendation that you all do similar listings from your own long-term relationships:

Our 1994 invasion of Normandy.  In the first seven years of our marriage, I was still a columnist for the Des Moines Register, and that gave us some unusual opportunities.  One of those was accompanying a group of World War II veterans from all over Iowa who returned to Normandy in northern France for the 50th anniversary of D-Day.  That invasion led to the Allies’ victory in World War II and assured so many of us of the good lives in freedom that we’ve enjoyed.  And visiting there, under the circumstances, gave Carla and me some real historical perspective.

The 1995 “Iowa 150 Bike Ride/A Sesquicentennial Expedition.”  We combined our love of bicycle touring with our love of Iowa, and we led a group of 308 people on a 100-day, 5,048-mile ride across America.  All the way across, we hosted “Iowa parties,” with a 48-foot-long display trailer showcasing the tourism amenities in the state.  We were promoting the 1996 Iowa Sesquicentennial celebration and inviting everyone we met to visit Iowa during the 150th anniversary of statehood. 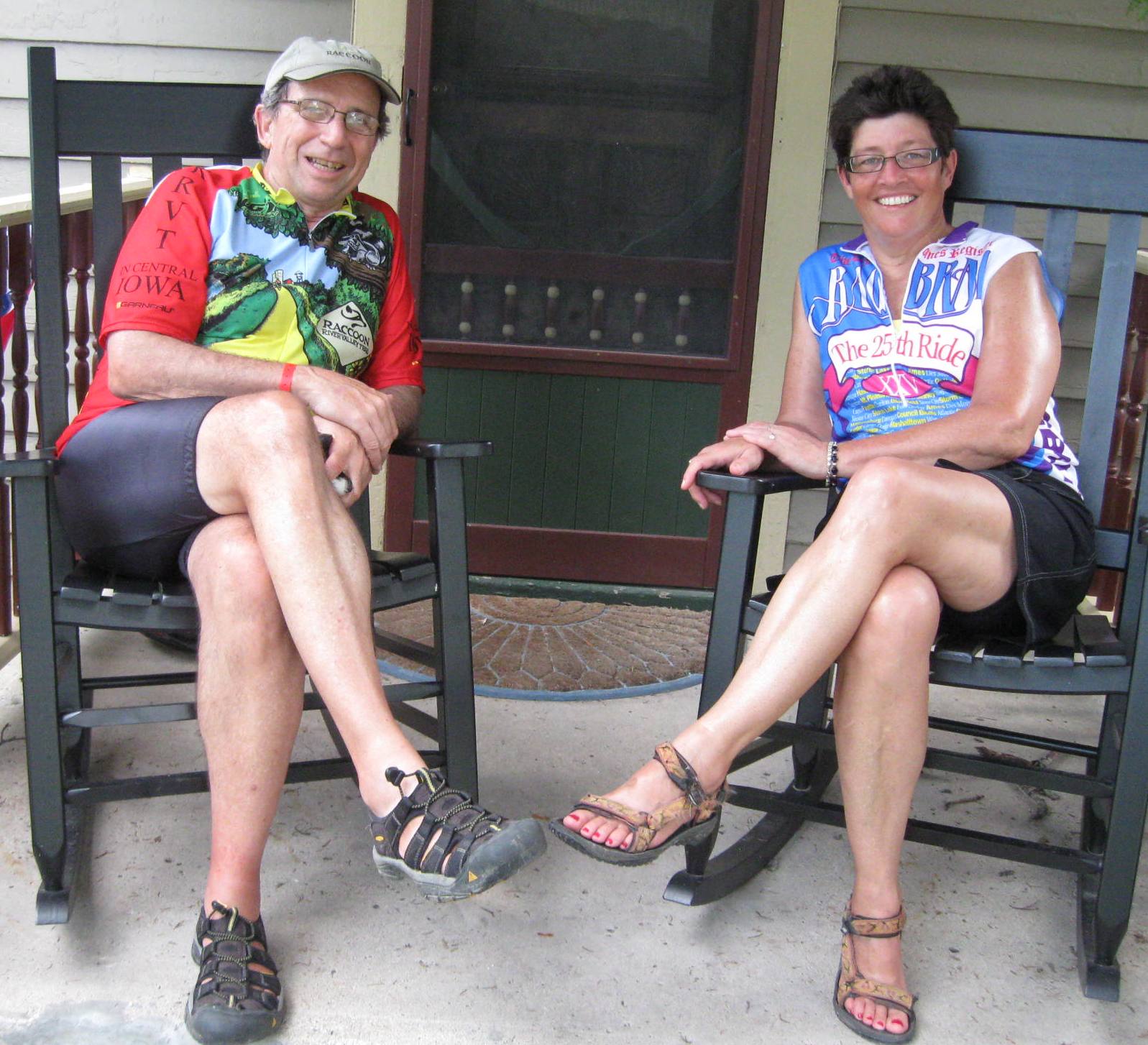 The Offenburgers on RAGBRAI in 2011 in Slater, Iowa.  (Photo by Kyle Munson, Des Moines Register)

In 1995, we also gave up TV.  Because we were on our bikes that whole summer, and mostly away from television, we really broke our addiction to it, the addiction that 99.9 percent of Americans all have.  We were not anti-TV, by any means.  But we got used to being without it that summer, and then realized how much more we seemed to be enjoying extra time in our lives.  We just never went back to being regular viewers.  We’ve invited ourselves to friends’ houses, or watched in public facilities, when there have been big ball games or major news events.  The one old TV we owned was essentially worthless, once the conversion to high-definition took over.  We gave it away – to a couple who wanted to have a TV in their motor home to watch recorded movies.  We don’t even own one now.  Most of you can’t imagine how positively that affects our lives.

Back to campus in 1998-’99.  Carla and I have both always loved colleges and universities.  I’ve often called myself “the eternal sophomore.”  While she was studying for her master’s degree in English at Iowa State University, she taught at her undergrad alma mater, Simpson College.  I realized anew how much I liked college life, decided I’d done everything I had really wanted to do at the Des Moines Register and at the right moment, quit.  That freed us up in the next years to teach at Simpson, Loras College in Dubuque, Coe College in Cedar Rapids, at the Des Moines campus of Upper Iowa University and full-time for five years at Buena Vista University in Storm Lake.  There’s nothing quite as reinvigorating as spending a lot of time with college students.

Starting our website Offenburger.com.  In March 2001, after about five years’ of urging from our tech-savvy son Andrew Offenburger, we started our own Internet news and opinion site.  It’s been our “media home” ever since, and a place where we can file and store all that we are writing and doing for other media.  And operating it for 13 years has really helped us understand the impact and potential of the Internet on all our lives.

Traveling with “Offenburger.com Tours.”  It’s been a while since we’ve done one of these, but we’ve led bicycle and bus tours, generally around Iowa, introducing others to a lot of the special people and places we’ve come to know and love around the state.  Our motto about our tours: “They’re not trips, they’re adventures!”  And they have been.  We’ve backed off on doing these, simply because they’re a lot of work, but we might do a few in the future.

Since 2004, the good life on the farm.  Carla loves gardening and has always wanted more room for gardens.  We still love bicycling.  We realized we had lived in Iowa’s largest city and a nice small town.  And, as my old Tennessee friend Douglas T. Bates III said, “Well, I guess if you are an Iowan, at some point in your life you really ought to live on a farm.”  So we bought an acreage in 2003, had the cenutury-old farmhouse renovated and in June, 2004, moved to just outside Cooper (pop. 30), right along the Raccoon River Valley Trail.  We tell people it’s like living in the middle of a landscape painting, one that changes a little bit every day.

Going international in our family and lives.  Iowa native and opera great Simon Estes is a friend of ours.  We were involved with him in the mid 1990s when he performed in South Africa for the first time, and then decided he wanted to bring a high school choir from that country to Iowa for a year of education and life here.  We hosted one of the girls, Bolekwa Sifo, in 1998-’99.  Andrew Offenburger, then a student at Buena Vista U, went to South Africa, helping Estes open a high school there.  By 2005, Andrew had fallen in love with an Argentinian, Maria Lizardia, and that led to all of us traveling to Corrientes in the northern part of that country for their wedding.

Back to South Africa in 2006-’07.  Andrew, doing graduate studies at Yale University, and Maria spent most of a year in Cape Town while he was earning a master’s in South African studies.  That led us to spend New Year’s there with them, and a reunion with Bolekwa Sifo, who now has her own family in Khayalitscha Township.  Knowing and loving people in other countries has helped us understand the complexities and wonders of the world; to embrace other cultures and learn from them, and to welcome newcomers to the nation of immigrants that we are in the U.S.

Who would list “fighting cancer” as a highlight of their lives?  Well, us.  We Offenburgers, of course, are a little peculiar, but we have found some good in the awful disease we’ve battled into remission after our diagnoses in 2009 (me) and 2010 (Carla).  Helping each other through “tag-team cancer,” as we’ve called it, has intensified our love for each other.  More important, it has deepened our love and respect for life itself.

You can reach columnist Chuck Offenburger at chuck@Offenburger.com.

One thought on “A BLAST FROM THE PAST: They realize how much they’ve learned in 22 years of marriage they’ve shared”