JEFFERSON, Iowa, Sept. 29, 2014 — Jim Mowrer, the former infantry sergeant who served nearly two years in the war in Iraq, seems to have pretty well figured out Congressman Steve King, whom Mowrer is running against in Iowa’s fourth district race for the U.S. House of Representatives.  In a campaign appearance early last week, King, a 65-year-old Republican who has already served 12 years in Congress, started talking again about how he owns an AR-15 semi-automatic rifle and how he’s been “thinking it might be a good idea to order a little ammo in.”  So later in the week, I had an opportunity to ask Mowrer, a 28-year-old Democrat, what he makes of that. “Congressman King is an arm-chair general,” Mowrer said with a wince. “He never served (in the military), but he wants to try to project this tough guy bravado.”

Mowrer, who lives in Boone, said the reality is that King, as a House member, “has no record on defense or foreign policy.”  He said if King, who lives outside Kiron, wants to talk big and tough, “that’s his prerogative” and notes that King always seems to be “very loud in his opinions.  He evidently feels the need to speak to extremes.”

As for Mowrer himself, “I don’t feel a need to talk about the rifles I own,” he said, “but I’ve slept with an M-16 in a war zone.  I understand guns, I’m in favor of the Second Amendment, I’m strong on defense and I’m proud of my military service.”

And right then, I started liking this race a whole lot more than I had so far. 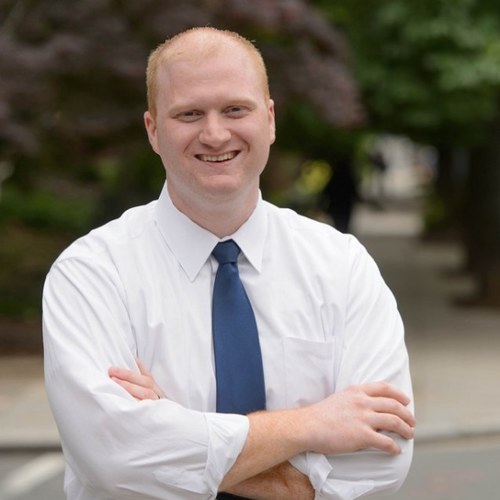 Jim Mowrer says he must “keep getting the message out there of who I am, what I stand for and how that contrasts with Congressman King.”

HOW DOES KING KEEP WINNING?  If you don’t remember, I’ve never been a fan of King’s politics, which have been noisy, sometimes radical, often disrespectful and frequently hateful.  And I’ve never voted for him.  That’s despite the fact that I was a Republican during 10 of his 12 years in the House.

His mean-spirited public outbursts have made him radioactive in Congress, to the point that nobody really wants to work with him, and he has become the most ineffective Congressman from Iowa — especially among those who’ve served for more than one or two terms — that I can ever recall.  I am mystified how the good people of his districts in Iowa have kept re-electing him, except that so many seem to find some perverse entertainment value, or some psychological satisfaction, in having their representative in Washington, D.C., be a mouthy leader of the “culture war” he proclaims.  He may well deliver messages that they’d like to deliver themselves if they had the time and access.  Does it not matter to them that he has done so little for them in Congress?

But give King some credit, too.  When he’s not being hateful and denigrating, he can be charming, engaging and even funny.  I wrote two years ago that he may have missed a real opportunity.  Once he had established his national, nearly global, reputation for quick-witted, edgy commentary, he should have given up public office to become a political commentator — maybe have his own national talk show — where he would undoubtedly command a vast audience and even have some real influence.

So anyway, three years ago I publicly endorsed and later worked hard for my good friend Christie Vilsack, the former First Lady of Iowa  and Democrat who ran against King in 2012.  I’d been a member of the Greene County Republican Party’s central committee, so my public support of Vilsack was causing a fuss.  I resigned from the GOP committee right before they were going to vote me off it, and changed my voter registration to “no party.”

Truth is, two years later I’m still pouting a little about our eight-point loss to King in that election.  When Jim Mowrer called me up several months ago to introduce himself, I wished him good luck but told him that I was still feeling too beat up to get involved for him.

THE INCUMBENT MUST BE CHALLENGED.  Last week was a waker-upper for me.

On Monday night, Sept. 22, a Republican who is running for State Senate, Brian Best, of Glidden, had a fundraiser for his campaign there in his town.  King was the headliner and, according to the Carroll Daily Times Herald’s story the next day, “stayed for about three hours at the Glidden event, and talked at great length individually with many local Republicans…”  Candidate Best, Congressman King and other Republican leaders covered many issues during their remarks, including guns.  That came up primarily because Best’s opponent, incumbent State Senator Dan Muhlbauer, a Democrat from Manilla,  had called for some gun control measures right after the horrific school shootings in Newtown, Conn., in December of 2012.    He clarified that later, and the Carroll newspaper in its story from the Glidden fundraiser, reported that clarification again: “Muhlbauer, a cattleman-farmer and gun owner, later said he reacted too emotionally as a father and grandfather after the Connecticut school murders, and that he strongly supports gun rights, both as a legislator and as someone who uses guns.”

King told the crowd last week that he knows Muhlbauer softened his first gun control statement, “but how did it ever get said in the first place?  What was that that was going on up there that caused him to make those remarks?”  He went on to say that Iowans are fortunate to have stronger gun rights than many other states, according to the Carroll paper’s story.

“I was perusing around on the Internet last night thinking it might be a good idea to order a little ammo in for my AR-15,” King told the Glidden crowd. “I can find it down there at around 26 cents a round.”  Later he added that if Muhlbauer’s initial call for gun control measures had been adopted, “I don’t think he was going to let me buy a thousand rounds of AR-15 ammo.”

King was also highly critical of President Barack Obama’s recent order to have U.S. troops lead a coalition of nations in an aerial bombardment of the terrorist ISIS group in Iraq and Syria.  King said the president should have acted sooner.  The Carroll paper quoted King concluding, “The biggest question we have is how do we win a war with a reluctant, feckless president.”

Now, I’m no political prude, but I am traditional enough that when somebody calls the president of the U.S. “feckless,” it bothers me.  Especially when the person saying that is so feckless himself.

That’s why on Friday, Sept. 26, I asked King’s 2014 opponent Jim Mowrer what he thinks about such bluster when he made a noon hour stop in our county seat town of Jefferson.  When Mowrer began his answer by calling King “an arm-chair general,” I knew I was hearing a line that a whole lot of military veterans must feel when King goes into one of his tirades.

SIGHTING-IN ON TYRANTS (BUT COYOTES FIRST).  Ah yes, Congressman King and his AR-15 rifle.  During at least two of the seven debates he had with Christie Vilsack in the 2012 campaign, we heard about the AR-15.  In fact, he said back then the King family had several high-powered rifles, which they used for “coyote hunting” and target shooting.

All the gun violence we have experienced in America has not softened most Republicans’ loud, persistent calls for unrestrained gun rights.

Indeed, the Republican Party of Iowa platform, adopted at the state party convention last summer, has this plank: “We also demand the elimination of ‘gun free zones’.”  Like at schools, hospitals, courthouses and city halls.

On another issue, the GOP platform says “we support term limits for federal and state elected officials,” but it no longer lists the number of terms or years of service should be allowed.  It used to stipulate that for state or federal elected offices, the limits should be two terms or 10 years, although we can all name notable Republican office holders who trampled all over that.

Nevertheless Steve King, who served six years in the Iowa Senate before his dirty dozen in Congress, is beyond the limit that the Republican platform has ever envisioned.  He has done enough.

A REAL CONTRAST, FOR SURE.  Meanwhile, Mowrer has a compelling story.

As he told the crowd of about 25 at Greene Bean Coffee here, he was 7 years old and living on a farm near Ogden when his father, David, was killed in a farm accident.  His mother Susan moved Jim and his suister Ruth Ann to Boone where, he said, they wouldn’t have survived without survivor benefits from his father’s Social Security benefits.  He said the reason he is a Democrat is because of the party’s early advocacy and continuing protection of Social Security.  “I believe that when we fall down, we’re better off to help each other get up,” he said.

After the attacks of Sept. 11, 2001, Mowrer — still in high school — wanted to join the military.  He joined the Iowa National Guard’s 133rd Infantry as soon as he’d graduated.  In 2005, his unit was activated and deployed for service in Iraq — for 23 months.   During his military service, and using his military benefits, he earned a bachelor’s degree in political science from the American Military University, and later a master’s degree in public policy from George Mason University.  Congressman King has no college degree, but he has often said he regrets never completing his studies at Northwest Missouri State University, and that he has insisted that everybody else in his own family earn their college degrees.

Mowrer went back to Iraq in 2009 as a civilian advisor to U.S. military commanders there.  Then in 2010 he worked in the Pentagon in the Army’s Office of Business Transformation, streamlining the service’s business practices.  He also became an Army liaison to the Council of Governors, helping coordinate the operation of military installations in their states.

He is married to his high school sweetheart, Chelsey, and they have sons Carter, 4, and Jack, 2.  They are Presbyterian.

He said his decision to run for office began taking shape when he was in the military.  “I served with a lot of other young Iowans, and young Americans, and we talked about how after we were done in the service, we needed to stay involved and try to make a difference,” he told the crowd here.  “When I was working in the Pentagon, I kind of had a front row seat to see how broken the Congress is.  I knew that my own representative, Congressman King, is part of the problem rather than the solution, and that’s why I’m in the race now.  He’s been in Congress 12 years.  He’s never passed any legislation.  He’s never brought anything home for Iowa.”

Mowrer has done well in fundraising, and that — along with his constant travel in the district — is helping him “to keep getting the message out there of who I am, what I stand for and how that contrasts with Congressman King.”

Besides his background, I like the generational shift Jim Mowrer represents.  I hope fourth district voters will rally behind him.  He is an impressive young American.