JEFFERSON, Iowa, Jan. 10, 2017 — Nationally-known political commentator David Yepsen, who later this month becomes the new host of the weekly “Iowa Press” show on Iowa Public Television, is returning to his hometown of Jefferson on Sunday, Jan. 22, to reflect on his journalism career in a special program for the Greene County Historical Society. He will also talk about current political events, including the start of the Donald Trump presidency, and will answer questions from the audience.

The program was originally scheduled for Sunday, Jan. 15, but threatening weather in the forecast made it prudent to postpone for a week — again, to Sunday, Jan. 22.

The 2 p.m. program at the Greene County Historical Museum, 219 E. Lincoln Way, is free and open to the public. 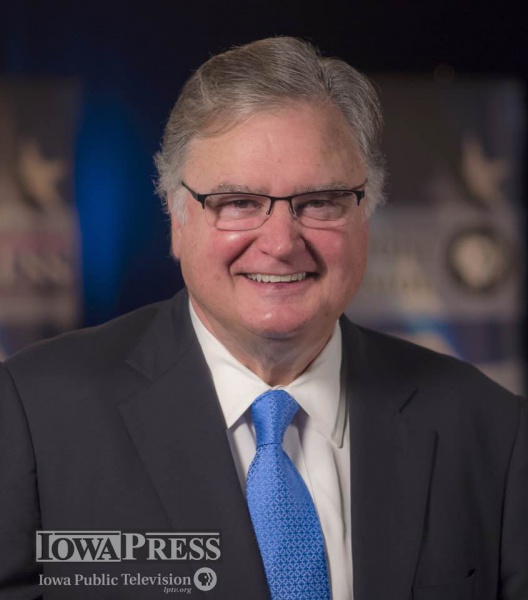 Yepsen, 66, is a 1968 graduate of Jefferson High School.  After graduating in 1972 from the University of Iowa, he had a 34-year career covering politics and government for the Des Moines Register.  In the late 1970s, he began appearing as a panelist on “Iowa Press,” asking questions of the government leaders, political candidates and other newsmakers who were the featured guests.

In 2008, he left the Register to become director of the Paul Simon Public Policy Institute at Southern Illinois University, although he kept his permanent home in Des Moines. He retired from the Simon Institute this past November, not certain what he wanted to do next.  That’s when Dean Borg, the host since the 1971 start of “Iowa Press,” announced he was retiring from the show but continuing to do special projects for IPTV.  The network immediately sought out Yepsen to succeed his old friend Borg, and his first show as host is Jan. 20.

“I’m really looking forward to coming back to Jefferson and talk about what I’ve been fortunate to do in my career over the years,” Yepsen said. “My interest in politics and government goes all the way back to grade school and junior high, right there. I was never any good at football or music, but I did enjoy history and government.  I credit some teachers I had then and in high school for encouraging me in those interests.”

“Those are the people who not only were teaching me, but got me involved in speech and in student council,” Yepsen said.  “I really got interested, and thought I might eventually do something in politics, even though no one in the Yepsen family had ever done that.”

The summer after his junior year of high school, he was selected for the American Legion’s Hawkeye Boys State program at Camp Dodge – where students learn about how government functions – and he was elected governor.  Back in Jefferson for his senior year, he was elected student body president.

At the University of Iowa, Yepsen served three years in the student senate, and of course was thinking about what he wanted to do after college to start his career.  “I’d gotten to know some of the reporters and editors from the student newspaper, the Daily Iowan, who were covering student government,” he said. “I decided you might be able to have more impact on public issues by writing about them as passing resolutions about them.  And I realized that there might be journalism jobs later.”

Friends at the student newspaper gave him quick instruction in reporting and he joined the staff his senior year, 1971-’72.   He also became a campus stringer for the Des Moines Register. When student activism at the university spilled into the streets, Yepsen helped cover the stories and wound up with by-lines in the Register.

After graduation, he went to military basic training and then returned for service in the Iowa Army National Guard – and to look for a full-time job.

With his interest in politics, Yepsen had volunteered in the 1968 gubernatorial campaign of Democrat Paul Franzenburg, who was defeated by Republican Robert D. Ray.  In 1972, Franzenburg challenged Ray again, and Yepsen was hired to work on the campaign – and Ray won again.

Then a U of I journalism instructor connected Yepsen to the Davenport Times-Democrat when that newspaper was looking for a police reporter. In 1974, he became a police reporter for the Des Moines Tribune, and by 1975 moved to the Register to cover Polk County courts. Within a year, he was assigned to cover the Iowa legislature.

From the 1990s until 2008, Yepsen was chief political reporter and then political columnist for the Register, at a time when the Iowa Presidential Caucuses were mushrooming in national importance.  As presidential candidates and national reporters flocked to Iowa, all wanted to get Yepsen’s time and attention.  They began referring to that as “climbing Mount Yepsen.”

After he had covered several presidential campaign cycles and elections, Yepsen began to think about what he might want to do next.  In 2009, Mike Lawrence was retiring as director of the Simon Institute at Southern Illinois U.  Lawrence had been Yepsen’s managing editor at the Davenport Times-Democrat 35 years earlier, and they had always stayed in touch.  Lawrence recommended his old friend to SIU officials, and they hired him.

Yepsen had always been an admirer of the institute’s namesake, former U.S. Senator Paul Simon, of Illinois.  “I’d covered his campaign when he was in Iowa running for president in 1987, and I liked him,” Yepsen said. “He’d been a newspaper reporter earlier in his life, and he was always a candidate who seemed to enjoy visiting with the press, so we got along well.”

Plus, Yepsen had a couple of experiences teaching during his years at the Register, and he found he really enjoyed that.  In 1985, when he was earning his master’s degree in public administration at Drake University in Des Moines, he taught a class, “How to Deal with Media.” In 1989, he was a fellow at Harvard University’s Shorenstein Center on Media, Politics and Public Policy, and he returned to Harvard in early 2008 to teach in the Institute of Politics.

During his time at SIU, Yepsen taught, coordinated public policy programs at the institute, did presentations around Illinois, and continued his political analysis and commentary when national media sought his insights.

As retirement came on, “I intended to write a book, and I’m still in the process of sorting that out,” he said. “I’ve thought it could be about Iowa’s role in presidential politics, or a political history of the state, or the forces that have shaped Iowa politics & government.  Stuff like that is what’s floating around in my mind.  But then I sometimes also think that, after 40 years in politics, maybe I ought to do other things, you know?”

For now, though, being host of “Iowa Press” seems a good fit to him.

Yepsen and his wife Dr. Mary Stuart continue to live in Des Moines.  She practiced medicine early in her career, then served for 25 years as medical director at the Principal Financial Group in Des Moines, and now has retired.  Their daughter Elizabeth Yepsen, 31, is a senior budget analyst for Google Maps in Zurich, Switzerland.

David is the son of the late Arlon and Marj Yepsen, who lived their entire adult lives in Jefferson before their deaths in 2014 and 2010, respectively.  His brother Tom is a retired school principal in Jefferson, sister Mary is a special education teacher in the Southeast Polk schools outside Des Moines, and sister Sara is a nurse in Colorado Springs.

At the historical society’s program on Sunday, Yepsen will speak and then take questions from the audience.  Refreshments will be available free.