She gave the incurable adenoid cystic carcinoma a real challenge, one that hopefully will help ACC patients and medical personnel in the future.

Carla was a native of Des Moines, born on Jan. 14, 1959, to Carl W. and Wilma Sue Burt. She graduated from Des Moines Lincoln High School, in business from Simpson College, and earned a master’s degree in literature from Iowa State University.  She taught for 10 years at Iowa State, Simpson, Buena Vista University and Upper Iowa University.  She was a tough, effective mentor for dozens of her students and other young people.  But her favorite teaching experience was probably showing her three granddaughters how to prepare fancy meals and bake excellent pies. 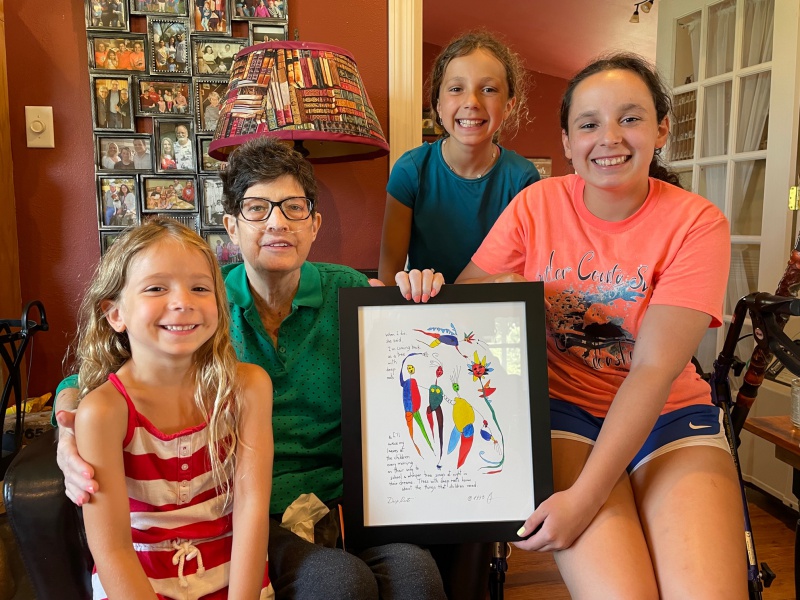 Carla Offenburger with granddaughters (from the left) Audrey, Casey and Lindsay Offenburger, of Oxford, Ohio. They’re holding a special poem and drawing about saying goodbye, by Iowa artist Brian Andreas. It was Carla’s farewell gift to the girls.

She was blessed with a talent for organizing and “people skills” that enabled her to get big things done.

Carla directed the “Iowa 150 Bike Ride/A Sesquicentennial Expedition” by 308 people across America in 1995; a “blitz build” of a Habitat for Humanity house in Des Moines by members of her Plymouth Congregational United Church of Christ, and a concert tour of Iowa by opera great Simon Estes.  She organized several large business & development events, a couple of large quilt shows, and she was a key organizer of five unforgettable “Cooper Proms” for adults, who packed the old gym in her tiny community for banquets and dancing to a big band.

An avid bicyclist and advocate for recreational trails, she served as president of the Raccoon River Valley Trail Association. And she was twice elected as clerk of the Franklin Township Board of Trustees.  Township clerks generally oversee the rural cemeteries in Iowa, and her last transaction as an elected official was to sell herself her burial plot.

Carla read at least a book a week for more than 30 years.  She wrote widely-followed columns on the Internet site www.Offenburger.com for over 20 years. She became an “insecure quilter,” then a good one, and since 2015 made 25 personalized quilts for women in her life. She was an avid fan of Vanderbilt University baseball, and in the past year carried on an inspiring correspondence with the “VandyBoys” coach Tim Corbin. And, oh did she love her flower gardens – all eight of them around her farmhouse. 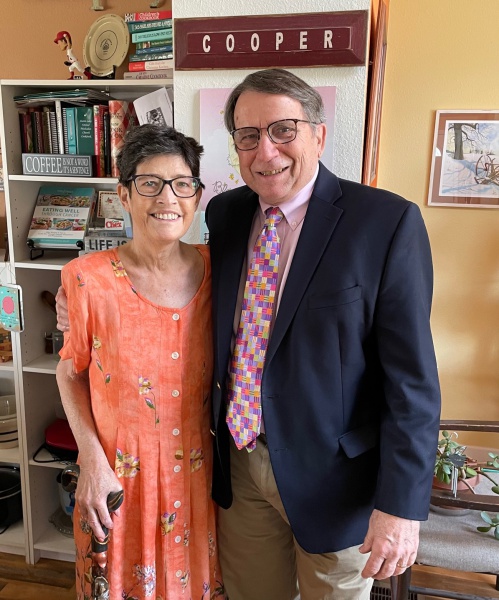 The Offenburgers dressed up for Easter this past spring.

Preceding her in death were her parents and Bolekwa Sifo, an exchange student from South Africa who became part of the family.

Carla’s visitation will be Thursday, July 29, from 5 to 8 p.m. at Slininger-Schroeder Funeral Home in Jefferson. Her funeral will be Friday, July 30, at 10:30 a.m. at Plymouth Church in Des Moines, with lunch following at noon. Interment of her cremains will be Saturday, July 31, at 11 a.m. at Franklin Township Cemetery just north of Cooper.

Memorials can be made to Plymouth Church, 4126 Ingersoll Ave., Des Moines 50312, “designated first for new friendship information pads for each pew.”

“Finally, I’d like a church potluck to follow my funeral service – to include a few pans of my sister Chris’ homemade lasagna and my favorite chocolate wacky cake.  I’d like my sister Tammie’s pickle roll-ups.  The Offenburger women should be bringing homemade pies.  Everyone attending the lunch should be invited to bring a favorite dish to be shared at a festive, fun and happy event. I’d prefer no tuna dishes!  This invitation should be in my obituary.” 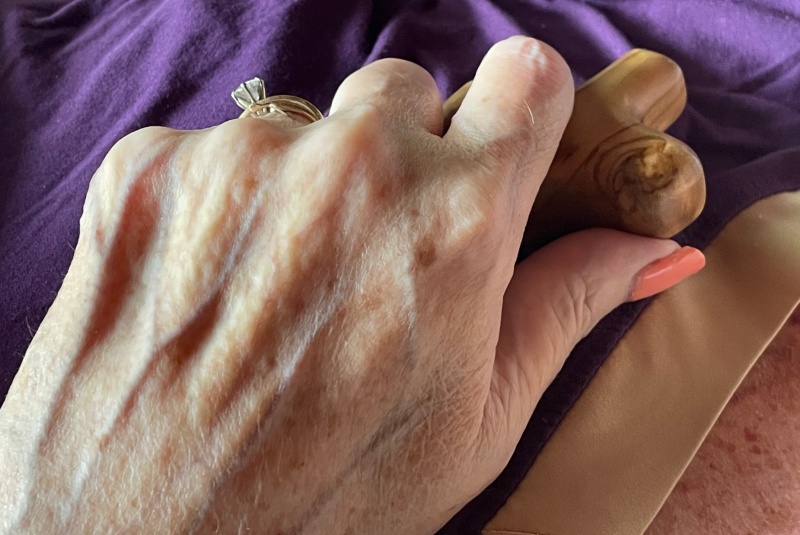 Carla Offenburger held this “clinging cross” for the last 18 hours of her life. And she left this world with nice fingernails, done over the July 4th weekend by her granddaughter Lindsay Offenburger.

27 thoughts on “Carla Offenburger got big things done in life. Here are her obituary & final instructions for us.”