RIPPEY, Iowa, July 19, 2014 — When you think about it, this little farm town of 292 hardly seems like a place where you’d find one of the neatest events in college athletics, but I’ve long thought that is the case. And while that event will continue, every-other-year, we lost its grand matron this week with the death from cancer of Velda DeMoss, 74.  She was, in fact, one of the top characters in all of our Greene County.

The first time I met her, 10 years ago when we moved to an acreage near the neighboring town of Cooper, she introduced herself by saying, “They call me the ‘Mouth of Rippey’.”  Of course, I liked her immediately.

She was the local chatty news correspondent (“Velda’s Varieties”) for area newspapers.  She was president of the Friends Of Rippey community booster club.  She was past-president of the Greene County Historical Society.  A mainstay of the Rippey United Methodist Church, where she was memorialized Thursday afternoon and Friday.  She was a devoted mother, grandmother, great-grandmother, sister and friend. 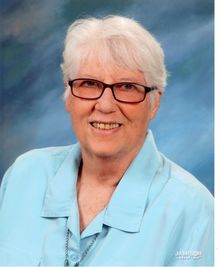 And in the fall of 1986, she was the founder of what has become a wonderful tradition of the nationally-known Central College football program from Pella, southeast of Des Moines.  The Flying Dutchmen, as the Central football teams are known, are a perennial power in NCAA Division III and the Iowa Conference.  One of their yearly opponents is Buena Vista University from Storm Lake in northwest Iowa.

After one of Velda’s four sons, Marc DeMoss, started playing for Central in 1982, the family began following the team to the Central-BV games.  Every other year when the game was played in Storm Lake, finding a good, quick meal for the Central players on the 180-mile trip back to Pella was always a challenge.

Velda DeMoss came up with the idea of having the Rippey Methodists — who’ve always been known for their hospitality and outstanding cooks — prepare and serve Central’s team meal after their football game in Storm Lake.  Every other fall for 28 years now, they’ve served up heaping platters or bowls of roast beef or pork, ham, potatoes, gravy, vegetables, salads and more homemade pies than you can imagine.

What small town church would dare try to feed a traveling college football squad?  DeMoss knew the Rippey Methodists could do it, and indeed they have.

By the time of the first supper in 1986, there was another Central student from Rippey involved in the football program.  Linda Borgeson was a student manager for the team, and she also played basketball and was a softball manager for the Dutch.  So DeMoss drafted her great friend Jean Borgeson, Linda’s mother, to help with the meal.  Later Vernon and Alice Fritz volunteered to help when their daughter Alice was going to Central, and ditto for Mary and Gary Weaver when their son David was a student there.  Schyler Bardole, also from Rippey, is on the Central team now, so lots of Bardoles are helping with the meal, too.

This fall’s supper is set for the late afternoon of Nov. 8.

Even though I’m a BV fan, I’ve sneaked into a couple of the Central meals in Rippey over the years so I could write about them. 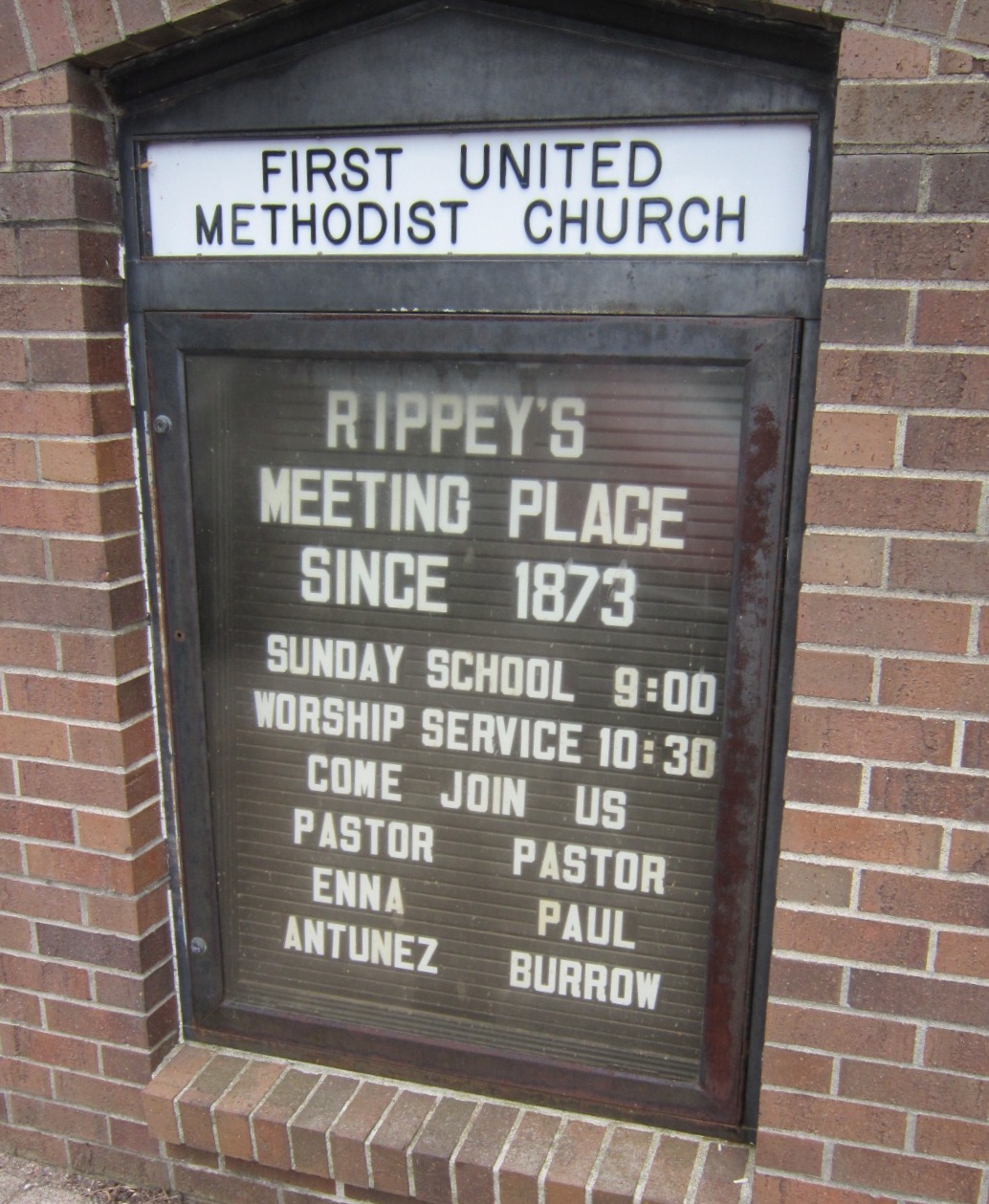 The church in Rippey has indeed been a great “meeting place” in the small community.

The meal, DeMoss once accurately described it to me, is “a happening.”  She said that the game generally starts at 1 p.m. in Storm Lake.  When it’s over, “a Central coach will probably give me a phone call as they leave Storm Lake, and then the supper officially starts when we hear the air brakes on the bus!  Probably close to 6 p.m.  They eat quickly, and politely, and are on their way.  We feel they get a better and bigger meal than a restaurant, and it is priced better.”

The profits have been divided between the church and youth fellowship groups in the area.

The looks on the Central players’ faces when they see all the food, and see the enthusiastic Rippey Methodists and youth helpers scrambling to serve them, tell you how grateful they all are.  Veteran players have always coached up the freshmen on what this is all about and, as I said earlier, it’s become a favorite of Central players, coaches and administrators alike.

“Velda was such a good-hearted person and we cherished her fierce devotion to the Dutch that extended far beyond her son’s college years,” said Larry Happel, Central’s director of communications who for decades was sports information director.  “I don’t think anyone connected with the Central football program over the past 25 years will ever make a football trip to Storm Lake without thinking of her.”

Before they get back on their buses, the Flying Dutchmen always serenade their Rippey hosts with their “CUI” anthem — that’s the acronym for the school’s ambitious formal name of “Central University of Iowa”– which ends with this chorus:

And then they conclude it with their traditional yell:

So at the visitation Thursday evening, I wasn’t at all surprised to see a large floral arrangement from Central College Football.  The note called DeMoss “one special lady” and promised that “this special bond we have had with her will live on and continue.”

And then there was the closing line on the note: “May her glory never die.”   At first that puzzled me.

Then I discovered where it came from — in that Central yell, which I’ve heard echoing through the Rippey Methodist church hall.  Nice touch. Velda DeMoss would have loved it, for sure. 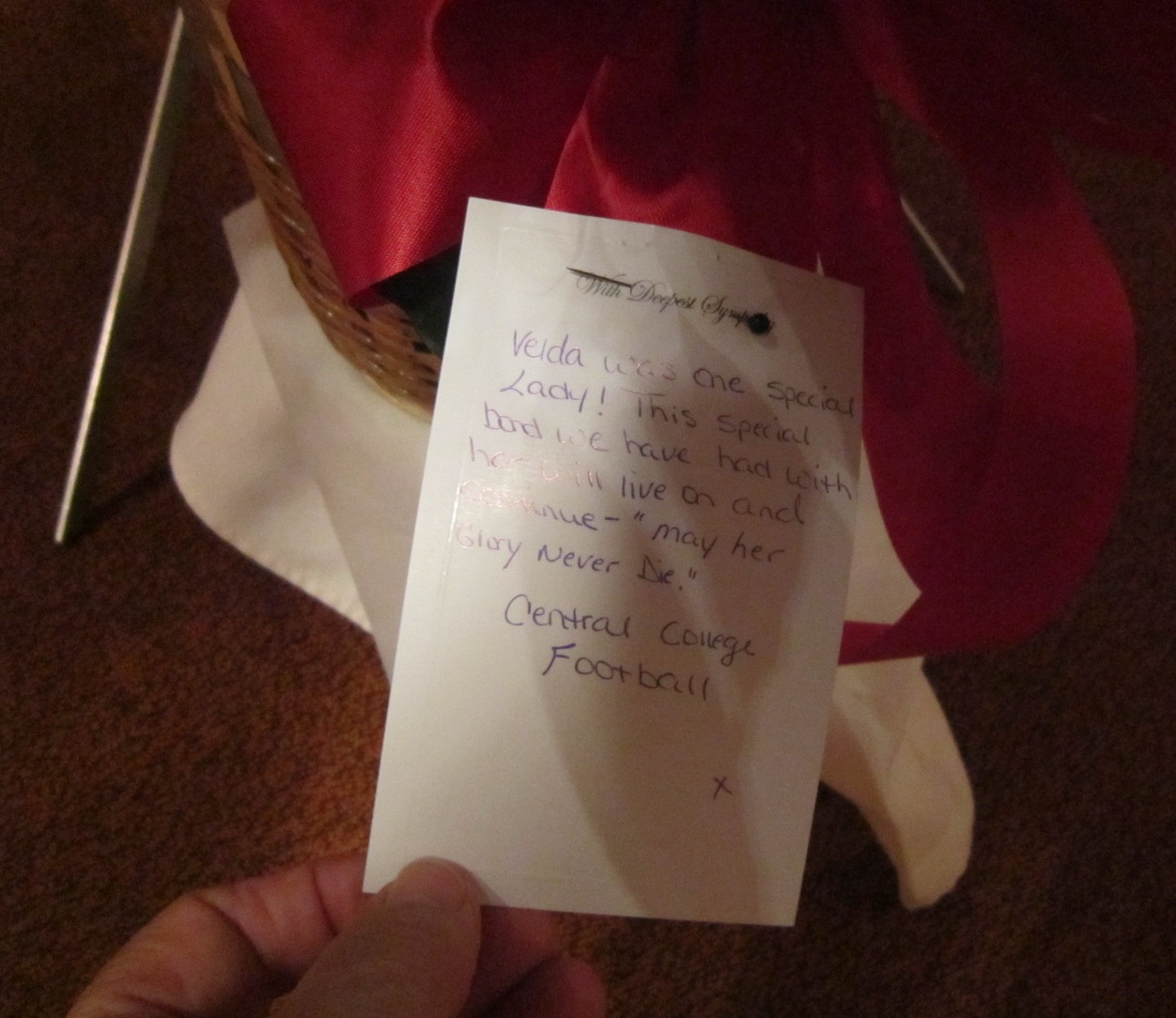 One thought on “Farewell, Velda DeMoss, founder of a wonderful college football tradition”