CARROLL, Iowa, Oct. 4, 2018 – In a town so Catholic that the local radio station still broadcasts the rosary every afternoon, I just went to the most gut-wrenching, emotional and sad church meeting I’ve ever attended.

On Wednesday evening, Bishop Walker Nickless, spiritual leader of perhaps 100,000 Catholics in the Catholic Diocese of Sioux City, came to Carroll “to be with my people, my flock.” And he was there to apologize profusely for the sexual misconduct of priests and bishops across the U.S. and right here in Carroll County, too. He acknowledged “my own feelings of being angry, being disappointed, being ashamed.”

“I was in a restaurant recently,” Nickless said, pointing like he was indicating one in northwest Iowa somewhere, “and a man came over said to me, ‘How many kids did you abuse today?’ I didn’t even know him. I’d never met him. And he asked me that.”

Here in Carroll – in the first of three courageous and essential “Conversations with the Bishop” that he’s holding around the diocese in the next month — he asked the people for their thoughts on this “crisis” in Catholicism. They gave him nearly two hours’ worth, some of them delivered in tears, others in outrage, still others in disgust. Several times he stammered in emotion and tried to bat away tears at the grim, criminal and tragic stories he was hearing. 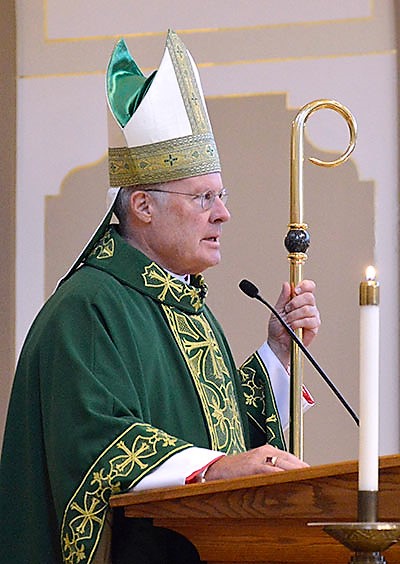 Bishop R. Walker Nickless of the Catholic Diocese of Sioux City.  The bishop is shown here during a mass in the past. He conducted Wednesday’s discussion while wearing his customary black suit, vest and Roman collar. (File photo from Carroll Daily Times Herald)

With him were diocesan staff members Rev. Brad Pelzel, the vicar general; Amy Bloch, executive director of Catholic Charities for the diocese and a veteran counselor, and Susan O’Brien, director of development and communications. All are playing key roles for the diocese as it deals with a scandal that has rocked the church.

–One woman said she knows of about 10 adults in the community who were abused by a priest or priests here in past years. She believes the cases were unreported, never resolved “and they are still suffering because of it.” Bishop Nickless urged her, if she is still in contact with the people, “to have them come forward so that we can try to help them.”

–Barry Bruner, an attorney who is Catholic himself, said that in the 1990s, when he was serving as Carroll County Attorney, he learned that a 13-year-old girl was alleging sexual misconduct by a local priest. He began his investigation, and went to see then-Bishop Lawrence Soens in Sioux City. “The bishop said, ‘You presume there are victims, I presume it didn’t happen’,” Bruner said. “And then he threw me out of his office.” Charges were filed, but the case was dropped when the girl and her parents refused to take part in a court proceeding. The priest was reassigned, and now is reportedly still serving in California. Soens retired in 1998. In 2002, Soens himself was charged by several former students at a Catholic high school in Iowa City with sexual misconduct in the 1960s. He denied the charges, but the case was kept quiet until 2005, and then in 2008 a diocesan review board determined that the charges were “credible.” Soens is now living in a retirement home.

–Several people asked that the Sioux City diocese follow the example of the Archdiocese of Dubuque, which apparently has used its own media to list publicly the names of priests in the Dubuque Diocese who have been “credibly accused” of sexual misconduct, going back to the beginnings of the diocese. “People deserve to know if they’re living close to someone like that,” one woman said.

–Two or three people warned the bishop that, as one man said, “we are losing the millenials over this. They’re moving on” to other denominations. A woman added, “Our kids have watched this happen, and they’re not so interested in church anymore.” A man thanked the bishop for holding these public meetings with the people, but said he was “so disappointed” in the turnout. “This place should be packed, and I count about 50 people here,” in the parish hall of Holy Spirit Church. “And look at us. There’s only four or five of us under 40 years old.”

–In a particularly touching and somber moment, retired priest Father Tim Schott, a favorite in the Carroll area, told the bishop that, because of all that’s happened, good priests who’ve never been accused of any misconduct feel they are now under constant public suspicion. He said the fact that many bishops for so long took no action against offending priests, has compounded that public suspicion. Schott said he hopes “that before I die, I hope I hear a bishop apologize” for what that negligence has done to all the good priests. Bishop Nickless paused, stood and said softly and very seriously, “I’m sorry, Father, if I made you feel like you’re under a cloud. I am sorry.” Schott, just as softly and directly, answered, “Thank you. It’s been a long time.”

Wow. I never dreamed I’d see my Catholic Church so wracked, so wrecked.

There were always rumors, of course. But until the scandal erupted in the Archdiocese of Boston in 2002, most of us thought incidents of sexual abuse by clergy were very rare.

Father Pelzel spoke about the history of it, nationally.

“What happened? Our country changed. Maybe it’s because we became more urban, less rural. But all of society changed, our culture changed.”

Now, Pelzel continued, “the majority of cases we are dealing with today took place from about 1960 to 1985.”

Subsequently, many changes and improvements have been made in the way candidates for the priesthood are screened, trained and educated. Following the revelations of 2002, there were major reforms in church operations to investigate, discipline and banish offenders. The number of incidents plummeted.

But while there’s been some progress, “we know the total number of cases, all-time, have reached 12,000 to 14,000, and the most disturbing part of this is that those are only the cases that were reported. We know there are many more that have not been reported.”

What has moved all this from scandal to crisis is the 884-page Pennsylvania grand jury report that was made public in mid-August by that state’s Attorney General Josh Shapiro. He reported that an 18-month-long investigation produced evidence that more than 300 priests in six dioceses in Pennsylvania sexually abused thousands of children over the previous seven decades. Two different people in the meeting in Carroll said they attempted to read that report — one “made it 600 pages” but couldn’t finish “because it was making me sick,” he said.

On the heels of that, there have been several new reports of cover-ups by bishops and even cardinals – in the U.S. and several other countries – of sexual misconduct by priests.

All that has justifiably brought demands from Catholics and non-Catholics alike that this must be stopped – now.

Nickless said the U.S. Conference of Catholic Bishops meets next month. “We’re all upset,” he said. “We want something done.”

Pelzel added, “We’re the church. We should be better, and we’re going to be better.”

As you’ve probably read, Pope Francis has condemned the crimes, apologized and has summoned the Council of Cardinals for a 3-day summit at the Vatican next February.

Bishop Nickless said the church superiors want to carry the prayers and thoughts of their people into those high-level meetings.

So, just as many of my Carroll County neighbors were doing, I offered him my own idea.

“I’m a cradle Catholic, and I love Catholicism,” I told him, when he called on me. “And I think the time has come to consider change for our clergy.”

I have deep respect for so many priests and bishops I’ve known over my life – including Bishop Nickless himself, especially now that he is taking this crisis directly to the people like he’s doing. I understand and appreciate the many sacrifices they’ve made in their lives, the years they’ve devoted to education and training, their often selfless service to the rest of us.

But, I told him, the celibate priesthood is a model of clergical leadership that has now impeached itself.

If priests and bishops believe I’m wrong, and believe that the celibate priesthood should be continued, they at least need to be explaining in homilies, in conversations and in public essays what the rationale is for it. It no longer makes sense, at least to me, if it ever did.

Now, largely because my wife Carla Offenburger is a devout Protestant, I have also come to know many ministers of various denominations. Many are as holy as the best priests I’ve known. In my judgment, they’re also happier and more whole.

And that’s why I think the time has come for the Catholic Church to go back to traditions of an earlier time in its history and allow priests to marry and have families. Reforms should include inviting women into the priesthood. And while we’re doing it, I’m for allowing gay clergy as well as straight clergy. Sex for Catholic clergy? I just want it to be safe, legal, consensual and moral.

As is, it’s not just the sexual misconduct scandal that is threatening the future of Catholicism. We have the somewhat related problem of having so few priests that bishops – Nickless among them – are having to close many smaller parishes, some of them still vibrant and financially viable, just because of the priest shortage

I believe that changing the priesthood – opening it up as I’ve described above – will bring forward many more people who would love to live their faith more completely by having careers in the Catholic ministry. That’s even if the education, spiritual formation and practical training requirements are as extensive as they are now – and they should continue to be.

Well, Bishop Nickless and Father Pelzel certainly were not swayed.

“I love being a celibate,” Nickless answered. “It’s an opportunity for me to be in love with Jesus Christ. And in love with the church, which is my bride, and I will gladly lay down my life for it.”

He also said in other faiths, “there is sexual abuse, even among married clergy.”

Pelzel said “if I had a choice, I wouldn’t get married. I wouldn’t be able to give enough time” to both a family of his own and to his church work. He characterized my idea as “a knee-jerk reaction to a larger social problem,” and contended that Protestant churches “can’t find enough people to fill all their clergy positions, either.”

In closing, let me admit that, although no one objected to me attending the Wednesday evening meeting, or that I spoke up, I was sort of an interloper. While I live in the Sioux City diocese, I’m actually a member of St. Patrick Catholic Church in Perry, which is across the line in the Des Moines diocese. I was a member of two different parishes in the Sioux City diocese earlier in my life, and I’ve long been active in church activities in both dioceses.

And let me reiterate, I love Catholicism. It still works.

7 thoughts on “The crisis in Catholicism spills out in Carroll, Ia., and everywhere else, too”