COOPER, Iowa, April 3, 2018 — Fifty years ago this week, a college pal Mark McCrackin and I spent a night in “a unique moment and place in American history,” as he later wrote of it. We spent that night, April 4, 1968, in the rooms of the Rev. Martin Luther King Jr. and other key members of the civil rights movement at the Lorraine Motel in Memphis, Tennessee — hours after King had been assassinated on a second-story walkway there. Over the decades, I thought several times that McCrackin and I should go back there together.

I wish we could be there now, on the 50th anniversary of King’s death. Alas, McCrackin died from cancer this past January at his home in White River Junction, Vermont.  He was 68.

When his former wife Nanci McCrackin, of Peterborough, New Hampshire, who went to Vanderbilt University with us, was helping sort through Mark’s documents and computer files, she found an essay that he wrote 10 years ago — on the 40th anniversary of the King assassination.  In it, he tells our story, about that night that forever changed both of us — and changed America, too.

It was never actually published anywhere, as far as we know.  I share it here now, with Nanci’s permission.

Forty years ago, on April 4, 1968, I was present at the Lorraine Motel in Memphis, Tennessee. The Rev. Dr. Martin Luther King Jr. had been assassinated there a couple of hours earlier, and his blood lay in a small pool on the second-floor walkway outside of his room. Throughout the long night, his colleagues and I walked around the puddle of blood as we passed from room to room. For 40 years, it has been the blood that I remember most, and during that time I haven’t thought of Dr. King without recalling his blood. 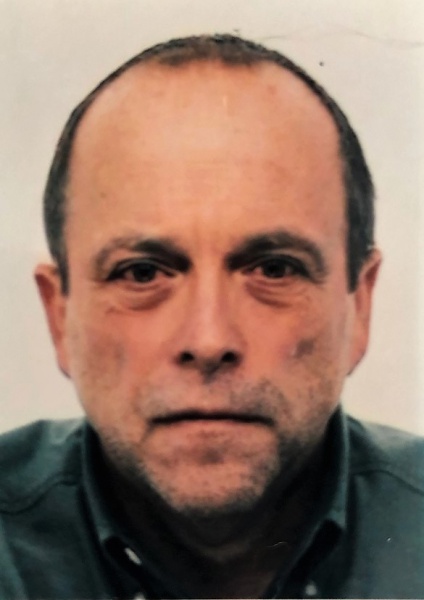 The photo at the right shows the author of this story, Mark McCrackin, in recent years when he lived and worked in New Hampshire and Vermont. He finished his career in 2011 as publications manager at the Tuck School of Business at Dartmouth College.

At mid-afternoon that day, I had heard the radio bulletin that Dr. King has been shot. I rushed to tell my friend Chuck Offenburger, who was in the student newspaper office at Vanderbilt University in Nashville. I was a 19-year-old sophomore there, and Chuck and I both worked for the paper. Chuck had the instincts of a real journalist, and he immediately said that we had to go to Memphis. Chuck also had a connection. His brother Tom Offenburger worked for the Southern Christian Leadership Conference as Dr. King’s press secretary. Tom was in Memphis with Dr. King, organizing striking sanitation workers. Or so we thought.

Within minutes, we were speeding to the Nashville airport for the next flight to Memphis. On the short flight, passengers milled in the aisles and talked about the shooting and about their own safety in Memphis. We didn’t know that shortly after we took off, Dr. King had died. By the time we were on the ground in Memphis, the black neighborhoods of the city had become dangerous as crowds of shocked mourners evolved into angry mobs. Chuck and I had to cajole and bribe a taxi driver into taking us to the Lorraine Motel.

Our taxi took us not just to a motel but to a unique moment and place in American history. Here was the body of the American civil rights movement painfully stumbling, after its heart had been blown out. Ralph Abernathy, James Bevel, Jesse Jackson, Hosea Williams, and Andrew Young roamed the concrete walkways searching for the next step. In the next few hours, Chuck and I would witness the future taking shape. And we would gingerly move past a pool of blood.

When we discovered that Tom Offenburger had returned to Atlanta earlier in the day, it was Chuck’s remarkable gift for instantly forging meaningful connections that allowed us to remain at the motel. We couldn’t have been the only white people present, but we were certainly white strangers in a place full of fear and mistrust. While Chuck’s brother’s name made us known and our youth made us less conspicuous, it remains remarkable to me that we weren’t forcibly hustled out of the place. Oddly, I don’t remember any reporters on the scene. Not one. All mainline reporters would certainly have all been white at that time, and they were probably frightened to come to the Lorraine. A good recommendation for being young and stupid! 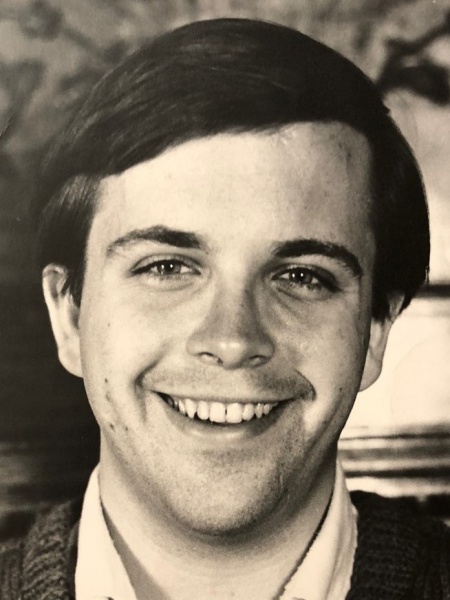 This photo at the right shows young reporter Mark McCrackin in about 1968 at Vanderbilt University.

Throughout the night, we moved among the motel rooms as if we belonged there. And we sat and listened as the lieutenants discussed immediate plans and the more distant future. There was much telephoning. Very late, the bedside phone rang, and in an instant the person who answered was shouting “It’s Kennedy! Get everybody in here! It’s Bobby!” I can’t recall who did the talking on our end, but it was meaningful that Senator Kennedy had arranged for a plane to carry Dr. King to Atlanta, his home. Of course, Bobby Kennedy knew all about airborne cortèges.

The next morning, Chuck and I returned to Nashville. I can’t remember how we got home; there were gun battles in the streets of more than 100 cities across the nation. Our reportage of that night in Memphis surprised our readers and became momentarily famous among college journalists. In the next couple of days, we talked ourselves out of being arrested for breaking curfew when we drove to Nashville’s Tennessee State University (still predominantly black) to speak with students. I traveled to Atlanta, my own home city, to take part in and report on Dr. King’s funeral. The old Atlanta airport was flooded with thousands of young pilgrims. Even my parents relented to my requests and nervously allowed several strangers to sleep at our house. Yet no one could know in April that this was only one horrible episode in a horrible year. 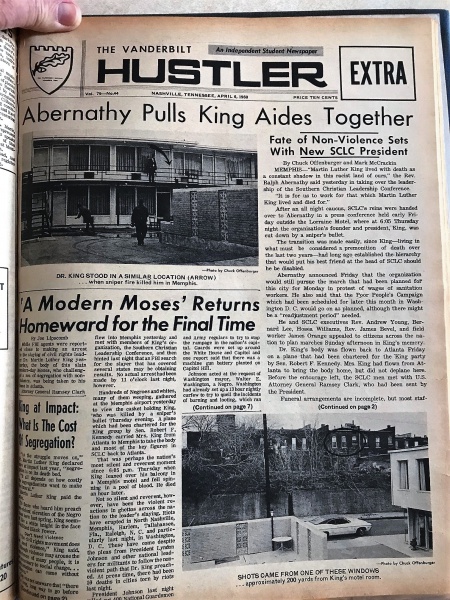 The front page of an “EXTRA” edition of the Vanderbilt Hustler student newspaper, published on Saturday, April 6, 1968, with special coverage from Memphis by Mark McCrackin and Chuck Offenburger.

Now let me tell you finally about that blood. At some point, it was carefully removed from the concrete walkway, respectfully scooped with shirt cardboard into a jar. I have a clear and specific memory of that piece of cardboard. At one point during that night I lifted it up. I myself don’t know how, but some of the blood famously found its way onto Jesse Jackson’s shirt and became a public-relations vehicle for him and a point of bitter contention among black leaders for decades. For me, in 1968, the blood became a jolting memory. But now, 40 years later, I must ask myself: where is the blood of the martyr? Not Ralph Abernathy’s little jar and not the piece of cardboard. Where is the true blood of Dr. King?

Most of you will never understand how much America has changed in the last 40 years. I come from a place and time that are so different from now: America’s violent and deforming apartheid. We still live with the legacy of that, of course. No one can be blind to it. The sunrise I saw at the Lorraine Motel on April 5, 1968, was a ghastly punctuation in the generation-long story of struggle and triumph.

But now we live in a different, better time. Do not think otherwise. I am immeasurably proud of our country, to know that Dr. King’s blood now flows through all Americans. His substance has become ours. His spirit has become ours. All of ours. 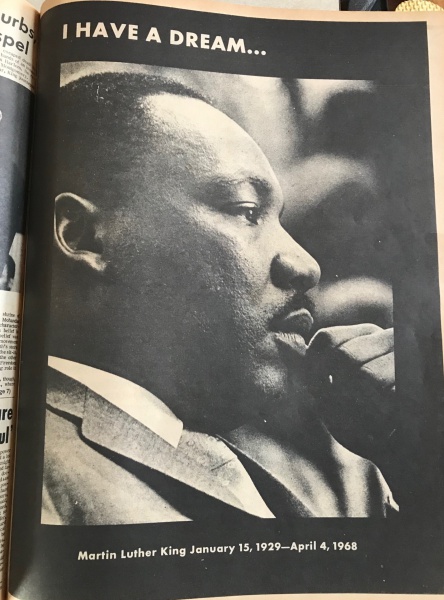 Cover of a special 4-page pictorial salute section that ran in the “EXTRA” edition of the Vanderbilt Hustler student newspaper on Saturday, April 6, 1968.  The salute included several photos of Rev. Martin Luther King Jr. and quotations from some of his greatest speeches.

You can email our columnist at chuck@Offenburger.com or comment using the handy form below here.  You readers of Offenburger.com know a good deal about me, but I thought you might appreciate knowing more about my friend Mark McCrackin. His obituary as it was published on Feb. 4, 2018, in the Atlanta Journal-Constitution in his hometown in Georgia.

Mark Owens McCrackin died on Tuesday, January 16, 2018 at his home in White River Junction, VT after a long and courageous battle with cancer.

Mark was born in Seattle, WA on January 21, 1949. He was the son of Joseph R. McCrackin and Frances L. (Owens) McCrackin. He grew up in Atlanta, GA and graduated from the Westminster School. He went on to Vanderbilt University, where he received a B.A. in art history and then to the University of Washington for advanced study in architecture.

Mark worked in bookselling and publishing in Seattle and New York, which led to a long career in writing and marketing with companies such as Atari and Coleco. In the late ’90s, Mark moved to New Hampshire and Vermont’s Upper Valley, where he worked with GDT/Tele Atlas (now TomTom) and Dartmouth’s Tuck School of Business in their creative services departments, retiring from Tuck in 2011.

An outspoken Democrat, Mark served as a burgess of the Borough of Stonington, CT in the early ’90s.

Mark loved to travel, having visited 46 countries on 6 continents. He also had expertise in landscape and large-scale garden design. His passion for outdoor space was evident early on through his leadership in the Save Open Space campaign, which preserved the pastoral beauty of Vanderbilt’s old central campus.

His friends and family were blessed to learn many valuable lessons from Mark, including how to throw a good party, tell a good joke, and the importance of respecting all of nature’s creatures.

Mark leaves behind his partner of 20 years, Keith Burnor, and his former wife and best friend of 50 years, Nanci McCrackin of Peterborough, NH. He was predeceased by his brother, Charles A. “Alec” McCrackin. He is also survived by his nephew, Jordan McCrackin of Dubai, his niece, Miriam McCrackin Lochridge of Atlanta, and his sister-in-law, Bobbie McCrackin also of Atlanta.

In accordance with Mark’s wishes, there will be no formal service. The family is planning a celebration of Mark’s life in the spring. Memorial contributions can be made to the Upper Valley Humane Society: www.UVHS.org.

In a new column on April 3, 2018, Chuck Offenburger writes more about his brother Tom’s work with Rev. Martin Luther King Jr. and others in the civil rights movement — and the unusual experiences that gave Chuck as a college student in the mid to late 1960s. You can read that column by clicking here.

7 thoughts on “Our haunting memory of the night Rev. MLK Jr. was killed in Memphis”