JEFFERSON, Iowa, Nov. 24, 2014 — I’ve always said the best thing about my career is that it has let me meet and come to know many of the most notable Iowans of our time. But one that I’ve missed is Sarah Grant, who is probably the most famous and successful artist working in the state today, the founder of “Sticks,” the art and furniture company in Des Moines that has works selling in more than 100 galleries across the U.S.  I’m finally catching up to Grant at 2 p.m. on Sunday, December 7, here in Jefferson, when she has agreed to sit with me in our community’s historic Gallup House for “A Conversation with Sarah Grant,” and you’re all invited to join us.

“I love the idea of being interviewed by you,” Grant told me after I invited her. “So, get cracking on your questions!”

Indeed I’m doing my research to be ready for our chat, which will be the lead-off event in a third annual “Nativity Festival” that benefits the Habitat for Humanity organization’s good works here in Greene County. 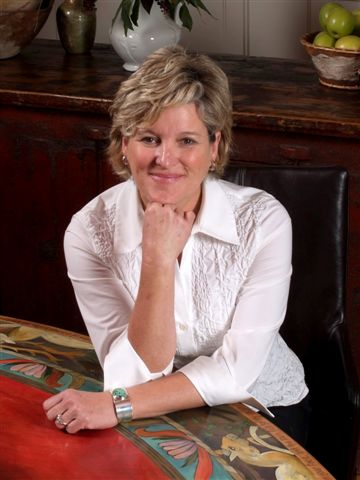 There will be no admission fee for the reception and conversation, although we will take up a free-will offering that will go to the local Habitat group.  And we will unveil a large, brand new, Sticks-made Nativity display — a dozen pieces that will spread four feet wide when properly displayed, with the largest pieces about 15 inches tall.  Habitat has specially commissioned Sticks to create this Nativity for this year’s festival.  Their artists are at work on it right now. It will be offered for sale in a silent auction, which will be held open from the Dec. 7 reception until the close of the actual Nativity Festival one week later, on Sunday, Dec. 14.

The festival on the 14th will be held at the First United Methodist Church in Jefferson.  It will begin at 3 p.m. when a display of 75 or more locally-owned Nativity sets will be open for public viewing.  At 4 p.m., a community concert will be presented in the church sanctuary, featuring local church choirs, small groups, two soloists and a poet.  At 5:15 p.m., there will be a soup supper and a spirited auction of pies from Greene County’s best bakers.  And we’ll then formally accept the highest bid that has been made by then for the special Nativity from Sticks.  All proceeds go toward Habitat’s projects in this county.

Sarah Grant is a native of Ames whose art education was at Iowa State, Colorado State and the University of Iowa, where she earned bachelor and master’s degrees in printmaking and another master’s in painting.  Her colorful, fun Sticks art comes not only in individual pieces, but has been designed into renovations of business offices and even whole hospitals, like Blank Children’s Hospital in Des Moines.  They have work on permanent display in several churches and a synagogue; a whole room in the Hotel Pattee in Perry, and in several buildings on the Iowa State campus.  Another of their unique projects was making, carving and painting a table for the Gallup House that tells the story of the American pollster George H. Gallup, who grew up there.  Grant and I will probably have that table right in front of us during our interview on December 7.

Like so many people in Iowa, I’ve been fascinated watching Grant’s career and her company Sticks grow.  They reached a point where they were employing 200 people, many of them artists, and their headquarters studio in the southwest part of Des Moines is one of the hippest workplaces in the state.  I remember first starting to see her work in the 1980s, and then it seemed like suddenly, it became a national sensation, showing up everywhere.  One thing that has really impressed me is that while she’s a tremendous artist, she also has learned to be a terrific business person – in fact, one heck of an entrepreneur.

I’ve long wanted to connect with Grant for an interview and story.  But somehow it just never happened until now, when I’ve gotten involved helping on the Habitat Nativity Festival.  I’m the volunteer who has lined up the talent for the concerts.

There is a nice coincidence that has led to the conversation I’m getting ready for now.

From the time three years ago when local Habitat volunteers decided to start a Nativity Festival as their one major fundraising event of the year, they’ve thought about offering a Sticks-made Nativity display for sale as part of it.  They are very popular among Nativity collectors, especially those who are also collectors of Sticks art.  However, the resources to acquire one just haven’t been available until now.  Then a couple of years ago, my wife Carla Offenburger was at a PEO event in Des Moines where Grant was speaking.  That day, she told the story of how back in 1985, the first commission of her professional art career was for a Nativity scene, and Sticks has been making them ever since.  We all thought that story has a nice tie to our Nativity Festival, which has the Habitat theme, “Everyone deserves a stable home.”

So this year we asked Sticks President Rachel Eubank, who is Grant’s daughter, for her help in buying a large Nativity, and she offered our group a substantial discount from the retail price.  We are paying $890 for the one being made, and that cost will be the starting, minimum bid in the silent auction.

Eubank was also nice enough to put me in touch with her mother.  I asked Grant if she’d by any chance be willing to come to Jefferson on a Sunday afternoon before Christmas for a reception to help us showcase the Nativity display, and also speak on her art and her career.  Or if it’d be easier for her, I said, I would enjoy interviewing her in front of the crowd.  I told her it’d not only be fun, but we could do some good with it.  And she opted for the interview.

Scott Purvis, president of the New Jersey-based Gallup & Robinson, Inc., the advertising research & consulting firm that George Gallup co-founded, became a Sticks fan when he was renovating and furnishing the Gallup House, which the company bought a dozen years ago.  They operate the octagonal home as a center for business retreats, meetings and social receptions, with overnight accommodations available.  He agreed to make the house available for the Grant interview, as the company’s contribution to the Habitat fundraising effort.

We hope to be able to seat about 75 people, and I want to hold a few of those seats for art students.  And I’ll allow a few questions from the audience, too. 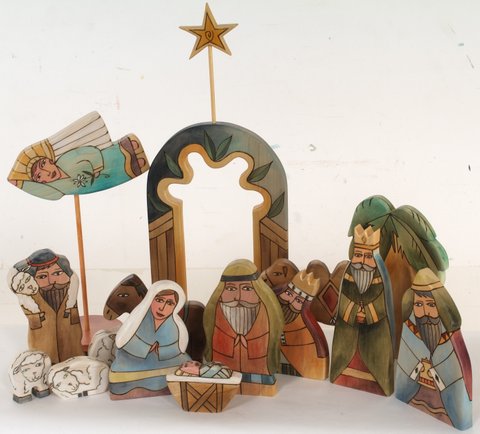 Here is a large Sticks-made Nativity set, similar to the one to be offered at silent auction in the benefit for Habitat for Humanity’s work in Greene County.  The display stretches about four feet wide, with the largest pieces about 15 inches tall.