One reason is that I’m here, and I wrote the 2002 book “E. Wayne Cooley and the Iowa Girl: A celebration of the nation’s best high school girls sports program.”  Cooley, who died last May at the age of 90, headed the Iowa Girls High School Athletic Union for 49 years before his retirement in 2002.  That is the organization which administers girls sports in Iowa, and Cooley was the promotional wizard who gave our girls state basketball tournament a national reputation.  Many of you know he was a native of our neighboring town of Coon Rapids.

IPTV, which this year is doing the television coverage of the girls basketball tournament championship games for the first time, is including a feature on Cooley in their coverage. They were looking for a suitable, quiet place where they could videotape me telling my favorite stories about him.  Travis Graven, a producer-director for IPTV who also happens to be a graduate of East Greene High School, suggested his alma mater’s gym in nearby Rippey.  We were there Monday afternoon, in case you saw the IPTV production vans out front and were curious. 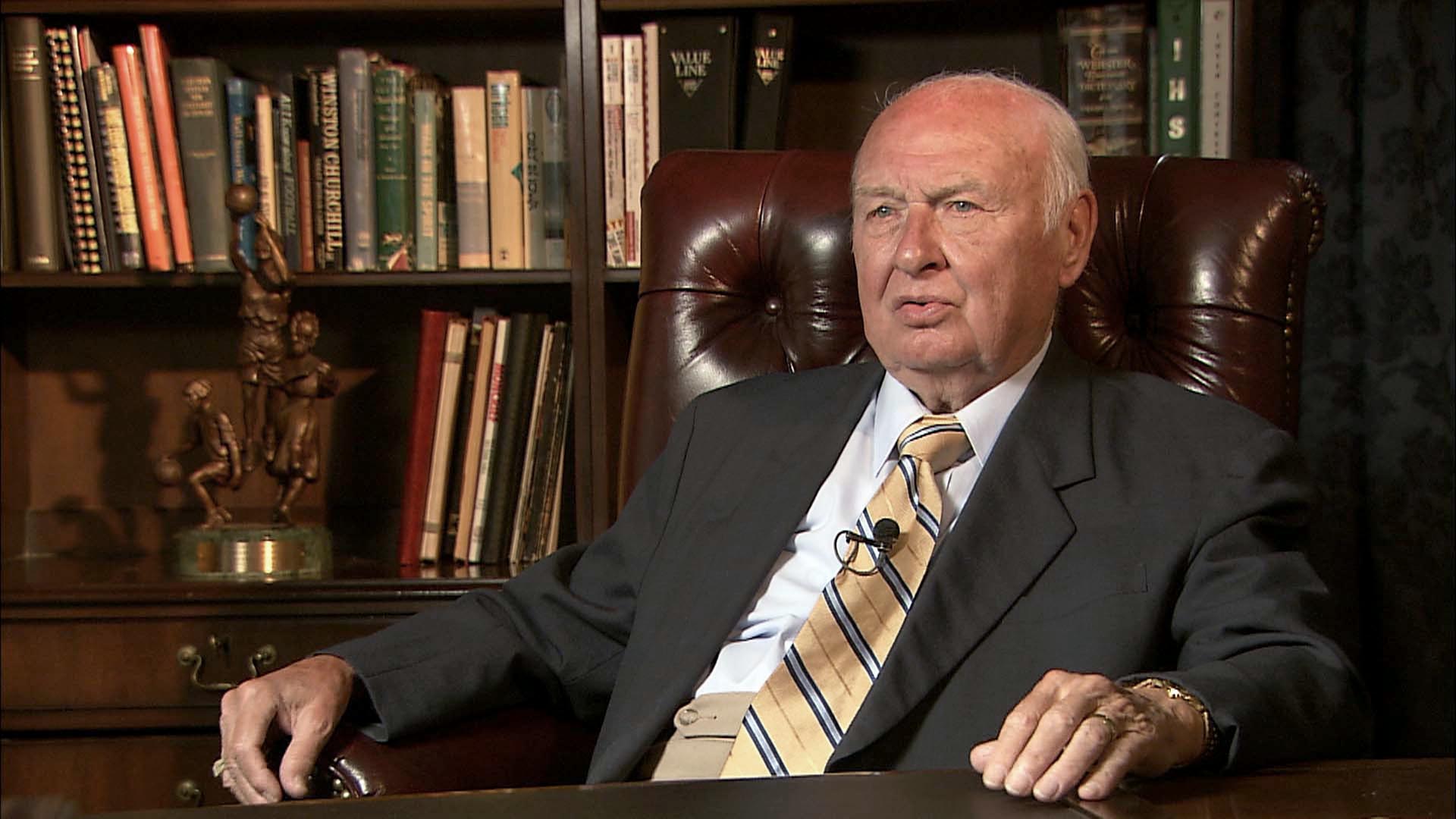 
While videographers Rick Fuller and John Torpy operated four cameras, senior producer Andrew Batt sat in front of me and asked questions.  His first one was a bold one, and a good one.

“It will probably seem like heresy to people who know the story,” he began, and I’m quoting him as well as I can remember, “but the fact is that E. Wayne Cooley is now deceased, he retired more than a decade ago, and there are a lot of new people on the scene now who don’t know anything about him.  So, tell us, who was E. Wayne Cooley?”

Edward (the first name that he never used) Wayne Cooley “was probably one of the most significant people who ever lived in Iowa,” I explained.

When you make a statement like that, you better be able to defend it.

He was the son of a Methodist minister, an athlete, singer, speaker, Navy officer in World War II, teacher and coach at Nevada, Ia.  Then he became a coach at Grinnell College, an advisor to the college president and a successful fundraiser.  He learned business and finance from Grinnell benefactor Joe Rosenfield, who ran the old Younkers Department Store empire headquartered in Des Moines.  Then in 1954, Cooley was coaxed by legendary Des Moines Tribune sportswriter Jack North, Rosenfield and others to take over leadership of the IGHSAU, at a time when the girls sports organization was near financial collapse and scandal.  Cooley’s predecessor pleaded guilty to a minor embezzlement and served a bench parole.

There was one sport for girls in Iowa then – six-on-six basketball.  Actually, that meant Iowa was offering much more opportunity to girl athletes than most other states, since only a few others offered any interscholastic competition for their girls.

Among all the other challenges young Cooley was facing, the decision had already been made that the girls state tournament would be moving in 1955 from its traditional home at the Drake University Fieldhouse to brand new Veterans Memorial Auditorium.  At Drake, if you drew 5,000 fans, you had a huge crowd.  Vets, which seemed cavernous, could seat more than 15,000. 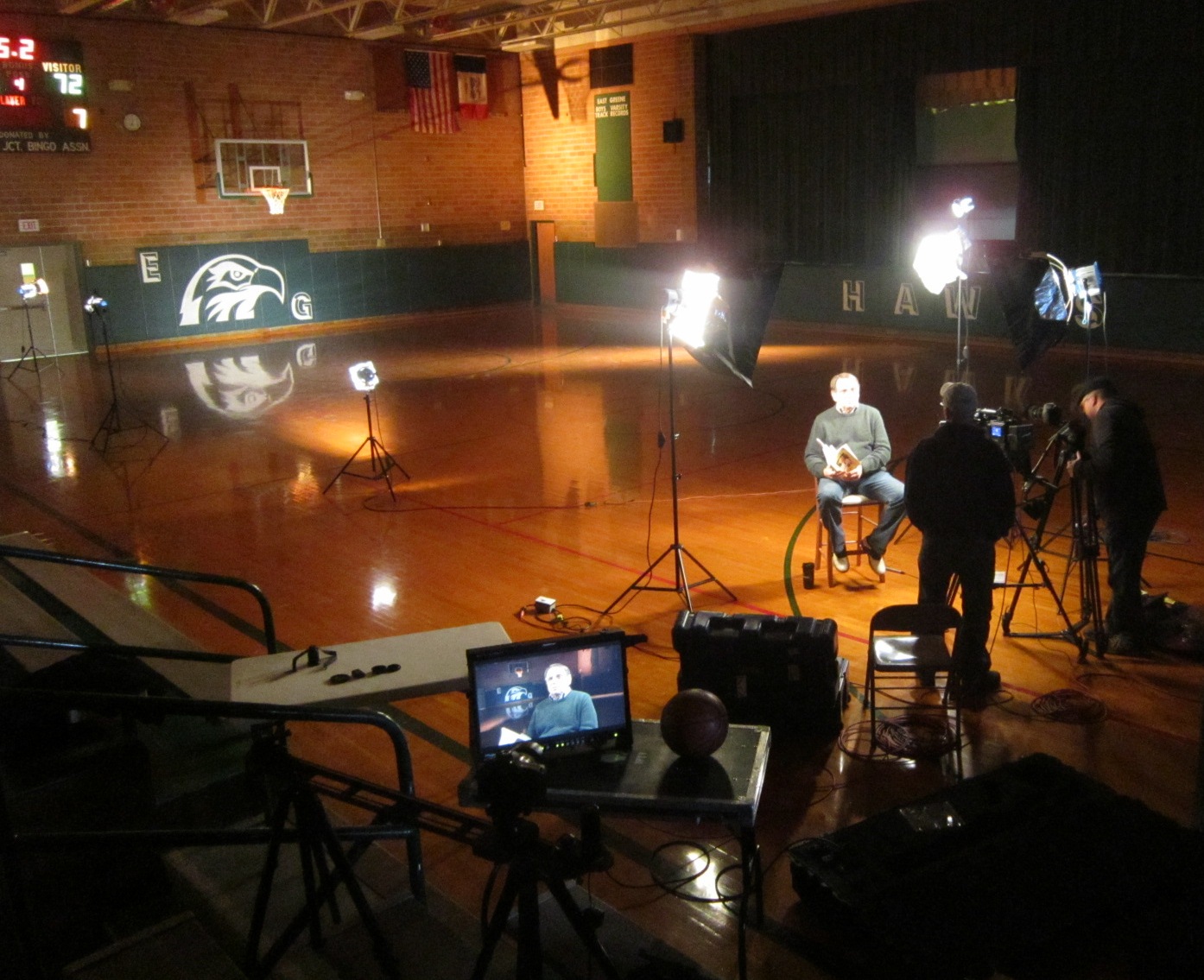 Chuck Offenburger, during videotaping of an Iowa Public Television interview about E. Wayne Cooley in the gymnasium at the former school in Rippey.


Cooley’s solution, he told me, was to go back to what he had learned at Coon Rapids High School before his graduation in 1939.

That was a school district which not only had a strong sports tradition but had perhaps an even stronger tradition in music, speech and drama.  He was involved in nearly all activities, of course; everybody was. In 1938, the Coon Rapids girls basketball team had a great season and qualified for the state tournament in Des Moines.  They were led by Helen “Tuffy” Parker, who eventually became a Hall of Famer. “Dad always said I was built like a brick outhouse,” she told the Coon Rapids Enterprise in a 1998 interview.  “I guess I had good stout legs under me, but I was quick.”

Cooley took it all in, helping to run a successful campaign among fans at Drake Fieldhouse to elect Tuffy Parker as tournament queen.  He never forgot how everybody in the Coon Rapids area seemed to go crazy during that tournament run, traveling to games in convoys of cars, attending pep rallies featuring the band and skits, having a great time.

Over about a 10-year period starting in ’55, he built the girls state basketball tournament into a macro version of what Coon Rapids had been back in February and March of 1938.  He started bringing in entertainment for halftime and between-game performances.  The first group he tapped was the Carroll Kuemper High School chorus.  He hired Des Moines TV producer Bob Scarpino as director of the basketball tournament’s entertainment and TV production.  Scarpino had theatrical experience, knew lighting and remembered an old theater maxim: “When you turn out the lights, people go bonkers!” So at key moments such as the National Anthem – which they had students singing – they would kill the arena lights and turn on powerful spotlights that would sweep the crowd and then focus on the performers.

They brought in drill teams, pep bands, jump rope teams and eventually celebrities like Olympic gold medalist Bruce Jenner and “Music Man” composer Meredith Willson.  Stars of the past were given lavish, formal inductions into the Hall of Fame, with the great Drake announcer Jim Duncan doing dramatic readings of the old stars’ accomplishments. They suited up handsome Des Moines high school boys in tuxedos, had them sweep the basketball floor under spotlights while the band played an old kick-line favorite, “Satin Doll.”

What Cooley and Scarpino knew, of course, was that for every student they put on the Vets Auditorium floor – whether as a basketball player, a musician, a rope jumper, whatever – there’d be parents, grandparents, uncles and aunts buying tickets.  Back home there’d be hundreds more friends watching on TV.  The more entertainment they could provide, along with good basketball, the more popular their tournament would be.

For the next 30 years, the Iowa girls state basketball tournament became a national sensation. At one point, the championship games were broadcasted on a network of stations reaching nine states.  Vets would sell-out all seats for those title games.  The coverage had a bigger TV audience in Iowa than any Super Bowl football game has ever achieved. There were stories in major media like the New York Times, Los Angeles Times, Sports Illustrated, all the TV network news shows and more. 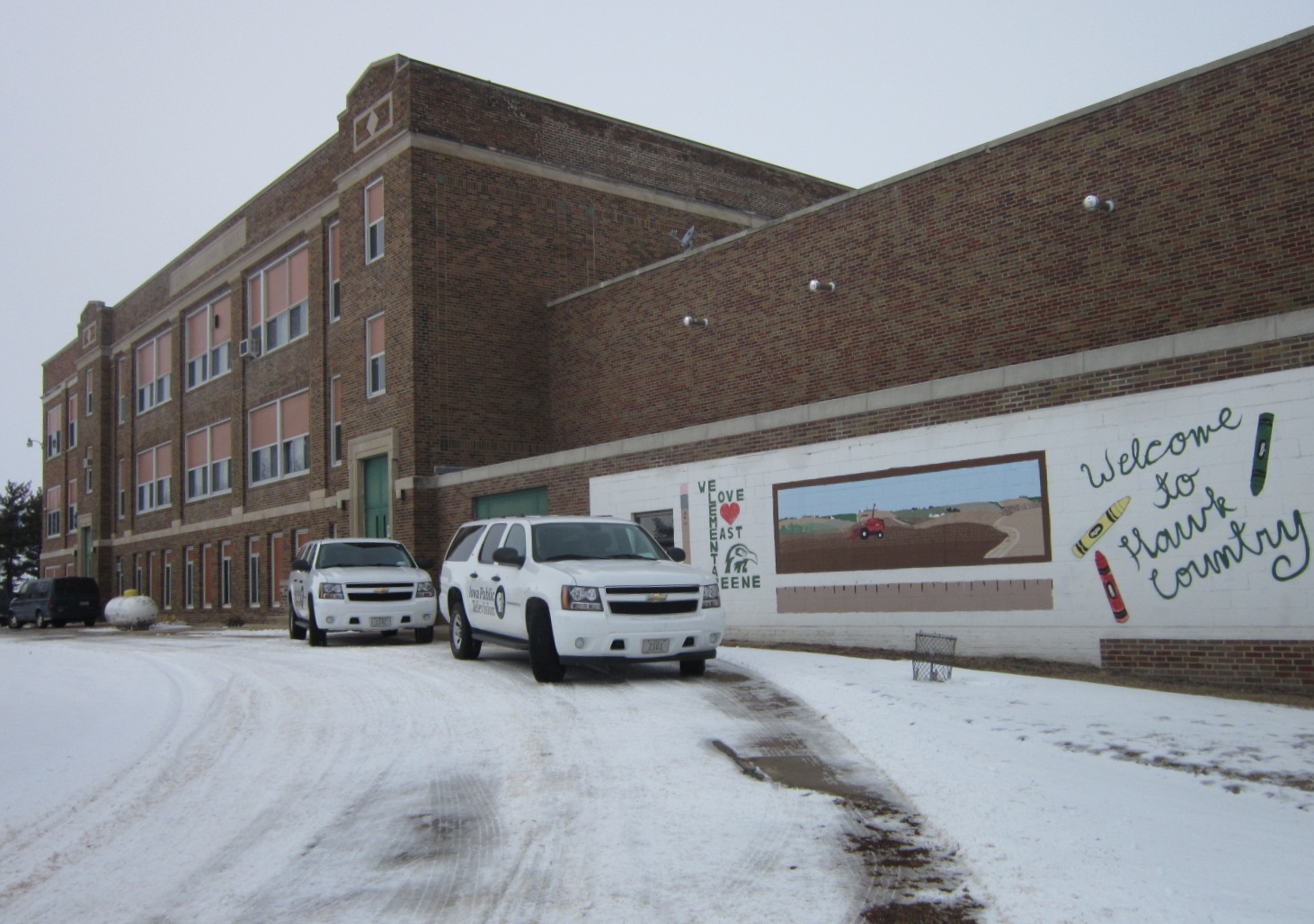 Iowa Public Television’s equipment vans outside the gym in Rippey.

The revenue poured in and Cooley began directing the steady expansion of the IGHSAU program to include nine sports for girls by the time he retired, and now 10.

I can’t think of anybody who created more opportunity for girls and women in this state than E. Wayne Cooley.

I wrote lots of columns in the Des Moines Register about him, the tournaments and Iowa girls.

In 1992, I asked him if he’d ever thought of himself as Iowa’s leading feminist.  “No,” he said curtly, blowing smoke from one of his frequent $3 “Te Amo” brand cigars.

“Oh, I might be a feminist, I just never thought of that before,” he said. “I have fought some battles over the years to get equality for girls.  When you think of it, the athletic arena was the home of men and boys for more than 200 years.  Only in recent times have women and girls started coming into athletics, and sometimes they’ve had to overcome hostility to do it.  In Iowa at least, the girl athlete can walk down the street just as tall as the boy athlete.  No taller, but no shorter, either.”

You can email the columnist at chuck@Offenburger.com or comment using the handy form below.

This story was first published in the Jefferson Herald of February 27, 2014, as a historical reflections column for the Greene County Historical Society. Chuck Offenburger is a member of the historical society’s board of directors.

6 thoughts on “OFFENBLOGGER: So how did girls sports become so big in Iowa?”