CARROLL, Iowa, Jan. 31, 2016 — Many Iowa Republicans — and I used to be one myself — have been waiting a good nine months wondering if Jeb Bush would ever really get his presidential campaign rolling here.  Darned if it didn’t happen in the final GOP candidates’ debate, held last Thursday night, Jan. 28, in Des Moines.  Front runner Do nald Trump had thrown a tantrum and was AWOL, giving Bush and the others time to talk for a change.  Most commentators said Bush for the first time seemed genuine, confident, impressive, even presidential.

I saw that same thing first-hand on Friday early afternoon, Jan. 29, when Bush made a campaign stop at “Greasewood Flats Ranch,”  a party & retreat center decorated like a western cowboy joint, located here in our neighboring town of Carroll.  The place was packed, maybe 200 people, many of whom had received invitations from the campaign organization of the former Florida governor.  Again, the 62-year-old Bush seemed genuine, confident, impressive and presidential.

Most of you know that I’m now officially a “No Party” voter, but that this cycle, I’ve already declared I’m caucusing in the Democratic Party for former Maryland governor Martin O’Malley.  But that doesn’t mean I haven’t been alarmed at what I’ve seen happening in the Republican Party.  My former fellow Republicans appear to be ready to use their caucuses to anoint the campaigns of  Trump, the New York tycoon, and Texas U.S. Senator Ted Cruz, who is already anointed by the petroleum industry.  And we all know that Iowa Gov. Terry Branstad says Cruz is a threat to Iowa’s bio-fuels industry, a foundational part of the state’s economy.

I think there are some other Republican candidates who might be able to win the general election and who seem capable of governing the nation.  The one most likely to be able to do both is Jeb Bush, despite the fact that he is at only two percent in that latest Iowa Poll.

If I were a Republican, I’d be casting a vote for Bush in the caucus tomorrow night. 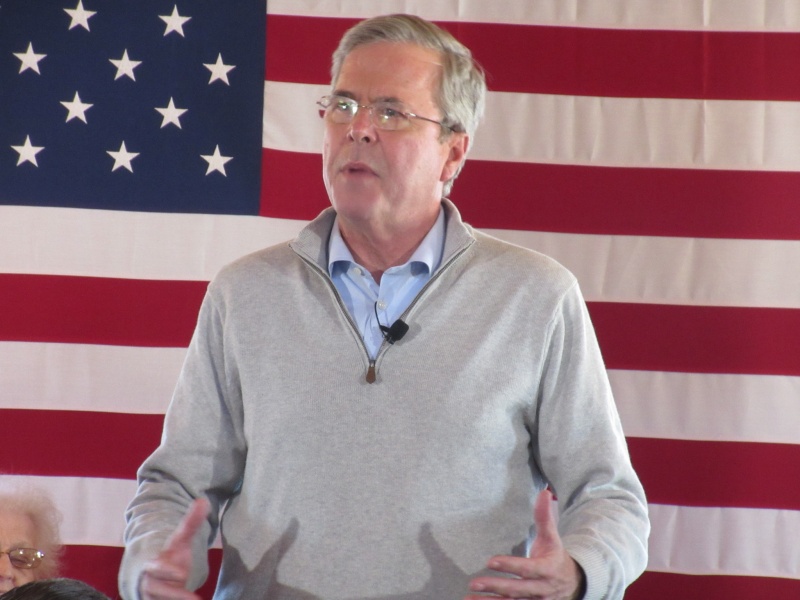 He’s got the education, experience, demeanor, spirituality and sensitivity for the job.  I mean, that can’t be much of a surprise to anybody — he’s a Bush.  You can argue about their politics, but there can be no argument that the Bushes are outstanding  Americans who have served our country with great devotion, even if they’ve made some mistakes.

Why do I say that? I heard all that come out on Friday afternoon here after I raised my hand and asked Bush this question: “In Iowa, we know the Bushes well.  How would you say you are most similar to your father and brother, whom we came to know and many of us voted for?  How are you most similar to them and how are you different from them?”

Jeb Bush’s long, rambling (you know the Bushes) answer went on for several minutes.  But it impressed me and it clearly moved the crowd.

You can listen to it here, courtesy of Douglas Burns of the Carroll Daily Times Herald and Jefferson Herald: 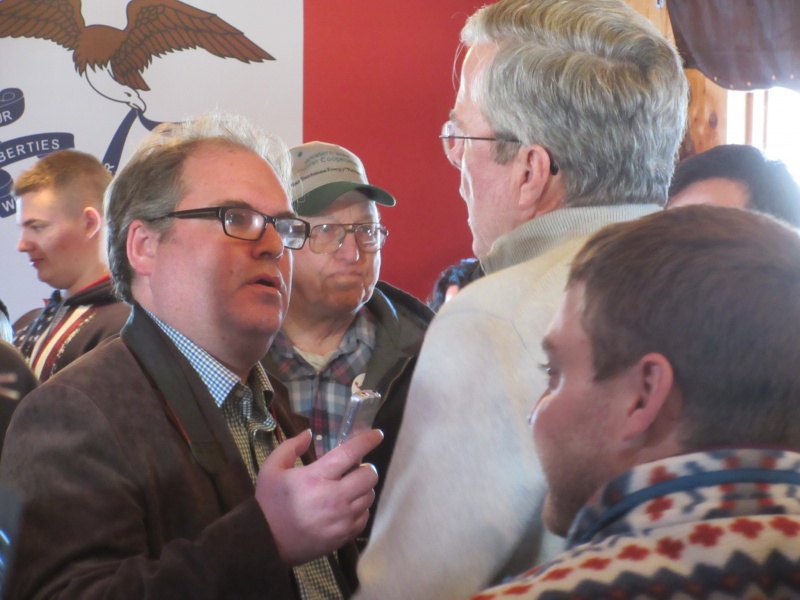 Douglas Burns of the Carroll and Jefferson newspapers interviews Jeb Bush after the candidate’s campaign stop in Carroll.

“Wow,” he began. “Well, I’m much better looking than my brother,” former President George W. Bush. who served from 2001 until early 2009.  That line that set off a big round of laughter.

“…when I was in my mid 20s, the two things that really transformed my life, made my life, is marrying my wife. I met her when I was 17 in Mexico and it was love at first site. And my life can be divided between ‘BC’ and ‘AC’ – that’s ‘before Columba’ and ‘after Columba.’  And I’ve been much better ‘after Columba.’ I got out of school in two years, and I’ve worked. And she’s been my inspiration and my motivation. The other motivation has been my dad.,” former President George H.W. Bush, who served from 1989 until early 1993.

“He is 91.  He is near perfect in my mind. How can I compare myself to the person whom I consider to be my hero and the greatest person alive? I may get emotional about this,” and he began to choke up, which brought more applause.  “How do I compare myself to a guy who joined the Navy, was the youngest Navy pilot in World War II history, got his wings when he was 19, was shot down in the Pacific, and barely escaped being picked up by the garrison at Chichi Jima island.  Had he been picked up, he would have been in a war camp where the commander of that camp was executed for war crimes for cannibalism, with prisoners,” and the crowd gasped.

“I mean, my dad’s life experience is so full, so rich, so big,” Jeb Bush continued. “When I was in my 20s, you know, normally we have a father that you just idolize.  (And his father) had this success, never cursed, never raised his hand to me, just perfect.

“I figured, you know what? Normally you try to get to be like your father. You know?  If I could just be like him? I figured, if I could be just like half of him? It was a perfect decision on my part because that lower expectation allowed me to live my own life.” 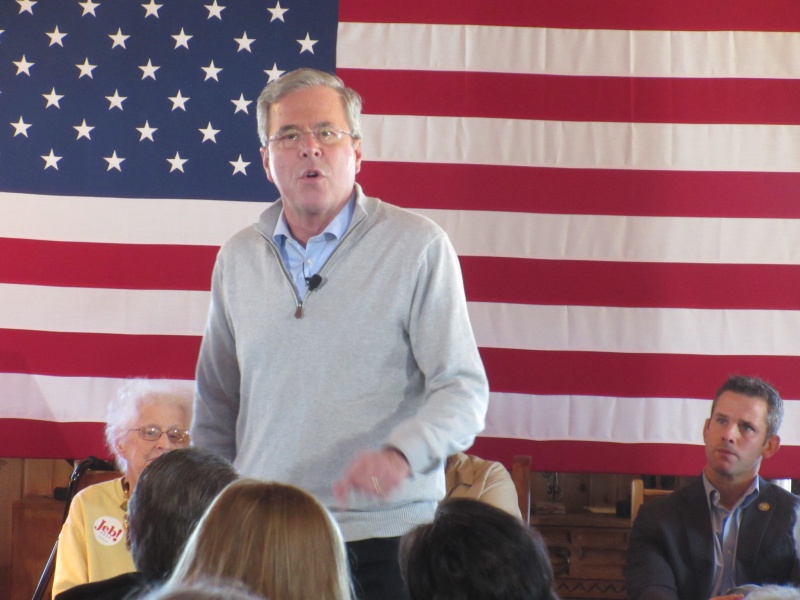 Jeb Bush, speaking in Carroll, connected well with the crowd.  Two of his three grown children were with him, daughter Noelle, 38, and son Jeb Jr., 32.  Oldest son George P. Bush is 39. The Bushes are all fluently bilingual.

“And my life is different,” he continued. “I married a girl from Leon, Guanajuato, Mexico.  I moved to Florida, away from Texas.  I’ve worked my entire (life).  I mean, we started having children when we were young. I got married when I was 21. I lived in Venezuela.

“I’ve lived a very different life than my brother, and my life experiences are, I’m not saying they’re better or worse, they’re different.  And we’re different because of that.

“He’s more disciplined, more focused. I’m probably a little more cerebral, which I’m trying to work on, got a little therapy on that,” and there was laughter.

“I don’t want to become overly wonkish here. But I love ideas. I love policy.”

Another difference, “I look like my mother, he looks like his dad. I don’t know what else. I mean, I admire George’s fortitude, his dogged determination when we were under attack. And to me that was inspiring, the fact that he went against popular will to create ‘The Surge,’ along with extraordinary group of men and women in uniform that left Iraq, with mistakes made along the way, but they left Iraq in a secure place, fragile but secure, and it was because his was dogged determination to finish what was started. And I admire that as well.

“And I’ve learned just by having a front row seat, watching them work. And the final thing I’d say is, look, 2017 is going to be a lot different than 1989,” when his father became president. 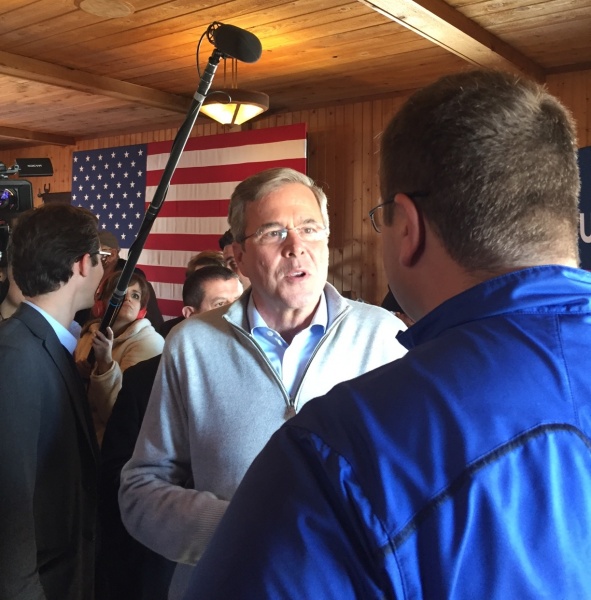 Jeb Bush spent time talking with everyone who stepped up after his appearance in Carroll.  (Photo by Kathleen Parris)

“Every election, every circumstance is different, right?” Bush continued. “The context is always different. But we can always learn from the lessons of history. And we can learn from successes.

“My best lessons for me personally have been the ones where it didn’t work, where I didn’t succeed, where I had to dust myself off, where I made a mistake. Isn’t that how life works for you all? If you’ve lived a life where you’ve learned through trial and error, through living a life, through being active, being engaged, you’re a lot better on that journey by taking the time to listen to yourself and to challenge yourself along the way.

“I think you want a president that actually has had a little adversity in their life as well, a fuller deeper understanding of how people are challenged today, and I think I’m your guy in that regard. So I don’t know if that’s different, the same,” he paused, then wrapped up, “I’m Jeb.  I’m Jeb, exclamation point,” chuckling at his own campaign’s logo, which is “Jeb!”

Yes, that’s long. It’s rambling.  But there is a whole lot of honest goodness in it.