COOPER, Iowa, June 10, 2015 — When the Shenandoah High School Class of 2015 graduated on Sunday afternoon, May 24, it was a big moment for all 72 of them.  It was a big moment for me, too.  It marked 50 years since I graduated from dear ol’ SHS there in my hometown in southwest Iowa.  I’m kind of ashamed that I really only know one student in this 2015 class at my alma mater — Devon Wood — but heck, I’ve lived away for 43 years.

So I wrote Devon a note of congratulations on Facebook, and asked if she was game for an unusual conversation.  She enthusiastically was, and we had a fun phone chat on a recent morning.  We carried on for a delightful 45 minutes.

“Devon,” I said to her, “your Shenandoah High graduation this spring means it’s been 50 years since I graduated in 1965.  I’d like to write a reflection about graduating 50 years ago, but I think it’ll be a lot better story if I get you involved in it.

From the time five years ago when I first met Devon Wood, I’ve known she’s a smart cookie.  She was in 8th grade then, and her “Talented & Gifted” teacher Kelly Gee Carey, an old friend of mine, asked if I’d let Devon interview me on a day I was already going to be in Shenandoah.  She was working on a video documentary on Shenandoah’s most famous sons, the Everly Brothers of rock ‘n’ roll fame, and she wanted to hear my stories about them.  We’ve talked two or three times since then, when we’ve run into each other again.

Devon graduated with academic honors, ranked 16th in her class, after an outstanding high school career. She was involved in lots of extracurricular activities, including Future Farmers of America and an innovative “PBS” class in which she and a small group of other students have been coached and mentored in video reporting and production by staff members of the PBS News Hour on public television.  She spent the second semester of her senior year serving as a page in the Iowa legislature in Des Moines, working directly for the Chief Clerk of the House of Representatives.  She is a good pitcher in softball, and when she’s not pitching, she plays in any other position where her Fillies team needs her.  She’s all set to enroll late in the summer at Central College in Pella, where she intends to major in political science and play softball, if she can work the sport into her academic schedule.  She also hopes to work as a clerk for a state legislator. 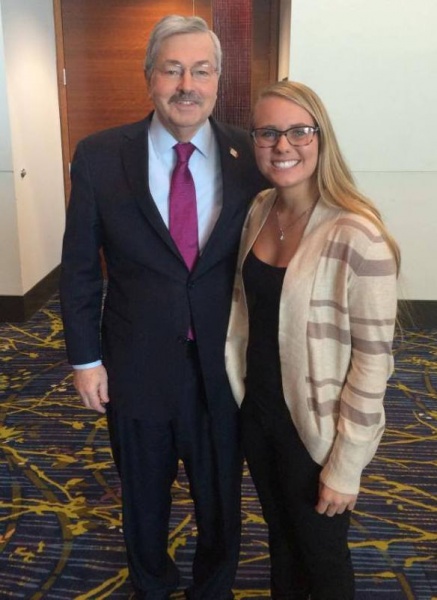 When Devon Wood served as a page in the Iowa legislature during the second semester of her senior year at Shenandoah High School, she met another fellow who graduated from high school in 1965 — Governor Terry Branstad, an alumnus of Forest City High School.  This photo was taken in January, 2015, on the day of Branstad’s inauguration for a sixth term.

So here we go, I said to her, how do you think your life is different now from the way mine was back in 1965?

“Well, I don’t think you were sending any texts or posting on Facebook, like we are now,” Devon said with a snicker.  “Obviously, technology has come a long, long ways.”

It was even more dramatically different than she can imagine, I told her, adding that I remember back before dial telephone service came to Shenandoah.

Yes,  I told my young friend Devon, I still remember a lot of those old numbers.  I’m pretty sure she realized I was not making that up.

Actually, we in the Class of 1965 thought — most of us still do — that we were in high school and graduating during Shenandoah’s heyday, or at least one of its heydays.  The hometown had a population of about 7,000, compared to today’s 5,100.  We were in the front wave of the Baby Boomers.  Our class, which started high school with about 160, graduated with 146, the biggest SHS class ever.  “And best,” we’ve always added — to the hoots from our friends just older and younger.

There were so many of us that every time we started a new level of school, they had to build a new building for us, or at least a new addition.  Our parents, teachers, coaches and community had high expectations for us, and we had high ones, too.

Memories of World War II and the Korean War were still fresh and often painful in our parents’ minds.  We were the first generation produced in peacetime.  We hoped to build on the tranquility and economic expansion of the later 1950s and early ’60s.  We thought we were well on the way to racial equality and harmony.

Alas, we were clueless about what the next 50 years of adult life would bring us, or what we would help make happen.  Let’s see, on the positive side, there’s been women’s liberation and a continuing sexual revolution.  On the negative side, there was the worst economic bust in the Farm Belt since the 1930s.

We’ve allowed legalized abortion to decimate the generations of our children and grandchildren.

We’ve participated or witnessed three or four more wars, depending on how you count them.

Oh, we’ve been on the front wave of a lot of other good, too — the amazing communications advances that Devon referred to earlier, a fantastic increase in farm productivity, tremendous medical breakthroughs (making it possible for me to be sitting here writing this column, in fact), we’ve invented more labor-saving gizmos than we can count, we’ve enjoyed the development of all kinds of recreation & leisure opportunities, and travel has become incredibly quick & convenient.

But on balance, I doubt we’ve really measured up to the bold predictions that were made about us back in 1965.  Maybe that’s the feeling all generations have when they reach their mid to late 60s, appreciating the successes but also being honest about the failures.

So how does Devon Wood assess things for the Class of 2015 right after high school graduation?

“First, I think Shenandoah High School has been a very interesting place during our years here,” she said. “There have been a whole lot of improvements in our education program, in our sports program and in our other extracurricular programs, too.  I took a large variety of courses and a lot of electives, and I learned a lot.  I really enjoyed our science programs.  Our English program is excellent — you can really find yourself as a writer now while you’re in high school here.  The vocational programs like ag, metals, shop are really good, too.

“So I think we’ve been well-prepared.  But when you look ahead, you realize it’s such a big world out there, and you’re stepping out into it from a small town, so that can be a little scary.  But at the same time, my classmates may know more about that world than you did in 1965.  With communications being what they are, we’re constantly aware of what is happening nationally and globally.”

She said she thinks her generation is “pretty hopeful” about the future.   Right now, she thinks she wants eventually to go into politics and help shape that future.

“You know, when you grow up in a small town, especially in a rural place like the Midwest, you are very close to nature and you can see the world’s beauty,” Devon said. “I think that gives you hope.  Of course, we’re kind of protected growing up here, but that’s not a bad thing, it’s a good thing.  We’ve had a good support system. We’ve grown up in a loving, nurturing small community.  The people here know your name, they want you to succeed, and they’re going to be proud of you no matter where you are out there.”

What does she think life will be like in 2065 when, hopefully, she will be attending her 50-year high school reunion?

“That’s not something that I had even thought about until you asked me,” she said.  Of course. When you are graduating from high school you aren’t thinking 50 years ahead.

“Will I even be able to recognize my classmates then?” she said. “I’m guessing that if I look in their faces, I will probably remember them, so maybe they’ll look kind of the same but in a bigger body.  I’ll be excited to see them, I’m sure of that, and talk about what we’ve accomplished.

“It’s almost hard to fathom about all the technology that will have come and changed through our lives.  Even right now, it’s hard to fathom how it changes in just five years.  In 50 years, it’ll be crazy.  But I somehow think Shenandoah will still seem like a little pocket of calm, with the world rushing all around it all the time.”

And what does she think the students in the Shenandoah High School Class of 2065 will be like?

Devon Wood right there probably hit upon the biggest similarity of the SHS Classes of 1965 and 2015, all those classes between us, and the ones in the future, too.

By the way, she said she is taking an idea away from our unusual conversation.

“I’m thinking 50 years from now, I want to interview a Shenandoah High School graduate in that class, and ask these same kind of questions,” Devon said. “We can make it our tradition.”