CENTERVILLE, Tenn., April 14, 2014 — Everyone needs a Gene Sand in their life. Every town needs a Gene Sand in its midst. Every college needs a supporter like Gene Sand. So it was that I, the city of Dubuque and Loras College had not just someone like him, but the real authentic deal: Gene Sand, who died at 83 years old on March 24, under the tender ministries of his dear Margy Becker, surrounded by Dubuquers whom he continued to greet and entertain until the very last.

Now, I live far away from Dubuque and Loras, and I only saw Gene infrequently.  Yet his passing brought a cloud over my heart, even as I thought of all the joy he had brought me. I sit in my office over the square in Centerville, Tennessee, now on a Monday morning with much to do but, as I do every day, think lovingly of Dubuque and her environs and her denizens whom I love so much. Mainly, however, I think of Gene.

Like all of my Iowa friends, Gene was a gift from Chuck Offenburger. Like them all, I met Gene under the glow of his joy at being in the presence of the “Iowa Boy,” and indeed, the last time Gene and I spoke on the phone, he thought I was Chuck.

I first came under the spell of the magic of Sand at the National Catholic Basketball Tournament, the first time Chuck and I wallowed in that spectacular mid-winter festival of small, Catholic college basketball, years ago. The four of us, Chuck, me, Gene and his girlfriend Margy watched a score of games together, and Margy hosted a breakfast at her home the Sunday of the finals. In truth, it was during that week when Dubuque became for me what the briar patch was for Br’er Rabbit — it was my “laughing place.” 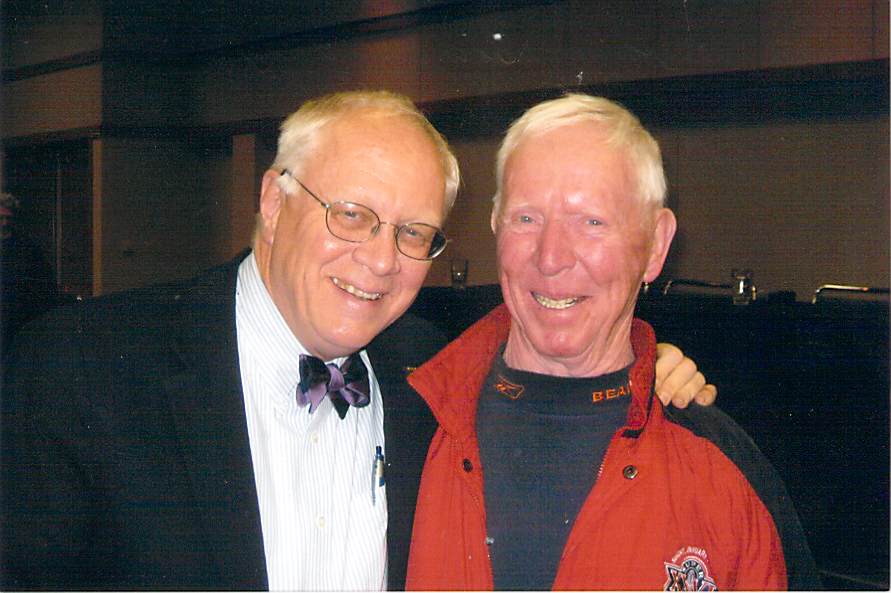 Douglas T. Bates III (left), of Centerville, Tenn., and Dubuque’s Gene Sand on one of their last visits.

So generally annually, often with my wife Molly in tow, I would allow the Br’er Bears of this world to fling me into Dubuque where I would, well, laugh and love for a few days. In time there were many kind hearts and gentle people whom I grew to love there, but none more than Gene, and no one captured whatever it was I loved so about that place on the banks of the youthful Mississippi as did Gene Sand.

My visits there always included a trip to New Melleray Abbey, the Trappist monastery, to see Father Jim O’Connor; a few classes at Loras; some “spirits” with philosophy professor Roman Ciapalo; breakfast with poet and grant writer Valorie Woerdehoff; a visit with President Jim Collins; lunch with all my friends, and homemade molasses pie in the Rampson family kitchen.

But the visits always started the same way — at Sand’s Barber Shop at 1516 Central Avenue for a haircut. Gene was an excellent barber and his shop was an icon of Americana.  But it was his presence, his mere but giant presence, which was the treat. I would tarry in his empty chair and visit with his old friends who came by.  Like Gene, they were robust and generous men of the Midwest, and we would all laugh — for that is what you do in your “laughing place.”

But mainly I think now of his unconditional and uncompromising loyalty to that little school up the hill on Alta Vista Street. If Loras students were pitching quarters, Gene would have been rooting for them. I would like to think that the urbane-thinking and deep spirituality of the Loras community of scholars are what drew me to Loras; but probably it was Gene’s love of those Duhawks that I could not resist.

However, a small but telling moment comes to mind, as I remember Gene.  I had heard Gene often make good-natured but snide remarks about the University of Dubuque.  But I also once heard him remark with pride about something UD was doing. I came to know, that if someone or something was in Dubuque, then it was surrounded by, and the beneficiary of, Gene’s spirit.

And so his spirit lives on. It was as large as his thunderous voice, his sparkling eyes, his charming stutter.

I hate that I could not be there to say a formal goodbye to him.  But in some ways, if I could have come to his funeral mass, or when I do return to Dubuque, it will be yet another “hello” to Gene Sand.  He was a giant of a man who filled every crevice of Dubuque, and when you were in his presence, every crevice of your heart. A man like that never, ever dies.

You can contact the writer by email at dtbatese3@bellsouth.net or by using the handy form below here.