OMAHA, Neb., Dec. 17, 2022 — One of the extended Offenburger family’s greatest successes, my first cousin Dr. Richard O’Brien, and his wife, soulmate and perfect partner for 65 years, Joan O’Brien, were both memorialized Thursday morning at St. John’s Catholic Church in the heart of the campus of Creighton University, their alma mater.

After long, full, meaningful lives full of service, culture, exploration and fun, they both died in their upper 80s recently — Dick last May and Joan in late November. Because they knew their deaths were clearly imminent, they had decided the family should wait until both were gone to hold a service.

Because a winter snowstorm was bearing down on Omaha on Thursday, only about 50 of us were able to gather in beautiful and huge St. John’s. Creighton U’s students had finished their semester exams days earlier and most were home for the holidays, so the normally bustling campus was almost eerily quiet. Perfect for a funeral, actually.

The funeral card from the service for Dick and Joan O’Brien.

Both O’Briens need to be remembered, by more than just their four grown children and their families, who live all over the western U.S. and Canada, and the rest of us in the extended Offenburger clan.

Dick and his younger brother Mike O’Brien, born in our hometown of Shenandoah in southwest Iowa, came from a very poor immediate family. They were deserted as young boys by their ne’er-do-well father, and raised by their heroic mother, Grace Sims O’Brien, and eventually her second husband, career Navy man Glenn Parrish.

From that humble start, Dick excelled in school and was valedictorian of his Shenandoah High School Class of 1952. He became the first in our family to attend Creighton University, and about a dozen others of us in three generations followed him there.

He graduated with both a master’s and medical degrees. He went on to become a top cancer researcher and administrator in the medical school at the University of Southern California, and then from 1982 until his retirement as Creighton’s dean of the med school, vice-president of health sciences and founder of the Center for Health Policy and Ethics.

Joan was born in Sioux City, grew up in Fremont, Neb., went to work as a dental assistant and then graduated from nursing school.

I can’t portray her better than this paragraph in her obituary, written by a daughter: “Those who spent time with Joan will remember a life characterized by color, creativity and music. She was enthusiastic about creating beauty, and the evidence abounded in her lush, diverse gardens, generous parties, and the homes she redecorated step by thoughtful step. The background to all this creativity was an endless musical soundtrack: a beloved opera, a symphony, or even a 1940s pop tune sung in Joan’s own beautiful voice.” And add this: “To spend time with Joan was to laugh. She had a wickedly quick and clever wit, and if someone missed the tip-off, they only needed to look at the glint in her eye as she waited for them to catch up.”

Meanwhile, Dick’s brother Mike graduated from high school in Hawaii, where his stepfather had led them on a Navy assignment. He went on to the University of Northern Iowa, taught and coached at the high school level, settling in Boone in central Iowa.

I think you can now understand why we’ve always considered the O’Brien brothers as MVPs of our big family.

But for all their notable accomplishments, I’m going to remember the O’Briens for three little capers that I’ve admired most.

For Mike, it was his rhyming campaign slogan to become president of his high school’s student body in Hawaii: “Vote for O’Brien/ the Irish Hawaiian!” You could tell with that start the guy was going to become a political success.

—Let’s start later in his life. With all Dick’s academic and professional accomplishments, none of the rest of us in the big family could really measure up. And we’d all kid the heck out of him, moaning and sneering how “nobody’s as perfect as Dick the Doctor!” Yet he didn’t hang up on any of us when we’d call for medical advice. We admired him then as “Doctor Free.”

—When Dick was 13 years old in 1947, he was an excited young fan of the old Brooklyn Dodgers and their dashing rookie Jackie Robinson, who was breaking Major League Baseball’s color line. Dick’s first cousin and best friend then, my brother Tom Offenburger, also 13, was an equally excited fan of the St. Louis Cardinals. They somehow convinced their parents to allow them to go, unescorted, to a series of Dodgers-at-Cardinals game — riding a Wabash train from Shenandoah to St. Louis and back, and staying unattended in a St. Louis hotel room. (They actually blazed a trail, so that in 1959, when I was 12 and my older, more worldly pal Eddie Nichols, 13, got parental permission to repeat that baseball adventure to St. Louis, including train rides and hotel stays. What were our folks thinking?)

—Finally, there was one of his few failures in life. It came in his early years as a doctor and husband. Always a music lover, he decided one Christmas season he was going to try to write the next great carol, which he imagined producing critical acclaim and financial rewards. Actually, he worked several holiday seasons on this. One time, after working into the wee hours on it, he thought he had the great new song. Coffee-logged and bleary-eyed when Joan woke up in the morning, he hummed the melody and sang his lyrics for her. Well? “Uh, Dick,” she said, “you’ve ‘created’ a tune that’s already pretty well known — ‘Silent Night!’ ” In his late years, he told me he still had the masterpiece stuffed in a drawer somewhere.

Ah, the O’Briens! I wish you all had known them. 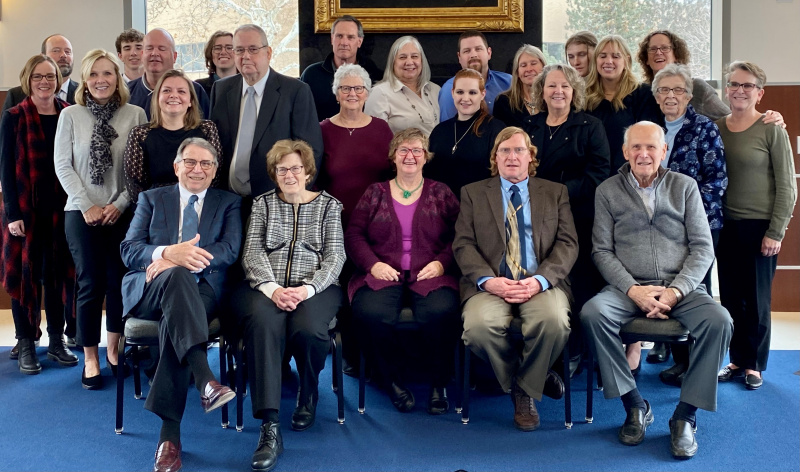 The O’Brien clan at the reception following the funeral.  (Photo by Mary Riche)

You can comment on this column below here, or write the columnist directly by email at chuck@offenburger.com.

One thought on “Dick and Mike O’Brien, my first cousins, were among our big family’s very best.”