COOPER, Iowa, July 11, 2014 – For somebody in my business, I guess the very definition of “retirement” would be that your college alma mater wins a national championship in your favorite sport, but you don’t get anything written about it until two weeks later.

So, to you Coach Tim Corbin and the Vanderbilt Commodores of 2014, thank you and congratulations on all the thrills you gave us enroute to the College World Series baseball championship in Omaha.  That 3-2 victory over mighty Virginia in the championship game on June 25 was so tense that, days later, I was still wondering if I should seek treatment.

John Norwood, a junior from New Jersey, won it with a dramatic eighth inning home run that gave us the one-run lead.  I swear, I nearly jumped out of the upper deck at Omaha’s TD Ameritrade Park.

The best way I’ve found to describe the significance of Norwood’s blast is this – it was the biggest hit by a Vanderbilt person since 1957 when our Dinah Shore (VU ’38) sang, “See the U.S.A. in your Chevrolet, America is asking you to call.  Drive your Chevrolet through the U.S.A., America’s the greatest land of all!”

It was a huge deal, our little school winning our first NCAA championship in a men’s sport. 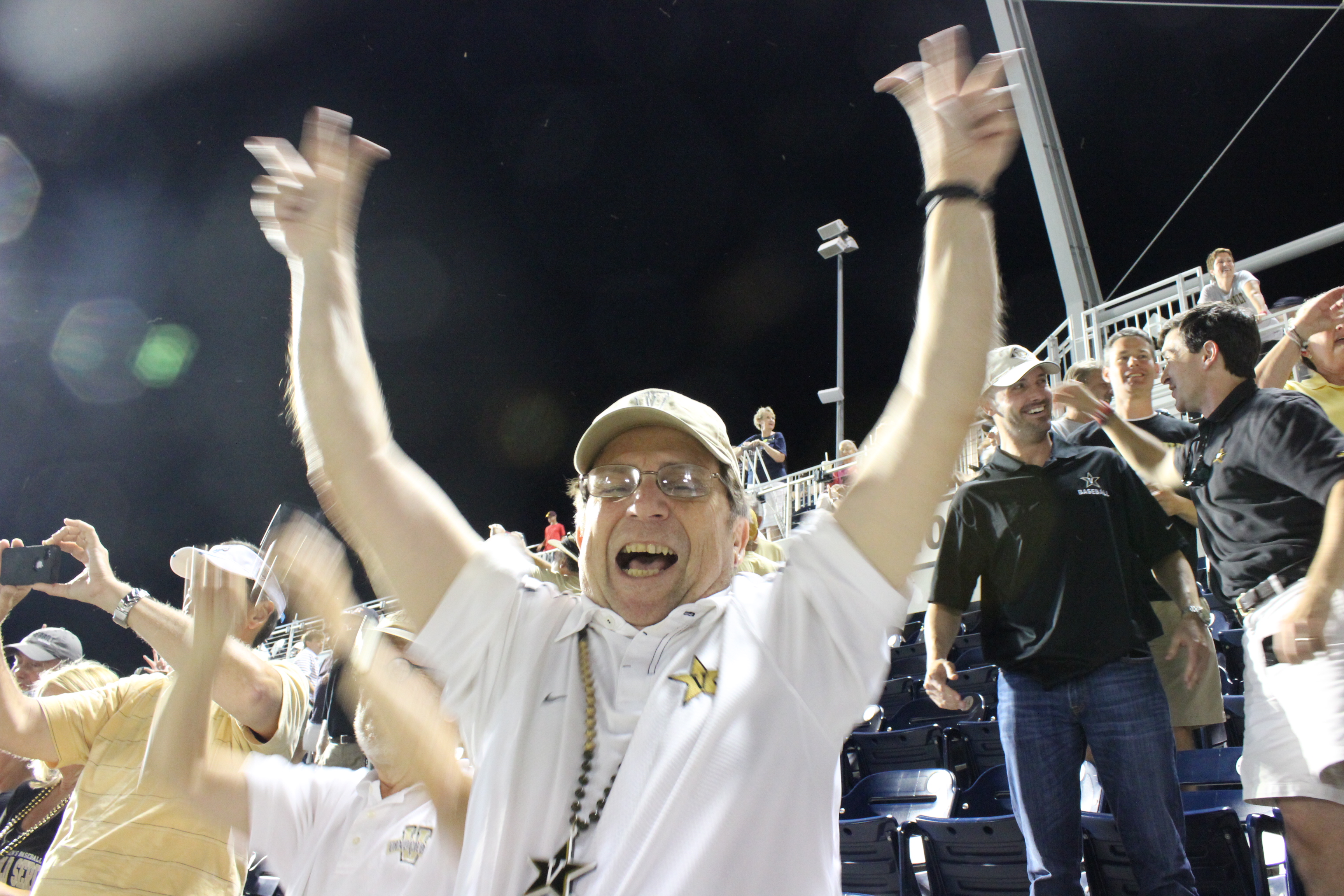 Our columnist was caught on camera by his wife Carla Offenburger right after his alma mater Vanderbilt won the College World Series in Omaha.

Vanderbilt is the smallest and only private school in the powerful Southeastern Conference.  For more than 50 years we have been used to beat-downs in most sports from the goliaths at Alabama, Florida, Georgia, Kentucky, the Mississippis, Arkansas, South Carolina, LSU.  And, how could I forget, Tennessee.

But now Coach Corbin and his lads have traveled the famous “Road to Omaha,” they shocked nearly everybody by winning the title, and are now showing off the big trophy at appearances all around Nashville and the rest of the place formerly known as the Volunteer State.  Please, at least for now, it is the Commodore State.

Yes, a huge deal.  Just maybe not as huge as the Offenburger granddaughters Lindsay, 7, and Casey, 3, coming to the farm the day after the championship and staying for the next 10 days. We had a great time, and of course I didn’t lose all perspective.  When the girls went up the escalator at the Des Moines International Airport to fly back home to Connecticut, they stopped at the top, turned around and flashed the “VU” hand sign (thumb and first two fingers), and invoking Vandy’s big cheer nowadays, they yelled, “Anchor down, Grandpa!”

My regular readers know that I’m more inclined toward the classic Vandy cheer from my heyday in the late 1960s, when we’d chant, “Yeaaaaaay RAH! Whole damned team!”

I’ve screamed both cheers a whole lot this spring and summer, especially during the seven games we saw in Omaha.  And I led the singing of our fight song “Dynamite” by a chorus of a half-dozen hoarse fans after we eliminated Texas enroute to the CWS championship series.

Of course, this championship belongs to the players and coaches.  But they’ve made it clear from their first comments after the celebratory dog pile near the pitcher’s mound, that they want to share it with their whole university, all us alumni, the city of Nashville, the state and beyond.

Carla Offenburger and I both felt a strong attachment to this team.  We buy an all-access package from Vanderbilt so that we can listen to an Internet stream of the game broadcasts.  We figure that of the 72 games this season, we listened, watched or attended about 50 of them.  We became familiar enough, with our tweets and emails to broadcasters Joe Fisher and Eric Jones, that it was common for one of them to say during the game, “Well, the Offenburgers are listening again from their farmhouse up in Cooper, Iowa.”

What the heck, there were also regular listeners in Shanghai and London, so why not Cooper? 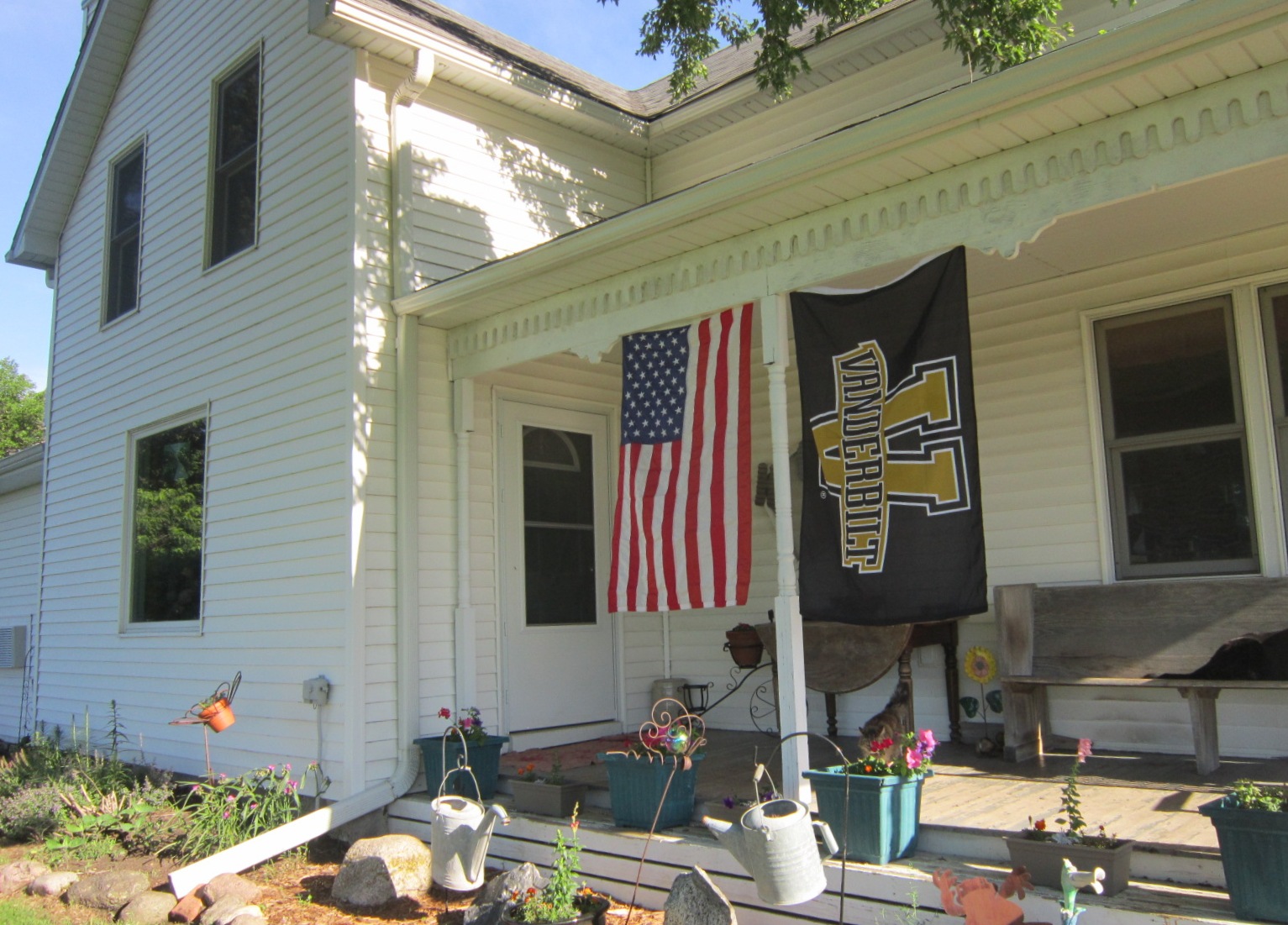 Flags were flying at the Offenburgers’ farmhouse in west central Iowa.

We drove to Columbia, Missouri, for Vandy’s weekend series sweep of the University of Missouri Tigers.  I swear we saw an extra spark in those three victories, and I did begin to wonder.  Also there, Coach Corbin counted his 500th victory as Vandy’s head coach.  No doubt, we’ve got one of America’s best baseball skippers.  (And you jealous big schools, and professional teams, don’t even be thinking about it.)

There are a lot of things I’ll never forget about this championship run by our Vanderbilt baseball team.

Well, we had Vandy friends flying to Omaha from across the nation for the games.  A couple of them stayed with us at the farm and made the two-hour drives to and from the games.  A bunch of others drove out on an idle Sunday afternoon for a farm picnic and a visit to the working farm of our neighbors, Doug and Karen Lawton.  We all realized how precious these times are when we can spend a few hours together, for whatever reason.  And it’s especially fun when you gather and your team wins big!

Another memory, Carla and I couldn’t believe how many people around our home area of Jefferson and Greene County were stopping us, flashing “V” signs and saying “Go, Vandy!”

Then there was my former priest, Father Dave Polich, now serving Osceola, Iowa, calling me on my cell phone as I was driving into Omaha for the final game.  “Just thinking of you and wishing Vanderbilt well,” said Father Dave, who is a mega-fan of baseball.  In the bottom of the 8th inning, when we had the one-run lead and Virginia had the bases full, I nearly called him back to to ask for prayers.

The best moment for me was about 12:30 a.m., that’s the wee hours June 26, about two hours after the championship game ended.  It was way too late for a senior citizen from Cooper, Iowa, still to be whooping it up on the streets of downtown Omaha, especially when we had the two-hour drive home facing us.  Nevertheless, a small group of us walked from the stadium up to the Doubletree Hotel by Hilton, where the Vanderbilt team was staying.  There among about 30 fans waiting for the team bus to arrive, I met a legendary Vanderbilt figure.  He is physics professor Joseph Hamilton, now in his early 80s although he looks my age, who just completed his 56th year at our university.  He is internationally known for his co-discovery of new elements on the “Periodic Table of the Elements.” But he has always loved baseball, too, Hamilton explained; he’s had some of the boys on this team in his classes, and he wanted to add his congratulations on their biggest victory ever.

That was one of those moments that tells you a lot about athletics at Vanderbilt.

Finally, there was my heartfelt text to my lifetime best friend, my Vandy classmate Douglas T. Bates III, now a lawyer in Centerville, Tenn.

He is the epitome, or maybe the caricature, of the long-suffering Vandy fan.  He is always telling how his first sports memory may be listening on a bedroom radio with his older sister Anne as Tennessee put another whipping on a fine Vanderbilt football team late on a Saturday night back in the mid-1950s – “and I cried.”  He’s cried a lot since then, too, but he has remained a Vandy fan all his life, even though he is often grumpy about it.

Bates could not be in Omaha, due to family obligations, but he arranged for the six tickets that a bunch of the rest of us enjoyed. And he was watching on TV in Virginia, of all places, when Vanderbilt’s glory erupted in Omaha, just like the fireworks above the ball park.

“It’s happened!” I texted to Bates from the upper deck. “Vanderbilt has won a national championship, and it happened in our lifetime!” 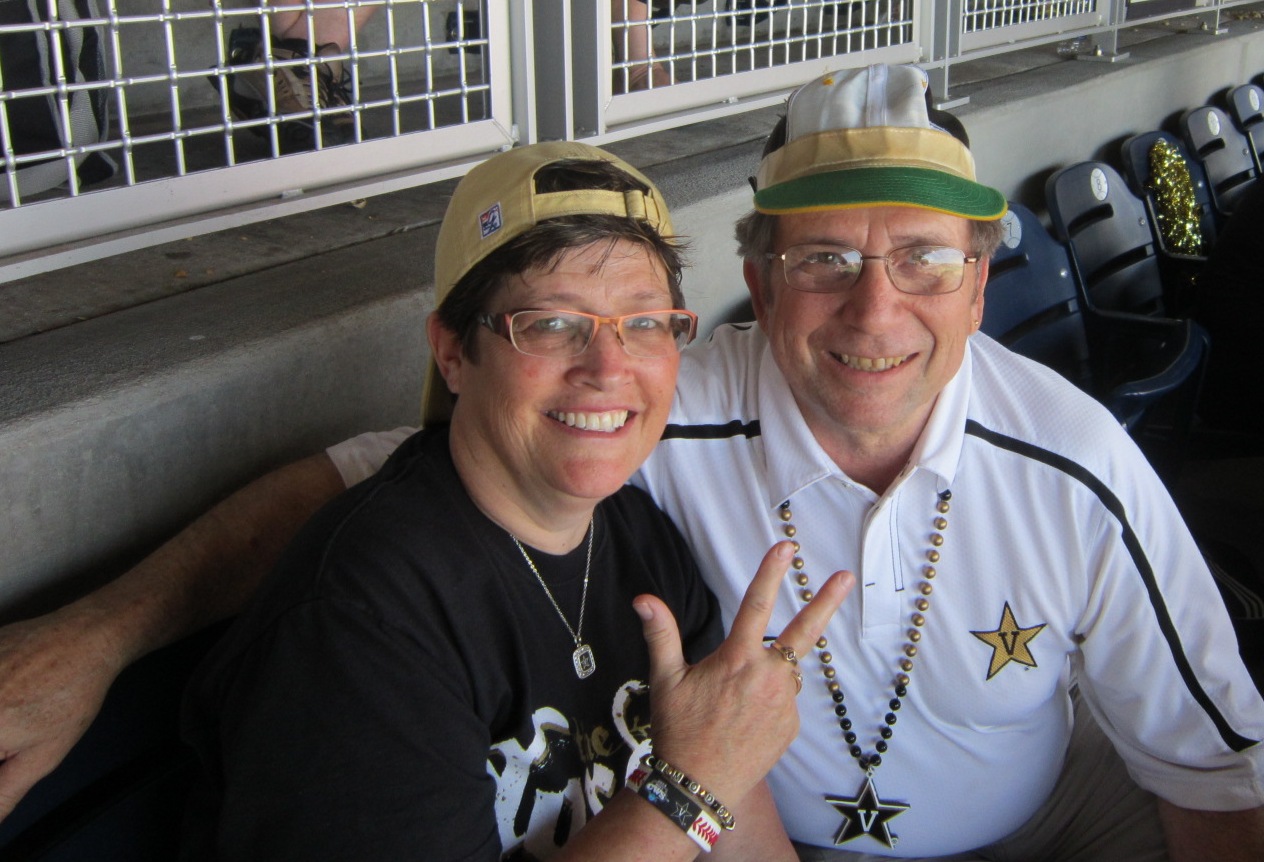 Carla and Chuck Offenburgers had to get their “rally caps” on more than once in the College World Series. 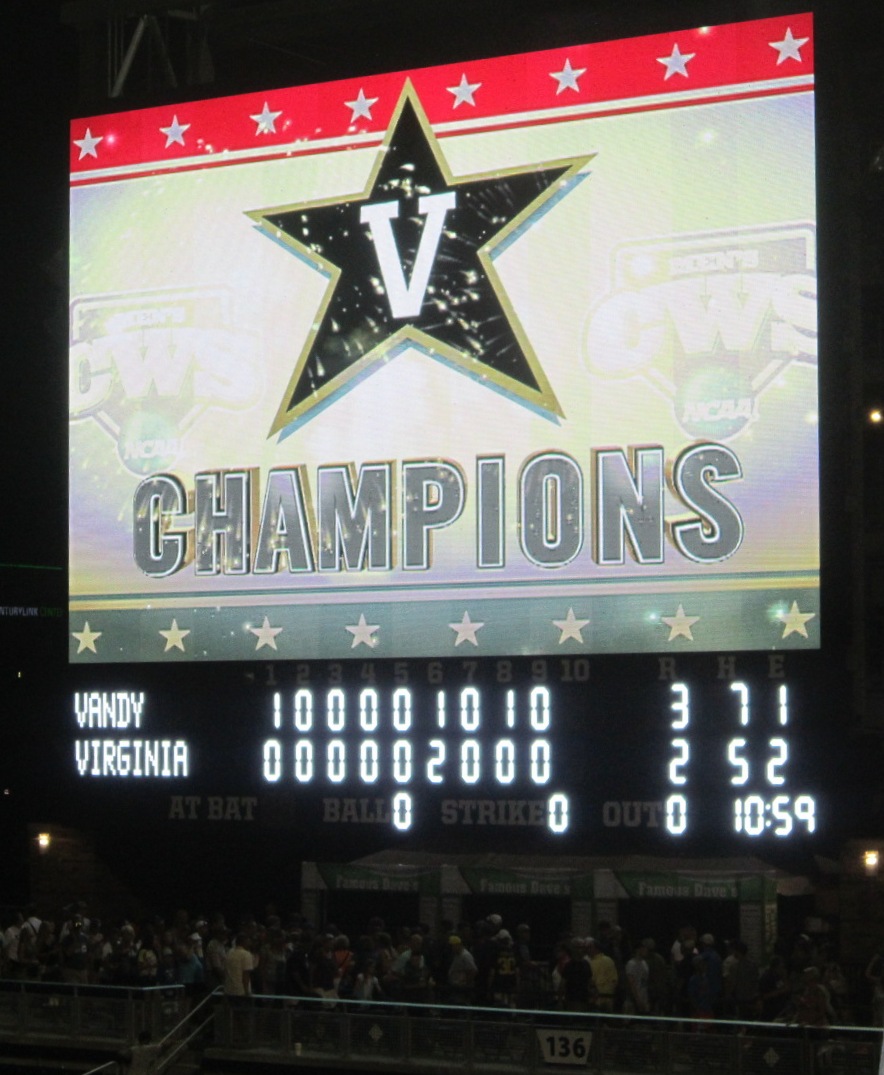 Here was the TD Ameritrade Park scoreboard right after the championship game. 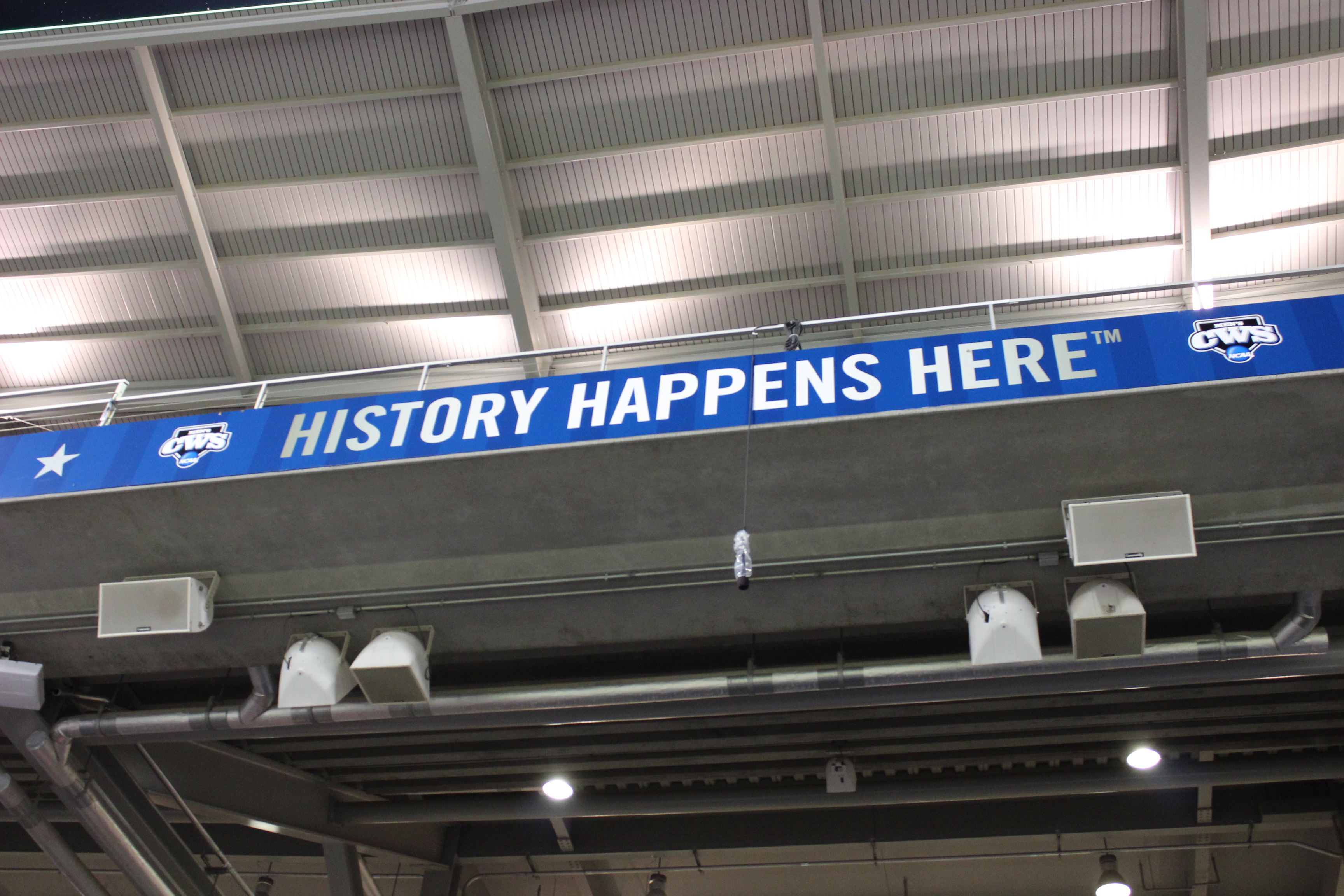 Signs like this all over the stadium in Omaha proved so true for the Vanderbilt Commodores and fans. 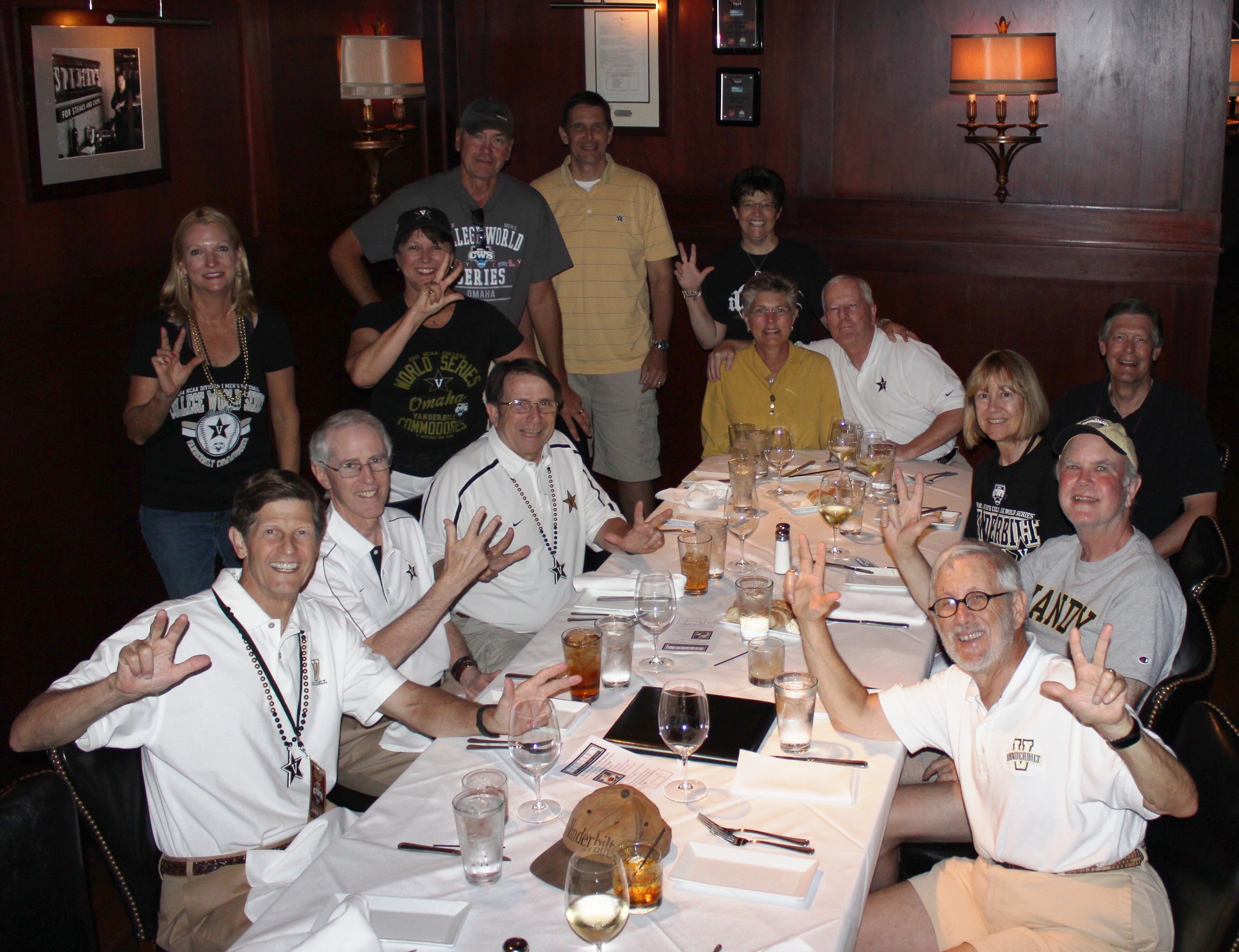 The best part of it all might have been the gatherings of old friends to cheer for the school they all love.  This group has several of Chuck Offenburger’s classmates in the Vanderbilt Class of ’69, along with other Vandy friends.  They met for Omaha steaks right before the game in which the Commodores won the national championship.