COOPER, Iowa, March 24, 2016 – My favorite political proposal is going to happen! I can just feel it! Oh, it was a little lonely when I was arguing in favor of it at county political conventions of both Republicans and Democrats here in Iowa: “The President of the United States shall direct the Commissioner of Baseball to establish a Major League franchise in Havana, Cuba.”

I admit I was a little surprised when, at different times over about a 14-year period from 1999 to 2012, I got the R’s and the D’s to vote in favor of my platform plank in both Buena Vista and Greene Counties. I meandered in and out of both parties a couple times during those years.  Truth be told, more than once there was some grumbling along the line of, “Oh, just pass this nonsense to shut him up, and let’s move on.” But pass it, they did!

When the platform chairpersons would ask me what my was behind my proposal, I would explain, “The Cuban people love baseball so much that if we started sending in our MLB teams and all their fans from all over America, the Castro regime would fall in the face of tourism, without a shot being fired.”

So you all saw what happened this week, right? President Barack Obama and his family made a two-day visit to Cuba and brought along with them a delegation of some of baseball’s greatest  former players, as well as the MLB executives. And the Tampa Bay Rays sent their whole team to play an exhibition game against the Cuban national team in the sold-out, 55,000-seat Estadio Latinoamericano in Havana.

It was just great. President Obama and Cuban President Raul Castro sat right next to each other. They even did “the wave” together when it was rippling around the big crowd. 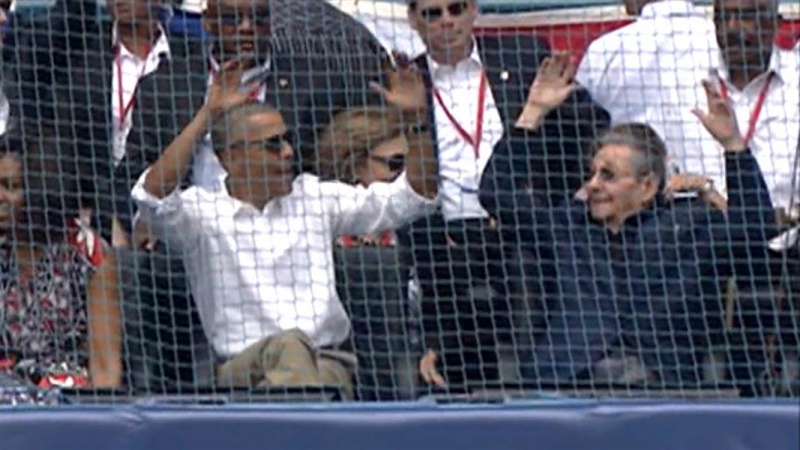 Presidents Obama and Castro doing “the wave” together at the ball game in Havana, Cuba.

Tampa Bay won 4-1, but we baseball fans got another reminder that there are outstanding players who are in the game in Cuba now.

Actually, there always have been. The grand old game has been played almost as long on the island, going back to the late 19th century, as it has been in the U.S. From 1954 to 1960, the Havana Sugar Kings were a AAA-affiliate of the Cincinnati Reds, playing in the International League based in the eastern U.S.

Today, as I understand it, organized baseball in Cuba has 16 teams in cities and towns scattered around the island. Havana has two of them. They play a 90-game season from November into late March or early April. The players are paid, but modestly enough that they maintain “amateur” status and could participate on the vaunted Cuban national team in the Olympics.

Many of those teams have very colorful names, like the one in the town of Sancti Spiritus. They are the Sancti Spiritus Gallos, which translates to be “Roosters.” Other nicknames (in English) of the teams include the Grapefruit Cutters, the Crocodiles, the Elephants, the Hunters, the Ranchers, the Oranges, the Bloodhounds and the Wasps.

Oh, wow, I think I need to be there some winter, traveling the island and going to ball games in the different stadiums and communities.

And I need to make a stop almost adaily at the Esquina Caliente, the famous “Hot Corner” in Havana’s Parque Central, where the discussion topic is always baseball, and the discussions can become very spirited.

So, MLB Commissioner Rob Manfred, now that you’ve seen and experienced baseball fever in Cuba, let’s get going on awarding that Havana franchise. Hopefully, the U.S. will waive the remaining few travel restrictions for Americans going to Cuba, and we’ll all cheer the success of baseball diplomacy.

The Republicans and Democrats of Buena Vista and Greene Counties in Iowa can say they helped make it happen!