PEOSTA, Iowa, Feb. 6, 2017 — His mind wanders easily and frequently. He barely hears at all.  But the 92-year-old monk Father Jim O’Connor, our trusted spiritual mentor, can still drop you with his humor. “Oh,” he cooed when I said something nice to him during our latest visit here at New Melleray Abbey in northeast Iowa, “you’re bringing a tear to my glass eye.”

We came on serious business to the Catholic Trappist monastery, which was founded here in 1849 so that Irish monks could help pioneering Bishop Mathias Loras build the Catholic Church across the new state of Iowa.

As you can read elsewhere on this internet site, the damned adenoid cystic carcinoma cancer, which my wife Carla Offenburger has battled successfully twice, has recurred.  She’s still feeling good and doing well, but we’re about to start a new round of treatment.  We asked Father O’Connor to anoint us again with holy oils, which we truly believe has helped us survive and recover the extensive cancer procedures we’ve both had during the past eight years. And we asked him to include our great friends and neighbors, Doug and Karen Lawton, whom we brought along with us this time. So here we were, the Methodist Lawtons, the Congregationalist Carla, and me the Catholic scribe who did all the writing of the notes that we passed back and forth to Father O’Connor so we could carry-on our conversation. 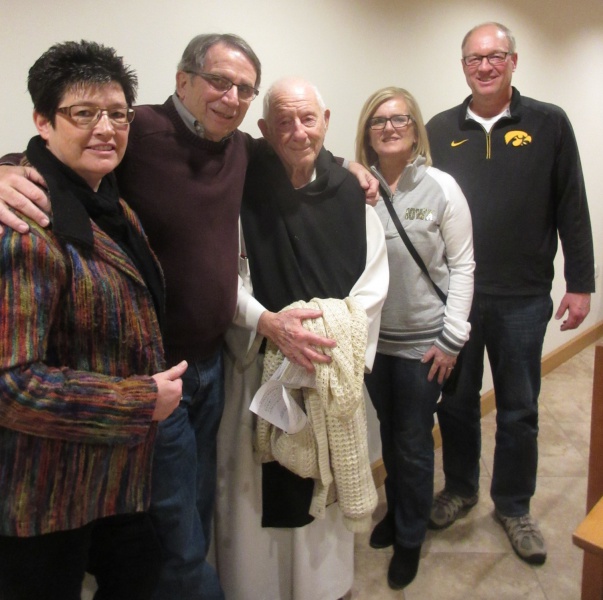 Carla and Chuck Offenburger, Father Jim O’Connor, and Karen and Doug Lawton during our visit on Saturday, Feb. 4. (Photo by Brother Juan Diego)

Before we got to the actual anointment, I asked, “So, Father Jim, now that your 92  and you’ve spent 67, going on 68 years here, are you still glad that you’re a monk?”

“Oh, I suppose I am,” he said with his quick smile of contentment. “I’m kind of like a faithful old dog. I’ll go where they feed me.”

We talked again about his boyhood in Chicago, his service in World War II as co-pilot of B-17 bombers that flew many missions in Europe, his brother Tommy’s death as a fighter pilot in the Asian theater of WWII, his surviving sister Jeanne O’Connor’s career as a teacher in Chicago, his time at Notre Dame and DePaul universities getting his degree in English, then his decision after the war — which he never expected to survive — for a life of prayer, meditation, hardwork and sacrifice.  You can read more about his career and our friendship in a column from our visit here almost a year ago, by clicking right here.

Then I asked if prayer and meditation are still important to him.  “Yes, but after all the years I’ve been praying here, it’s really changed,” he said. “You know, when we came in here after the war as young novices, they’d give us a rosary that seemed like it was about three yards long, and we’d say the structured prayers — the Our Fathers, the Hail Marys — over and over and over.  Now it’s more like an interior prayer life that I have.  I find that I pray much of the time without words.  I feel like I make direct contact with God in my thoughts, and then specific words aren’t important.”

For those of us of less spiritual depth, or intensity, words still matter, he knows.  So he came up with some “direct from my heart, never used on a human being before,” as he put it.  Putting oil from small vials on his thumb, he then slowly blessed each of us on our foreheads, jaws and near our ears.

He paused as he looked at Carla closely again, then said, “You have the most beautiful face.”  Then added, “And are those your own teeth?”  His altar boy, which I had volunteered to be, couldn’t help but laugh out loud.  (Later, Father O’Connor excused himself after some other sly remark and said, “Sometimes there’s still a little impish boogeyman in me.”) 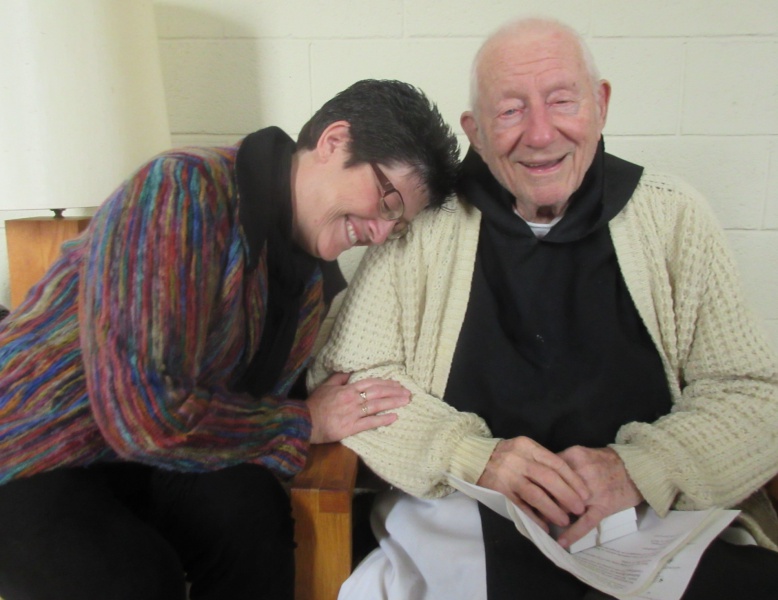 Then he wound up the prayer. “Oh, Lord, we gather together in your name.  We come from different corners of the world and from different faiths, but we’re finding we are all one in Jesus Christ.  We want to be very close to you, present to you, in this world. And when our time comes for the next world, we look forward to being with you there, not in sorrow but in happiness and fulfillment.  We join ourselves now in prayer for this world — that’s a big job! — and we pray for each other as well.  We ask your blessings upon us.”

We didn’t pray for vocations that will bring more monks to New Melleray, but we should.  The population has now dropped to 30 or fewer.  On Saturday, there appeared to be more people on retreat at the monastery than monks.

It would seem to most outsiders to be a hard life.  Yet, I know it’s been a good one for the best thinker and the best writer I’ve ever known, Father Jim O’Connor.

And in the 35 years I’ve been dropping in to pester him and the other monks, I have come to believe that the spiritual work they do here is crucial — important even to people who are totally unaware of it. 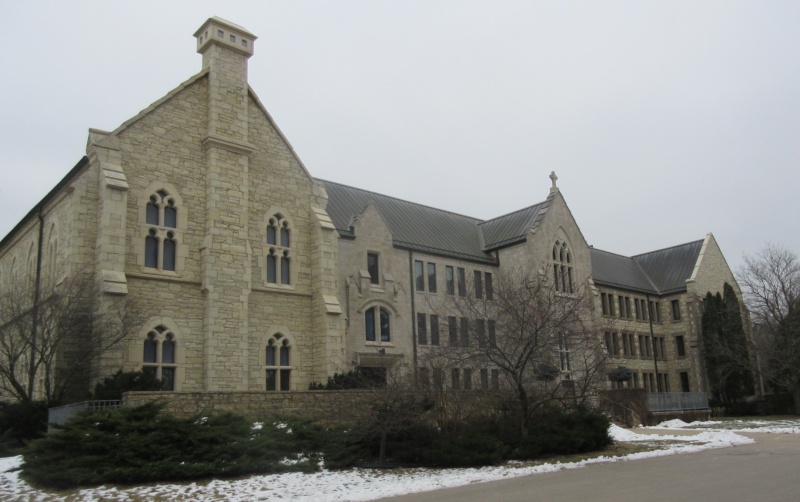 The front of 118-year-old New Melleray Abbey, with the church on the left, the front entrance to the monastery below the cross and the guesthouse that makes up the front wing of the huge structure.  Built as a complete quadrangle with an additional wing, New Melleray’s population reached about 165 monks during in the era of World War II but now has fewer than 30.  A former abbot once said “the monasteries tend to fill-up during bad times and dwindle down when times are better.” 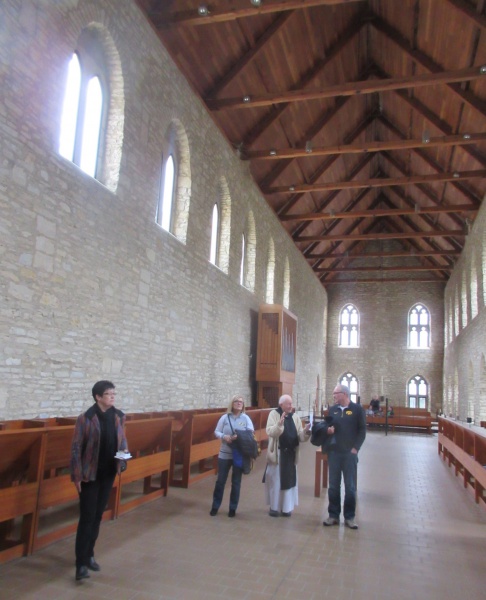 During our walk around the monastery, we are shown here inside the breathtakingly inspiring church. 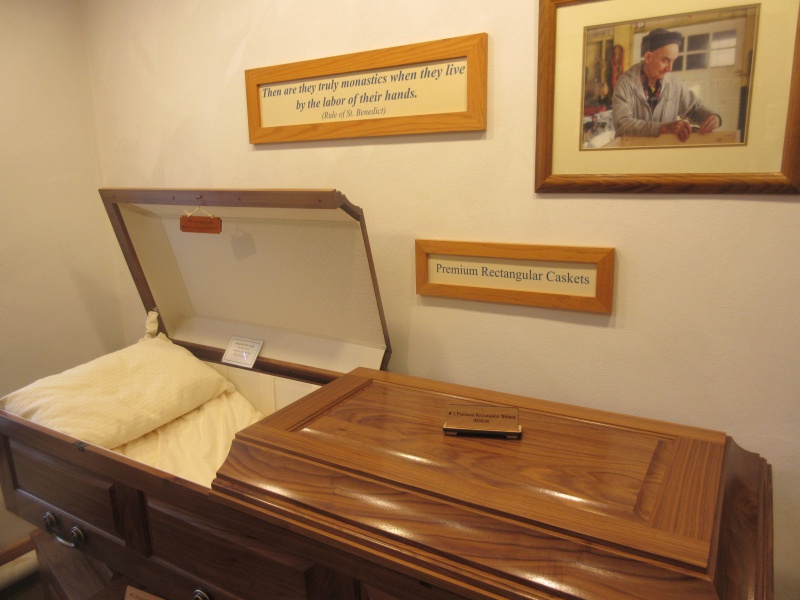 A display showing one of the Trappist Caskets that are made by the monks and other workers from lumber native to the monastery grounds.  The casket-making company, which is owned by the monks, is located in a new building across the county road from the monastery itself. 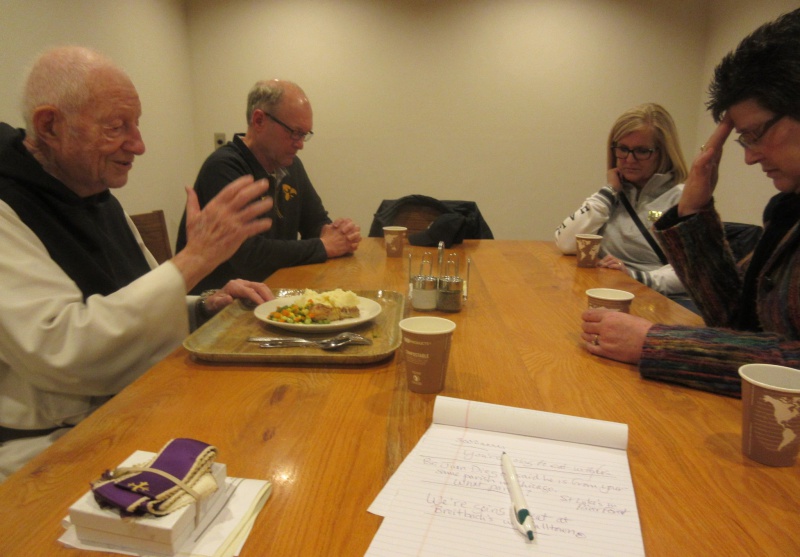 Father O’Connor doing the blessing at lunch.  We visitors did not eat at the abbey, since we were traveling on to the legendary Breitbach’s Country Dining restaurant in nearby Balltown, but we continued our conversation with O’Connor while he ate.

Father O’Connor was intrigued to learn about the Lawton family’s 100-plus years of farming in Cooper area of west central Iowa.  He’s shown here talking to Doug, with Karen out of the photo to the right. 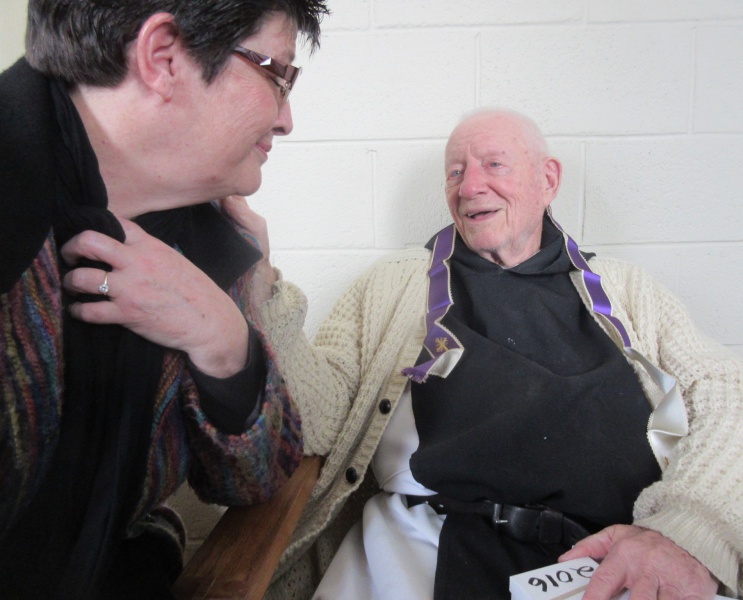 Carla Offenburger and Father Jim O’Connor after the anointment.

2 thoughts on ““You have the most beautiful face” the monk said, then adding, “And are those your own teeth?””