COOPER, Iowa, Dec. 19, 2017 — It was a year ago right now that my oncologist Dr. Matthew Hill gave me the news that my cancer had returned. That came a year after I’d had major liver surgery in the fall of 2015, when Dr. Qasim Chaudhry removed 60 percent of my liver, which held a 6-pound cancerous tumor. I was feeling pretty good about my prognosis during those intervening 12 months, with scans every 90 days that came back “good.”

But the recurrence a year ago meant we would spend much of 2017 in aggressive treatment – including an “ablation” of three tumors with long needles in mid-February, chemotherapy that didn’t work in the spring and early summer, and then another major surgery Aug. 30. In that one, Dr. Chaudhry removed seven tumors and more than 60 suspicious nodules floating in abdominal tissue. He told us he removed “all the disease I could see,” and thought it was “at least 95 percent” of it. I have had a good recovery since Aug. 30.

My 90-days-later appointment with Dr. Chaudhry was last Thursday, Dec. 14, where I actually met with a surgical partner, Dr. Gaurav Jain. He shared the results of a new CT scan I’d just had.

Of course, Chuck and I were optimistic – aren’t we always? But we left very disappointed. And as Chuck has termed it, “a bit wobbly”.

My cancer is back. Again. 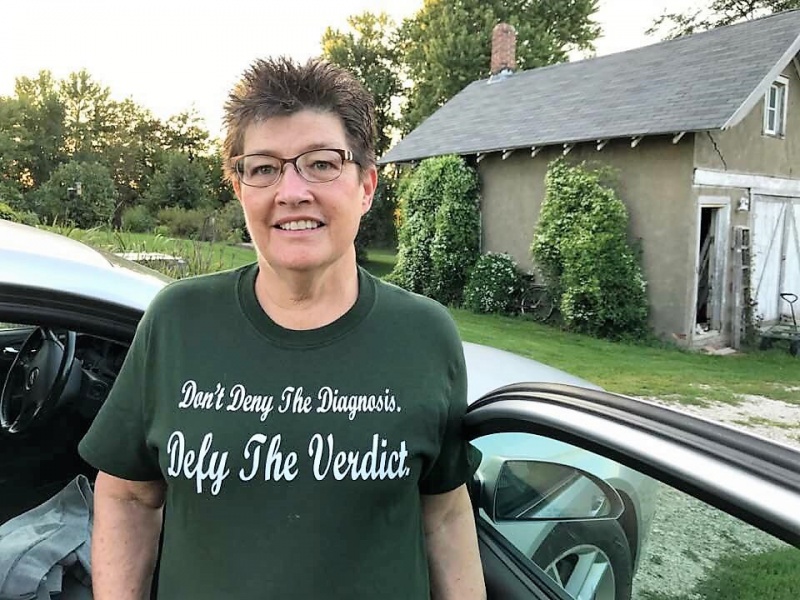 Carla Offenburger, when she was leaving home late last summer for surgery at Iowa Methodist Medical Center in Des Moines.

Those of you who have long been following my journey will recall I had a golf-ball sized tumor in my lower jaw/neck removed in the spring of 2010.

The cancer was identified then as adenoid cystic carcinoma (ACC). It’s a rare cancer that often starts in the salivary glands and lymph nodes in the jaw and neck. It usually appears in encapsulated tumors, which often show up later in or around the liver, lungs and other organs. ACC is diagnosed in about 1,200 people in the U.S. every year, in twice as many women as men. It normally is a slow-growing cancer. Research is underway globally for drugs that might be effective in treating ACC, but so far, there is no known cure. Surgical removal is the most common medical response.

In late summer and early fall of 2015, we discovered that the cancer had moved to my liver, and that’s when Dr. Chaudhry removed the huge tumor and much of my liver.

In December 2016, a routine follow-up scan showed tumors had returned to my liver, abdomen and pelvic area. Ugh.

So, as I mentioned earlier, I’ve spent the bulk of 2017 doing some type of cancer treatment. A PET scan on Jan. 3 revealed just how invasive the cancer was. A good part of that PET scan may have been that it meant I met the high health insurance deductible fee for the year – before some of you had put away your New Year’s party supplies.

On Valentine’s Day, Dr. Olaf Kaufman did a radiation ablation on three tumors, which eased any immediate danger.

In the last week of February, Chuck and I traveled to Vanderbilt University Medical Center in Nashville to get a second opinion on treatment options from Dr. Barbara Murphy, who we learned has treated many ACC patients from across the nation. She was quick to agree with what Dr. Hill, Dr. Chaudhry and Dr. Kaufman were telling us back home.

In late March, we took a brief hiatus from cancer to travel to Cuba – a “bucket list” item for us. And when we returned, I started 90 days of oral chemotherapy. To no avail.

In July 2017, a CT scan showed no shrinkage or absence of the tumors identified 90 days prior. Surgery was the next option – again.

On Aug. 30, I was back in the surgery room with Dr. Chaudhry, who spent five hours identifying and removing every bit of disease and all the suspicious nodules he could find. He said he jostled and inspected every organ in my lower chest and pelvic area. 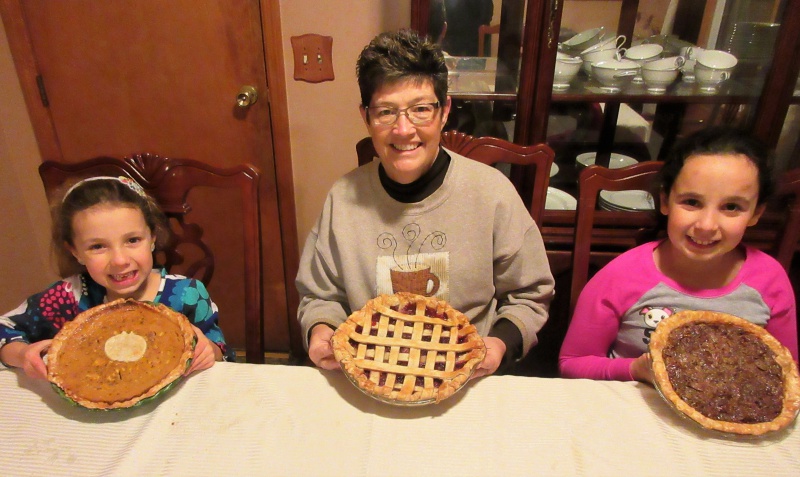 And here we are today

The CT scan on Tuesday, Dec. 12, was of my abdomen and pelvic areas. It showed one small tumor at the bottom of each of my lungs; one re-developing tumor on the edge of my diaphragm; one just over an inch in size near my left ovary area; and a new small one at one side of my liver.

Needless to say, this is a real blow to me and Chuck.

On Friday, Dec. 15, after we met with Dr. Hill to begin planning and considering our options, I told Chuck I was “pissed and fragile.” Dr. Hill ordered another CT scan, this one directly of my lungs, so we could see if there are more tumors up higher in the lungs. They wouldn’t have shown up on the previous scan of the lower part of my lungs, abdomen and pelvic area. I had the new scan Monday morning, Dec. 18.

On Monday evening, Dr. Hill called. He was seeing six or seven more small tumors throughout the lungs. And as he said, “this is not good news.” He indicated he has been in conversation with Dr. Chaudhry.

My case is still scheduled for consideration by the “Tumor Board” of cancer specialists for early Thursday morning, Dec. 21, at UnityPoint Health/Des Moines, where the latest scan reports will help the doctors determine treatment recommendations. No doubt, the lungs will be the focus.

Re-grouping for this go ’round is a bit tougher for me. When I wrote my high school tennis partner, Suzanne Lang, of Des Moines, that I was “pissed and fragile,” she immediately wrote back “pissed and strong!” I hope so.

Throughout 2017, I wrote about how I was “dancing” through this. Well, I’m taking off my dance shoes and putting on an extra seat belt. I feel like I’m on a roller coaster. This is going to be quite a ride – in a race I intend to win.

Last Friday, Dr. Hill pointed out that through all this, I really haven’t been “symptomatic” – showing signs of cancer illness. “Look at you right now,” he said. “You look like you shouldn’t even be in here” discussing cancer treatment. I intend to stay that way. Exercise and diet will be my focus to stay and remain “healthy” so that I can deal with what is to come.

While I look healthy, I still do hurt from my late-August surgery. I have 24 inches of scars on my abdominal area. I have little or no muscle in my upper abdomen and many of the nerves in that area were severed during surgery. But I’ve always been moving forward on the optimistic road of “this too shall pass.” Now, my “hurt” has hit my mind and heart.

For solace, I pray, and I keep returning to a book I have held dear and read multiple times during the past two years, “50 days of Hope” by Lynn Eib. It was sent to me by another cancer survivor, Kirk VanKirk, of our neighbor town of Perry, while I was recovering in 2015. The entire book is filled with hopeful stories of cancer patients and survivors. I find it to be very calming. 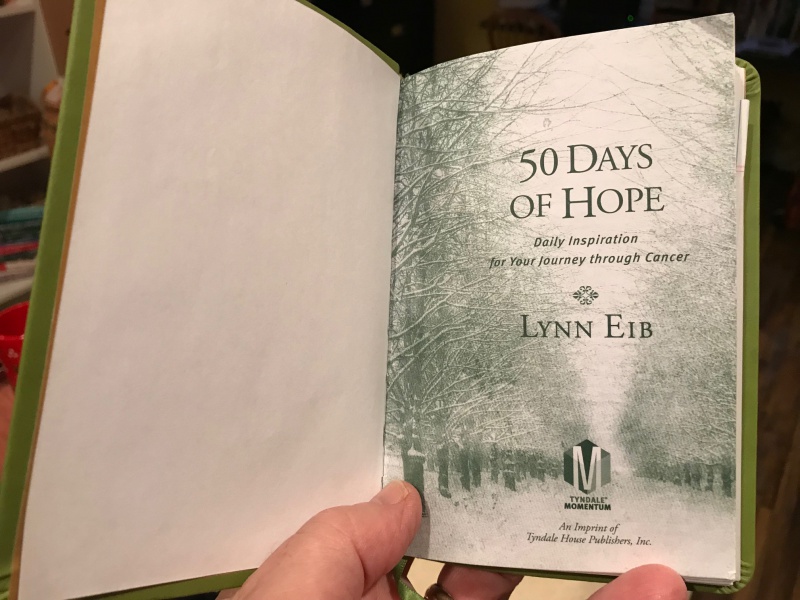 One of the books that is sustaining Carla Offenburger right now.

My focus now in the book is on the story of cancer patient Rev. John Piper, who says, “I remember thinking I could go home and feel sorry for myself – but I would still have cancer.” He said, “I don’t want to waste this cancer.” He wanted to be an example for others on how not to be afraid and how to move forward with optimism.

I’m not wasting my cancer, either.

I’m not wasting the continuing prayers that are being said on my behalf.

I’m not wasting the cards, emails or Facebook posts of encouragement that have been sent to me.

I’m not wasting the gifts of money, gas cards or wonderful meals that have been delivered to my home.

I’m not wasting all the time spent with those who have visited me in the last year while I was sick or weary.

I’m not wasting the support of my family.

I’m not wasting any of what I’ve been through since 2010. And that means Chuck and I are going to do everything we can to drive this cancer out of my body and our lives.

And if all we do, and if all the work done by the medical professionals we consult, doesn’t make a damn bit of difference, at least we are going to be in the driver’s seat – with seat belts on – for this journey.

Yes, cancer does suck. And honestly, it sucks to be me right now. I want to be strong, but I admit I’m fragile. Strong or fragile, I still have cancer. I’ve got the best team of physicians, including the “Great Physician” on my team. I’m going to actively pursue all my options. And I’m going to keep myself as healthy as I can. And happy.

There is no other option.

I’ll appreciate knowing you are still with me during this go ’round. And please continue to pray with me – for strength, courage, health and healing.

Now, let’s all have ourselves a merry little Christmas and welcome the Christ child into our lives once again. He will offer all of us hope, peace, joy and love.

34 thoughts on ““Strong or fragile, I still have cancer.” And so much to live for.”