COON RAPIDS, Iowa, Nov. 13, 2018 — The lights are burning late at night this week at the “River House” in the wild, wooded and wondrous Whiterock Conservancy southeast of this western Iowa town. Zack Jones, artist-in-residence the past three weeks, is getting ready for a show this Saturday when he’ll share and sell what he’s done.

The 44-year-old Jones, one of Iowa’s best and busiest painters, has been inspired at Whiterock, the 5,500 acres along the Middle Raccoon River that the Garst family, of Coon Rapids, generously put in a trust for the public to enjoy forevermore. “Oh, I can only imagine living here through the course of a year,” said Jones, whose home, normal studio and gallery are in Malvern in southwest Iowa.

The show, which Jones is calling “Iowa’s Natural Heritage,” will be held 11 a.m. to 3 p.m. Saturday at Whiterock’s Bur Oak Welcome Center, a couple miles east of Coon Rapids on Iowa Highway 141. Ready for viewing and sale will be 15 to 20 new paintings, of all sizes, that he has created during his residency here. 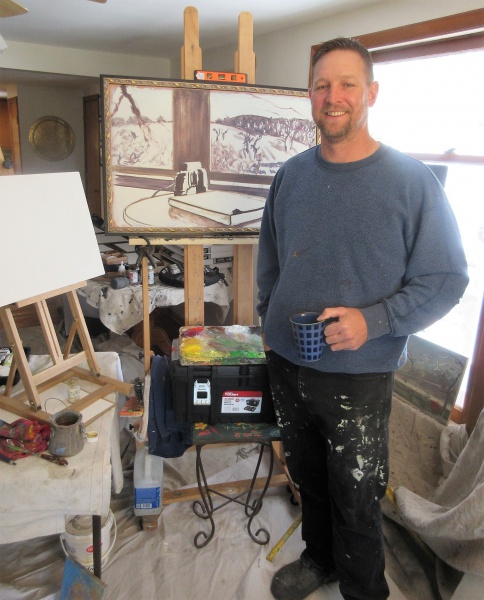 Zack Jones in his temporary “studio” at the River House at Whiterock Conservancy.

During our visit on a recent day, Jones glanced quickly over the paintings and sketches he has started and said, “To be honest, I feel like I’m still digesting the experience,” he said. “But I think my art and conservation have a future together.”

In his 20 years as a professional, he’s already established himself as a painter of heritage, rural life and small town character.

He’ll have another neat opportunity to portray all that next March, when he is already booked for a residency at beautiful Waubonsie State Park in the corner of southwest Iowa. Jones and two other artists have been selected by the Iowa Department of Natural Resources, Golden Hills RC&D and the Loess Hills National Scenic Byway for what are believed to be the first artist-in-residency program in an Iowa state park.  Their stays at Waubonsie will be from January to April. To learn more about that program, click here.

I’ve been writing about the development of Jones’ career since first meeting him a dozen years ago when he had first moved back to his hometown of Malvern, after extensive art training and experience in Arizona.  One story with good background about him and his work was published on Offenburger.com three years ago when he was completing a huge mural on the side of a local museum in Oakland, another southwest Iowa town.  You can read that story by clicking here.  Since then, Jones has finished another very large mural in Malvern, and you’ll see a small print of that in one of the photos below here.

During his Whiterock residency, Liz Garst has provided Jones his place to live at her former residence, known as the “River House.” That’s just up the bank from the Middle Raccoon River, which cuts through the rough terrain, exposing towering limestone bluffs that in the setting sun can appear white — and thus the name that’s been given the area.

Jones set up his studio in the dining room, although it has now sprawled on through the kitchen.  Garst also provided the artist with a John Deere “gator,” which Jones uses to meander Whiterock, making sketches and snapping photos.  Then he retreats to the River House, turns on his studio lights and goes to work on the fine art you’ll see at his show on Saturday. 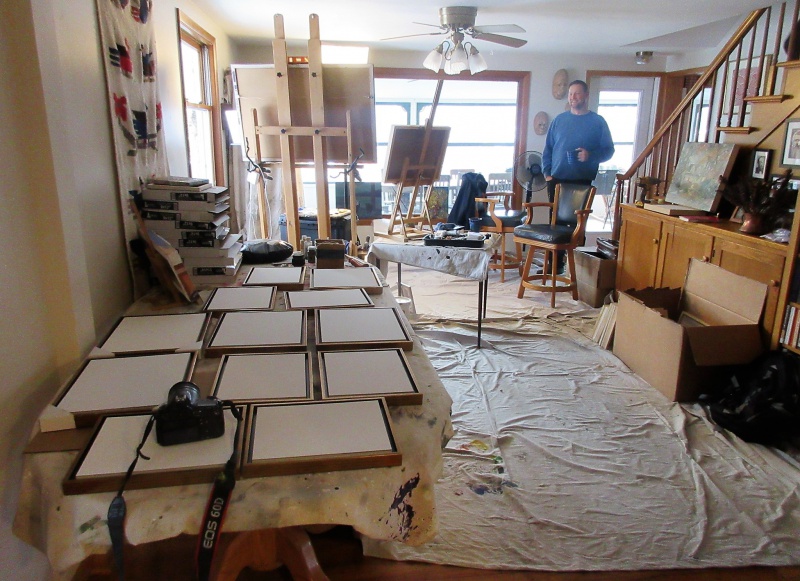 When an artist takes over your dining room. 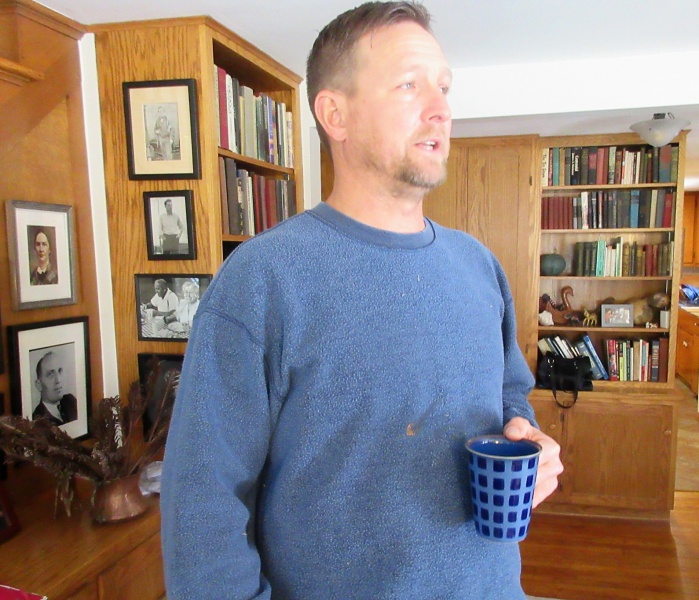 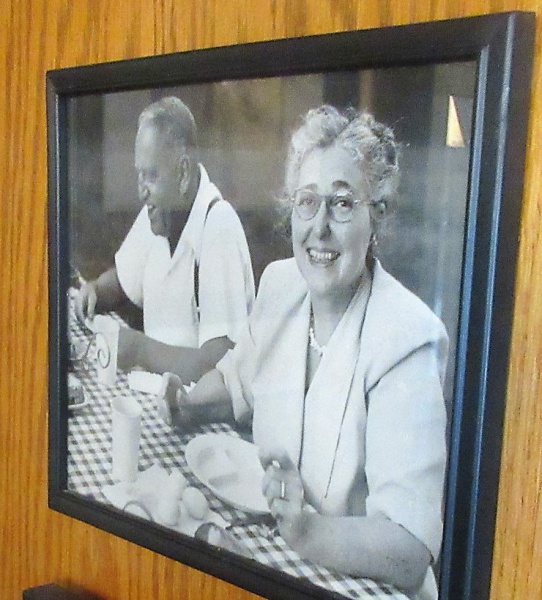 Quite an inspiration — big things can happen here. One of the Garst family photos hanging on the wall in the room where Zack Jones is working shows Roswell and Elizabeth Garst, who were Liz Garst’s grandparents.  They were the couple who made history in 1959 when they hosted Nikita Khrushchev, then the leader of the Soviet Union, and his wife Nina at the Garst farm home on the south edge of Coon Rapids.  Garst, the agriculture expert and super seed salesman, and Khrushchev had continuing conversations about improving Soviet food production — and in doing so helped defuse the Cold War for a time. 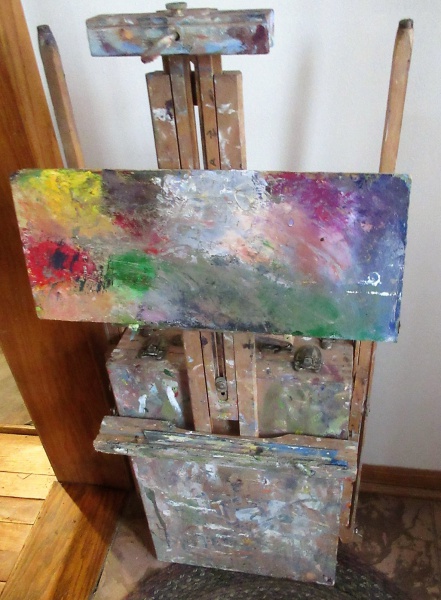 In the hallway, Jones has the portable uses for en plein air painting around Whiterock Conservancy. 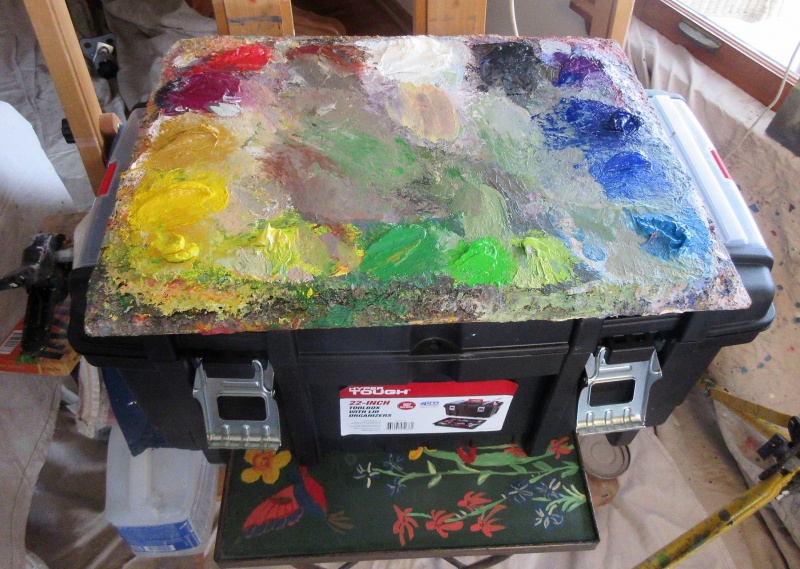 The artist’s palette, which he has resting on top of his tool box. 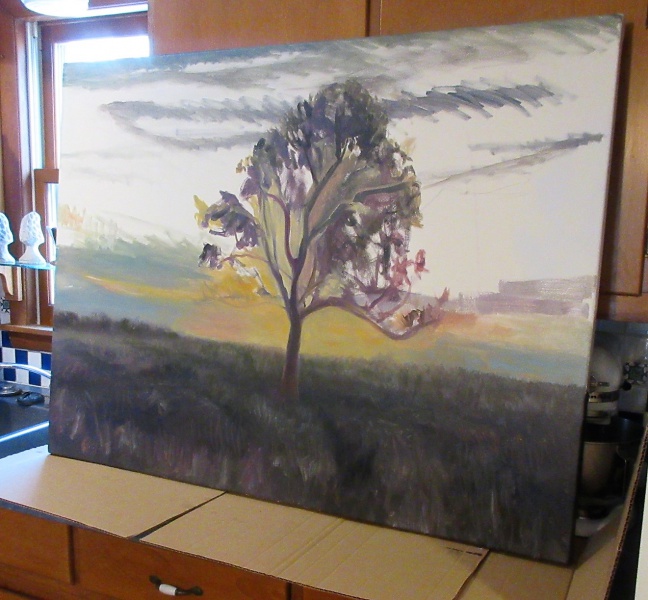 A sunset painting in development. 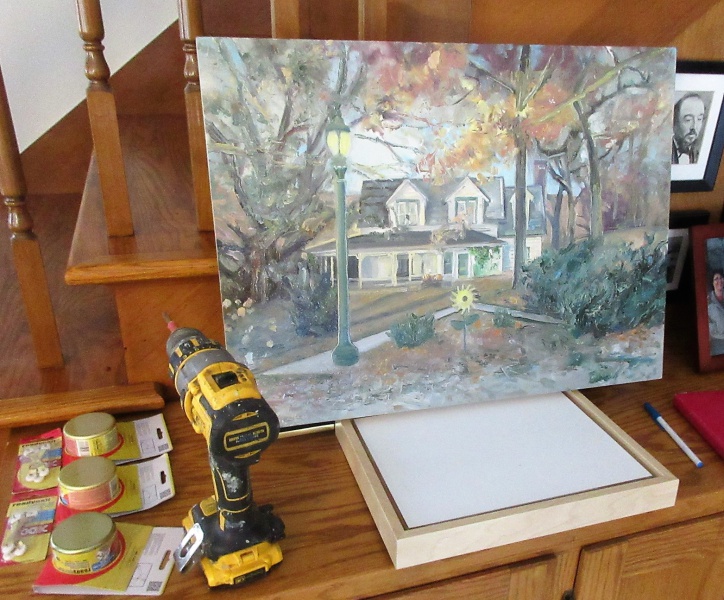 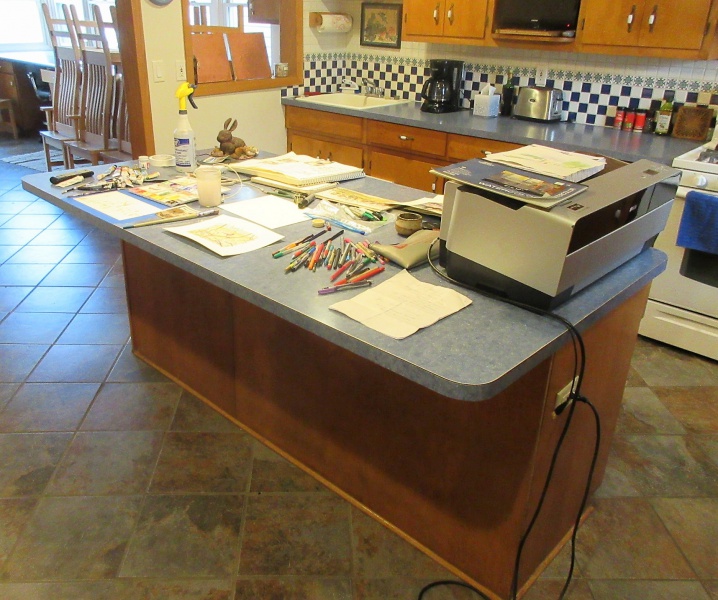 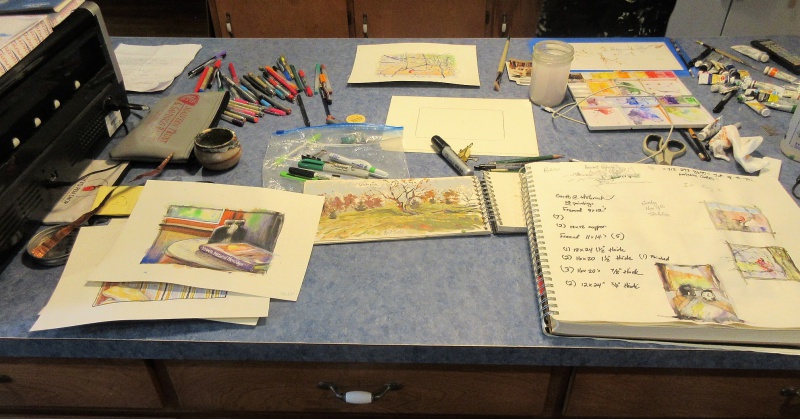 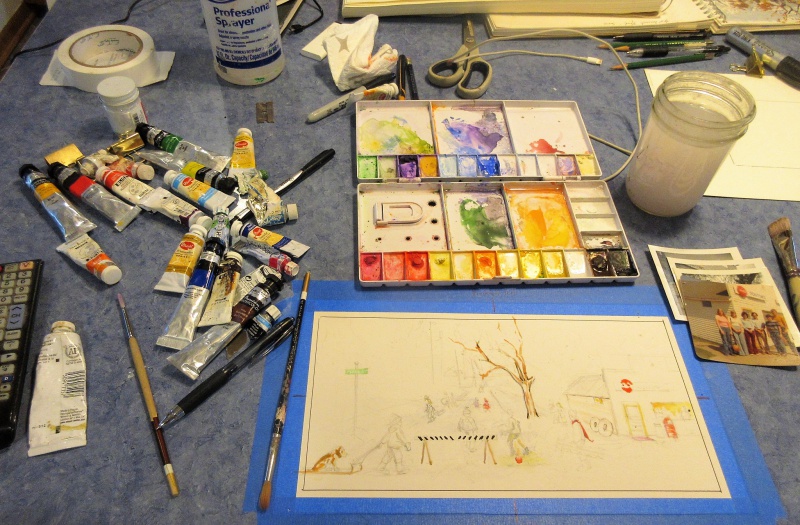 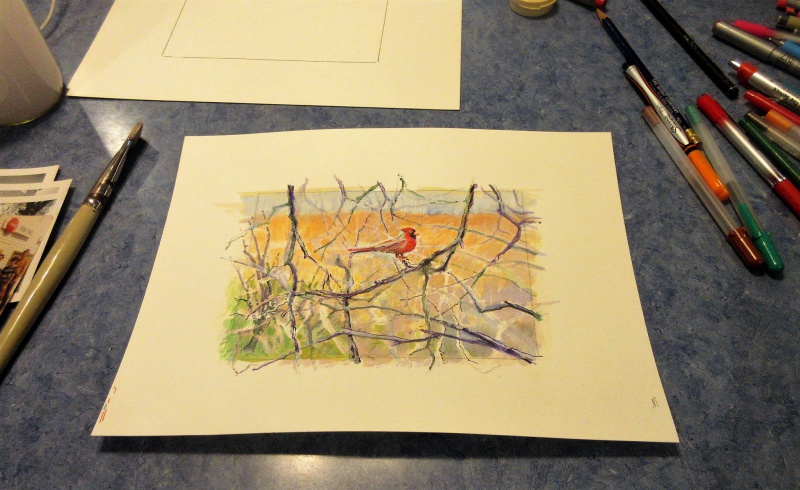 So simple, so pretty. 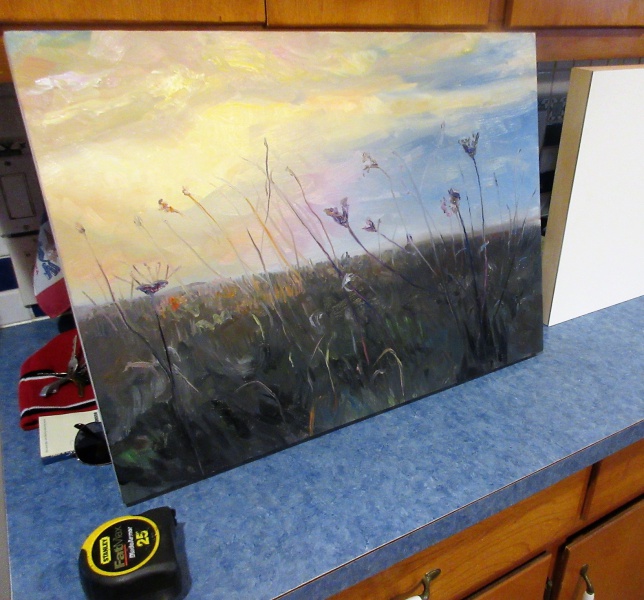 Another painting in the works. 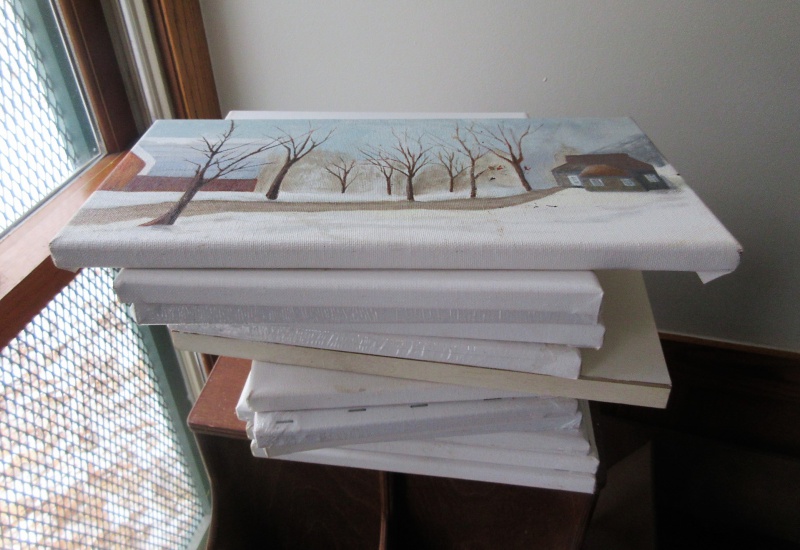 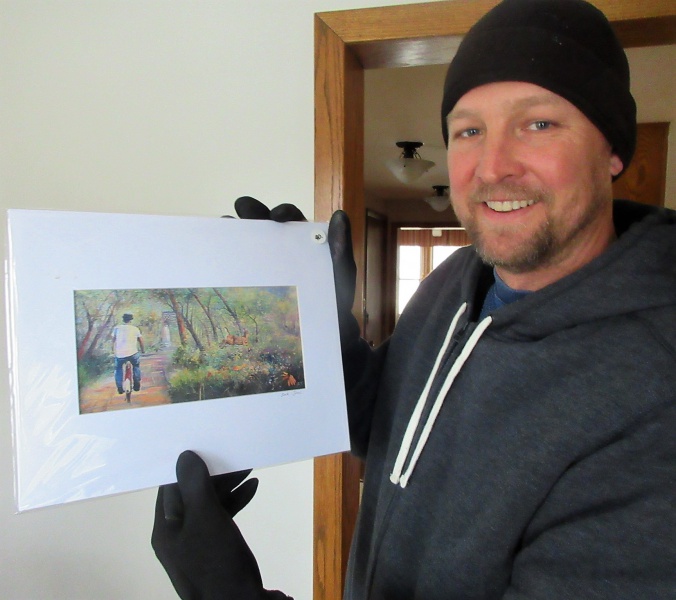 On our way out the door for lunch in Coon Rapids, Jones shows a small print of what is actually one of his largest works — the 70-by-30-foot mural “Wabash Escape” on the north exterior wall of Mulholland Grocery in his hometown of Malvern. The mural, completed this fall, depicts a scene on the 63-mile Wabash Trace Nature Trail, which passes through Malvern.

One thought on “If an artist takes over your dining room? Big mess and terrific art!”