CHURDAN, Iowa, March 27, 2019 — In this 2020 presidential election cycle, on the Democrats’ side of things, there are some candidates who are what I’ll call “No Deal Democrats” — the ones way older than I am (71) that I flat refuse to vote for. There are also some “Green New Deal Democrats,” mostly way younger than I am, whom I’ll consider. We in Greene County recently got to spend time with a candidate I’ll call a “Real Deal Democrat,” John Delaney, and I really like him.

And the event he was at — the Greene County Democrats St. Patrick’s Soup Supper on March 15 in the newly-renovated Public Library in tiny Churdan — was an almost idyllic Iowa political gathering. More than 50 packed the place. The soup was good. The questions were good, lively & respectful; ditto on Delaney’s answers. And I think we all left feeling like we’d just experienced two hours of politics the way they ought to always be.

You’ve got to give John Delaney some serious consideration. 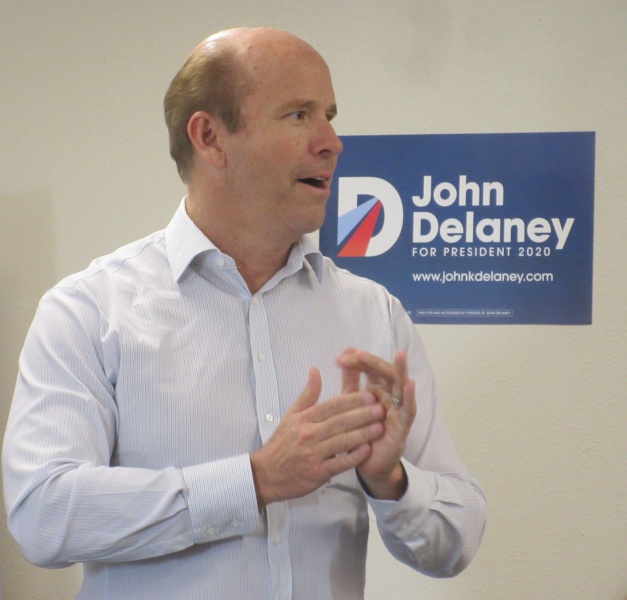 He grew up in northern New Jersey, son of a union electrician. After Catholic high school, scholarships from his dad’s union helped young Delaney graduate from Columbia University and then law school at Georgetown University.

He had a very successful early business career in business finance, starting up, growing, and taking public two financial companies. He said he and his 2,500 employees financed 5,000 expanding companies, making $40 billion in loans.

“I’m a capitalist, and I’m not afraid to say it,” he told the crowd in Churdan. “I was pretty good at it. Now we need to make capitalism more inclusive and fair” and “channel it toward proper goals” that serve the public.

When he served three terms in the U.S. House, he represented western Maryland, a strong agricultural region with lots of dairy farming.

He said as a presidential candidate, “I want to build a ‘big tent’ Democratic Party that brings together Democrats, the independents who are the biggest block of voters, and even disaffected Republicans. The person who can be from the big tent party is the person who can beat Donald Trump.” 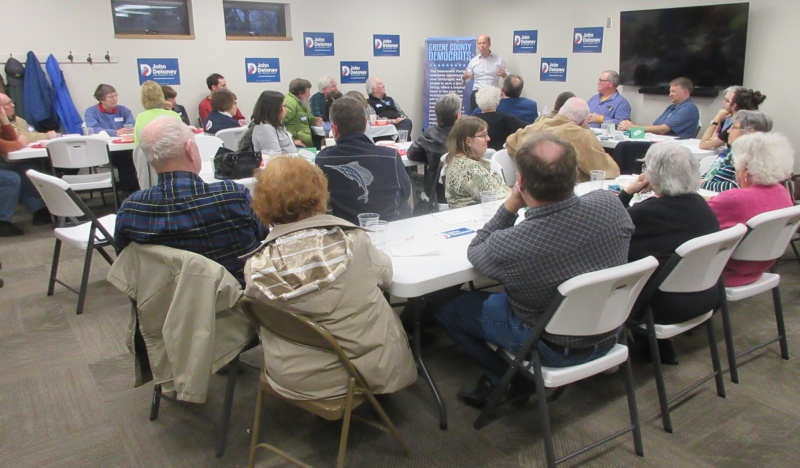 Delaney and part of the crowd in Churdan.

Even more important, Delaney said, “I want to be the president who unifies this country again, who restores the notion of common purpose.”

He called current President Donald Trump “our divider in chief,” and later added, “When the American people think their fellow Americans are their enemies, that’s a huge problem, and that’s what this president has caused.”

Delaney said, in response to my question, that even though he is a “very active” Catholic, he is “pro-choice.”  I think that’s the wrong choice on the contentious abortion issue, but it means he’s in-step with most Democrats.

“I firmly and completely support a woman’s right to make her own decisions” on reproductive healthcare, he continued. “And I support Roe v. Wade as established law,” adding, “I don’t want my church to dictate public policy.”

When I asked him how he feels in general about the Catholic Church now, with its global scandal over sex abuse by clergy, Delaney said “as a Catholic, I am really, really upset. I think we need to get lay people involved and fix the church. This is a massive, systemic issue. And in my opinion as a Catholic, my church is worth saving.” 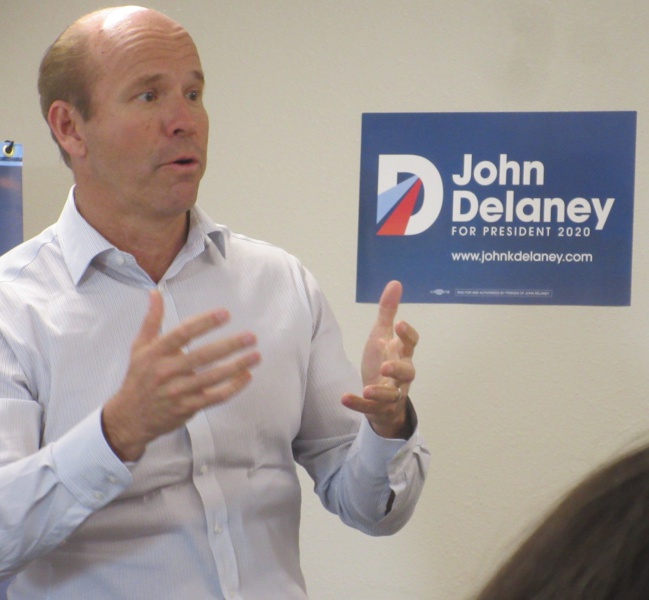 He said Catholicism’s “social justice ministry” is its greatest contribution to humanity and that the church “is irreplaceable in its global fight against poverty.” He said after conversations with a Jesuit scholar and other thoughtful friends in the church, he now favors “allowing women to be priests.”

Should priests be allowed to marry? “I don’t know about that,” Delaney said. “I just don’t know. I have enough trouble thinking about how to run the country now.”

But he’s “very concerned” about the Catholic church. “I go to church now, and there are only half as many people there,” he said. “It’s sad.”

John Delaney is now on his 25th campaign trip to Iowa over about the past two years. He is now one of about 12 Democrats who have declared their candidacies for president or are strongly leaning in that direction. He said “the number may grow to 17 or 18.”

What does he plan to do to break out of the pack and be a top finisher in the early-February 2020 Iowa precinct caucuses?

“To some extent, that’s the job of you people in Iowa,” he said, “to listen to all of us and then identify someone that you think will be a good president. My part of that is I’m going to continue work hard all over Iowa, talking and listening to as many people as I can.” 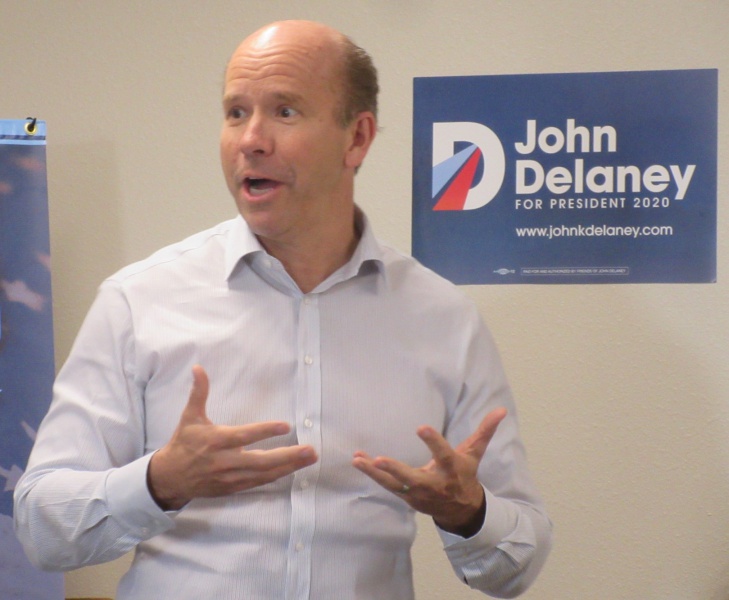 A President Delaney would want to debate Congress regularly — on live TV.

It seems that all the presidential candidates have at least one idea that nobody else is proposing. Delaney’s is probably that the president debate Congress four times each year, for three hours at a time, on national television.

He says that would give the public an opportunity to listen to unfiltered debate, to hear the arguments first-hand, rather than depending on social media accounts of it. It’d be a great way to start discussions on new ideas, Delaney said, although he acknowledged at times it might devolve into something “a little like the Wild West” – or maybe the British parliament.

He said that if he’s elected, his focus in his first 100 days in office will be on quick passage of significant legislation which “is already in Congress and which we basically agree on” – like infrastructure improvements, criminal justice reform, some elements of immigration policy and others. The point, he said, would be “to restore a sense of decency, a sense of common purpose that we seem to have lost now.”

John Delaney and his wife April have been married 29 years and have four daughters, ages 26 to 11, presumably a lively bunch that he should have on the road with him in Iowa whenever possible.

He will have to deal with the old doubt about whether, in era when TV plays such a huge role in political campaigns, America will elect a bald man. But he is a young-looking, physically fit and actually good-looking bald man. And if he can somehow get the nomination in the crowded Democratic field, he’d be facing an incumbent who wears an outrageous — and possibly color-tinted — comb-over. That’d be one of many stark differences they’d have. 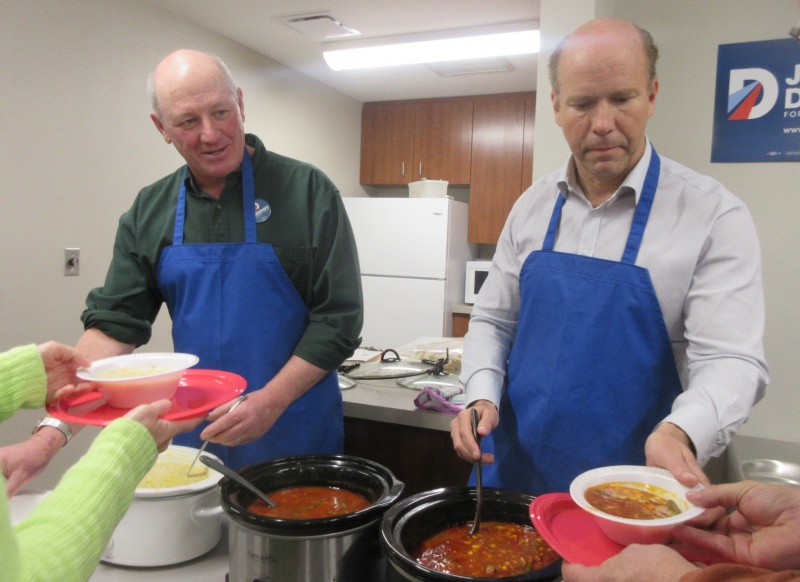 2 thoughts on “Among the Democrats running for president, Delaney is a Real Deal”