COOPER, Iowa, July 4, 2021 — I can’t recall seeing a better stand of corn just before Independence Day than I did Friday evening, July 2, in the fields of our neighbors and pals, Doug and Karen Lawton, just outside our tiny western Iowa town.

Tall, straight, lush and the prettiest green you’ve ever seen.

Weather conditions were so perfect – with recent rains, temperatures in the upper 80s the last few days, and bright sunshine – it seemed like the corn was growing even while we were trying to measure it.  My best guess: Much of it was 9 feet tall, but after Saturday, July 3, gave us another perfect growing day, heck, it might be 10 feet tall this morning. 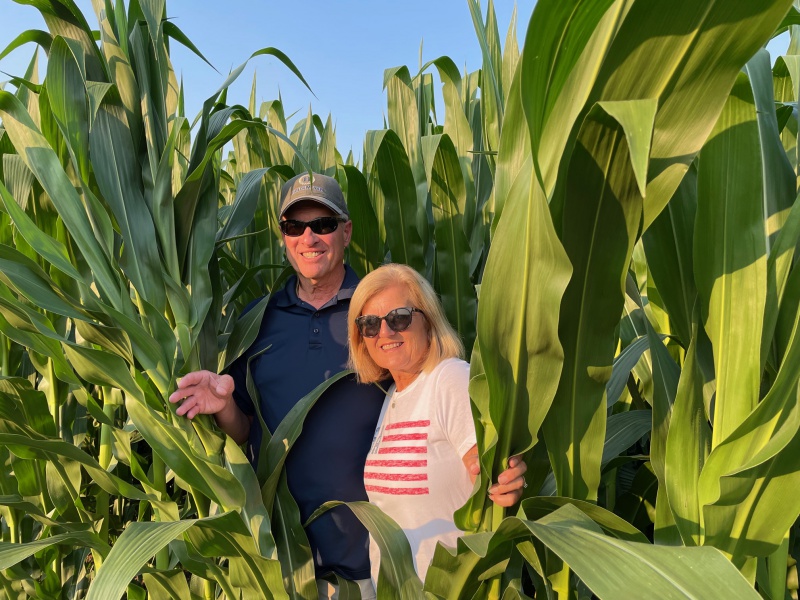 Doug and Karen Lawton stand two rows into one of their cornfields, just northeast of Cooper in west central Iowa.

So it has quadrupled, or even quintupled, the old measure of a good corn crop needing to be “knee-high by the 4th of July.”  Of course, that was the measure 80 or more years ago, before science gave us hybrid corn.

I couldn’t be happier for Iowa’s farmers, especially after what so many like the Lawtons went through in 2020.

They had to farm through a pandemic that threatened their lives. Ag exports tanked because of errant U.S. foreign policy. Much of our area of western Iowa was choked by drought. And then at mid-morning of Tuesday, Aug. 10, a violent “derecho” storm unexpectedly erupted, more like exploded, starting about six miles west of us.

For 45 minutes to an hour, it blasted our area as also began heading east all the way across the central part of the state.  Then it continued all the way to western Ohio. It covered 770 miles in about 10 hours, riding winds clocked at up to 125 mph in eastern Iowa.

The National Weather Service and U.S. Department of Agriculture eventually reported that the storm killed three people in Iowa, destroyed 40 percent of the state’s crops, and caused billions of dollars in property damage and inestimable damage to trees. Its path grew wider as it moved east.  It just awful by the time it reached Cedar Rapids, where every school building in the city was damaged and nearly every mature tree was destroyed. 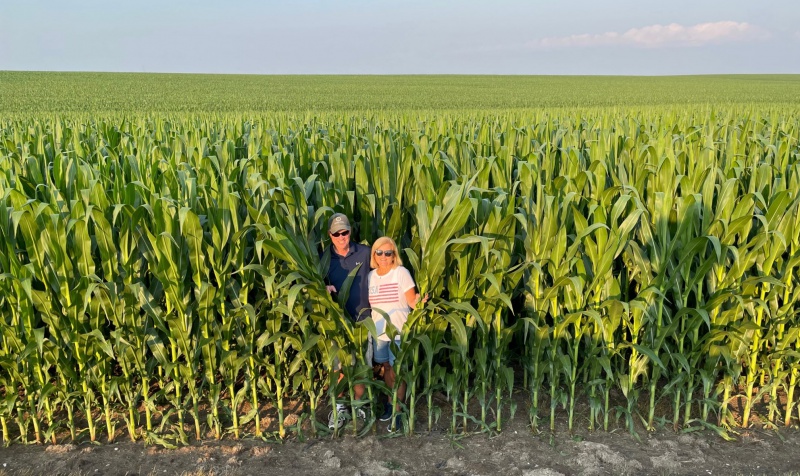 Here’s how it looks this 4th of July at the Lawtons’ farm, a remarkable comeback from the disaster they had on their hands late last summer when 75 percent of their corn crop was destroyed by the “derecho.”

At Lawton Farms, which are scattered across about 10 square miles in the southern half of Greene County, their weather station told them “we had 80 mph winds for 10 to 15 minutes, and winds over 50 mph for about 45 minutes,” Doug said. “We had severe hail damage from over near where the derecho started, on east to our house, and then to the southeast.  Our rain gauge here at home showed three inches,” but the rain was such a wind-driven torrent the gauge surely missed several inches more.

Two huge grain bins that had stood for at least 40 years, the larger one with a capacity of 80,000 bushels of grain and the smaller one 20,000 bushels, were blown off their concrete bases, one of them “pancaked” on the ground.  An intricate “grain leg” elevator system for moving grain up into the bins was twisted and destroyed.  Paint was blown right off of buildings, which were then covered with shredded leaves. The roof on their house was damaged and has just recently been replaced.

Doug and Karen, along with daughter Diana Towers and her children visiting from nearby Jefferson, hunkered in the farmhouse basement for most of the storm, although Doug “wound up going back upstairs and holding on to the patio door on the west side of our house, because I thought it was going to blow off.” If that wind had entered the 100-plus-year-old farmhouse, it might have blown it away.

When the storm finally passed, and the terror seemed to ease, Doug remembers “walking outside, and seeing there were trees down all around our place, I looked out and saw the big grain bin on the ground, and I looked around and saw that most of the crops were flattened.

When you’re his age and see destruction like that at your place, does it enter your mind to throw up your hands and say, “I’m done”?

“Oh, it probably crosses your mind,” he said.

What the Lawtons actually did the rest of that Tuesday was “can sweet corn,” Doug said.

They’ve done that for years in early August with a pal, Matt Schutt.  “Matt had already gone over to Deal’s Orchard and bought a bunch of sweet corn out of their fields, then he got caught there in the storm. When he finally got back to our place, we had all that sweet corn, but we didn’t have any electrical power.  So we cooked the corn on our gas grill, set up tables outside and went ahead with the canning.”

That act of normalcy probably helped everybody.  While it was happening, other family members arrived, Doug directed the clean-up around the yard “and by that first night, we had the place looking quite a bit better.”

In coming days he realized that 75 percent of his corn crop was destroyed.  His soybeans, low-to-the-ground and not as thickly-leaved, were battered by wind and hail, but recovered.

“I wound up harvesting nearly all my beans, but disking-under the 75 percent of my corn,” Doug said. “I’d never done that before – just plowing a corn crop.  A whole lot of farmers around me had to do that, too.  None of us had done it before. We really didn’t know what equipment to use or how to do it.”

Because the Lawtons had good crop insurance – Doug sells it in one of his side businesses – “we came out of all this O.K. financially,” he said. “This was one of those disasters that, if you didn’t have any crop insurance, it probably would have taken you down.  But most of us around here do have pretty good insurance coverage.”

The county-wide corn harvest average here – and only half of Greene County had the severe damage – was down 40 bushels per acre to about 149.

So 2020 was a disastrous crop year, at the Lawtons’ and even worse on many other farms to the east.

So far, it seems like Mother Nature is playing make-up with farmers around here. 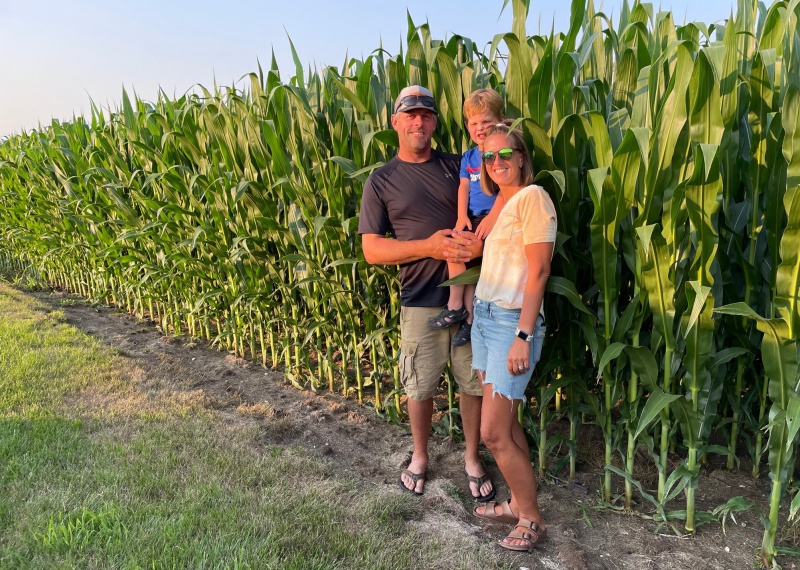 The Lawtons’ daughter Diana Towers, her husband Justin Towers and their son Noah are dwarfed by the corn at their parents’ farm — and these Towerses are tall people!

“Planting season this spring was fast and easy,” Doug said. “I started planting corn on April 22nd, finished that on April 25th, started soybeans on the 27th, and was all done on May 1st.”

He couldn’t have done it much quicker. (It could have been much slower, of course; he can remember one year when “we didn’t get done until about the 4th of July!”)

“The weather was ideal this year,” he said. “There was no rain while we planted.  There were no wet spots to worry about, and no breakdowns that I can remember.”

He had 1,650 acres planted – about half in corn, half in beans – all from Hoegemeyer Hybrids.

Of course, in fields where soybeans were planted this year but corn had plowed-under last year, lots of “volunteer corn” soon emerged.  That required extra spraying – and extra expense – but it’s done.  Doug thinks the bean fields “look pretty good, but they need more rain soon.”

While May and early June were too dry, recent rains have been mostly gentle and nicely-spaced.

Even so, “we’re still way short on subsoil moisture,” he said.

Here’s hoping the nice rains continue another couple months and that we can break a drought cycle which has stretched about three years.

But the conclusion on this Independence Day is that things look good for the Lawtons.

Those of us close to him think Doug works too hard.  Besides farming, he sells all kinds of insurance and also sells real estate.  He needs to get his left knee joint replaced, but otherwise he’s healthy.  And he’d still like to be actively farming for another few years.

“Yeah, Karen is always saying I work too hard, too,” he said. “But I might get bored if I didn’t.”

2 thoughts on “Lawtons’ corn grows while you measure it! Wow, it’s 9-plus feet high on the 4th of July!”