COOPER, Iowa, Feb. 16, 2021 — My wife Carla Offenburger, after six months of hospice care here at home for her cancer, glanced at her reflection in a mirror when she finished showering on a recent day and said to me, “In our wedding vows, when we said ‘in sickness and in health, for better and for worse,’ did you pledge to stick with me ‘in beauty and in ugliness,’ too?”

I had to laugh at that.  But then I gave her honest reassurance that 1) sticking with her to the end is one of the greatest honors I’ve had in my life, and 2) while she may be “sickly thin,” occasionally “wobbly” and “loopy,” as she says, she’s more beautiful than ever in my eyes, heart and mind.

As you always hear from people who are in our situation, there are good days and then there are days that aren’t so good. 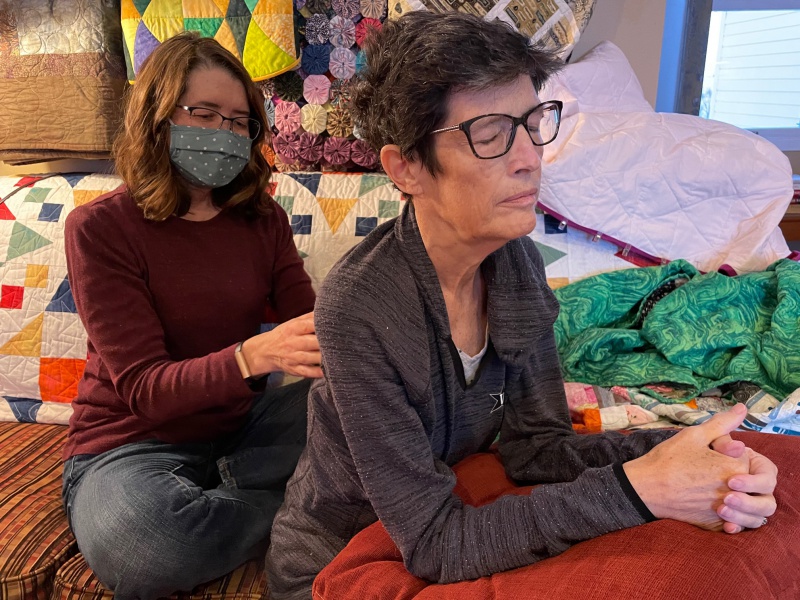 Nancy Teusch’s devotion to her friend Carla Offenburger has included a whole lot of prayer, time and personal sacrifices so she could make afternoon visits for a year now.  Most of those visits have included a 30-minute back rub.

On a Tuesday in late January, I heard Carla tell her UnityPoint Hospice nurse Molly Ritter, of the nearby town of Scranton, that an adjustment of her pain medications was relieving her constant pain, her bowels were not protesting, and “I feel good about life now.”

Less than a week later, Carla was stretched out on the couch, her head in the lap of her mother Sue Burt, who lives with us. Everything O.K.?  “We’re just talking about how unfair it is that I have cancer like this,” Carla said. “I mean, Mom is 85 and very healthy for her age.  You’re 73 and, even though you’ve had cancer, too, you’re healthy.  And here I am, the youngest of us at 62, and I’m the one who is dying.”

She was soon over “this little pity party,” back at her sewing machine, thinking about another couple quilting projects she wants to get done. She’s reading almost as much as ever, although increasingly on her Kindle or iPad, because some books are just too heavy for her.

Damned adenoid cystic carcinoma.  She’s been dancing with it — as she still likes to say — for 12 years now. 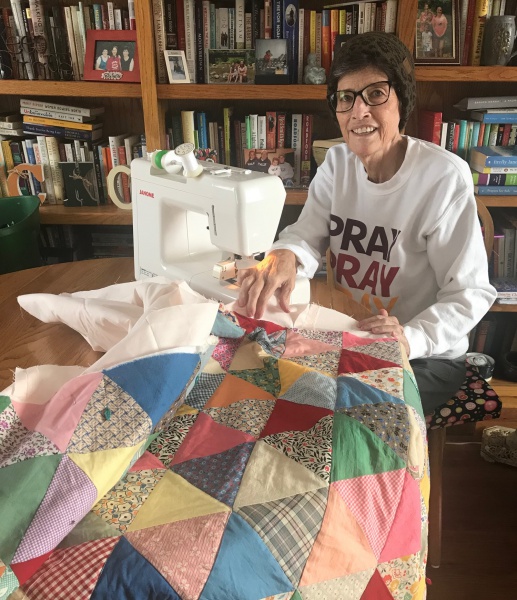 Carla recently finishing one of 22 quilts she has completed since 2015, when it became clear her cancer was advancing. She’s made a quilt for most of the women and girls in her family, as well as some close friends.

After her initial diagnosis in 2010 and radical neck surgery to remove a tumor under her jaw, then extensive radiation, she had five years with the cancer undetectable.  But we’ve known from the start this is an incurable, persistent and slow-growing cancer that will be terminal.

From 2015 on, Carla endured three major surgeries, four or five long-needle ablations to “cook” or “freeze” small tumors, and a lot more radiation.  She tried two different kinds of chemotherapy that did not stop the cancer and had nasty side effects.  By January, 2020, she had lost her appetite.  In the previous months, she’d lost nearly 60 pounds. So she had a tube installed through the wall of her stomach, and for a year now, she has been “eating” thick liquid nutrition four times per day, at first by gravity flow from an elevated bag, but more recently by injecting the nutrition into the tube from a large syringe.

Through the summer of 2020, Carla tried immunotherapy drugs, but as scans in mid-August showed, they were not stopping her cancer.

So at that point Carla, on the advice from our oncologist Dr. Matt Hill at John Stoddard Cancer Center at Iowa Methodist Hospital in Des Moines and our family medical provider Sara Fleecs in Jefferson, decided it was time to stop any more toxic treatment and enroll in hospice care.  The UnityPoint Hospice docs and nurses, in consultation with our own docs, began a care regimen aimed at controlling Carla’s pain, allowing her to be as active as she feels like being, and keeping her as comfortable as possible.

As Fleecs, an Advanced Registered Nurse Practitioner (or “ARNP”), told Carla then, “you can live life like you want, until you can’t.”

That’s basically what we’ve done since mid-August, as you know if you’ve read our previous columns. 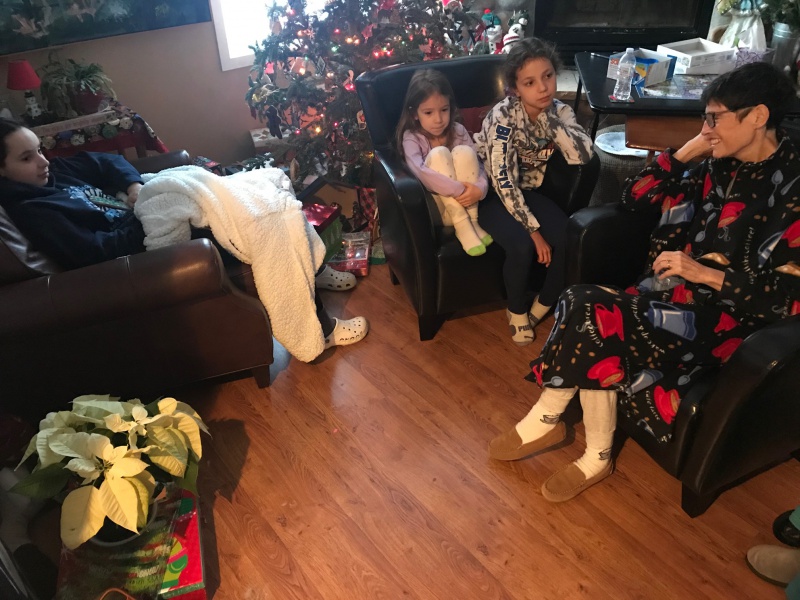 Carla seeing off her granddaughters Lindsay, Audrey and Casey Offenburger, when they were about to leave for the long drive home to Oxford, Ohio, after visiting over the New Year’s holiday.

While always being very careful to protect ourselves against COVID exposure, we still have been able to have visits from our closest family members and friends.  We’ve worked in three visits with our precious granddaughters Lindsay, Casey and Audrey and their parents Andrew & Maria Offenburger from Oxford, Ohio, and FaceTime calls with them once or twice every week.

The friends have been phenomenally supportive.

Douglas T. Bates III — my best pal since we were Vanderbilt University students– his wife Molly and daughter Sarah Bates King drove a round-trip from Centerville, Tenn., to share a long weekend with us.

Nancy Teusch, of Jefferson, has essentially quarantined herself several times, taken COVID tests several times to be sure she was “negative,” and pulled herself away from some of her own family’s gatherings, so that — for months — she could come spend four or more afternoons per week visiting with Carla.  Those visits have always included a calming, relaxing, soothing 30-minute back rub. “As good as those back rubs are,” said Carla, “they’re secondary to Nancy’s friendship.  Just having her here, and all our great conversations, are so helpful.”

Our neighbors and pals Karen & Doug Lawton have been so loyal and good.  When Karen was cooking for the harvest team of a half-dozen or more people working for Lawton Farms last fall, she just added us to her roster and brought us harvest lunches and dinners for weeks.  They’ve teamed up with Carla’s two sisters from Des Moines — Tammie Amsbaugh and Chris Woods — in leading the decorating and un-decorating our farmhouse and yard for autumn, then doing that again for the Christmas season.

And the sisters have also made us two elaborate rounds of “frozen meals” that they prepared fresh in Des Moines, delivered to us in plastic bags with cooking instructions, and organized in our freezers.  They’ve also cleaned our house several times, top to bottom, and by bottom I mean even our rather rough farmhouse basement. 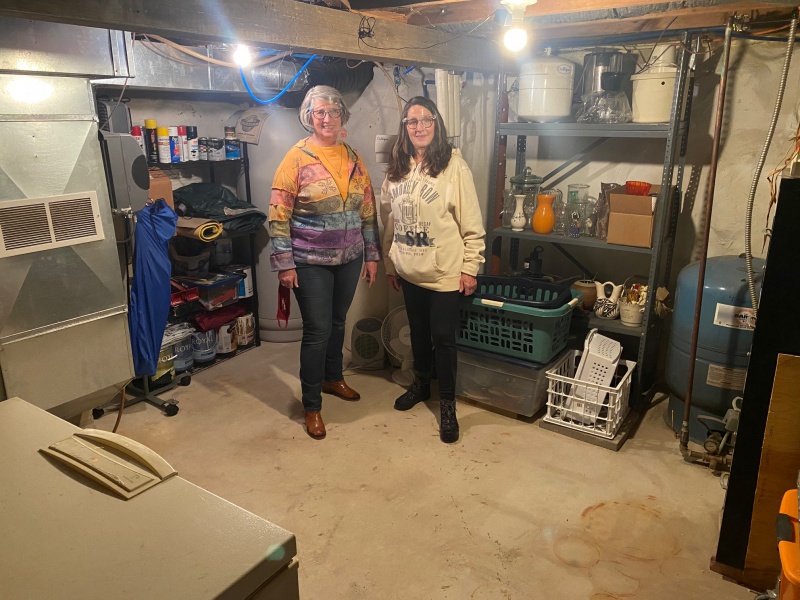 Carla’s sisters Chris Woods and Tammie Amsbaugh after they took charge of that basement.

“I learned a long time ago that when my sisters take charge of something, they take charge, and I just stay out of the way,” Carla said.  “You know, I haven’t been able to go many places — both because of the COVID threat and my own weakness — so Tammie and Chris have run a whole lot of errands for me.  We talk on the phone while they’re doing that, and they send pictures.  I told them I’m now living vicariously through them. So when Tammie drove over to Iowa City and back to get her COVID vaccination, we talked several times that day about it.  Once when Chris was running errands for me around Des Moines, I told her I was hungry for Tasty Tacos from one of our favorite restaurants there.  I told her she had to go there and eat tacos for lunch.  She did, got her tacos, sat in her car and ate them.”

Suzanne Gubanc, of Tipton in eastern Iowa, has sent her own special cards every week — featuring her  outstanding nature photographs and including appropriate poems by favorite poets.  She and Carla have remained tight friends since they were teaching colleagues at Buena Vista University 20 years ago.

Mary Riche, of Des Moines, who besides being a church friend has been like a personal, business and spiritual mentor for decades, has made many visits to the farmhouse and has been much involved the last two springs in Carla’s “garden parties” — doing the hard work of cleaning them up after winter and getting them ready for planting again.

Emily Brewer Ressler, who was Carla’s assistant in the Community Relations office at Greene County Medical Center, is now married and living in Kansas City.  But every two weeks, Emily and Carla have been on the phone for long visits.

We told you in October how Hollie Roberts, of Jefferson, another colleague of Carla’s at the Greene County hospital, came up with the idea of stringing our huge front evergreen tree with Christmas lights — two months early.  She told us to turn them on nightly and we’d all call it “The Loving Tree.”  We’ve still got those lights on every night. 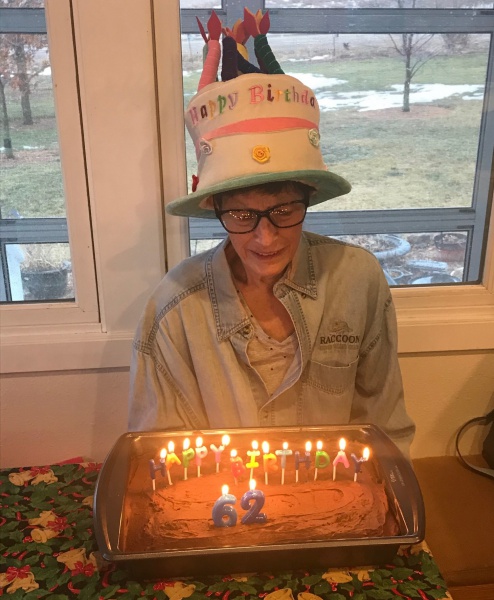 We’re doing O.K., finding at least some enjoyment in every day.  I bring her Mint Patties and Clausen Kosher Dill Pickles on demand.  She’s adding bites and nibbles of other junk food occasionally, too, and that may be helping to sustain her weight at her trim 100 pounds.

From Carla’s two book clubs, from readers of Offenburger.com, from several younger women whom Carla has mentored over the years, from other friends who’ve known me since Vanderbilt U. — and even from Vanderbilt’s extremely busy head baseball coach Tim Corbin, who has been in touch with Carla by personal email or video four different times, even as he prepares the reigning national champs for their 2021 season.  “I can’t wait for Vandy to start playing again,” she said. Our Commodores’ first games are this coming weekend in Nashville, Feb. 19-21, and we’ll be listening.

So here we are.  We don’t know how long Carla will continue living.  Not as long as we’d like, we’re sure.

What is she thinking?

“Don’t anybody abandon me now!” she said, when I just asked her that.

No worry about me doing that, Dear.

26 thoughts on ““Team Carla” helps our leader through 6 months of hospice, enjoying at least some of every day”