COOPER, Iowa, Nov. 25, 2019 – For those of you who are seriously thinking you might caucus and vote for Donald Trump, Bernie Sanders, Joe Biden, Elizabeth Warren or any other presidential candidate age 70 and older, really, you should know better.

The Vilsacks, I harrumphed to myself, should know better.

But maybe they don’t, you know? 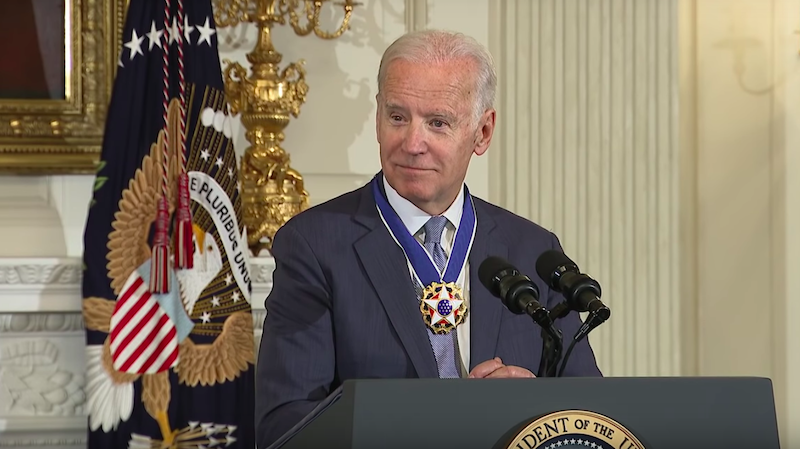 The Vilsacks’ candidate former Vice-President Joe Biden has been around a long time. (Photo is from https://go.joebiden.com)

In fact, there are millions of potential voters out there who have never been in their 70s and who seem unconcerned that this is the oldest field of presidential candidates ever. From what the polls tell us, a whole lot of them are about ready to commit to President Trump, who is 73; Senator Sanders, 78; Biden or Senator Warren, 70.

These septuagenarians may look pretty good on TV, interviews or in print ads. But how long did they spend in make-up before the cameras arrived? How many nips and tucks have they had? Has anybody seen them before they’ve had their first coffees of the morning?

I think it’s time for those of us who do know what it’s like being 70 or more to offer our insights to the younger folks. And so with this column, I am convening the “Not So Super 70s Truth Squad.” If you are 70 or above – or you have helpful observations from dealing with parents or grandparents who are in this age range – then tell us “what to expect from those 70 & above.” You can add your answers in comments at the end of this column, or you can email them to me directly at chuck@Offenburger.com.

I’ll get this started with some personal details.

The problem with electing someone president who is in their 70s, as I told some high school students in Storm Lake recently, is that you’re electing somebody who is at least somewhat like me.

I’m 72, and much of my outlook on life is shaped by the fact that I’m just so damned glad still to be here.

That’s not so bad in itself, but it also means I’m much softer and more emotional than I used to be. Church hymns, fight songs, alma maters and good country songs make me cry.

Sometimes I think I’m too satisfied. I work hard at not being too defensive about the way things are, but I do find myself being suspicious when big changes are proposed.

I realize my values were set in very different times – before the internet and social media, back when everybody went to church, also when Republicans and Democrats were more moderate.

That’s all pretty general. Let’s get more specific about what 70-plus-year-olds are like, based on my experience:

–You learned to type on manual typewriters.

–You can remember when rock ’n’ roll started, but you don’t know a single Top Ten song of today.

–You can remember your family’s telephone number before there were dial phones.

–Your hair is thinning everywhere but your eyebrows, which if you let them go natural, would make you look like Garrison Keillor.

–You must take naps

–You have to write a lot of notes to yourself.

–When you’re asked by someone “Who is your doctor?” you answer, “Which one?”

–Your dermatologist, noting several harmless spots, says, “Congratulations! You’ve reached an age where you have a few barnacles.” And you’re happy for that.

–And you have a first-names friendship with your pharmacist.

–You have a plastic box with day-by-day compartments for all the pills you take, and you also keep a written schedule of what order and times you take those pills.

–Guys in their 70s have separate containers for their Blue Pills.

–You have to get up several times in the night.

–You find yourself wanting to wear white socks most of the time.

–It pisses you off when professional and college sports teams wear “throwback uniforms,” because you thought they were all still wearing those uniforms.

–You’re still tempted to say that something neat is “groovy.”

–You have trouble remembering the difference between “Gen X’ers” and “Millenials.”

–Flatulence isn’t nearly as funny as it used to be.

–You tell others your age that Elizabeth Warren reminds you of “Granny” on “The Beverly Hillbillies,” and they get it.

(As I was going over this list with my mother-in-law Sue Burt, who is 84, she said: “It gets worse in your 80s.” But that wouldn’t be until the second term for Biden and Sanders.)

Now, over to you readers: From your own experience or observations, what’s it like being 70 or more, like four of the leading candidates for president are?

13 thoughts on “So you’re considering caucusing & voting for a candidate 70 or older?”