JEFFERSON,  Iowa, Feb. 4, 2022 — With the news that in her will, the late Alice Hamilton Walters, of Jefferson, left an estate of more than $2 million – and that nearly half of it is being given to the people of Greene County through a couple of foundations – everyone is buzzing about who she was and what she was like.

After her death at the age of 104 last June 22, a line in her obituary pegged her very well: “She left this earth as she lived it – as a wonderful matter-of-fact woman who devoted herself to making the world better for others and making as little fuss over herself as possible.”

Actually, the family added that to her obituary once she was not around to shush them. 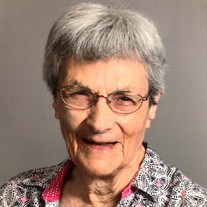 Photo of Alice Walters, at the right, was published with her obituary.

Alice had left her version of an obituary that was about four inches long, did not use complete sentences, had bullet-point items about her biography, and ended with this: “The bare facts – that’s the way I came into this world and that’s the way I’ll leave it.”

Her estate’s attorney David Morain, of Jefferson, said he felt honored to be asked to help get her will finalized, ready for filing and the probate process, which is happening now in Greene County District Court in Jefferson. You can read more about her estate and bequests by clicking here.

“I had not known Alice in my boyhood in Jefferson,” Morain said. “But in adulthood, you’d hear so much about Alice Walters around the community I regarded her as a legend – and I think most people did.”

He began meeting with her about her legal matters a few years ago in her home, and then later when she moved about three years ago to The Gardens Assisted Living in Jefferson.  “Both at her house and at The Gardens, she lived with her big white cat Penny,” Morain said. “That cat was like a piece of furniture.  She didn’t come around to greet you. You had to go over and pet her.”

His client Alice “was very pleasant. She’d talk briefly about her family. She loved to talk about things various family members had done, but that was about all the time she’d take for small talk. Then we’d get right to business.  She was always courteous, but also direct.”

ALICE’S CLOSEST SURVIVING RELATIVES are a niece and two nephews, Ann Hamilton Campbell, a retired college teacher and a former mayor of Ames who served three terms; Bruce Hamilton, of Baltimore, Md., who taught economics at Johns Hopkins University, and Mark Hamilton, now of Des Moines, the CEO of Times Citizen Communications, which has the newspaper and radio station in Iowa Falls.

Their father was Carl Hamilton, Alice’s brother. Carl and Alice were the only children of Bert and Imogene Hamilton, who were living on a farm near Glidden, between Jefferson and Carroll.  Carl graduated from Glidden High School in the early 1930s and Alice followed in ’33, and both went on to Iowa State College in Ames, where they were high achievers.

Carl graduated in journalism in 1936, went on to become an assistant to the U.S. Secretary of Agriculture in Washington, D.C., then in 1948 moved to Iowa Falls where he bought control of the Iowa Falls Citizen newspaper.  He ran it until 1961, when Iowa State University President Robert Parks hired him as a professor of journalism and eventually as vice-president of information and development.  He became one of the most widely-known people in Iowa, using his connections to help raise the millions of dollars that went into building the Iowa State Center with the theaters, coliseum and stadium. He retired in the mid-1970s and died in 1991.

Alice graduated in home economics.  During her time at Iowa State, she met student Duane Walters “at a mixer in the Methodist Church basement in Ames,” according to the family’s enhancement of her obituary, and married him in 1939 – even though both knew he was terminally ill with Hodgkin’s disease. They moved to Texas to avoid Iowa’s cold weather and seek special treatment for Duane, but he died in 1943.

“Alice never remarried,” Mark Hamilton said. “She was a good-looking woman and she had a few relationships later in life, but she said ‘it just never clicked’ for her again.”

She returned to Iowa, worked for a time in Des Moines as a statistician with Pioneer Seeds, then began a long career as a home economist for years with the ISU Extension Service for Greene County in Jefferson.  And she was one of the county’s best volunteers for about 70 years.

HER WEALTH?  From what we know and imagine, Alice Walters accumulated her sizable estate by inheriting some, working hard, saving, investing wisely and living frugally.

“I don’t think she thought of herself as particularly generous,” Mark Hamilton said. “She lived 60 years in the same house that her father built for her on South Olive Street in Jefferson, and it was close enough that she could walk nearly everywhere in town. She had fun.  She traveled a good bit – Africa and Alaska that I remember – but she wasn’t one to have cocktail parties.”

You’ll note that she left generous donations to both Iowa Public Television and Iowa Public Radio, because she was an avid follower of both.

“I talked with her about that, and she left a larger amount for public television,” said Ann Campbell. “She had thought that through and said she was pretty sure it’s more expensive producing good television, because of needing all the pictures, than it would be producing the radio shows, because they just have sound.”

Mark Hamilton said Alice made frequent donations to IPT and IPR for years. “When public television would be having their ‘Friends’ campaign and people would be calling up and donating $25 or $50, Alice would call in and pledge a donation of $5,000 or $10,000,” he said. “The person taking the pledge would be surprised and would say, ‘Well, ma’am, would you like to set up a payment plan for that?’ Alice would say, ‘No, I’m just going to write you a check and send it.’ ”

Besides all the local philanthropy in her estate, Alice also donated $50,000 about two years to help with the fundraising campaign for the new animal shelter that is to be built in Jefferson. 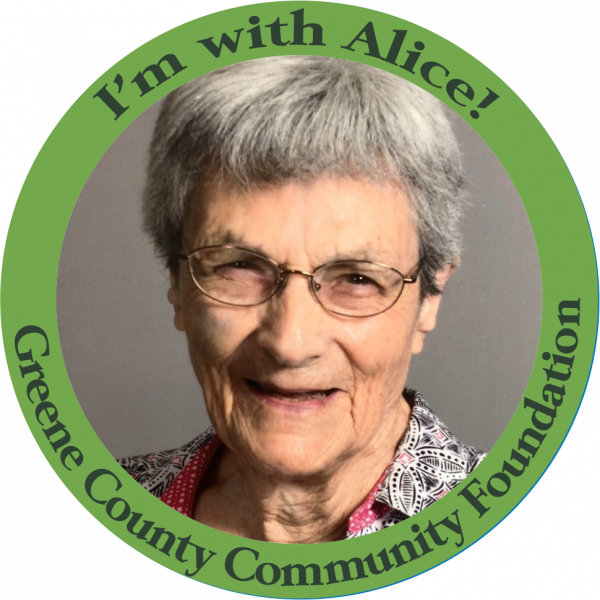 Here’s the button the Greene County Community Foundation is now using in the fundraising campaign. It was designed by Jen Badger at ShineOn designs in Jefferson.

DON VAN GILDER, past president of the Greene County Community Foundation, said he “first came to know Alice back in 1958 through 4-H,” where she was one of the adult leaders and he was a participant.

“She was what I would now call a stern but loving presence,” he said. “You always knew where she stood on something, and it was probably where you ought to stand, too. She was a forever presence.

“I think for people around Greene County of a certain age – like about my age – if you asked them to name any one specific person who influenced their lives, a majority would say Alice Walters.”

He later knew her around the First United Methodist Church, where both were members and she for years was the volunteer treasurer.  She volunteered in many other ways, too.  “I remember her walking around town delivering the Methodist Church newsletters,” Van Gilder said, “and she’d usually write a little personal note on each newsletter before she dropped it off for the families.”

KAREN SHANNON, the current president of the Greene County Community Foundation, said she first became acquainted at the elementary school in Jefferson.  Walters volunteered for about 20 years as an aide helping kindergarten teacher Sherri Schwaller.  Then Walters and Shannon became closer at the Methodist Church.

“One time when Alice was 99 years old, she mentioned she’d never bought a loaf of bread in her life – that she always made her bread,” Shannon said. “And at that point in my life, I’d never known anything about baking bread.  So I made an appointment with her, brought my two daughters and we met in the church kitchen one Saturday morning.  Alice taught us all how to bake bread.

“One thing I still remember is that Alice didn’t measure a thing.  She’d take a pinch of this, and a handful of that, dump it all into the bowl, and somehow it came out perfect!”

Although there was a wide difference in their ages, Shannon said she “always enjoyed any time I got with Alice, especially chats over coffee.  She was a great lady.”

WHEN ALICE TURNED 100 YEARS OLD, the family helped her make a big, fun deal out of it.

They ordered a big canopy tent to be set up on the yard on the west side of the Greene County Courthouse in Jefferson. There was festive music.  There were bus or van rides out through the western half of the county, so people could see sites that were important in Alice’s life.

And they hired an ice cream truck to be parked adjacent to the tent, with people able to order up cones or dishes of whatever ice cream treats they wanted!

One thought on “Who was Alice Walters? Our great benefactor a “matter-of-fact woman devoted to others””