And so are a lot of you out there – my fellow Baby Boomers, hep cats, hippies, yippies, yuppies and others.

We are people who were born or came of age in the 1950s, ’60s and ’70s, three decades that changed the world, most of us in it, and generations to come, too.

We are accused of being “stuck in the ’60s.” We’ve hung on so long in leadership positions – generally, far too long – that it’s said we “refuse to leave the stage.” The three decades have been called “the greatest time to grow up,” and “the best time to have gone to college,” but some also add, “if you survived it.”

But now it’s official, we’re history.  At least around here in west central Iowa we are, because starting this Saturday, July 3, the Greene County Iowa Historical Society is launching a huge new museum exhibit about us: “Dig it! The 1950s, ’60s & ’70s.” 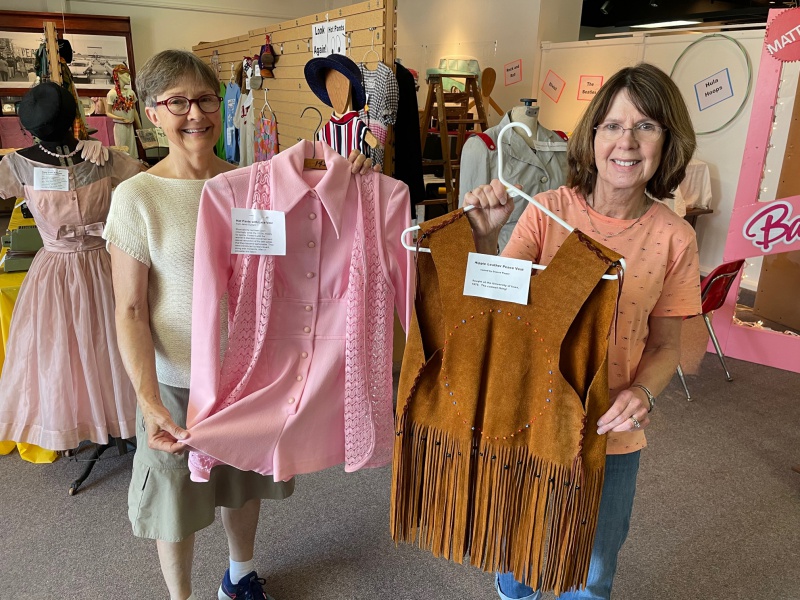 Mikki Schwarzkopf (left) and Dianne Piepel, both of Jefferson, are shown here with a couple of the clothing items on display – a pink “hot pants” outfit that Mikki is holding and a fringed “hippie vest” that Diane bought in a “head shop” in Iowa City in the 1970s.

The exhibit, designed & constructed by historical society members & researchers Mikki Schwarzkopf and Dianne Piepel, with help from Jan Durlam and several others, features treasures, artifacts, and a lot of kitschy reminders of what life was like and how it changed during those 30 years.  Nearly all items in the huge display have been loaned to the historical society by current residents of Greene County.

For those of us who lived in or through those three decades, we’re going to see a whole lot of reminders about what our lives were like, and opportunities to re-assess and re-evaluate how we all did.

For those who are younger, it’s an opportunity to come browse, listen and get new understandings of why your parents or grandparents are like they are.

For the July 3 debut, the museum will be open at 9 a.m. that morning for browsing of the new exhibit, as well as other displays that have been longtime favorites.  The museum will remain open for additional browsing until at least 1 p.m.  Admission and refreshments are free. 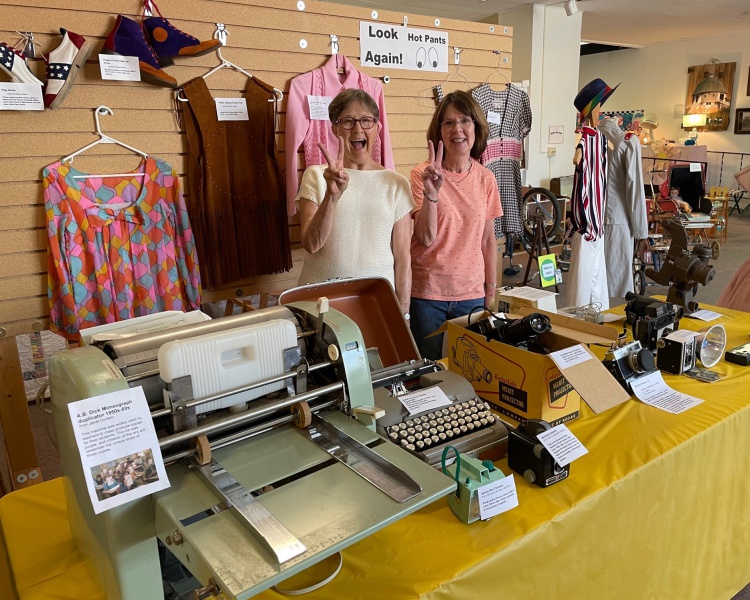 Schwarzkopf and Piepel with a display of some of the antique machines and cameras that were part of life from the 1950s forward, for 30 years or so.

We’re going to talk about all this, too.

At 10 a.m. on Saturday, the historical society will host the first of three or more panel discussions to be held over the next year.  They are intended to recall and reflect on the events that happened from the ’50s through the ’70s, and consider how some of them continue to shape our lives and culture today.

I’m the historical board member who will be moderating at least this Saturday’s discussion.  Panelists will include notable Greene Countians and a few alumni — Rick Morain, Andy McGinn, Rolfe Blaess, Terry Rich, Carole Custer, Quentin Minnehan and Alan Robinson.

We will attempt a broad overview of that historic era. There’ll be storytelling, and some live music.  McGinn, the editor of the Jefferson Herald, is going to share his research on the exact time when rock ’n’ roll music first arrived in Greene County.

Questions and observations from the audience will be encouraged.

You can learn more about all this at our Greene County Iowa Historical Society website, by clicking here. 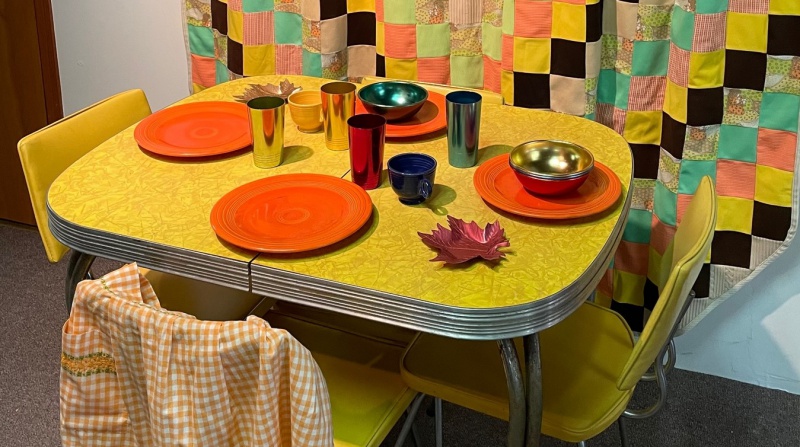 Sure signs of the 1950s – or was it the ’60s? – a yellow formica kitchen table, Fiestaware dishes, aluminum cups & bowls, and even ash trays!

Two additional panel discussions are now being planned for fall and winter.  One will go much deeper into the music of the three decades – how it evolved, the bests & worsts, why so much of it is still popular today – and with live performances and explanations between songs.  The other panel already being put together will focus on the major movements that emerged during the 30 years, including the civil rights, peace, student, feminists, Native American and farm movements, and maybe others.

Now, to start you all thinking how you might contribute, take time to read through the following reminders about major events, happenings, trends and transformations that occurred during those three decades.  Keep in mind, this is a quick list – I’ve forgotten many others, I’m sure.

Think of all there is to consider from the…

We started that decade with eight high schools in Greene County, and we finished the decade with the first of the life-changing school consolidations. (Now there are two high schools.) The Churdan Gremlins made it to the Iowa high school girls state basketball tournament. And people still talk about the 1952 Jefferson High School football team that went 9-0 and was the only prep team in America that held all opponents scoreless. The Korean War erupted and concluded, the Soviet Union launched the space satellite “Sputnik” and U.S. schools scrambled to catch up in science.  Rock ’n’ roll revolutionized the music world – and, again, we’ll pinpoint the exact time when that new music arrived in Greene County.  Nearly all of us got TVs, and some offices and even homes got air conditioning.  The county’s centennial was held in 1954.  U.S. Highway 30 was moved from its historic route across the county to a new highway outside all our towns; many businesses died as a result, although a few new ones were created, too. The countryside started looking a little different with the federal government creating the “Soil Bank.”  The Iowa Hawkeyes played in two Rose Bowl football games, in ’57 and ’59, and won both. Our Jim Doran, who didn’t even play football in high school, was starring as a receiver for the Detroit Lions. And we could barely believe it was happening, but in 1959 Soviet Premier Nikita Khrushchev, leader of the enemy nation in that Cold War era, was motorcaded across southern Greene County on his way to a historic visit to learn about agriculture on the farm of Roswell and Elizabeth Garst outside Coon Rapids. Then, as the decade closed, the Cuban Revolution broke out. And there was so much more that led us into the…

This decade started out with so much life and fun.  The Beatles!  Vatican II!  Birth control pills! Scranton High School’s Bruce McDonald ran wild in track.  We learned that there was going to be something called the “Mahanay Memorial Carillon Tower” be built right on the courthouse square! But then we went through a half-dozen years that seemed to threaten the stability of life as we knew it.  There were the assassinations of President John F. Kennedy, Malcolm X, Martin Luther King Jr., and Robert F. Kennedy. The Civil Rights movement – with help from churches and an aroused younger generation – began confronting racial inequality and oppression with huge rallies, marches and protests, and the nation began to change. The music got angrier. The younger generation of Americans also went to war in Vietnam and other countries of Southeast Asia; the fighting lasted much too long, and the U.S. became dangerously divided over how long to continue a fight that wasn’t really ours. Recreational drugs became a thing.  The Beatles began their break-up. And watching over it all as the decade ended was the Man on the Moon.  And so we advanced, hoping for calmer, better times in the…

While the Vietnam War dragged on for five more years before it ended, America was seeing robust economic growth – including on Greene County’s farms, where productivity and profitability both mushroomed.  The first hog confinement buildings were going up, and small new refineries began producing “gasohol.”  The Iowa State Cyclones made it to their first football bowl game.  There was the legendary blizzard of April, 1973, in which most of Iowa received more than a foot of snow, and some locations measured more than 20 inches, schools closed for a week – and the Iowa National Guard used its helicopters to drop bales of hay to cattle stranded out in fields. In 1974, President Richard Nixon resigned, taken down by the Watergate scandal.  In Iowa, the Democratic Party created – and the Republican Party soon joined in on – the Iowa Political Caucuses, and everybody in Iowa shook hands with Georgia governor Jimmy Carter.  In local high school sports, Scranton High School’s Rosemary Holden (now Hoyt) became one of Iowa’s greatest prep track stars before going on to run for Iowa State University.  And Jefferson High School’s Jazz Band developed a national reputation under the direction of teacher Jack Oatts, who brought some of America’s leading jazz players to the school to lead clinics and festivals.  In 1978, Paton native Loren Shriver – who’d been a combat pilot in the Vietnam War – was selected to become a NASA astronaut and eventually was on three space missions.

See you at the museum.

You can email the columnist at chuck@Offenburger.com or comment using the handy form below here. More photos from the new exhibit are shown below here. 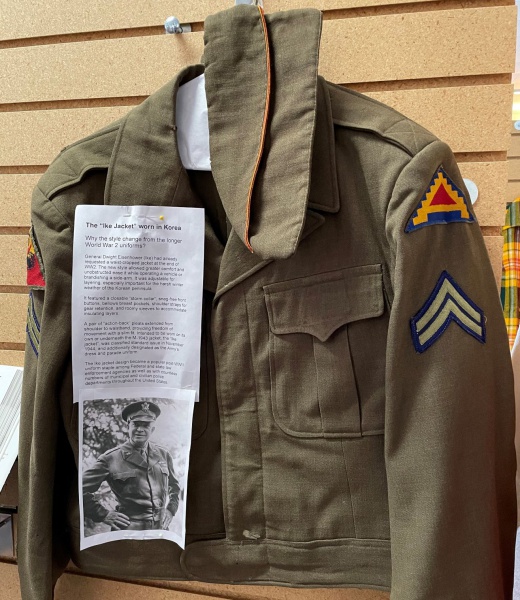 An “Ike jacket,” which became very popular with soldiers in the Korean War in the early 1950s, after it had been made by popular in World War II by General (and later U.S. President) Dwight “Ike” Eisenhower. 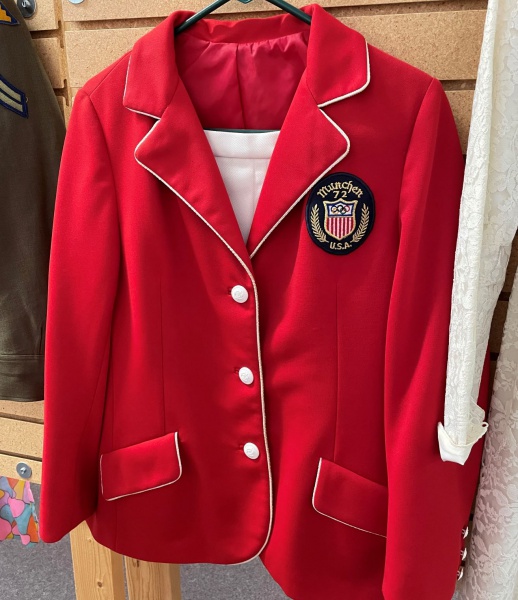 Doreen Wilber of Jefferson, Iowa, was the Olympic gold medalist in archery in the 1972 Olympics in Munich, Germany, and this is the outfit she and other Olympians had for parades and formalities. 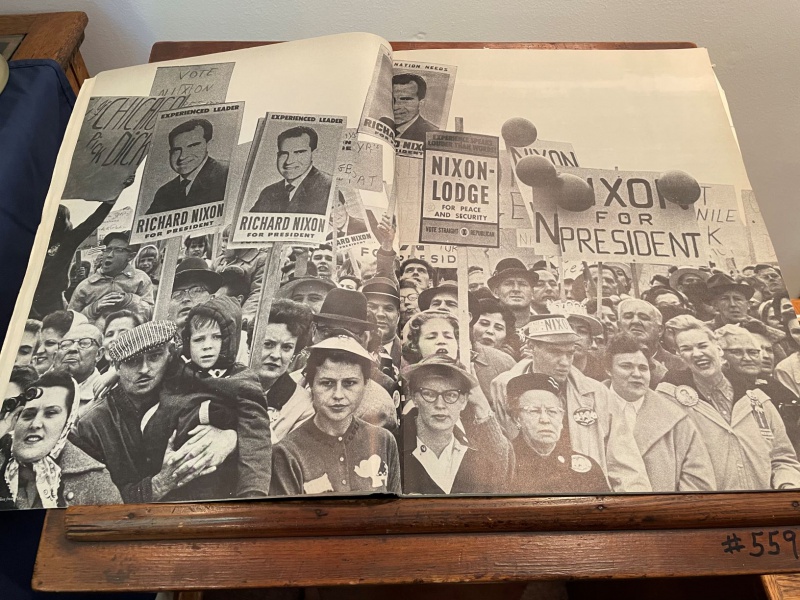 Ah, yes, this era also included the Nixon years, which brought a grand “re-opening” of U.S. relations with China, but then the Watergate scandal, impeachment proceedings and a presidential resignation. 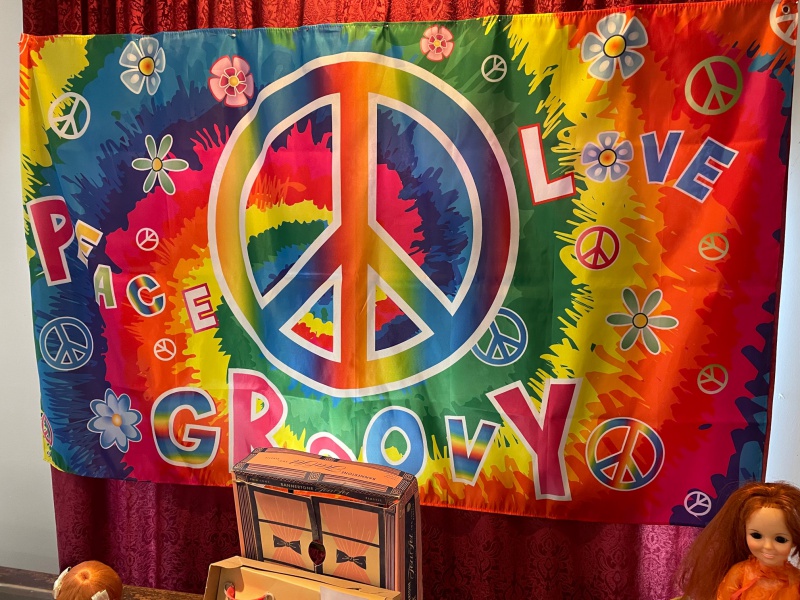 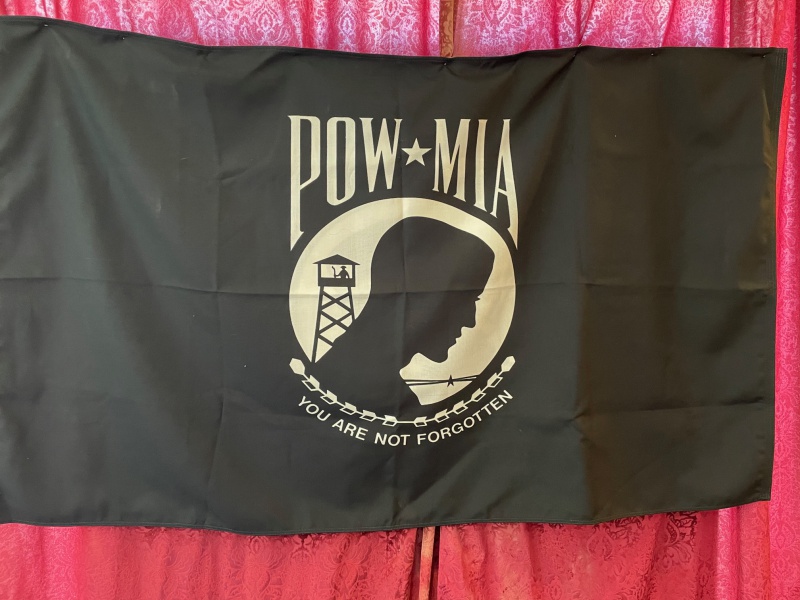 A POW-MIA flag that reminds us there are still soldiers unaccounted for from the Vietnam War.