STORM LAKE, Iowa, Sept. 16, 2016 — Thoughts you think while you watch the St. John’s Johnnies, the NCAA DIII football juggernaut from Minnesota, run-up a 33-0 halftime lead on your Buena Vista Beavers  on a perfect September Saturday afternoon in the stadium on the lakeshore:

— St. John’s plays football so well they make it pretty. The big linemen block so well it’s like they freeze the defense. Their own defenders smack you good, then help you up.  The quarterback dances in the pocket, pumps, pumps again and throws perfect spirals.  The receivers catch passes without breaking stride, and they indeed stride.  Next thing you know, 33-0, enroute to 40-17.  Oh, well, that was a heck of a lot better than the other two times these teams have played, 56-7 last year and 61-0 in 1976. 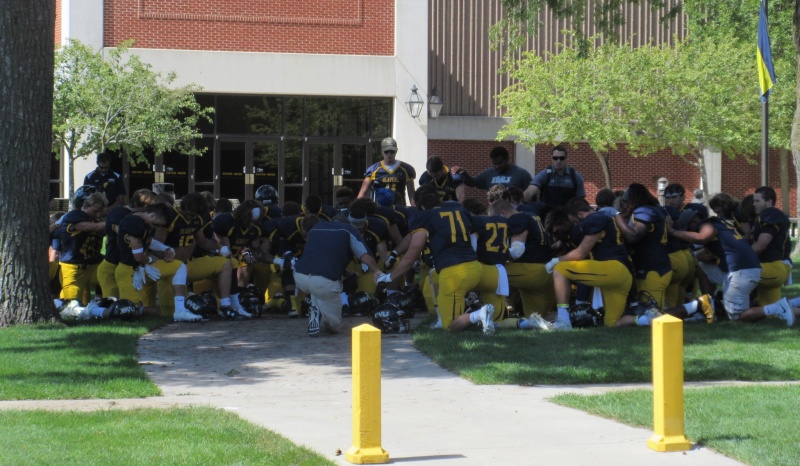 It’s probably a good idea for opponents of St. John’s in football to pray, like the Buena Vista Beavers did before last Saturday’s game in Storm Lake.

— If my count was right, BV has 20 cheerleaders.  I didn’t notice if they did it on Saturday, but BV has the best cheer in the Iowa Conference, the famous “Beaver Train.”  It’s a classic old “locomotive” cheer in which the cheerleaders form a line facing left, put left hands on the left hip of the cheerleader in front of them, swing their right arms like a locomotive’s drive rod while chanting: “B-E-A-V-E-R-S!” Then they jump around to face right, right hands on right hips, swinging left arms and chanting, “B-E-A-V-E-R-S!”  Repeat, faster and faster.

— I’ll never forget the time, in 1999 or ’00 when I was teaching journalism at BV, I had a student Kelly Maricle who sang the National Anthem  before a Beaver football game and she gave just a wonderful performance.  Late in that game, another of my students J Heathcote (“That’s ‘J’ with no period,” he made clear), a wide receiver, made several key catches as BV rallied to upset Coe College. When I opened the next class, I asked everybody what the best part of Saturday’s game had been. Two or three raised hands and shouted, “When J caught all those passes!”  Well, I said, that was pretty good, but wasn’t what I was thinking. Then J Heathcote raised his hand, I called on him and he said, “When Kelly sang the National Anthem.”  Right, I said. You’ve got to love DIII football, you know?

— Heathcote, by the way, had a hit with a feature he wrote on the sports pages of our student newspaper, “The Tack” (which had the motto, “The newspaper with a point”).  So anyway, J gave readers a glimpse inside the BV football program with his mini-column, “Far-out with the wide-out.”

— Thinking BV football in that era brings to mind Ben Smith, our All-American running back.  The summer between his junior and senior years, he was working with the buildings & grounds staff on campus, so my wife Carla Offenburger and I saw him frequently.  He decided that, like us, he was going to ride a bicycle on RAGBRAI that late July.  Experiened cyclists, we told him he better get on a bike and do some training.  No need, he said, and he really was about as finely conditioned physically as a human being could be. Still, we suggested, maybe you ought to ride a few miles before you go on RAGBRAI.  Nah, he said, he could handle it.  (He rode three days and then retreated to campus because his ass was so sore.)

— BV’s football coach back then was Joe Hadachek, a big, ruggedly-handsome chap who looked like he’d come from Central Casting when BV put out a call for someone to portray leader of gridiron warriors.  I loved the way Hadachek handled the team, and BV was a consistent winner in those years.  But the moment I knew I really liked him was in the middle of a class day, when I saw him hurriedly walking across campus, holding a book flat in one hand with his other hand cupped over it like he was protecting something.  “What’s up, Coach?” I yelled.  He answered like he was suddenly a 10-year-old boy again,  overwhelmed with wonder.  “Look at this bug — I’ve never seen anything like it!” he said, giving me a quick glimpse at it. “I’m taking this over to Science right now to see if they can tell me about it!” 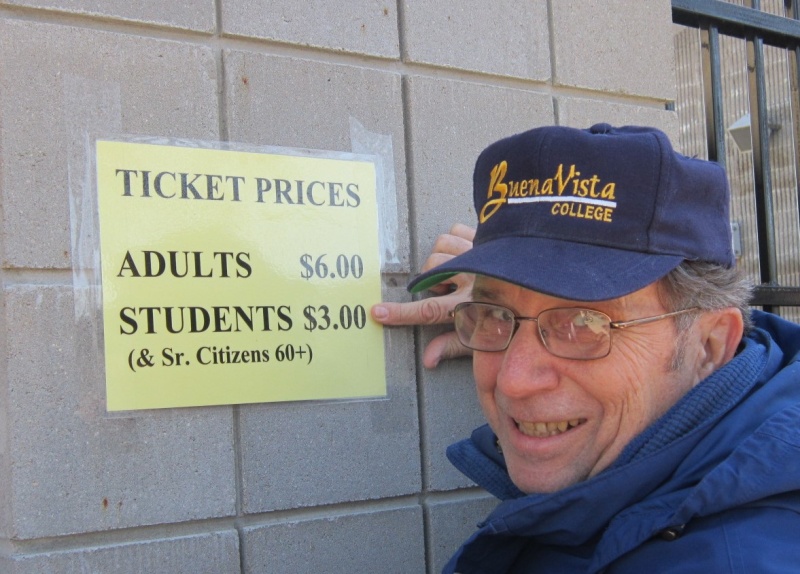 The columnist, getting in cheap at a Buena Vista University football game on the lakeshore in Storm Lake.

— So, did you see the news from the Iowa Conference, that a new member institution was added over the summer and tomorrow plays its first football game in our storied 94-year-old league?  Are you ready for this?  It’s Nebraska Wesleyan University!  Nebraska Wesleyan in the Iowa Conference!  That means we now have BV, Coe, Central College, Wartburg College, Loras College, the University of Dubuque, Luther College, Simpson College and Nebraska Wesleyan.  The “Prairie Wolves,” as NWU calls its teams, should be a nice addition. It’s a fine DIII school in Lincoln, a classic liberal arts college.  Having our Iowa Conference teams going out there to play will give our member schools new student recruiting territory.  Wesleyan’s first conference football game tomorrow is against Wartburg.

— That reminded me that BV once played in another conference that had teams from out of state.  That was in the 1946, ’47 and ’48 football seasons when the “Dakota-Iowa Conference” operated for football only, and included BV and the late Westmar College from Iowa along with Yankton College, Dakota Wesleyan College and Huron College from South Dakota.  Understand, BV did not give up its membership in the Iowa Conference then; rather, the Beavers played in both leagues! Two ol’ pals of mine who played for BV in those years, Dick Utter of Storm Lake and Bernie Saggau of the Iowa Great Lakes, shared some tales from that time when I called them this week. “Scheduling got a little crazy with us playing in two conferences,” said Utter. “I’m pretty sure we had one stretch where we played three games in one week’s time. When I think back on that, we must’ve had a weather postponement that caused that.” Saggau recalled that in those post-World War II years, with lots of older veterans back playing, eligibility wasn’t always monitored well. “Dakota Wesleyan had a guy play six years before he finally got caught,” Saggau said. “I remember him being a big, rough character!”  Maybe the best measure of the two different leagues was the ’48 season, when BV won the Dakota-Iowa Conference with a 3-0-1 record, but got eighth in the Iowa Conference with a 1-3-0 record.

— So, anyway, BV in recent years has had almost suicidal schedules, front-loaded with games against really rugged teams from Minnesota and Wisconsin. This year they opened with a 42-33 loss at Mayville State University in North Dakota, then faced St. John’s here last week.  It doesn’t get much easier.  On Saturday, the Beavers go to Pella to play the 2-0 Central Dutch, who opened with a 50-49 win over Whitworth University in Spokane, Wash., and last week knocked off perennially tough Augustana College in Rock Island, Ill., 45-17.

I think this is a good time to remind myself that small college football is always fun, sometimes it’s just more fun than others. And you always get your money’s worth.

One thought on “Football at Buena Vista & other small colleges is fun (and a bargain, too!)”