And this isn’t about politics.

When I stomp my feet, publicly call you out, or walk out on you, I want you to understand where I’m coming from and why I’m in such an unfriendly mood.

You are on your phone talking, texting, checking Facebook, tweeting, Googlizing (it’s a word), or doing whatever seems to be more fascinating than interacting with me (and others) who are physically with you.

I’ve tried for years, it seems, to be tolerant of this ever-growing problem.  I’ve tried to pass it off as a short-term issue.  An “emergency” situation. 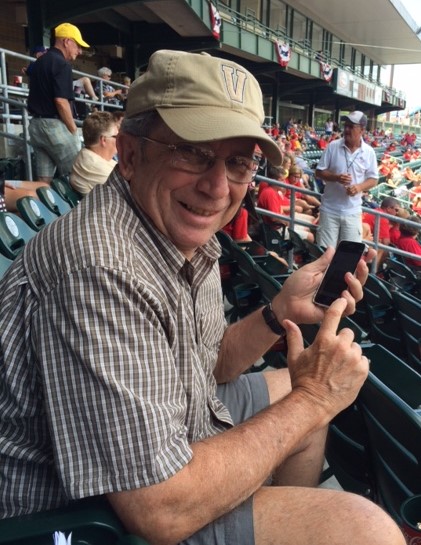 Chuck Offenburger at the high school state baseball tournament, right before he was told to put away his cell phone and watch the ball game.

It will no longer matter to me if you are “looking something up” to share.  I no longer care if you have been “waiting for a call about your plans for tomorrow or next week.”  Or “checking in with your kid, or spouse, or partner, or mother.”  Or, or, or.

For goodness sake, love the one your with, folks!

It used to be that we could be away from our family members and friends for hours ,or even days, without “checking in.”  I’m old enough to remember those days.  So are you!

Today, it seems like most of us can’t go two minutes without having our phone out for something more important than what or who is right in front of us.

A few years ago, we’d have healthy debates and lively discussions on some obscure topic or date.  Now we are just pulling out our phones to find the quick answer.  Let’s get back to the healthy debate on who won that last national championship, or what band is going to be at the state fair.  Now, we stop the conversation before it ever begins.

We are becoming a bunch of non-conversational, self-centered children.  And so are our children. 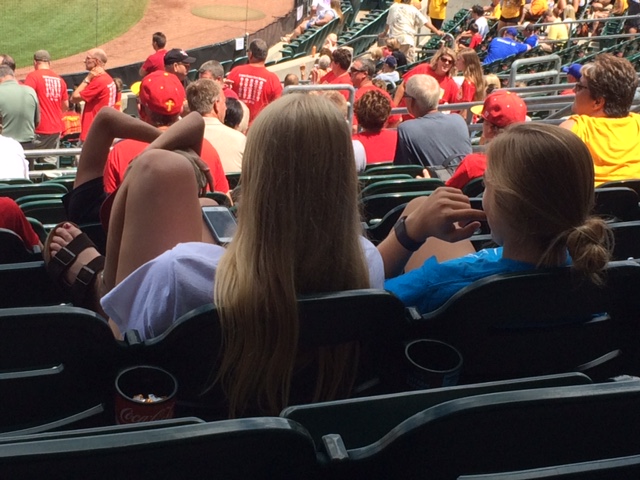 Everybody’s got their phone out but who’s actually talking?

Go to any public place and an equal amount, if not more, people will be on their electronic device “engaged” in something that isn’t engaging at all.  And around them is a ball game, a show, a family gathering, a child, a spouse, a friend – you name it.  We are missing out on living the life we work so hard to enjoy.

Oh so many years ago, Chuck and I were part of an Oprah Winfrey show audience in Chicago, and we were not allowed to take anything into the studio.  No purse, no pen, no reporter’s notebook.  Why?  The producers wanted all eyes on Oprah.  They didn’t want an audience full of people looking down in their laps, or in their purses, or writing notes.  She had it so right.  And she would be so into a “get rid of that phone” movement, I think.

Now, anywhere you go, folks aren’t paying attention to the ball game, the concert, the lecture, the debate, the party!  We have our eyes on a small device we are holding in our hands – instead of holding the hand of someone with us.

I’m putting almost everybody I know on the list of people I might well unfriend over this persistent phone rudeness.  My husband Chuck, my sisters Tammie and Chris, my friends, my co-workers.

However, my mother Susie Burt is safe.  O.K., so she doesn’t have a smart phone, which makes her pretty smart in my book.  I wouldn’t unfriend her anyway – because, well, she wouldn’t ignore me or others. 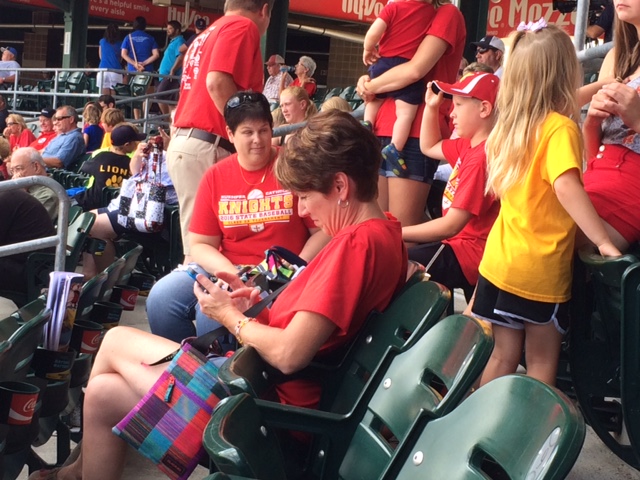 Another fan at the baseball tournament, looking up something or other.

You might be asking, why now?  I’ll tell you why now.

I recently travelled with my sisters and mother for a weekend getaway, and on the way home, it hit me that the amount of phone time we three sisters had engaged in was embarrassing to me.  (And yes, I was guilty as charged.)  Wonderful “family time” was split with phone time.

At a recent shower I hosted for my niece Perri Woods in Des Moines, I actually made a shower game out of putting an empty bowl next to the bride-to-be and told guests that every time a phone was pulled out and used, the guilty party owed the bride a dollar.  I think she made about 15 bucks!  Incredible.

When spending last Saturday at the Iowa High School State Baseball Tournament in Des Moines, there were dozens around me with their eyes in their lap, instead of on the field.  And that’s when I spotted the banner on the fence in left center field:

“One text or call could wreck it all.  Play it safe.  Hang up and drive.”

I read that, looked around me and it hit me – wrecking it all is more than the car accident waiting to happen, as the banner was indicating.  (This, of course, could be an entirely different column – the one where I would expand on all the distracted drivers coming toward me in the other lane, just one motion from hitting me head on.  But I digress.)

So there you have it – I’ve warned you.  Be ready.  I might be unfriending you soon.  I hope it’s only temporary.

Don’t wreck it all.  Love the one you’re with.  Enjoy the moment.  Carpe diem.

Oh, and one more thing — go ahead and skip answering my call or text when you are with others.  I can wait.  Those you are with deserve your full attention.

3 thoughts on “She’s not unfriendly, however she might well “unfriend” many of us!”