JEFFERSON, Iowa, May 5, 2016 – The Republican Party here in Greene County apparently is not acknowledging that there is a GOP primary race for the 4th district seat in the U.S. Congress.

In early April, Greene County Republicans held their annual “spring rally,” and incumbent U.S. Rep. Steve King was invited as the featured speaker.  When the Central Committee put out a news release before that event, GOP county chairperson Roger Olhausen was quoted saying, “The committee thinks that the people of Greene County should hear about his (King’s) commitment to Republican ideals, and that he deserves the opportunity to represent us again.”

On Wednesday morning of this week, King’s opponent in the June 7 primary election, State Senator Rick Bertrand, of Sioux City, came to meet the public in Jefferson.  And not a single Greene County Republican showed up at Homestead Coffee & Bakery.  Not one.

The only non-media person attending was Doug Stout, of Waukee, and thus not a voter in the 4th district, who worked as a senior policy advisor to former Congressman Tom Latham, now retired.

Otherwise Bertrand’s audience was Bill Petroski, who is covering the primary race for the Des Moines Register; Coltrane Carlson, newsman for Raccoon Valley Radio here, and me. And remember when you read the rest of this, that in the past I’ve supported Congressman King’s opponents – most notably former Iowa First Lady Christie Vilsack, a Democrat whom King defeated by 8 percentage points in the 2012 general election.

With Petroski, Carlson and I peppering Bertrand with questions for an hour, we learned a lot about him.

He is a 46-year-old native of Sioux City, a graduate of Bishop Heelan Catholic High School who went on to a year at Iowa Central Community College in Fort Dodge and then graduated in political science from the University of Northern Iowa.  He spent five years after graduation working as a marketing director for bio-tech firms in New Jersey and Georgia.  In that time, he and his wife, Sioux City native Tammy Bailey Bertrand, began their family and decided they wanted to be back in Iowa.

They now have three children and live on a small farm on the east edge of Sioux City, where they share in a cow-calf livestock operation with Rick’s parents Bob and LuAnn Bertrand and Rick’s brother Russ Bertrand.

“I got started in development when a group of us in Sioux City had a goal to raise up our community, clean it up, build some things to help attract more young people,” he said. “Sioux City has really become a boom town,” with several major companies expanding their operations there, “and we’ve tried to be a part of that.” 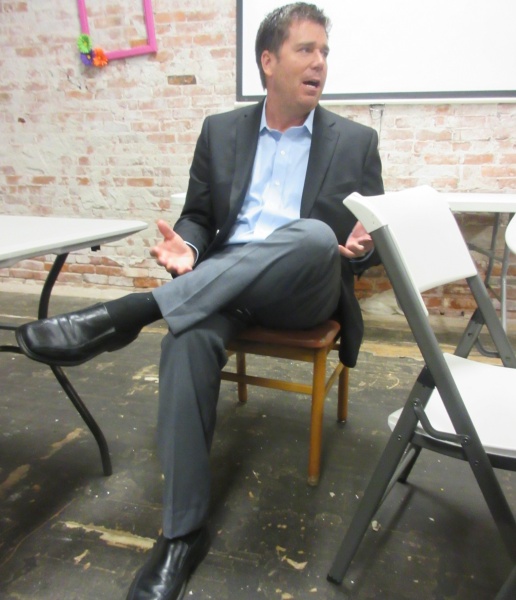 State Senator Rick Bertrand, of Sioux City, at the Homestead Coffee & Bakery in Jefferson on Wednesday, May 4.

In 2009, he decided he wanted to get involved on the state level.  An Iowa Senate district in Sioux City that had been held by Democrats for 30 years opened up, and Bertrand jumped in the race. “A lot of my friends were really questioning me on doing that,” said.  He won by 300 votes, was re-elected in 2014 by more than 2,000 votes and is now in his sixth year in the Senate.  In 2014, the Iowa Farm Bureau recognized Bertrand as a “Friend of Agriculture” and the Iowa Renewable Fuels Association named him a “Champion of Renewable Fuels.”

“I am at the same place in my political life – six years in the Iowa Senate – that Steve King was at when he was first elected to Congress,” Bertrand said.

But now King, who lives near the small west central Iowa town of Kiron, is 66 years old, has served seven terms in the U.S. House and is running again.

As in Bertrand’s first run for the Iowa Senate, some of his friends are asking him why he is challenging such a seemingly-entrenched incumbent.

“I’ll tell you when it was that I first started thinking about running for Congress,” Bertrand said. “You remember when (U.S. Senator) Tom Harkin announced he was going to retire?  Among those people on the Republican side who put their names out there were Joni Ernst,” who ultimately was elected, “and Steve King. When King was talking to people about whether he should run for the Senate or not, I had some of those same people coming to me, saying, ‘You know, if King makes this move, we need you to run for the House seat.’  So I’d been thinking about this for well over a year ago.”

When King decided to seek re-election to the House, Bertrand decided to run anyway.

“I know Steve King, and I’ve even had events with him,” Bertrand said. “There’s nothing personal about this. It’s just time.  It’s time for the 4th district to get a re-set button.”

It’s fortuitous for Bertrand that King last year stepped in a political hornet’s nest with his endorsement and active support of U.S. Senator Ted Cruz, of Texas, for the Republican nomination for president.  Cruz, who just this week suspended his presidential campaign, is supported by Big Oil and he has been a declared opponent of the Renewable Fuel Standard, which has enabled the birth and growth of the bio-fuels industry in the Midwest.  You’ll recall that Gov. Terry Branstad, his son Eric Branstad, who is an advocate for renewable energy, as well as other prominent Republicans involved in agriculture, blasted the King endorsement of Cruz.

“It was a flash point,” Bertrand said. “And that moment was met by my insurgent campaign.”

Bertrand’s preferred candidate in the Republican presidential race was Marco Rubio, the U.S. senator from Florida.  He said now he will support Donald Trump, the New York City-based business mogul who is the apparent nominee. “Yeah, I’ll support Trump,” Bertrand said. “I’m really an ‘Anybody But Hillary’ supporter.”

He said “people in the 4th district keep asking, how conservative am I?  Well, I’m a pro-life Catholic and I think that explains a lot.  I’m an active pro-life Catholic. I’m the guy that stands on the corner and takes the heckling.

“And taxes?  I ran on property tax relief, and three years ago helped pass the largest tax cut in Iowa history.

“So on the big three issues for most Iowa conservatives, there I am.”

Bertrand goes on to say that “one of the things I’ve learned is that in governing, you have to be tough and fair, but you can also be likeable. I’ve always been likeable.” 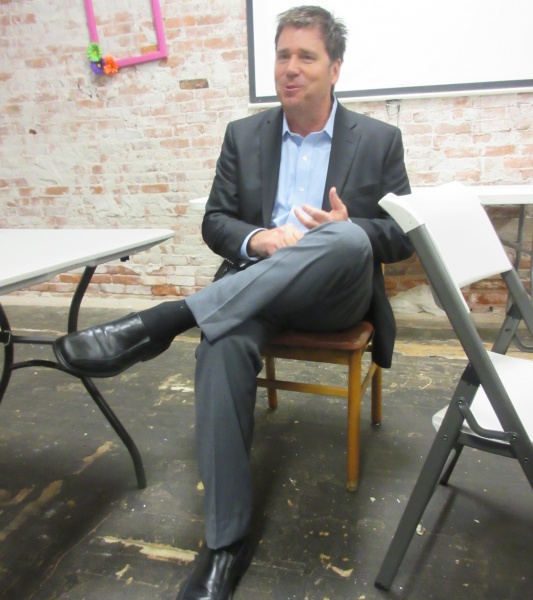 Rick Bertrand is challenging one of Iowa’s most entrenched politicians in Steve King. Why? “It’s time,” he says.

He says that across the nation, it’s going to be a “historic election this year, and I think all incumbents are in trouble.

“The idea in Iowa that we don’t primary is a changing trend,” he continued. “I believe in term limits, and that’s from the PTA to the U.S. Congress. When you stay too long in whatever your office is, you become too comfortable.  I’ve come to believe that in both business and politics, new blood is a good thing.”

Bertrand did not mention it, if he knows it, but King’s own political career started when he challenged a Republican incumbent for an Iowa Senate seat in 1996.  In that primary, King defeated Senator Wayne Bennett, of Ida Grove, a former Farm Bureau president in Ida County who had served 20 years in the Iowa House and then one term in the Iowa Senate.

Bertrand said that King’s 14 years in the U.S. House “is long enough.

“He has been by-passed for leadership positions in the House, and he’s been rated as one of the least effective members of Congress.  I think when you’re elected to a position like this, there’s about a decade of opportunity for you to get things done.  I believe the term limit (for a House member) should be about 10 years.  If you’re there that long and you’ve not ascended into leadership, you’re irrelevant.

“And when you become irrelevant, you become a microphone-grabbing celebrity.  You start working your own agenda.  I think that’s been the case for Steve over the last four or five years.  I don’t think Iowa people believe he’s working an Iowa agenda anymore.”

Bertrand said his own agenda “is an economic one for this district.”  With new bio-chemical tax credits available, he sees the potential for major investments in northwest and north central Iowa by not only bio-fuels companies, but also pharmaceutical companies and others – partnering with ethanol plants to use by-products from their fuel production.

He takes some of the credit, during his six years in the Iowa Senate, for getting highway infrastructure expanded and improved to service agriculture and industry – including the four-laning of U.S. Highway 20 across the district.  And he’s in favor of doing that for U.S. Highway 30, too.

Bertrand said his close contacts with executives and managers in the bio-fuels industry have given him more than just political support – he’s been endorsed by agribusiness leader and Iowa Board of Regents president Bruce Rastetter.

He also has deep understanding how value-added agriculture is leading an economic transformation of the district, including “rebuilding our small towns.  Good paying jobs cure a lot of community problems.

He said King’s focus on hot-button social issues and hyper-partisanship have made it nearly impossible for the congressman to work across party lines on economic development issues with others in the House, Senate and the administrations, and that’s why King has accomplished so little in his seven terms.

Although the no-show by Greene County Republican Party members here Wednesday was embarrassing, it didn’t seem to phase Bertrand.  He said he is still trying to meet with the party’s central committees in all counties in the district, including Greene.

“You never know how many people are going to be at these meetings,” he said. “But whether it’s one or three or a bigger crowd, it’s always an opportunity for me to introduce myself, answer questions and talk to the local media.

He said he’s been very pleased “that my largest events have been in Plymouth, Cherokee, Lyon and Sioux Counties.  Those are the real conservative heart of this district – places where you expect Congressman King to have lots of support, and he does.  But I’ve been doing real well right there in the den’s nest.”

On Wednesday, Bertrand said station KTIV in Sioux City has invited the candidates to participate in a televised debate there on May 20, and that “we’ve accepted.” He did not know if the King campaign has accepted the invitation.