THERE ARE DOZENS OF REASONS TO MOVE HERE NOW — AVAILABLE JOBS, TERRIFIC INCENTIVES.  BUT LET’S START WITH THE DONUTS!

JEFFERSON, Iowa, March 31, 2015 — So, you’ve heard about all the development and progress we have happening in Greene County in west central Iowa – hundreds of new jobs becoming available here in this year of 2015. And you’ve noticed that we have the call out far and wide that we need new people coming in to work here, hopefully to move here.

Ken Paxton, executive director of the Greene County Development Corporation, and his colleagues have put together excellent incentives to attract new workers and residents. Included in that have been the Chamber of Commerce, our leading employers, the governments of our county and communities, our banks, veterans organizations, and regional development organizations. That includes a head-turning package of enticements for military veterans, which our leaders put together and which won the designation by state government of Greene County as the first “Home Base Iowa” community. You can review all those incentives on the website www.greenecountyiowa.org.

Then Paxton asked me if I would “write a story or stories to tell potential newcomers and their families why, besides the jobs and incentives we’re offering, they should want to make their homes here.”

My wife Carla Offenburger and I have lived that question the past 10 years. We moved here in 2004, without jobs and with no family ties to Greene County, simply because we wanted to live here. We knew and had experienced the whole state pretty well in my years as a Des Moines Register columnist, and both of us had been heavily involved in several State of Iowa initiatives and projects. And we picked here.

It has been a good choice for us and probably would be for others, too.

Let’s start with the donuts. 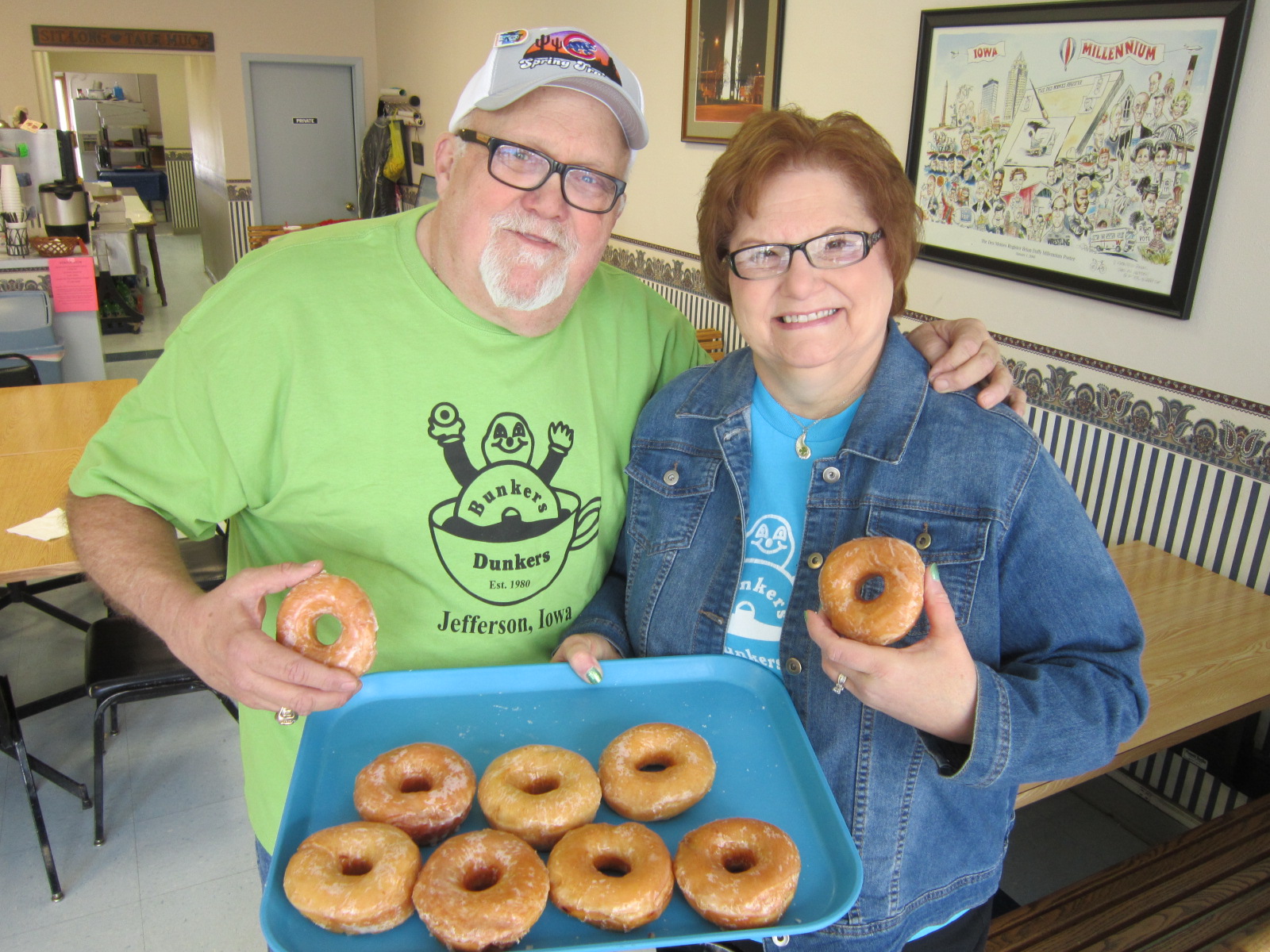 Randy & Phyllis Bunkers in their Bunkers Dunkers Bakery in our county seat town of Jefferson.

All of us here – and everybody who visits – unanimously agree that there is not a better donut in the world than the old-fashioned glazed donut at Bunkers Dunkers Bakery on the east side of the square in Jefferson. It’s hard to imagine a more cost-efficient economic development tool than these donuts made by Randy and Phyllis Bunkers. They’ve been an important reason why some big deals have happened here, including the decision by RAGBRAI officials (they direct the Des Moines “Register’s Annual Great Bicycle Ride Across Iowa”) to bring more than 10,000 people here for an overnight stay during the 2008 ride across the state. That was a multi-million-dollar, one-day windfall for Greene County, and what first got RAGBRAI director T. J. Juskiewicz’s attention was Bunkers Dunkers donuts.

Actually, the donuts were just another attractive incentive when Carla and I were making our re-location decision. What really drew us was the Raccoon River Valley Trail, one of the best paved recreation trails in America. It is 89 miles long, with a big interior loop, stretching from Jefferson to the capital city of Des Moines. Along the way, it takes you through 14 communities and gives you front-row viewing of fascinating agricultural operations on some of the most productive land in the world. It’s like having a national park, right here.

(And you should have seen the look on the face of the Fareway grocery clerk when we were buying our first cartload of groceries on June 10, 2004. Friendly as she could be, she was trying to understand what brought us here. “Well, if you don’t have jobs here, and you don’t have family here,” she said, “do you mind me asking why you’re moving here?” When we answered, “We’re moving here to live on the Raccoon River Valley Trail,” she looked at us like we must be coming from Outer Space, not just from elsewhere in Iowa.)

Now, here’s a quick list of “Things We Offenburgers Have Come to Love about Life in Greene County.”

–Jefferson and our other communities are what I call “20-minute towns.” By that I mean you can go to town with a half-dozen errands to do, and you can have ’em all done and be on the way home in 20 minutes.

–Greene County is wonderfully, and almost evenly, divided when it comes to politics and religion. You may have never thought of that as an asset, but I think it is. We have two strong political parties but just as many independents as there are Republicans and Democrats. We have strong churches, but no one denomination is dominant. I think that makes Greene County more “open” and “welcoming” to newcomers. Our county government is as good as you can find in Iowa, and I think part of it is that you’ll hear both Republican and Democrat office holders say, “We pretty much leave our politics at the courthouse door. In here, we work together.”

–Taxes here are very affordable and fair. Oh, always at budget time, you hear a few local people squawking about high taxes. Interesting, that almost always comes from people who have not lived anywhere else. After Carla and I paid Des Moines taxes for a couple decades, we still have this feeling here that we’re getting away with something!

–Healthcare here is good and getting better, with a $22.5-million renovation and expansion of our Greene County Medical Center in Jefferson. And as Carla and I can personally attest, after going through cancer fights from 2009-2011, there’s no better place to be living than small town or rural Iowa if you really get sick and need help. I’ll tell you sometime about a neighbor couple, both in their 80s, who showed up to mow our farmhouse yard when neither Carla nor I could do it. And they brought sour-cream raisin bars that we swear helped put our cancers in remission.

–We have fantastic room for new houses around the county – or old ones that you can re-hab – and a list of outstanding local contractors and craftsmen who can do your building. There are great possibilities for loft living in buildings in our business districts. Use this as an opportunity to build your dreams; you can get that done here. There are houses or space available in all our towns, and we’ve got acreage deals that can be put together in the countryside, too. Carla and I bought a 103-year-old farmhouse, barn, shed, garage and three acres for $35,000. Yowsa, was it ever a “fixer-upper”! Nobody had lived in it for eight years except a raccoon in the front room. But we put $85,000 in it, and we now think it’s a paradise. Come have a look at our place. 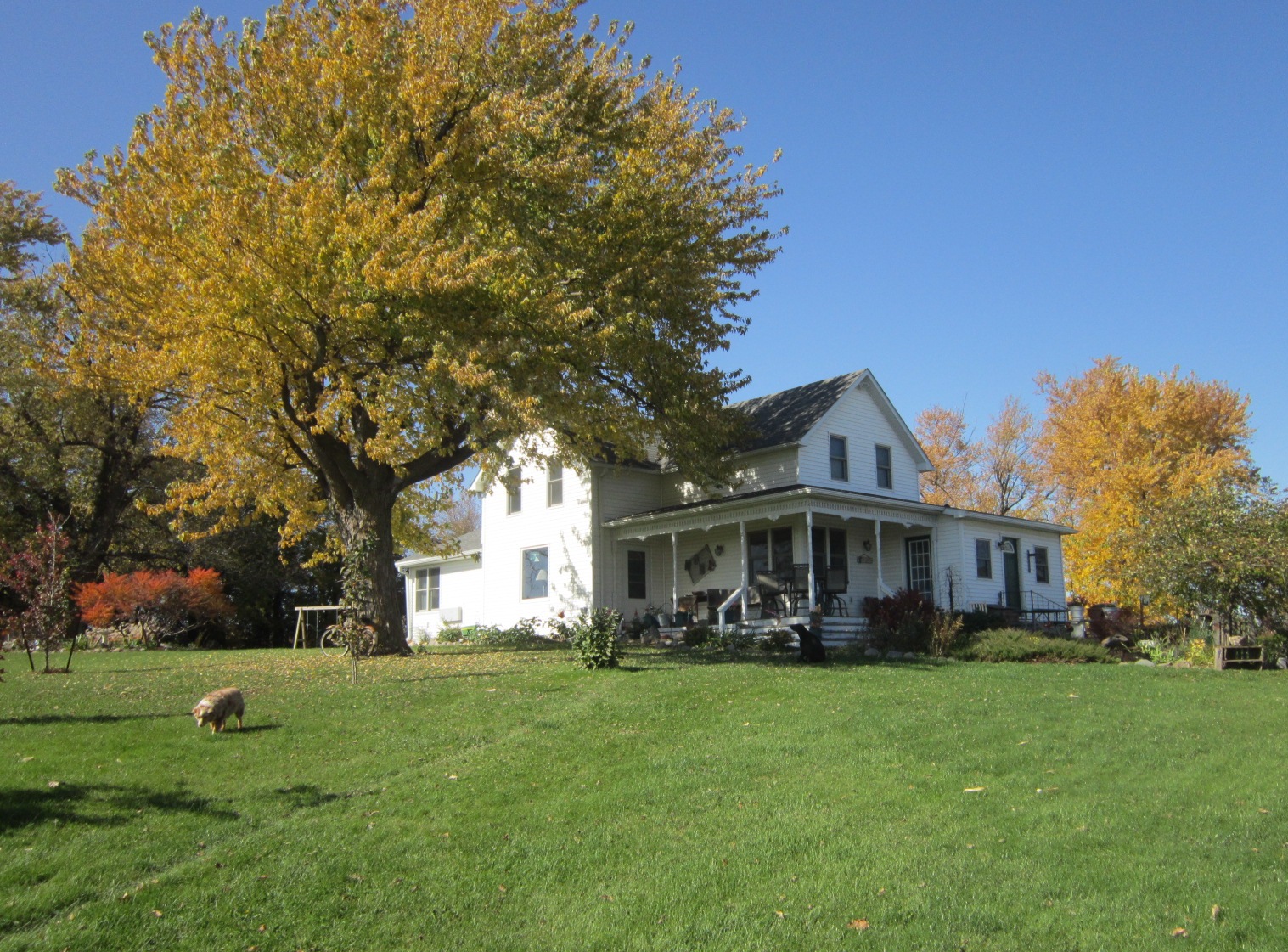 Here’s where we Offenburgers live.  This photo was taken in late October last fall.

–In our Greene County Community Schools and our Paton-Churdan Community School, your kids can have real chances at being starting athletes, featured singers and instrumentalists, participants in declam & theater, members of every club imaginable. Our vo-ag, industrial arts and culinary arts programs are exceptional. Your kids can start their college experiences in classes offered right here by our regional community college. And Iowa State University is just a 50-minute drive.

–For a county with just under 10,000 people, we have an amazing variety of good restaurants, starring our Chinese, Mexican and barbecue places that are as good as you’ll find anywhere.

–We’ve got the coolest local women’s poetry group I’ve ever encountered. There are several book clubs. We have a professional theater that does cutting-edge new plays and musicals, as well as some classics. We have a community theater group where you, too, can be in a production, join the stage crew or be involved in other ways. And our community-owned and operated Sierra Theatre has the best movie deals in the state.

–Hunting and fishing around here are good, and seem to be getting better. You can ask Greene County Conservation director Dan Towers, who knows this county like the back of his hand, to give you some directions and hints – and he will. Also have him show you our county parks, including our classic lake-side roller rink, dating to the 1920s, at Spring Lake Park.

–Our entertainment resources, dining and overnight accommodations are about to take a huge leap with the impending completion of Wild Rose Jefferson, the $40-million new casino and conference center, with an attached $5.3-million Cobblestone Hotel & Suites.

–With the Jefferson Bee & Herald, Greene County News Online, the Scranton Journal, Greene County Living magazine, Raccoon Valley Radio and Jefferson Telecom cablevision, we have more media covering Greene County than any time since about the 1950s. That’s good because there’s a whole lot more news to cover than there’s been here in decades, and that’s even healthier.

–And here may be the best part: I never dreamed 10 years ago that I’d be saying this now, but Greene County is indeed poised for what looks to be robust growth economically and in population. Our six home-grown manufacturers have all kept growing right through the recent national recession, and they’re ready to expand some more. Newcomers like Wild Rose, the Hy-Vee Food Store and others are forcing wages to climb in all local businesses.

You know, we’re a happening place right now, here in Greene County. It’s contagiously fun to be part of it. I swear it’ll be as good a move for you as it has been for Carla and me. 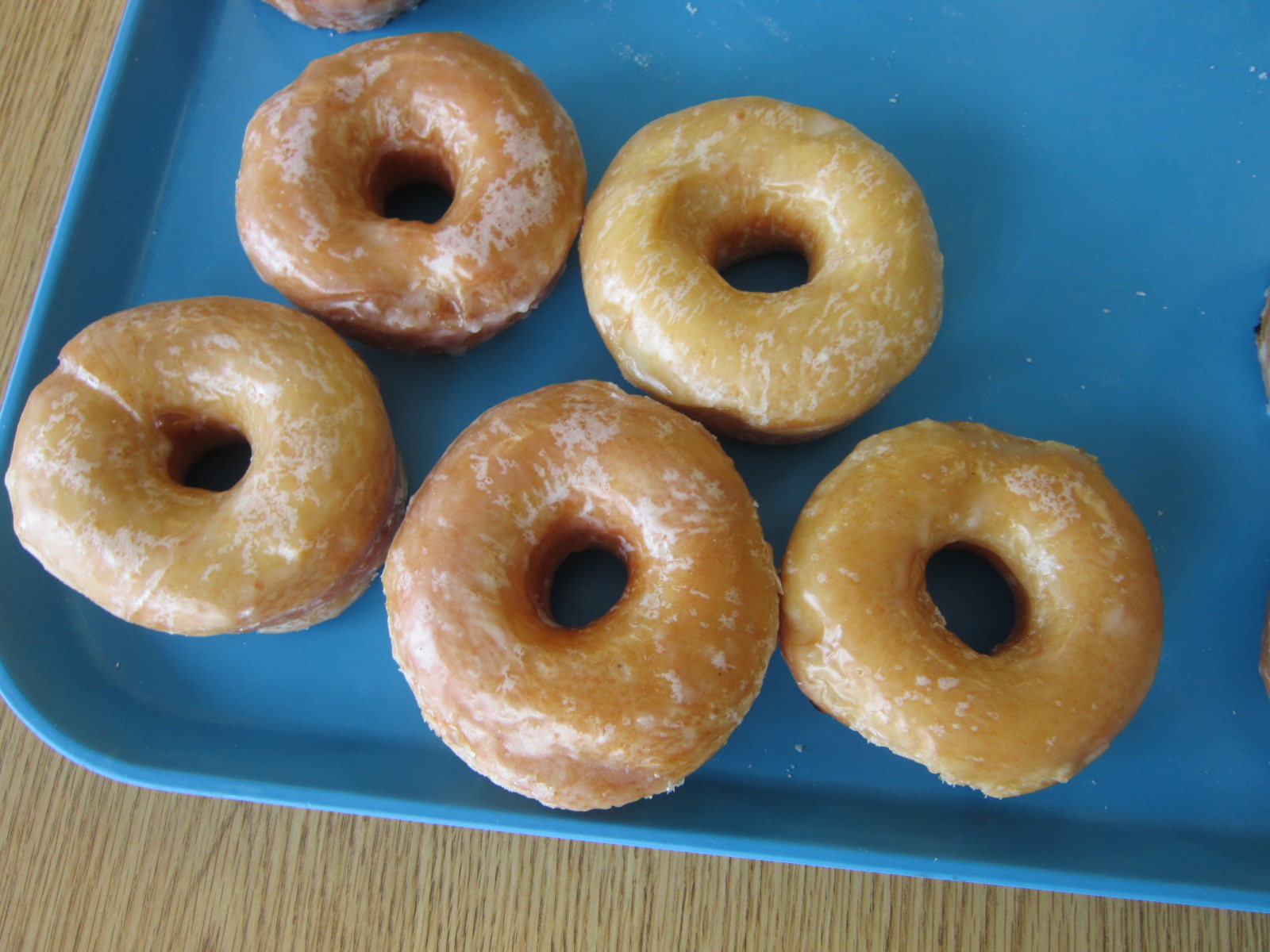 Here they are again — only at Bunkers Dunkers Bakery in Jefferson.

The author Chuck Offenburger says you can get your best information about Greene County, Iowa, from local development officials via the website www.greenecountyiowa.org. But if you’re not satisfied there, Offenburger says to contact him directly at chuck@Offenburger.com or (515) 386-5488. He’ll be glad to talk to you.

7 thoughts on “It’s a great time to move to Greene County, Iowa, and here’s why you’d like it as much as we do”