JEFFERSON, Iowa, June 6, 2018 – By proclamation of the Greene County Board of Supervisors, this past Sunday, June 3, was officially “Carla and Chuck Offenburger Day” here in our home county. Reports from the field are that there were no injuries, property damage, fights, protests or arrests.

Carla and I are grateful, not only that we were presented the “Greene County Community Impact Award,” for our volunteer work over the 14 years we’ve lived here, but also that the good people of this west central Iowa county have been so kind, welcoming and supportive of us.

Sunday afternoon, they gave us the award in a wonderful ceremony in the stately rotunda of our 100-year-old courthouse in Jefferson. Friends and family came from across the county and as far as Cedar Rapids. 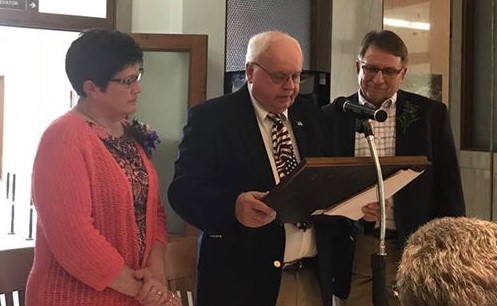 Jerry Roberts reads the citation for the 2018 Impact Award with we Offenburgers beside him. (Photos by Wendy VanderLinden)

Master of ceremonies Jerry Roberts talked about our work in economic development, politics (both parties) and tourism. Mike Wallace, the Dallas County Conservation director, reflected on the roles both Carla and I have had in promotion of the Raccoon River Valley Trail. Roger Aegerter, executive director of the Greene County Historical Society, talked about my service on the group’s board. Our neighbor and close friend Karen Lawton reviewed the fun we’ve all been involved in around our town of Cooper, as well as Carla’s service as clerk for the Franklin Township Board of Trustees.

John Muir, chairperson of the county supervisors, read the proclamation recognizing us for “tirelessly serving the Greene County Community with their gifts of time, talent, and leadership in promoting the Raccoon River Valley Trail, as well as selflessly volunteering in civic, historical and educational venues and endeavors.”

Maybe best of all, our talented friend Nicole Friess-Schilling and her daughter Ava Schilling serenaded us with two songs, “Side By Side,” which appropriately starts, “Oh, we ain’t got a barrel of money,” and then “Together.” Nicole said those should be our Offenburger theme songs, God bless her. 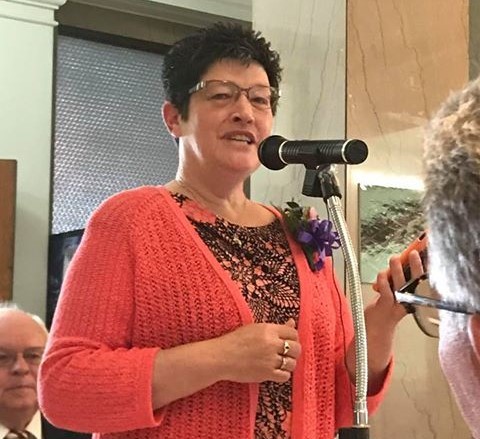 Carla’s response to this was a poem she wrote while we were on a road trip the day before. Instead of dwelling on what we’ve done in our time as Greene Countians, she called it “We’ve never done…” And here it is, just as she recited it:

We’ve never done slow very well.
Fast pace
Many in the race
Keep moving
Get to the finish line too.

We’ve never done “can’t be done” very well.
Find a way
Reconfigure, revise
Wait it out
Make it happen too.

We’ve never done alone very well.
Many in front of us
Beside us
Even behind us,
Pushing us too.

We’ve never done quiet very well.
Tell the story
Tell it to all who will listen
Tell it again
And be loud too.

And we’ve never done being honored very well.
But today, we appreciate this honor,
The friendships made along our way,
The successes, the failures,
The memories too.

My own response was a quick review of what I’ve seen and felt happening in our 14 years here.

There has been so much dramatic and positive change in Greene County in that time, led by a whole bunch of different people. And now there’s a big, fresh wave of new, younger leaders stepping up. I think what Carla and I need to do is simply keep the Impact Award warm for its future winners. 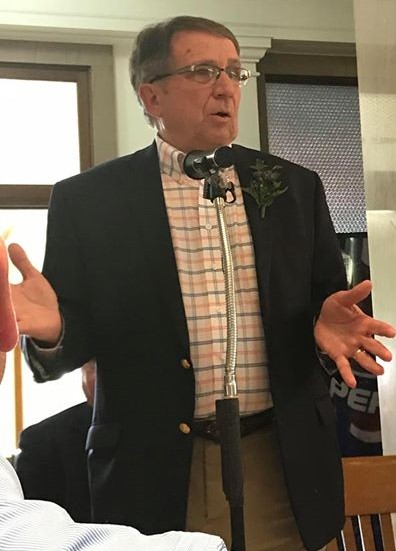 In the photo at the right, Chuck Offenburger speaks during the ceremony.

In 2004, when we moved here, our bedrock industry of agriculture was mostly corn and soybeans, for feeding livestock elsewhere and for processing into food products. The bio-fuels industry was just starting up. Now, we have three ethanol plants and a bio-diesel plant all around us, offering Greene County farmers a huge new market for their crops. There hadn’t been a lot of livestock around here since the 1970s, but in the last decade we’ve had 100 hog CAFOs, lots of cattle operations and even some sheep production start up – yes, sometimes controversially, but they’ve helped diversify the local farm economy.

Our home-grown manufacturers – each of them with a thrilling story of entrepreneurship in their histories – not only survived the economic disasters a decade ago. They somehow seemed to thrive right through that period when so many companies fled to Mexico and other places with cheaper labor. Our plants have all had major expansions. And now the wind energy industry is growing up so fast around us we can hardly keep count on just how many turbines there are here now.

We’ve seen major new retail businesses move in, and some long-established businesses now use the internet and other new technology to expand their markets. Greene County Medical Center completed an impressive expansion and renovation.

We took a huge step forward in terms of entertainment, hotel & convention accommodations with the building of Wild Rose Casino & Resort in Jefferson. And now it churns out new financial resources for government, education and non-profit civic organizations.

Most recently, voters in the Greene County Community School district approved the building a new high school and vocational “career academy,” and renovating the current high school into a new middle school. It’s a huge step, one we desperately needed to stay competitive as a school system and county-wide community.

And as I think back about the people who’ve filled our boards, councils, pulpits, school administration and faculty, there has been nearly a 100 percent turnover. Good people have shared their time, talent and treasure, and are now being succeeded by eager younger people, ready to do their part. We Offenburgers have demonstrated just how easy it is for newcomers to get involved here, really involved.

It has been a remarkable transformation in these 14 years.

I also mentioned that at my age, I never seem to hear a bad sermon anymore. One I particularly remember was by Father Bill Brunner, who was filling in at St. Joseph Catholic Church in Jefferson at the time when the first seven wind turbines had become operational, just north of town.

“Some of you probably look out there and just see seven new wind turbines,” Father Brunner said. “But I see something more. I’m calling those turbines ‘The Seven Prophets,’ because I see them blowing the winds of change across Greene County, and I think it’s going to be good!”

It surely has been, and Carla and I have been thrilled to be part of it. 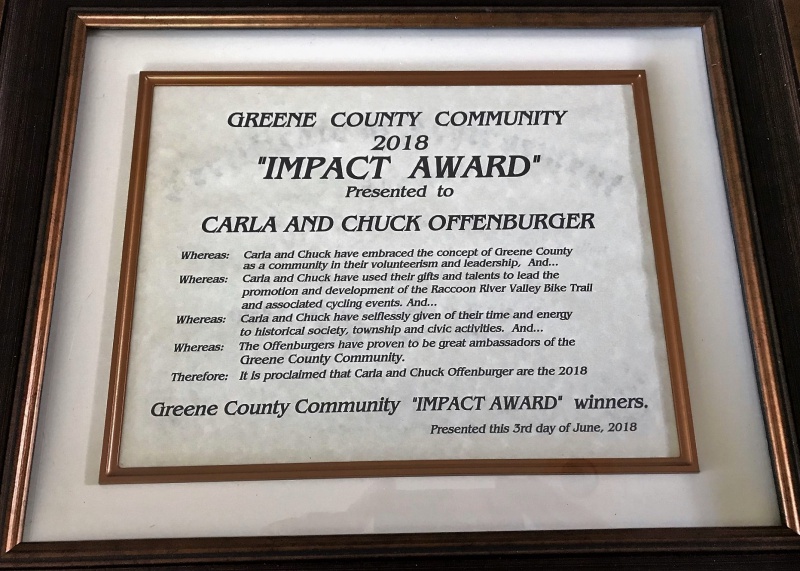 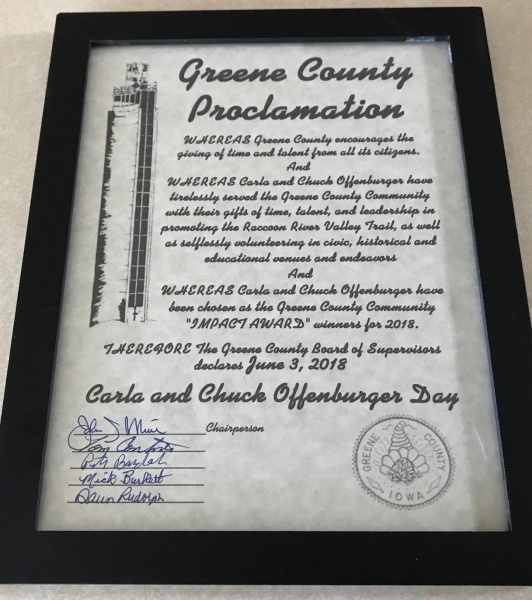 The proclamation of “Carla and Chuck Offenburger Day” in Greene County. 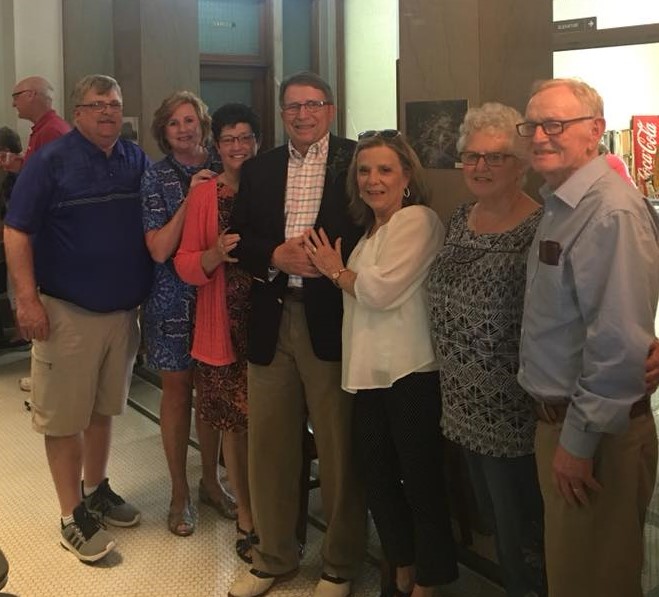 3 thoughts on “Greene County has an “Offenburgers Day” with no mischief whatsoever!”