WAHPETON, Iowa, Sept. 22, 2022 — I felt like we’d almost checked-in at Grant Wood’s Art Colony in Stone City, back in the 1930s.  But instead, it was the second annual “Okoboji Writers Retreat” that former Des Moines Register columnist and WHO radio talkshow host Julie Gammack and her husband Richard Gilbert organized this past Sunday-thru-Wednesday at the Iowa Great Lakes.

There were more than 200 of us — 180 adult “students,” stretching in age from their 20s to their 80s — and about 30 of us “faculty” who’ve been involved in various kinds of professional writing over our careers.  We came from coast to coast.  All our classes and some of our bunks were in the wonderful State of Iowa “Lakeside Lab,” originally constructed in the hard times of the early ’30s by Civilian Conservation Corps workers. The “lab,” which hosts all kinds of university and public organizations for retreats and conferences, features many of the original stone and cobblestone buildings, nicely renovated and maintained. 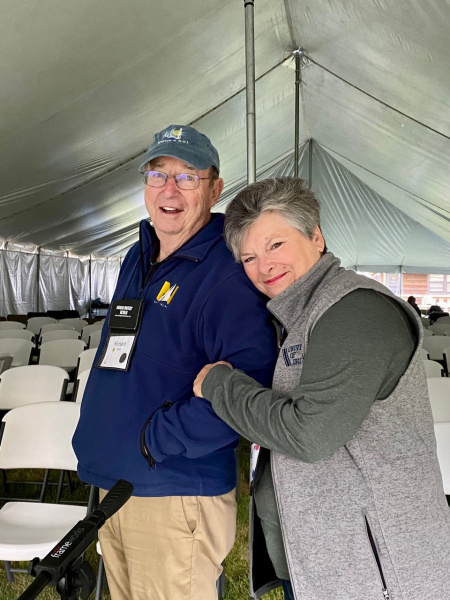 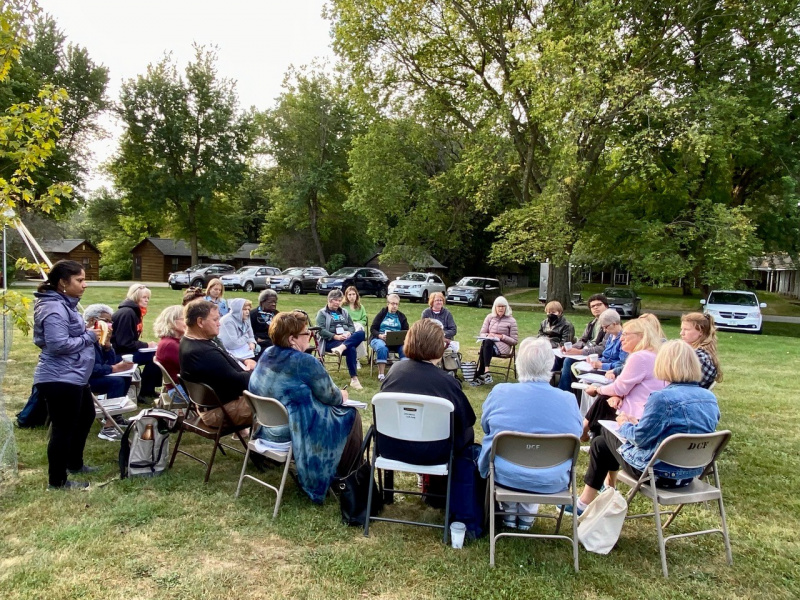 Here was one of the larger writing classes, meeting in the yard at the Lakeside Lab on the west shore of West Lake Okoboji. Former Des Moines Register reporter Phoebe Wall Howard, who now covers the auto industry for the Detroit Free Press, led this discussion on “writing with emotional detail.”

With beautiful West Lake Okoboji’s “Little Miller’s Bay” in front of us, gorgeous trees all around us, and one of the state’s best recreational trails running right through the facility, we talked in 90-minute classes and sessions about all the experiences of being writers.  We included just-beginners, grizzled newspaper veterans, playwrights, novelists, radio newsies, poets, folksinger Carol Montag from Cedar Rapids, right on up to Ottumwa’s Leigh Michaels who has sold more than 35 million books, most of them in the romance novel genre.

Speaking of “millions,” my bet is that millions of words will be written in coming days and weeks that will be traceable to inspirations at the Okoboji Writers Retreat.  After the first one a year ago, a half-dozen books and dozens of columns and articles resulted.  This has very quickly become an iconic kind of Iowa event.

Gammack and Gilbert, he the former gubernatorial press secretary and media executive, have delivered on one cool idea. 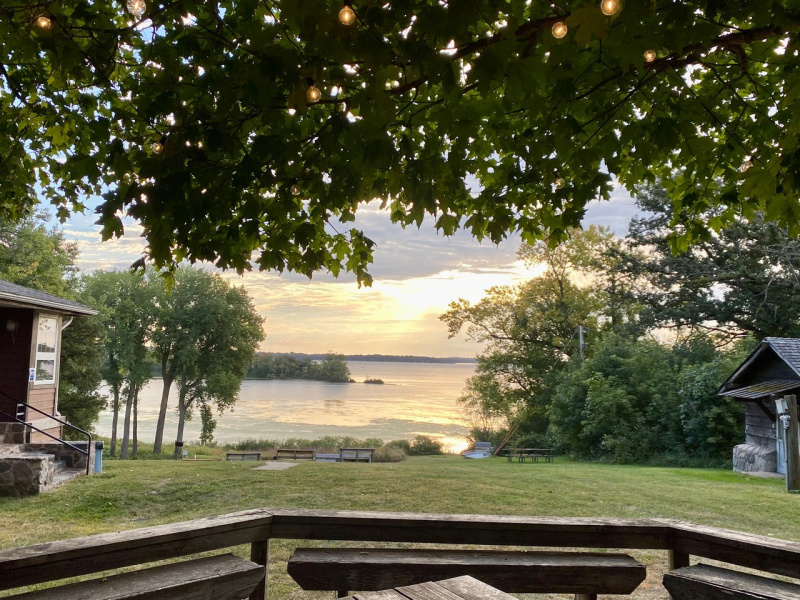 A constant view for participants in the Okoboji Writers Retreat. 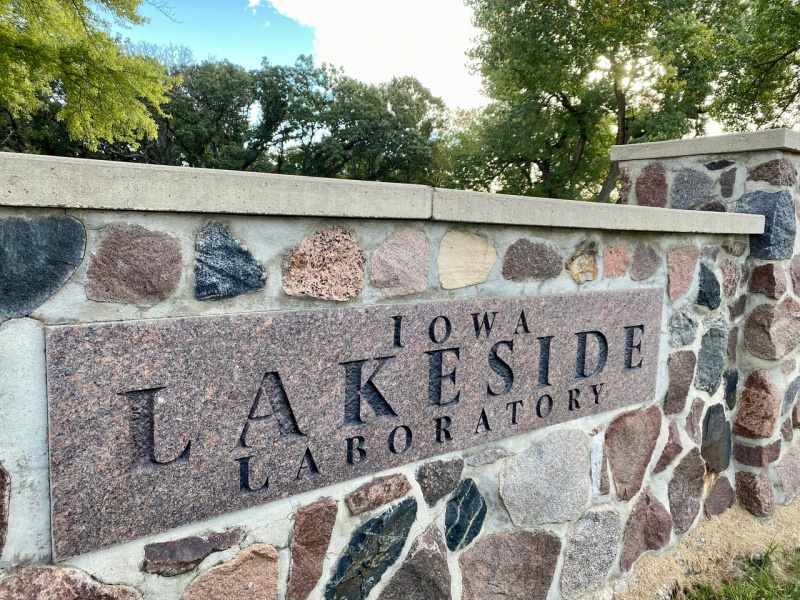 The stone construction is one of the calling cards of the Lakeside Lab. 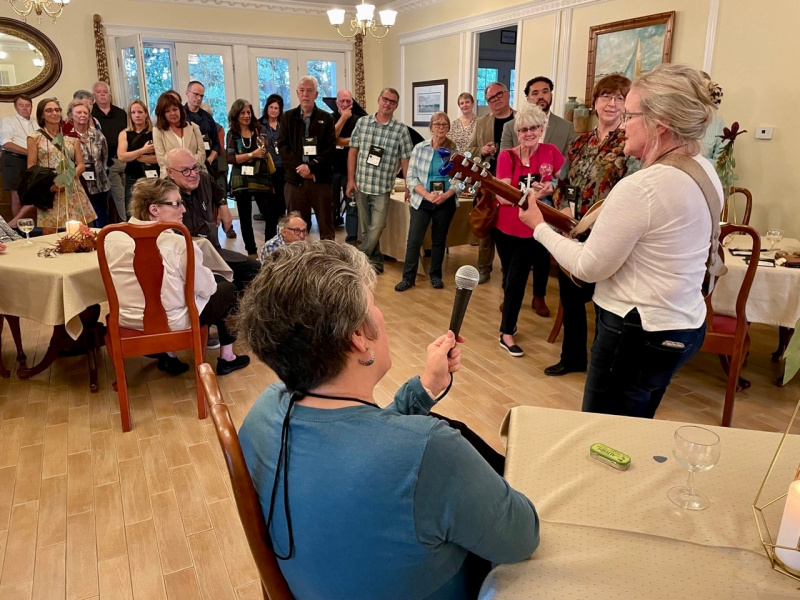 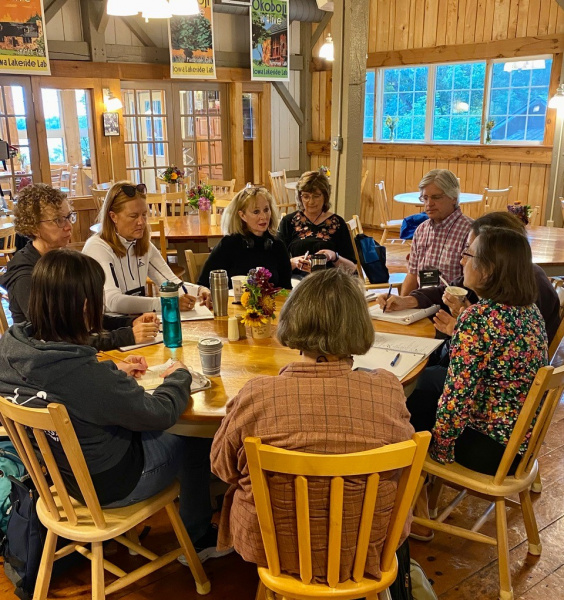 One of the classes in a session led by Beth Hoffman, author of “Bet the Farm.” 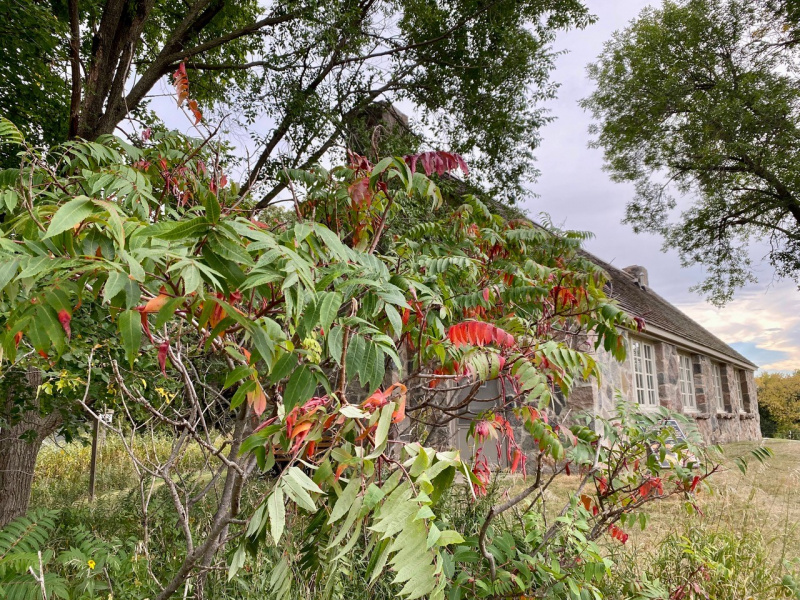 The facilities at Lakeside Lab are picturesque, especially this time of year. 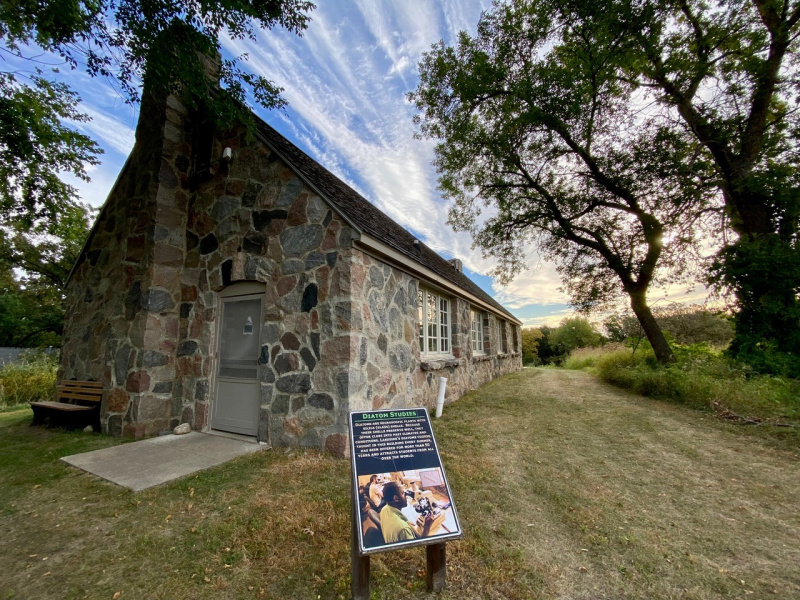 Another one of Lakeside Lab’s buildings. 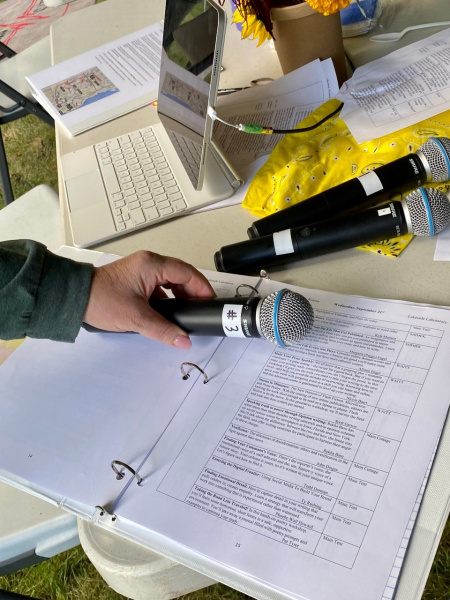 How many microphone batteries did we drain? 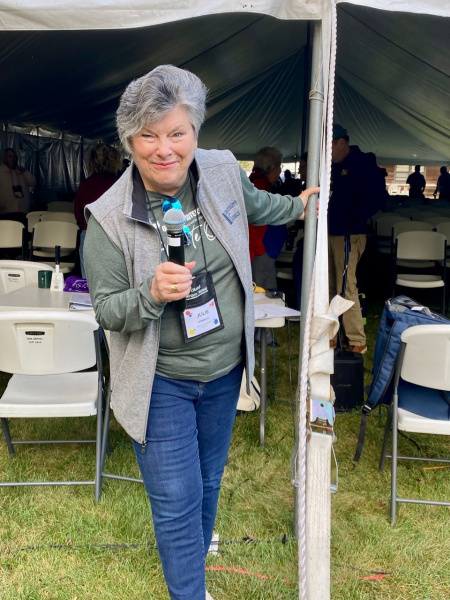 “Do you want to do a reading of your stuff?” Julie Gammack would ask. And writers kept stepping up to do just that. 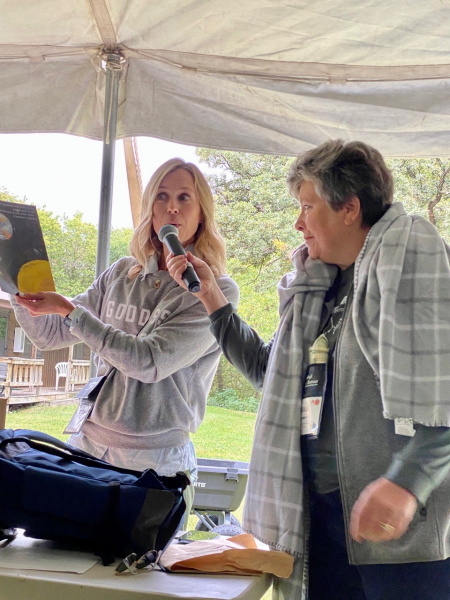 Alison Van De Pol reads from a children’s book she authored, “The Moon is My Favorite Color.” 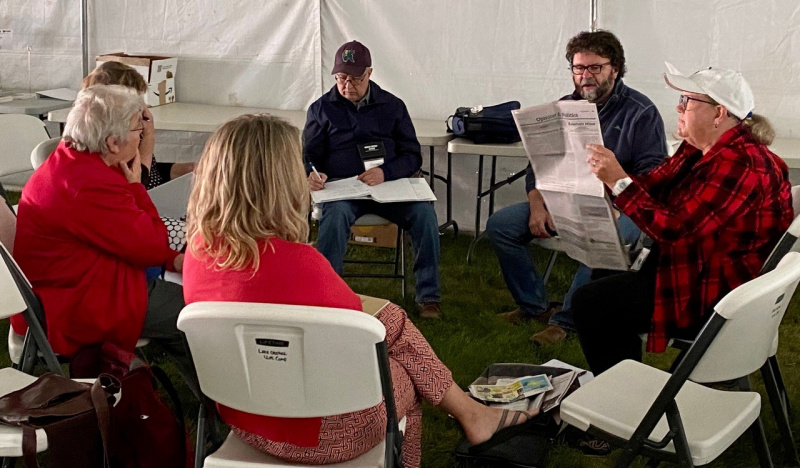 Todd Dorman (back right), columnist and editorial page editor of the Cedar Rapids Gazette, is shown here leading a class on “finding your columnist voice.” 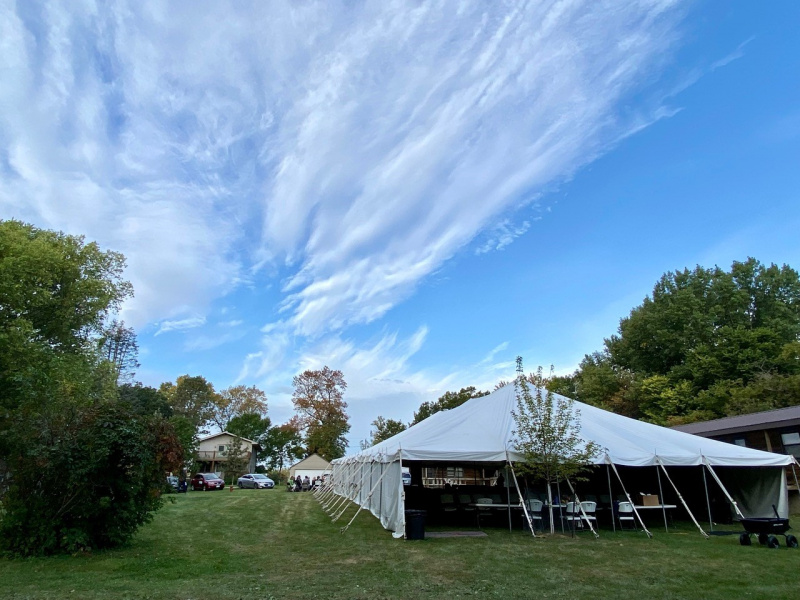 The headquarters tent at the Okoboji Writers Retreat.  Gathering and concluding sessions were held in it daily, and it was also a stop for coffee, snacks and conversations. 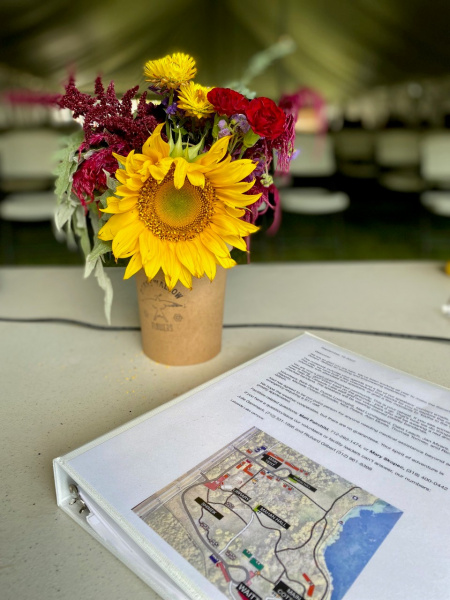 Bouquet on the speaker’s table in the main tent headquarters, next to the notebook filled with information about the speakers and topics of the sessions. 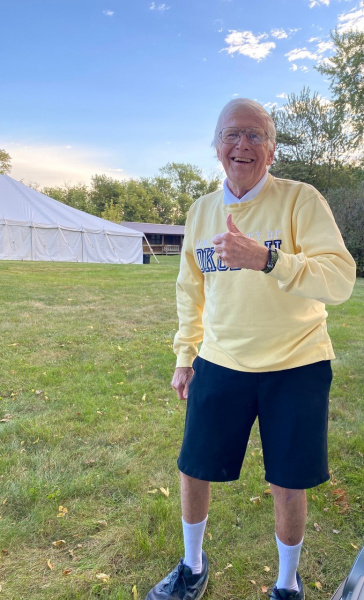 Herman Richter, co-founder of Three Sons clothing in nearby Milford and also co-founder of the University of Okoboji promotion, was one of the “students.”  He’s got thousands of stories rolling around in his mind and heart, from his career at the Iowa Great Lakes, and he said he’d like to have them in writing.  “One of the best things I learned here,” he said of the writers retreat, “is that whether you’re writing on a paper tablet or a laptop computer, the most important thing to do is ‘just start writing’.” 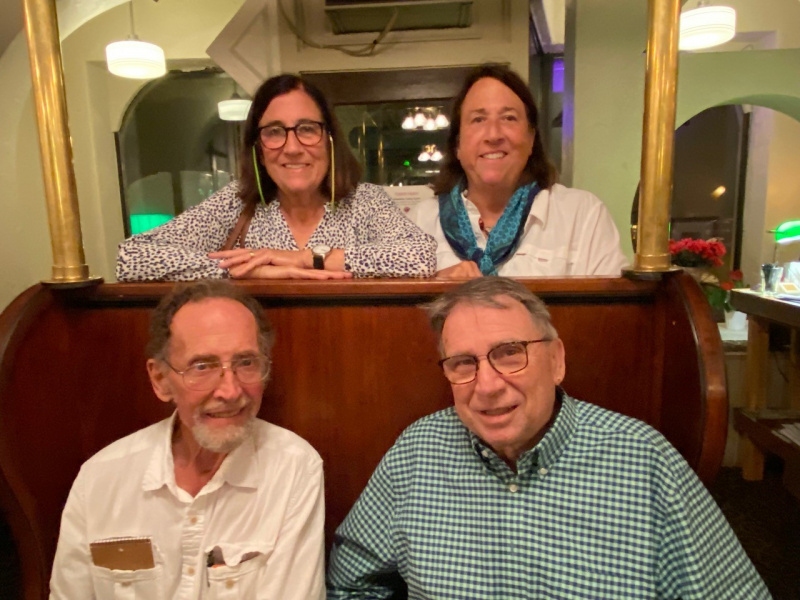 The “faculty” included many writers who’ve had deep ties to the Des Moines Register over the decades.  Those included (back) twin sisters Allison Engel, of the Los Angeles area, and Margaret Engel, now of Washington, D.C., and Larry Stone, of Elkader in northeast Iowa, and Chuck Offenburger, of Jefferson and Des Moines. 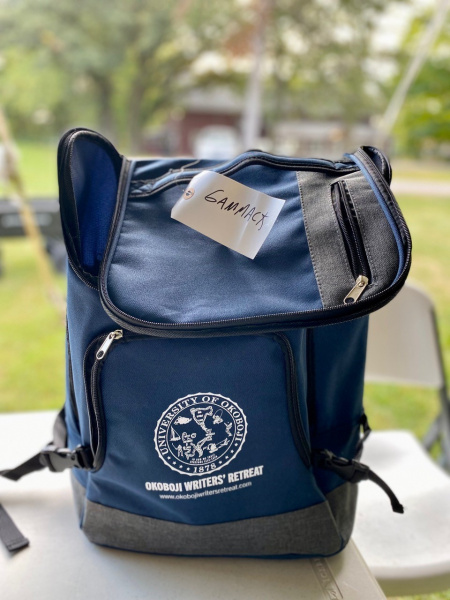 All participants received these backpacks to haul notebooks, laptops and other resources around the Lakeside Lab campus. 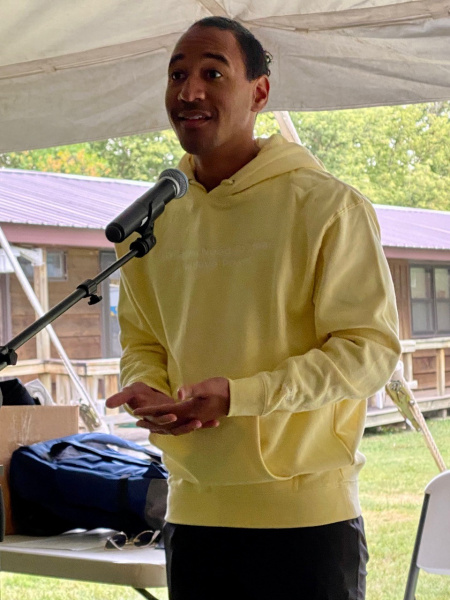 Caleb Rainey, an outstanding poet, or “spoken word artist,” from Iowa City, led classes on writing verse and also did several recitations of his own work, including in this photo when he did a closing poem for the retreat. 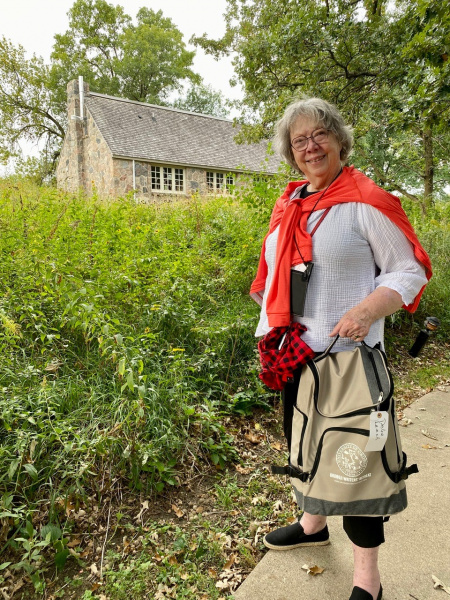 Deba Leach, of Iowa City, was among those who’ve written or aspire to, at the Okoboji Writers Retreat. 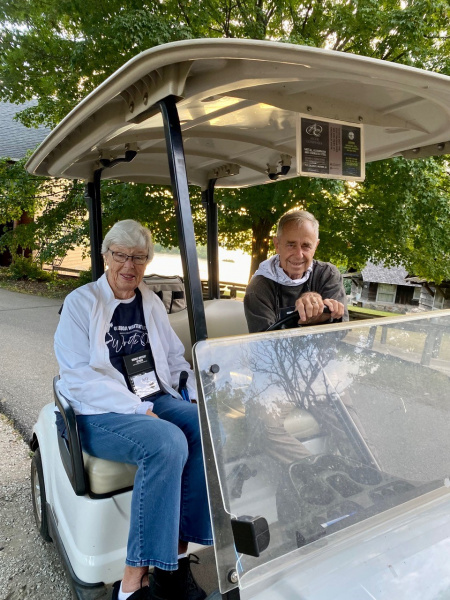 The Okoboji Writers Retreat had an interesting group of skilled volunteers helping with various tasks, including Dr. Bob Shreck, a leading oncologist in Des Moines who took a few days off to come drive a golf cart around the Lakeside Lab campus, shuttling writers to different classes. 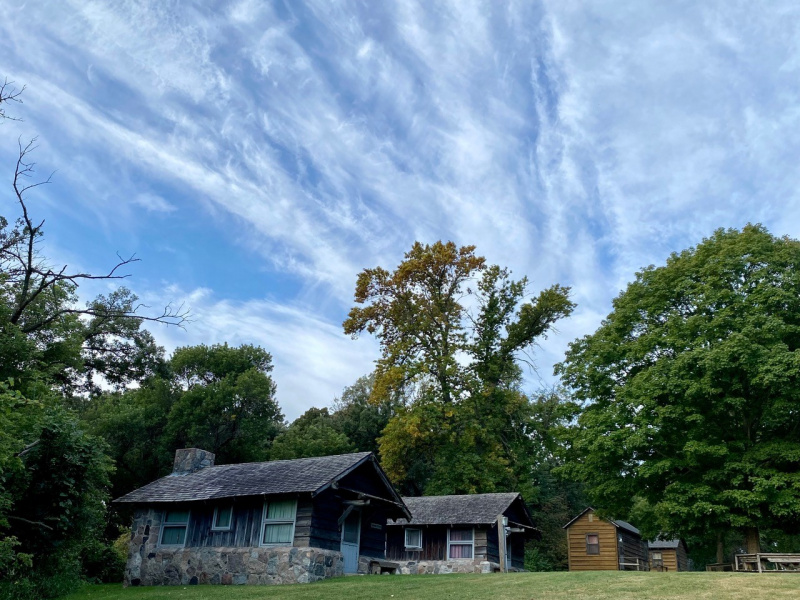 A row of handsome rugged cabins at the Lakeside Lab. 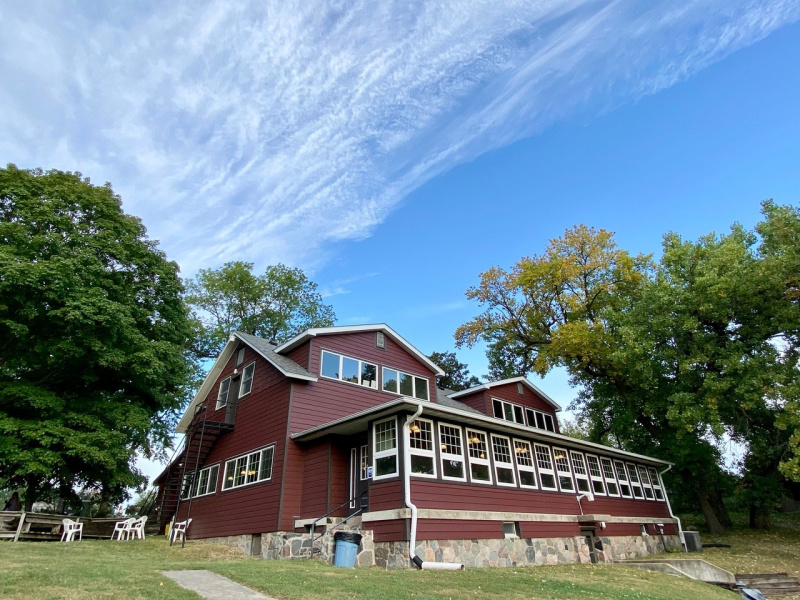 The Dining Hall at Lakeside Lab was plenty busy during the writers retreat. 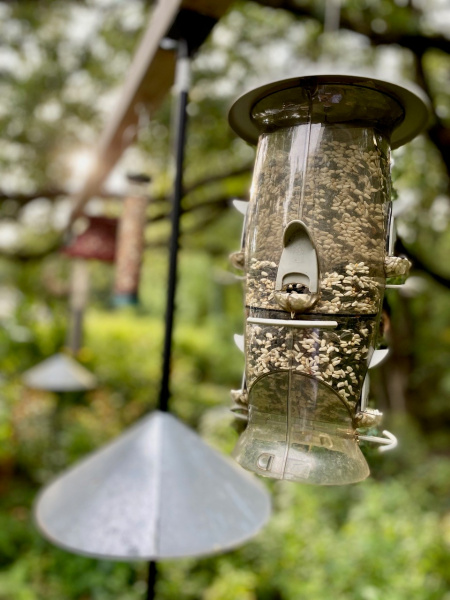 A row of birdfeeders in a prairie adjacent to Lakeside Lab, where you find yourself basking in nature. 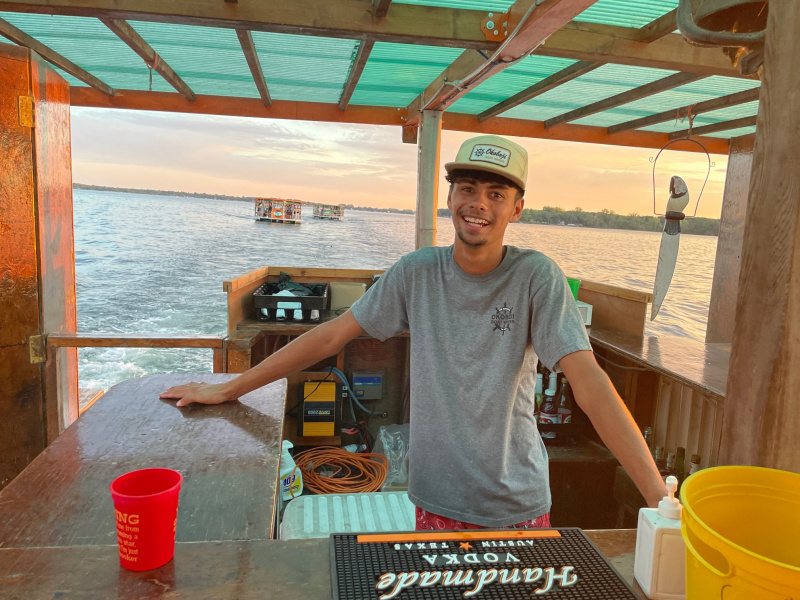 Kienan Merritt was one of the bartenders when three barge loads of writers went on a sunset cruise on West Lake Okoboji. 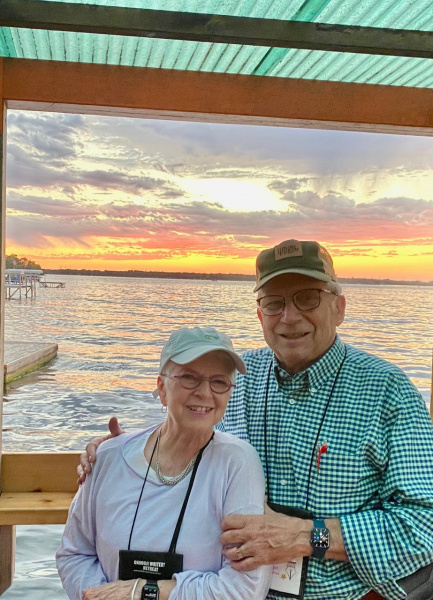 Mary Riche, of Des Moines and Jefferson, did a whole lot of photography and Chuck Offenburger taught classes on storytelling and writing non-fiction stories, columns and books.

You can comment on these photos and story by using the handy form below, or you can write directly to our team by email at maryriche@gmail.com or chuck@offenburger.com.

13 thoughts on “In 25 photos & a few words, here’s the story of the 2nd annual Okoboji Writers Retreat”