DALLAS, Tex., May 8, 2015 — Put up a nicely-done, large, and original piece of public art; maintain it well, and you’re going to have a major tourist attraction for decades to come. That holds true whether you’re downtown in a 4-plus million population metropolitan area like Dallas, where I visited a week ago, or along a recreational trail in west central Iowa, where I live.

The installation that stirred my most recent thinking about  all this is “Pioneer Plaza Cattle Drive,” a 21-year-old portrayal in bronze of a Texas cattle drive.  It occupies 4.2 acres of land right outside the Dallas Convention Center, kind of on the southwest corner of downtown Dallas.  There are 49 Texas longhorn steers on this cattle drive, each portrayed at 130 percent of what would be life-sized.  They are being watched over and herded by three cowboys on horses.  The setting is a plateau, hillside and creek that features real trees, grass and big boulders — all created as part of the sculpture. They claim it is “the largest bronze sculpture of its kind in the world.” 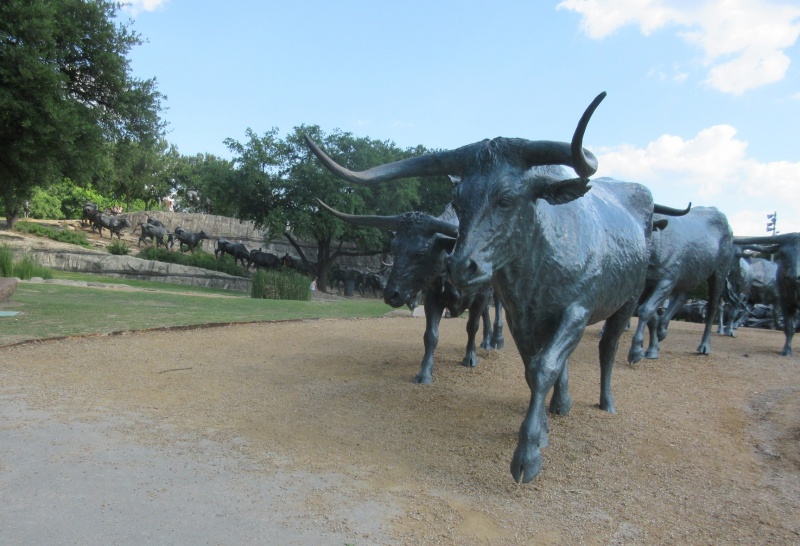 The artwork and the plaza, now owned by the City of Dallas and overseen by the city’s Public Art Program, are valued at $9 million today.  About $4.8 million was raised privately to fund construction of it in the early 1990s.  It was dedicated in 1994 with only six of the current 49 steers in place.

Nationally-known sculptor Robert Summers, whose studio is in his nearby hometown of Glen Rose, Tex., developed, designed and built the Cattle Drive installation.  A real estate developer Trammell Crow, who is said to have loved “Western” art, made a substantial donation and then led private fundraising for the project. The design and finished artwork were initially very controversial in the Dallas area, as public art projects often are.  Some said it mis-represents Texas history — that Dallas was always an oil and business center, not the cow town that neighboring Fort Worth actually was.  Somebody wrote that the Cattle Drive “looks like something J.R. Ewing would have done,” invoking the name of the scalawag character on the long-ago popular TV drama, “Dallas.”

But Kay Kallos, manager of the City of Dallas Public Art Program, gave me the perspective I was really looking for.  “The Pioneer Plaza Cattle Drive is the second-most popular and visited tourist attraction in Dallas, behind only the Sixth Floor Museum at Dealey Plaza — the site where President Kennedy was killed,” said Kallos, who, by the way, graduated from the University of Iowa. “Almost any time of the day or night, you can go to Pioneer Plaza and there will be people walking around the steers in the Cattle Drive — taking lots of photographs and reading the stories that go with it.  It’s really a 24/7 attraction.  There have been all kinds of videos taken there.  It’s been the backdrop for lots of TV news reports and shows that are doing something in Dallas. It’s really become one of our best-known symbols.”

Many of us who are advocates for enhanced recreation, tourism and economic development along the Raccoon River Valley Trail are now at work on public art installations on this popular, 89-mile, paved trail, which stretches from Jefferson on the northwest to Waukee & the Des Moines area on the southeast.  Acclaimed sculptor David Dahlquist, based in Des Moines, has developed the “Waukee Railroad Pergola — in the shadow of the rails” installation, to be built at the Waukee trailhead.  That has established the “in the shadow of the rails” theme, which other trail communities are using to help tell the stories of the west central Iowa area, as well as the story of the rails-to-trail conversion that created the RRVT.

Seeing and learning about the drawing power of Pioneer Plaza Cattle Drive in Dallas makes the projects at home in Iowa seem all the more urgent, beneficial and important. 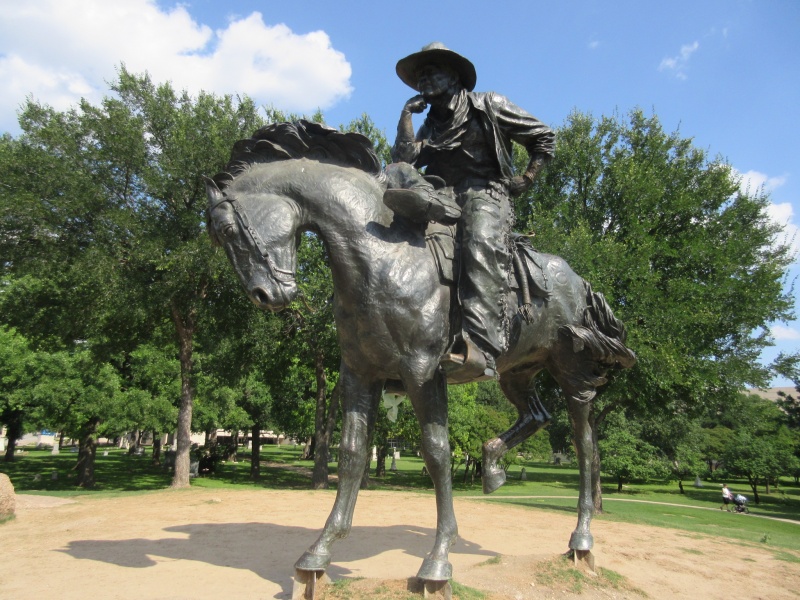 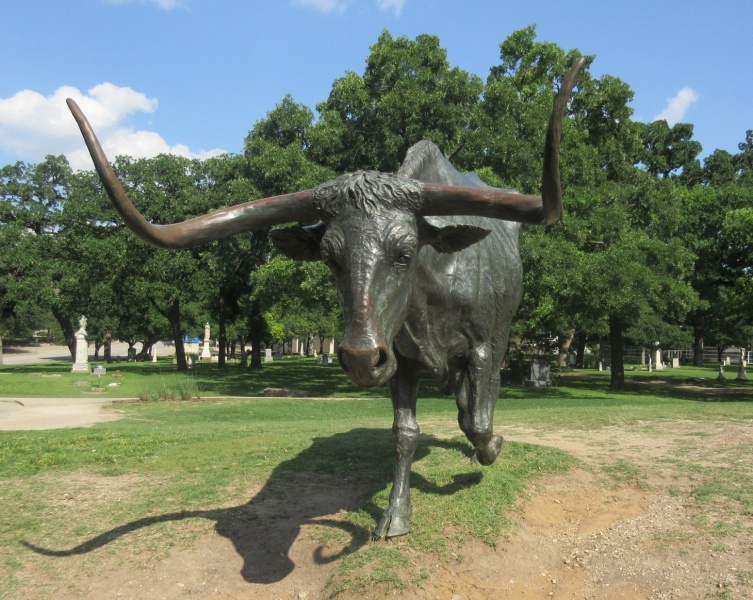 Here comes a Texas longhorn.  All 49 of the bronze steers that sculptor Robert Summers has made for the art installation are different.  And some have historical markings, like a “Big D” brand. 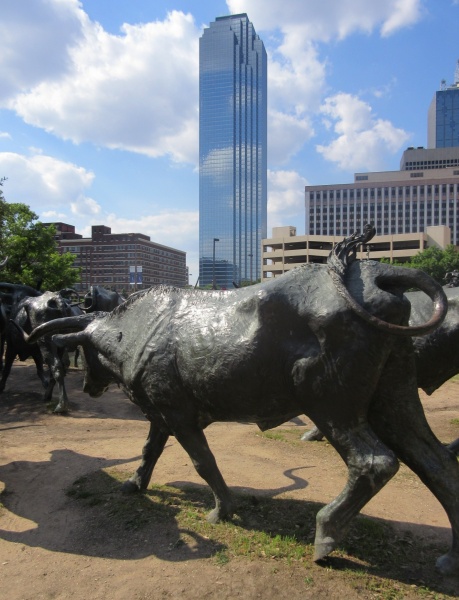 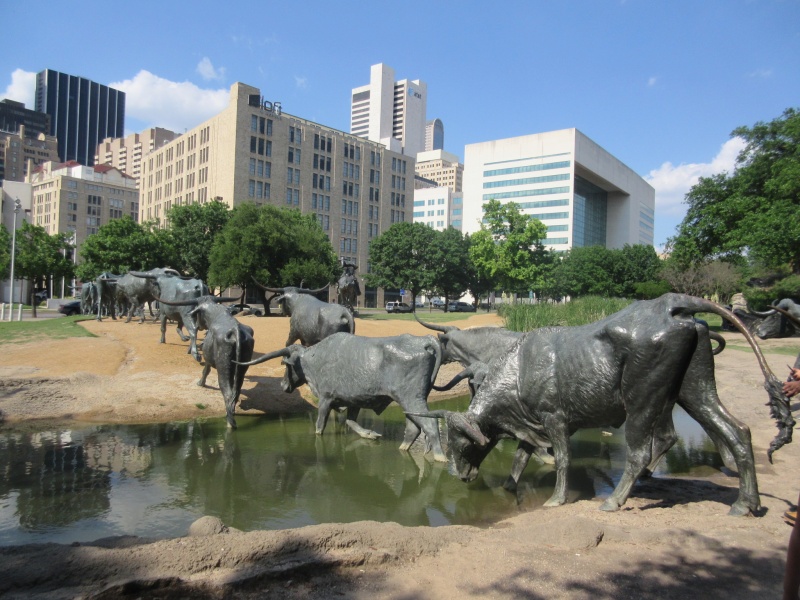 The longhorn steers crossing the creek, and notice that one or two are trying to grab a quick drink. 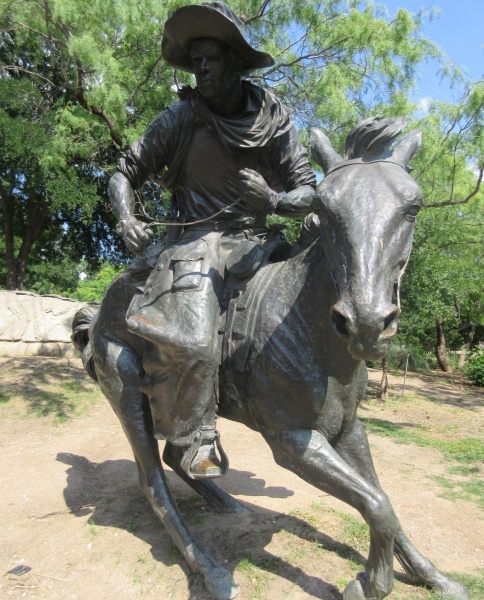 Another cowboy, this one riding hard, on the cattle drive. 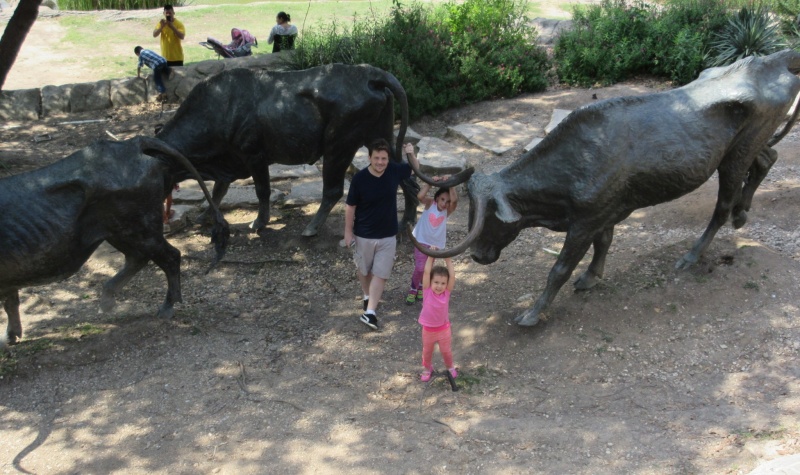 No matter the time of day — or night — there are people visiting Pioneer Plaza Cattle Drive.  Here, in fact, our granddaughters Lindsay Offenburger, 7, and Casey Offenburger, 4, hang from a steer’s horns, under the somewhat watchful eye of their dad Andrew Offenburger. 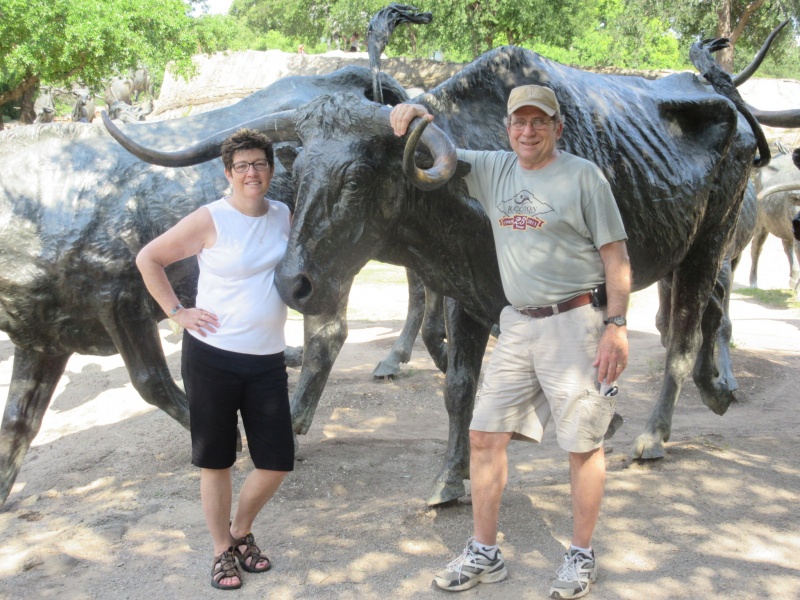 Carla Offenburger and I up-close with the Texas longhorns in the cattle drive.