Last Saturday evening, Oct. 22, my Shenandoah High School classmate Denny Howard – one of my best friends since we were about five years old – was inducted into KMA radio’s Sports Hall of Fame in a ceremony here in our ol’ hometown. 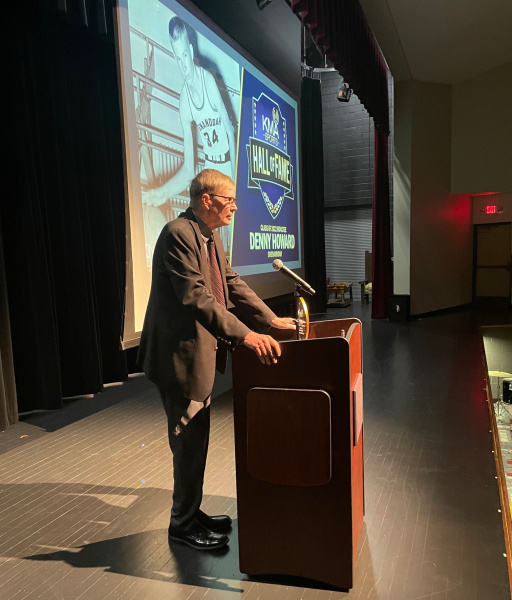 Denny Howard in his remarks after being inducted into the KMA radio Sports Hall of Fame.

He asked that I come home to introduce him to the big crowd in the SHS auditorium, and I think I was as pleased to do that as he was to receive the honor for his long-ago outstanding high school basketball career.

Howard, who owned most of the Mustangs’ scoring records for 50 years or longer, was a two-time All-State selection, a three-time all-conference selection in the old Hawkeye Seven.  That helped him win a full-ride scholarship to Colorado State University, where he played three years before opting to finish his last two years of eligibility closer to home at old Tarkio College in northwest Missouri.

He taught and coached at the high school at Northeast of Goose Lake in eastern Iowa, then back in southwest Iowa at Nishna Valley.  Then he joined his parents Jim and Gladys Howard in running their Howard Clothing & Sporting Goods in Shenandoah.  Until Denny closed the store and sold the building at his retirement in 2021, the family operated it for an amazing 69 years.

First Jim Howard, and then Denny, spent much of their time on the road – calling on schools in the corners of three states to sell them sports equipment, uniforms and supplies.  Plus, the store on main street in Shenandoah served like a sports hub for the whole region, with many coaches and athletes hanging out there on Saturday mornings.  And it seems like Denny has served as a scorekeeper, timekeeper or other bench official for decades at SHS games.

If you’re at all a sports fan in Iowa, you know that KMA radio has long been known for its outstanding coverage of high school athletics – and actually all other school activities.  I think the station started broadcasting prep games in the late 1930s or early ’40s.

There’ve probably been two dozen different sports broadcasters at the station in that time, and I’ve known all of them since the mid-1950s.  In my view, current sports director Derek Martin – who’s been at KMA for 14 years – is the best of them.

He is amazingly dedicated to the local sports scene, doing play-by-play, features, blogging and more, six or seven days a week, both on the air and online.

It was his idea to create the KMA Sports Hall of Fame, and this year’s class of inductees was the seventh.  Because high school competition in the three-state area has been going on for about 125 years, each class includes a few old timers as well as most recent and familiar stars, coaches and other contributors. This year’s inductees included 11 individuals and seven championship teams, ranging in age from their mid-20s up to their mid-80s – and then there were a few honored posthumously, too. 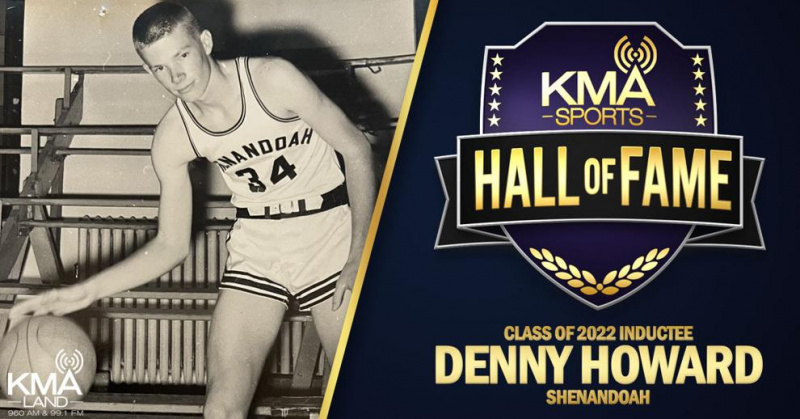 In my introduction of Howard, I told the crowd I can clearly remember the first time he got in a varsity basketball game for SHS.  That was in about February of 1962, when late in his freshman season, he was elevated to the varsity squad.

In a tournament game at Sidney against Glenwood, he checked into a game for the first time.  He quickly hit the first of what would become hundreds of long-range jump shots in his career. On the Mustangs’ next trip down the floor, Howard got the ball on the wing, broke to the middle and drove for the basket – doing a “rock-the-cradle” before hitting a lay-up.

The fans went wild, and I can recall the KMA play-by-play broadcaster, sitting a row behind me, yelling, “Listen to this crowd roaring for young Howard!”  It was the first of hundreds of times there’d be roars for Howard.

I know and remember all that because Denny’s first year as a varsity player was also my first year as the boy sportswriter of the old Evening Sentinel newspaper in Shenandoah, and I was covering all those games.  And we were teammates in baseball the next four years – he the rangy shortstop, me the catcher.

Our SHS teams – in all sports – were pretty good in our freshman year, awful in our sophomore year when we were in the starting line-ups against older players from the other schools, then darned good in our junior and senior years.  Denny Howard was a pivotal player in our high school’s sports turn-around back then.

Then he went on to become a very successful college player, teacher, coach, entrepreneur in business, husband, father and grandfather.

And I’ve been proud to help tell his story – now in eight decades.

You can comment on this column using the handy form below, or write the author directly by email at chuck@offenburger.com.

3 thoughts on “Saluting Denny Howard, my friend for 70 years, a Hall of Famer in hoops, business & life, too!”